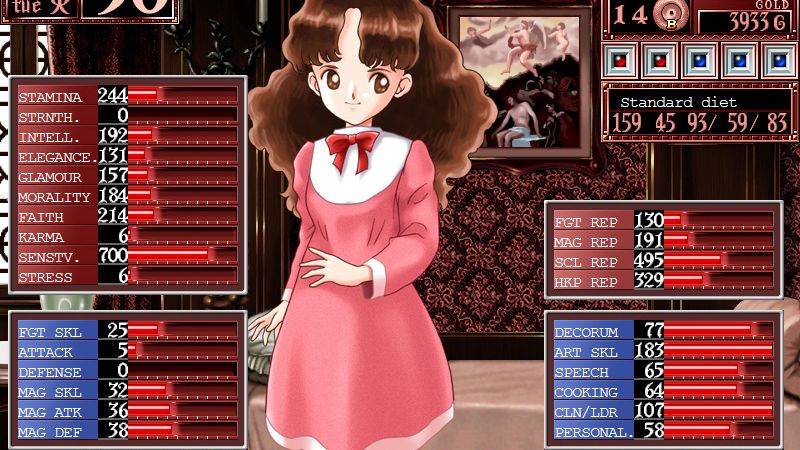 When I sat down to do my first of these Have You Playeds, I was really annoyed because Brendy had done a bunch of the games I wanted to do - ‘cos I thought they were niche and would make me look cool. I basically considered this an act of preemptive war on his part. Hold onto your butt, Brendan, if that even is your real name, because I’m coming out violently swinging with Princess Maker 2.

The Princess Maker series is currently on number 5, but not all of them have been translated, and PM2 holds a special place in my heart from the collaborative playthroughs done on a fan fiction forum I was on in the early 00s (do not ask for further glimpses of my sordid past).

In this one, you’re a hero living off a special state pension after vanquishing Lucifon the Prince of Darkness (geddit?). One night a god appears to you and gives you a child. You must raise this baby girl to the age of 18, at which point her fate is decided. You set your adoptive daughter to different tasks throughout her life that will, at the end, determine said fate. Her destiny is based on your decisions e.g. whether you made her get a job, made her practise certain hobbies, paid for certain lessons, if she met certain people… Princess Maker 2 is, honestly, very hard.

There are, I believe, 66 endings for your daughter, each depending on an incredibly specific mix of stats and life events, and they are all ridiculous. It was released in the early 90s by a company that also produces anime, which accounts for endings like Refined Harlot and Bondage Queen. But there’s also both Farmer and Farmer’s Wife, Grave Keeper, Con Artist, Chef… even Generic Marriage. So, a burn on getting married there, I guess.

You can play the classic 90s DOS version for free on sites like classicreload.com (if you were an unscrupulous rake, obviously), but there’s also an updated version with some redrawn art and such on Steam as Princess Maker 2 Refine. Prove that you would make an abjectly terrible parent today!