Ostriv is a Ukrainian town building game set in the early 1700s. If I tell you how it works, it will sound like every other city builder, and that would do this delightful game a disservice.

So instead, I'm going to show you what happens when you tell your little villagers to build a house.

Starting out is simple. You choose a map, place a camp, and a dozen tents appear around a well and campfire. Villagers will amble out of them, and you can either watch them sit around until they start dying, or choose to place some buildings instead. It's very open ended like that.

Settlers will take up jobs when you create vacancies at the relevant buildings, and at the beginning there's some juggling back and forth as you rush to house everyone before winter using your limited supplies. Building houses over and over again is often an early, tedious chore in these games, and Ostriv sort of makes it worse by making the stock house quite expensive and slow to build, especially nine times. Fortunately though, the way they're built is so lovely I could watch it all day.

First, someone will pick up cart from the starter camp, and load it up with wood, nails, thatch, or clay, from either the camp itself or the relevant production site. They'll wheel it over to the spot you've set out for the house, unload the cart, then head back, leaving a charmingly neat little pile of stuff for the builders.

Then your builders will amble over, and this is where I fell in love. They'll build a little square foundation: 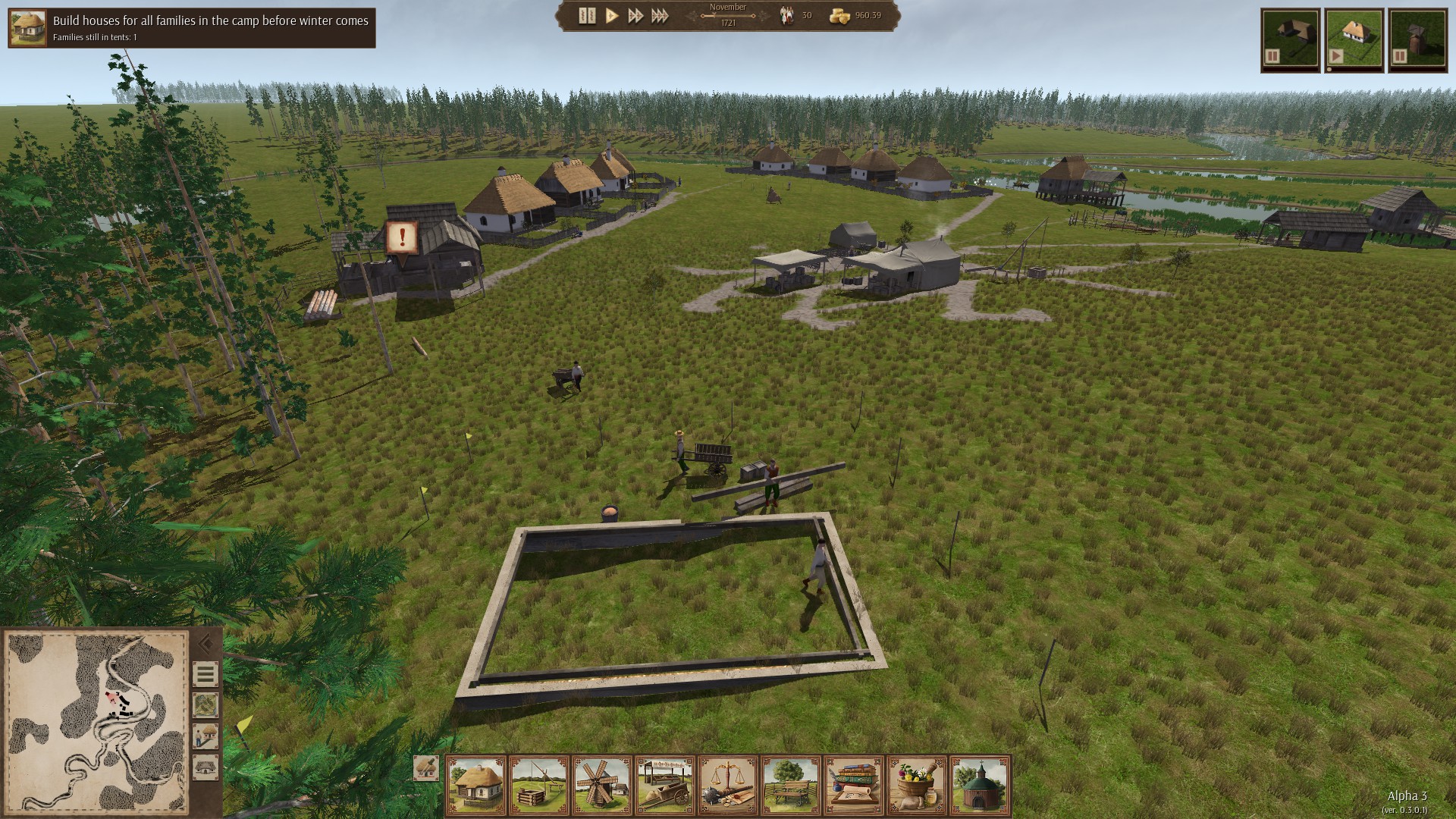 Then they'll pick up wood and nails from the pile, and carry each beam over to the foundation before knocking it into place. It's a small thing and yet unspeakably lovely. Everything is built not by going through three or four basic model changes, nor being painted upwards Settlers-style, but piece by piece, with each beam, arch, and section of thatch individually applied right in front of you.

It happens in reverse, too. I ran low on nails with my smithy still to be built, so chose to demolish the in-progress farm (I prioritised fishing in the first year, reasoning that it would be faster). It doesn't explode or tip over or burn down. Your builders come over and systematically take it apart again, piece by piece, until all that's left is another little heap of wood, crates, and bundles (you can pause demolition partway through if you only needed some of the resources for an emergency, as I did).

Once the wall's frame is done, wall panels follow very quickly, and the clay is splatted into a chimney shape. Then the roof truss goes up.

The last bit is the one real exception, as thatch goes up in more typical game fashion, each bundle adding a stripe of straw. It happens so fast that I missed it this time, but all this was the work of one person, incredibly. Games! I also missed another detail, and watched several builds before I noticed one of the men carries a little set of steps for the front porch aaaahhhhh oh my god.

And then we're done! The house's outside details warp in, and the workers go home... but whose house is it? Well. It's the hermit house, naturally. I've built a line of cottages on the river front, and another one curving around from the forestry. And just as Alice Bee designed a wonderful Sims 4 getaway for me, the villagers have gladly built a home for their local loners.

This cottage stands apart from the others, and I've no doubt horrible civilisation will spread its curse too close before long. But for now, it will be a happy home. As a finishing touch I plant a few birch trees outside, but they'll take a long while to mature.

It happens with other buildings, too! Here's the boatyard my people built early on when I realised they were too snobby to fish without boats.

They put down little log piles in the wateeeerrr, ahhh.

Ahem. The exact process naturally differs a little for building on the river, but it's nothing my stoic wee henchmen can't handle.

And off it goes, to defeat the evil fish menace. That's food sorted then. And most of the houses are done and look loooooook the game gradually wears natural paths in the grass when your people walk over it too often.

Speaking of houses, although I've only got access to one type of house, there are actually several slightly different models, based entirely on the whims of your builders. "You're like, not the boss of us, Sin," they seem to say. "We'll build it but we'll do it the way we want to. Go play your space games, nerd, we have real work to do."

Well, to hell with them. Back to the hermitage, where I get to show you that when the building's done, there's still one more task: the little man who lives there heads back from the lumber yard where he works, picks up a cart... 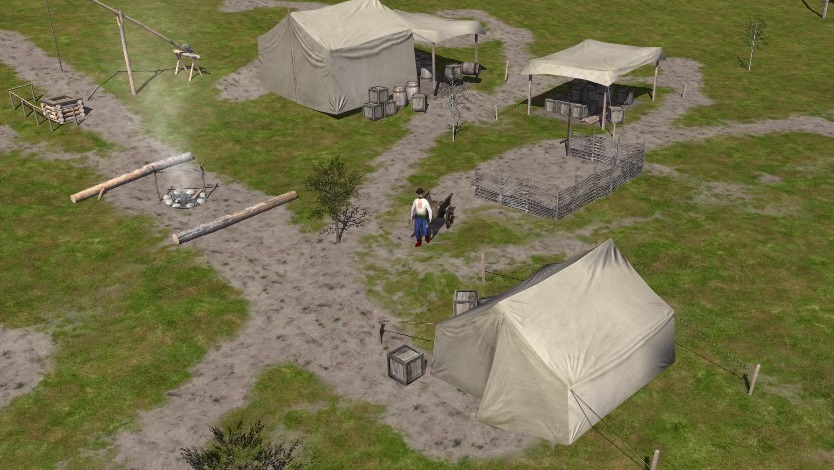 ... and takes down the tent he arrived in. He wheels his stuff to his family's new home. 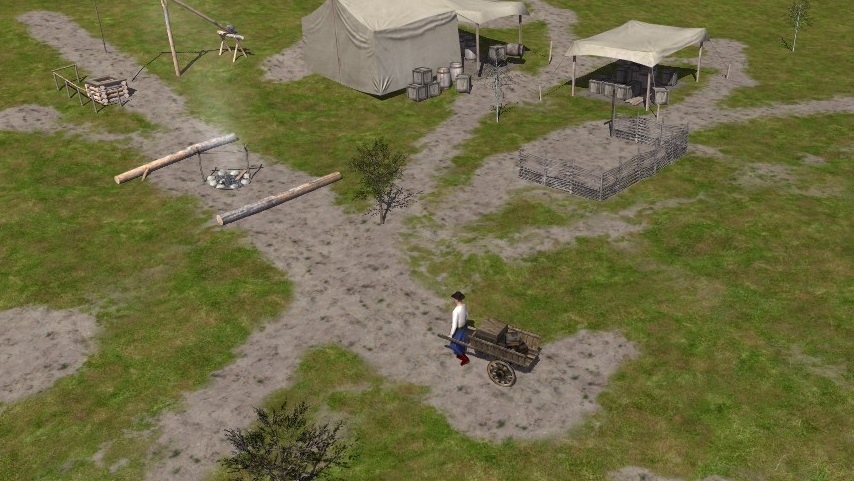 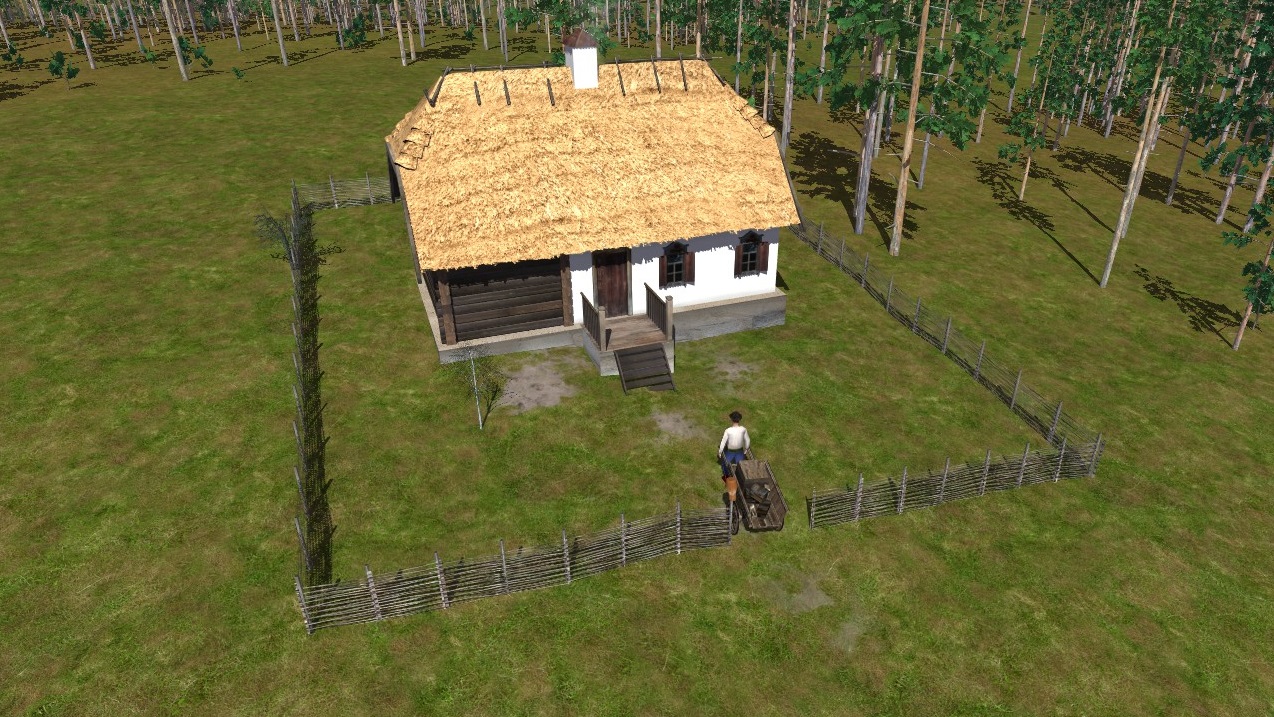 And then, because hermits are good and socially-minded people regardless of what horrible normals tell you, he walks back to down to return the cart. 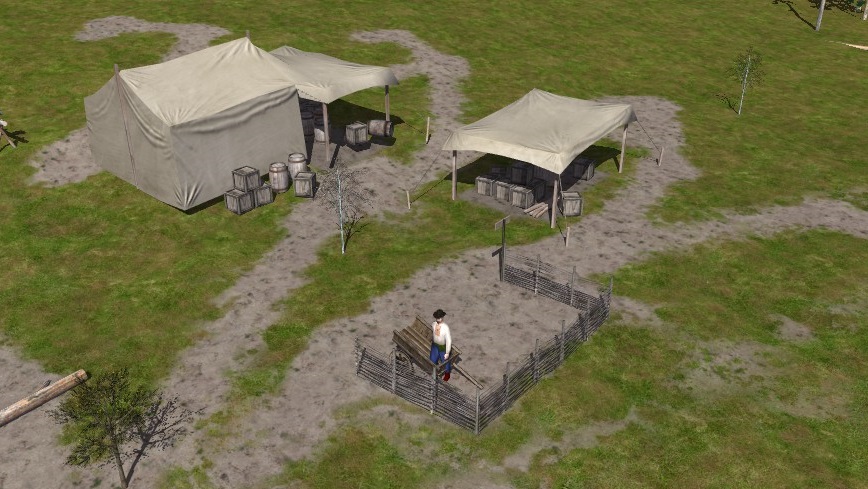 And just in time too, because it's late November and the snow comes down hard, transforming the town into an icy enclave. But everyone's safely holed up in their houses, with thin trails of smoke from every chimney as they take a brief rest to, I assume, eat nothing but fish for three months. Let them hate, so long as they fear. 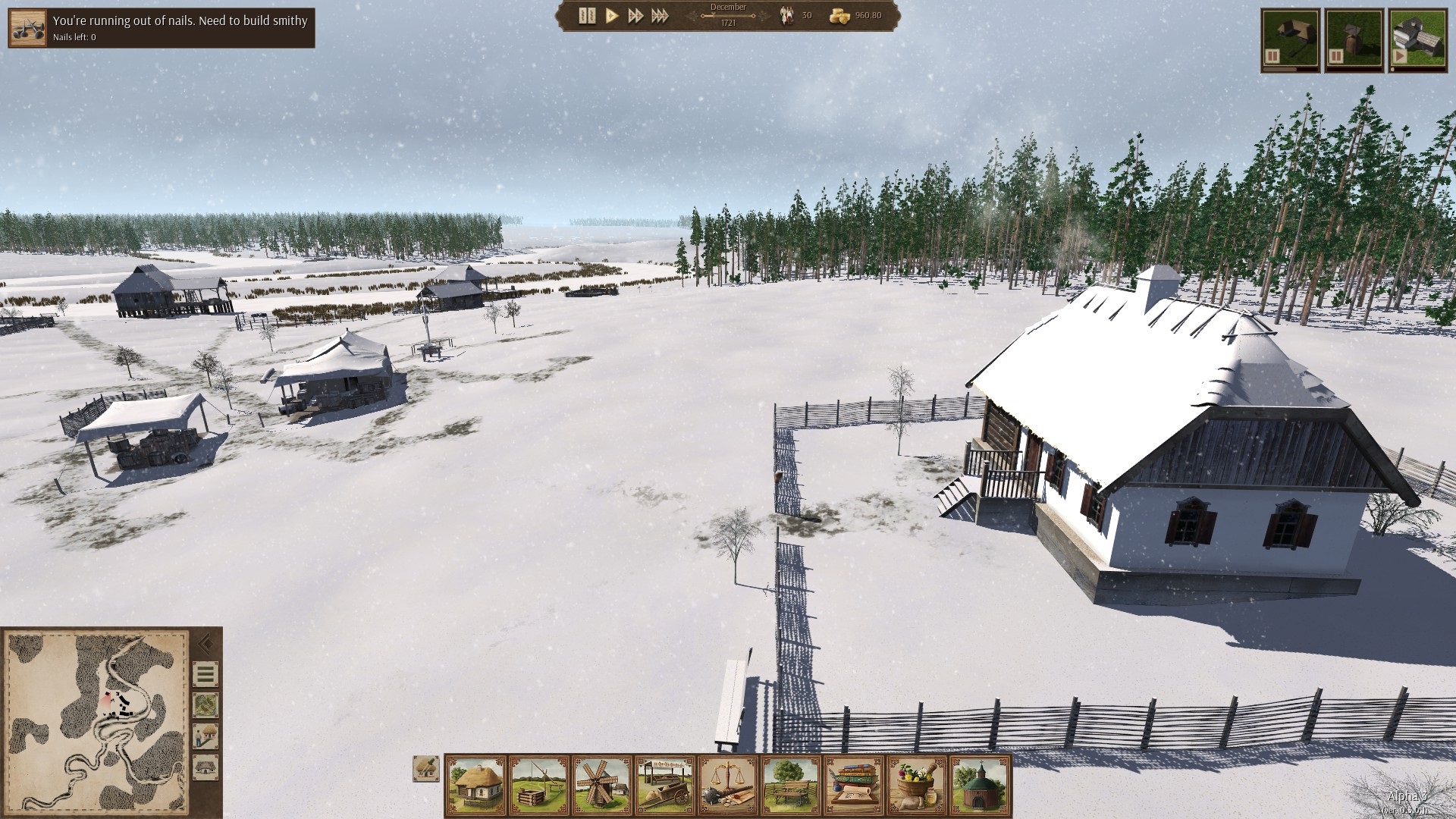 The river freezes and agriculture stops. Construction is held up by a shortage of nails, which the smithy will slowly solve over the winter. I've not checked in on the lumberjacks, who reveal another detail: the villagers put on fur coats and little ushankas for the winter. And if you look closely you can see that the areas under the lumber yard's awning are only dusted with snow, not coated like the other surfaces.

Come Spring, there are more wonderful little touches, as the snow gradually melts. 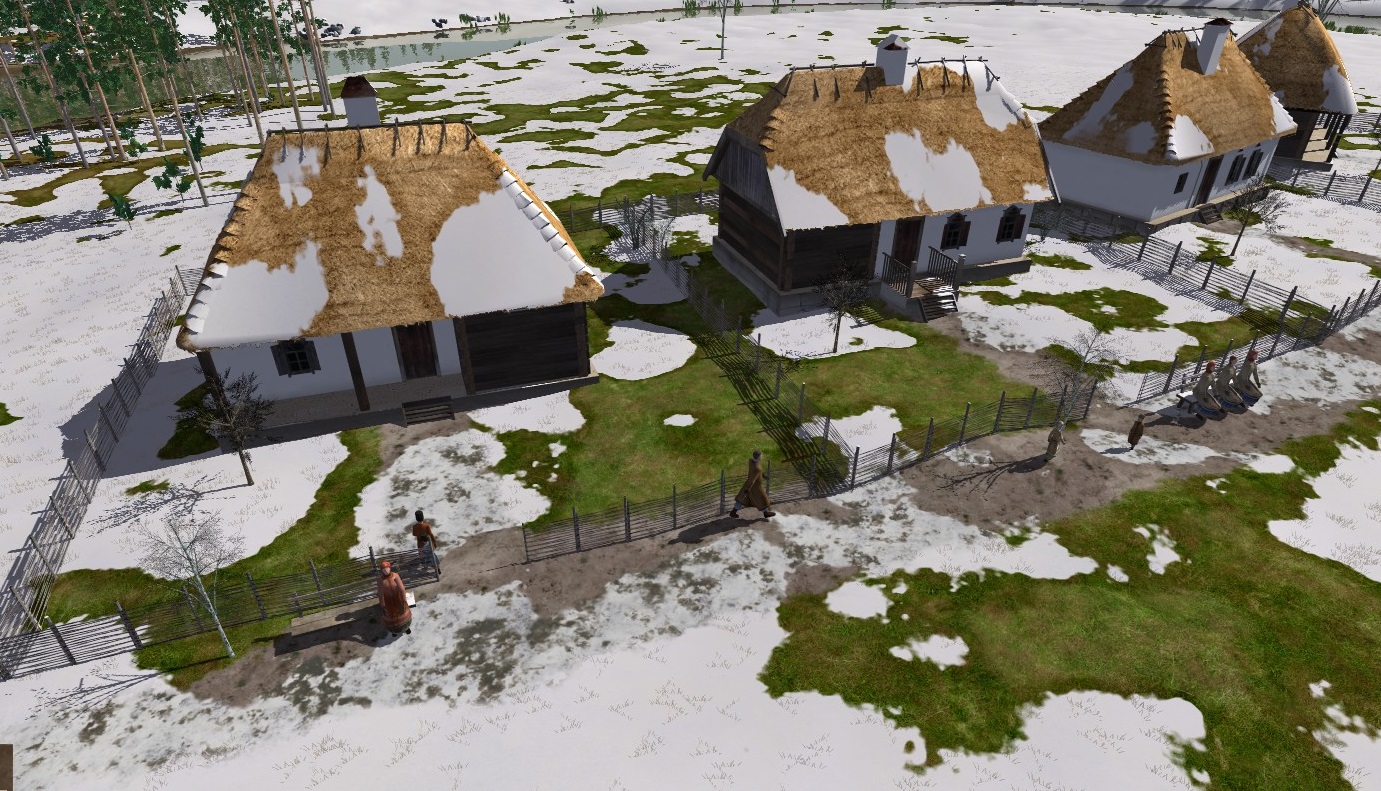 While every other house has a well-worn path to town, the only path around the hermitage is... to the back of the house, where I built them an extra bench. There are many benches about town because I am a thoughtful and benevolent Overseer. Three people can sit on a bench, but the couple in this house still consistently choose to sit on separate benches with their backs to each other at opposite ends of their house. I love them with all my heart.

As the village comes back to life for the new year, my favourite villagers continue their quiet vigil, wishing health and comfort to all, and bothering no-one. Let's leave them there.

Ostriv is available now via Steam Early Access, Gog, or the developer's website. The latter works via Humble, and promises "a downloadable DRM-free copy of the game and life-long subscription for all future updates, including a Steam/GOG key".