"I've discovered that sexual reproduction in Vilmonic is extremely difficult."

Victoria wasn't happy with her fungaloids. She'd combined the genes from two mushrooms, but the results were disappointing: no matter what she tried, the results were mostly "non-viable life forms." Little did Victoria know that the next day, not only would those fungi be flourishing - she'd have written her name in their D.N.A.

I'm not very good at Vilmonic. The artificial life sim launched last month, tasking players with rearing creatures that multiply and evolve. You're supposed to nurture and protect them, to experiment with varied ecosystems that distil desirable traits. I could barely figure out how to till some soil.

But this isn't a story about me. This is a story about Victoria, a researcher who delved beyond behavioural experiments and into the genetic makeup of her creatures. To understand what that means, we're going to have to do the same.

Every life-form in Vilmonic has its own D.N.A, existing as simple blocks of colour within an image file. They're easy to access, but very hard to parse: when Victoria started her work, genetics remained largely a mystery. When I spoke to Victoria about her research, she told me her "greatest discovery in Vilmonic was deciphering the genome". 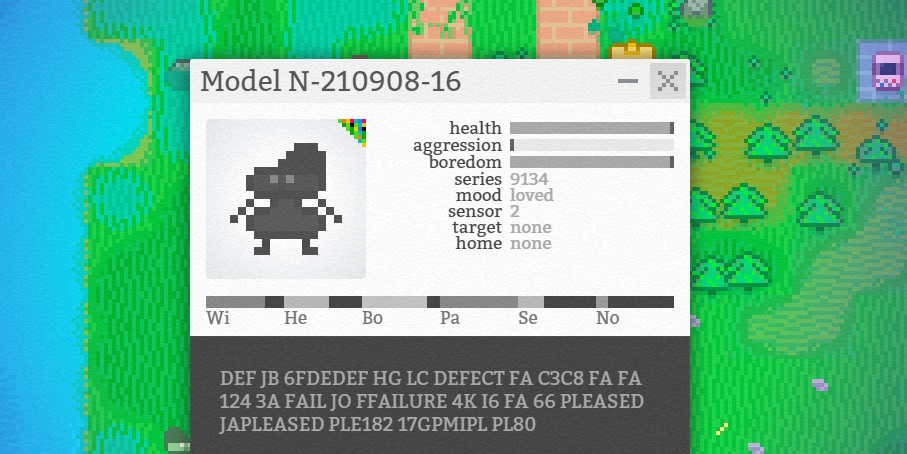 It was in its fledgling stages, but a community had started to form on the game's discord server. "CaptainXander" had done some groundwork, seemingly identifying the pixels that corresponded to how quickly mushrooms ripened. Problem was, the exact nutrients found in soil spots varied, and the scientists struggled to replicate each other's findings.

Enter Victoria. Most of the research so far had been done on fungaloids - but Victoria had her sights set on more complex life. She set about investigating animids - full blown creatures with twice as much D.N.A as fungaloids, and many more times the complexity. At first, every change resulted in a carcass.

It was a far cry from the burgeoning (GMO-free) world she'd created before, which affected her in ways she didn't expect: "What surprised me in Vilmonic was how it felt making a large map, seeing that diverse traits emerged depending on environment. It felt like I was watching something ancient growing, before primates." But Victoria wasn't content to just sit back and watch.

"I wanted to identify genes that controlled differences in an anim's scent preference, and if I could, it's sensory perception", Victoria reported - "I found two anims and compared their genes, noting their differences." Within a day, she'd succeeded. 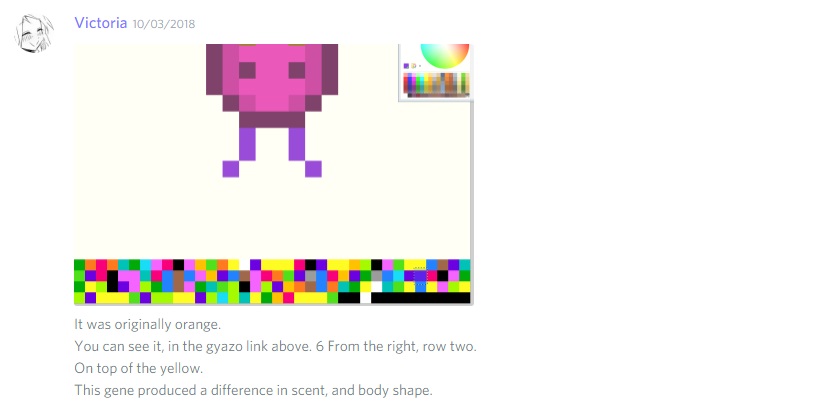 Off the back of her "first notable result", she created 13 different specimens - every one with a different colour block in the sequence she'd located. A hypothesis formed, and was seemingly confirmed: modifying a certain section of D.N.A with colours containing blue reduced an organism's scent response when hungry. 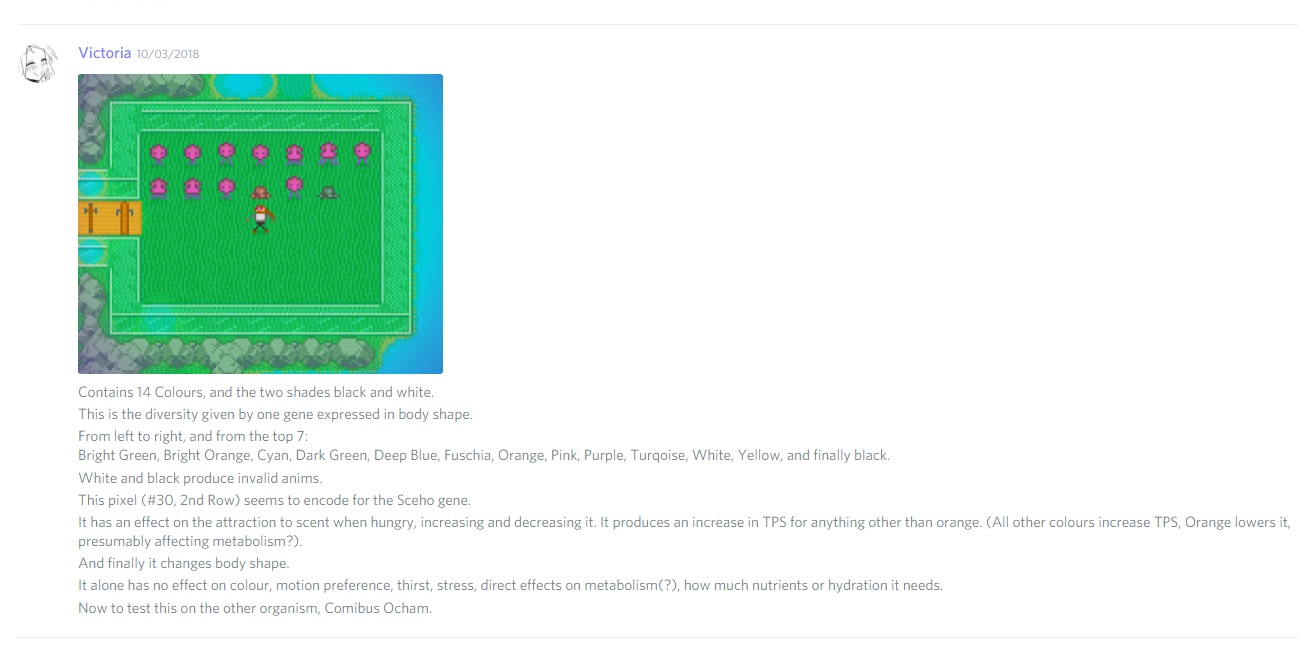 It was a start, but a smaller step than Victoria had hoped. After numerous experiments, she came to a confounding conclusion: "changing one gene to be similar can produce drastically different results depending on the genes of the receiving anim." It wasn't simply a case of certain gene locations governing certain characteristics - the code needed to be examined holistically.

Undaunted, Victoria changed her approach. A series of breakthroughs lead her to identify just 14 genes that every physical characteristic seemed to derive from, alongside five other important conclusions.

"1. The first 9 Pixels don't seen to affect the fungol.
2. The next 14 Pixels appear to be the genes that change it's physical characteristics.
3. The following pixels all determine name letters which are dependent on the species created by the 14 'Important' pixels.
4. Fungol DNA can be read as one continuous sequence.
5. The black space at the end of the fungol serves primarily as a means to tell the game that the fungol 'has no extra letters'. Less black space should translate to longer names.
6. Genes appear to interact based in pairs. With 16^2 Combinations each."

It wasn't long before she'd created a fungaloid with the minimum number of genes required for life - remarkably, a mere three pixels. 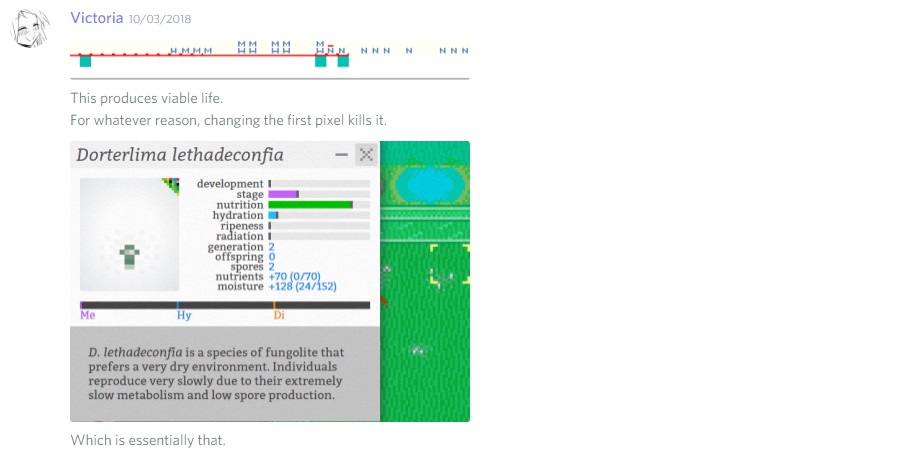 Victoria abandoned the advantages of studies with so few variables, though, when she get interested in babies. The game's solo dev, Mark “Bludegonsoft” Stramaglia, popped up with a research direction: "Has anyone tried doing crossover with the genes? Seems you could achieve a kind of GMO-sexual-reproduction that way..."

Vic was already on it. She set about transplanting a set of chromosomes from two soon-to-be fungi-mums - and discovered something akin to recessive and dominant genes. The code from both parents was in their offspring, but one seemed to override the other. Nevertheless, fertile fungi-sons soon emerged.

So did new curiosities. Based on repeating sections of parent and child D.N.A, Victoria figured out that the back half of every anim's D.N.A spelled out their species name. 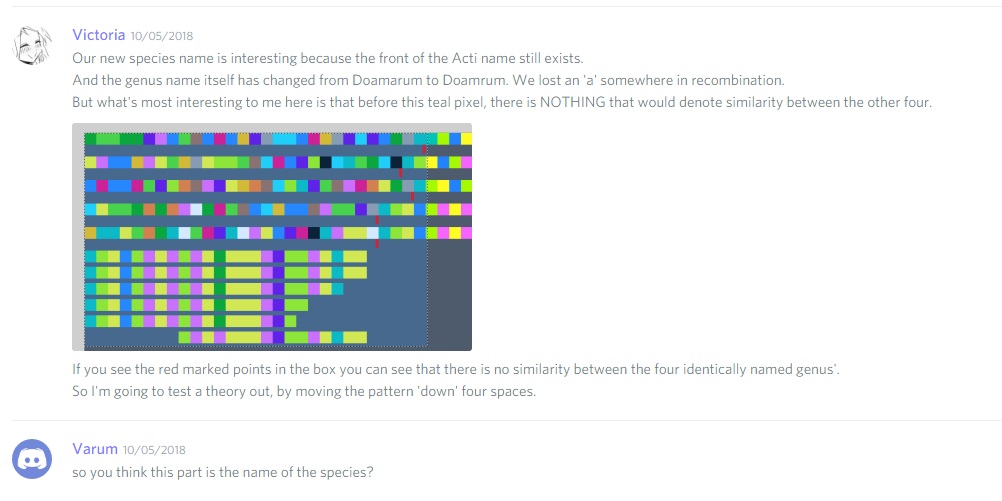 By moving the relevant pixels four spaces back, Victoria deleted two letters from the genus name. Now she knew that every letter was coded by two pixels - and she suspected she knew which ones. In a series of posts to the Discord server, she demonstrated her newfound powers. 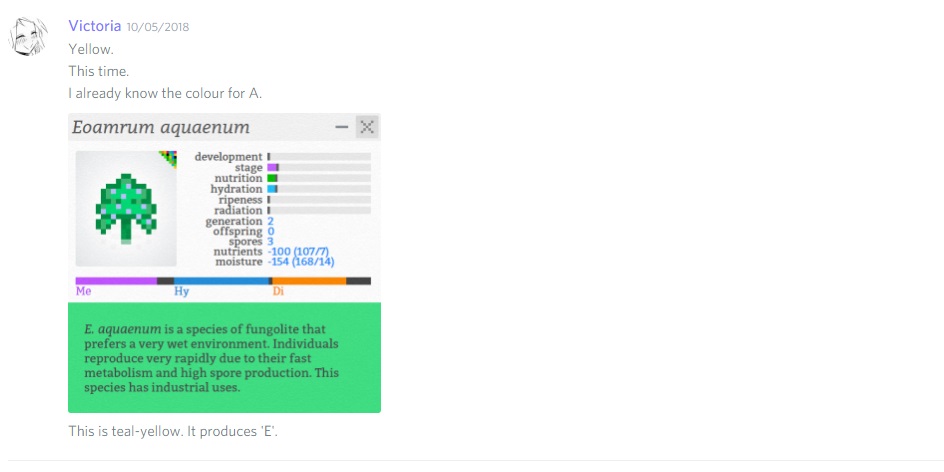 A compilation of Vilmonic's genetic language followed, with the colours for every letter in the alphabet revealed. As all great scientists are wont to do, she attached her name to her discovery. 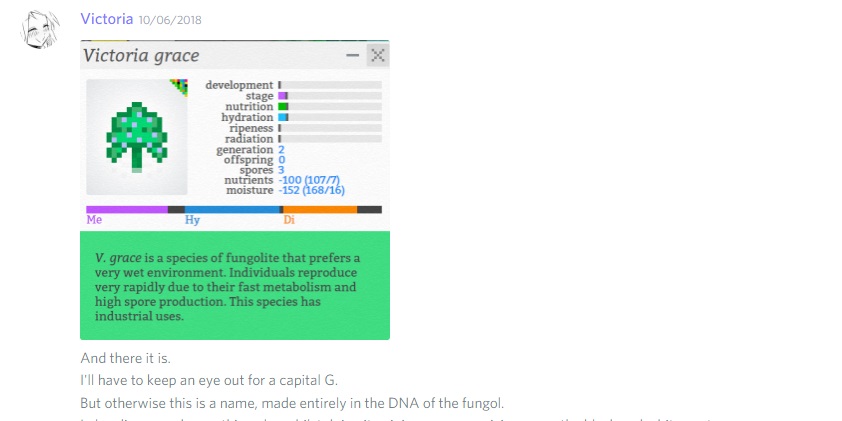 But Victoria wasn't done. Compiling that code had revealed something else, of even greater significance. Certain sections of D.N.A were 'enclosed': written between pixels of brown, black, white, and grey. Colours, it turned out, that all functioned in the same way. Victoria looked at all her fungaloids, and saw exactly three sections of enclosed D.N.A within each of them. She'd found the three 'main' genes, the sections of code that governed each mushroom's principle characteristics.

In a single attempt, she rewrote her newly-named organism to adapt it to an urban environment. She'd spent days studying the lock. Now, she had the keys.

She cut out D.N.A snippets from different fungi, creating chimera mushrooms that she successfully released into the wild. Animids presented more of a challenge, but soon yielded to the principles she'd discovered. 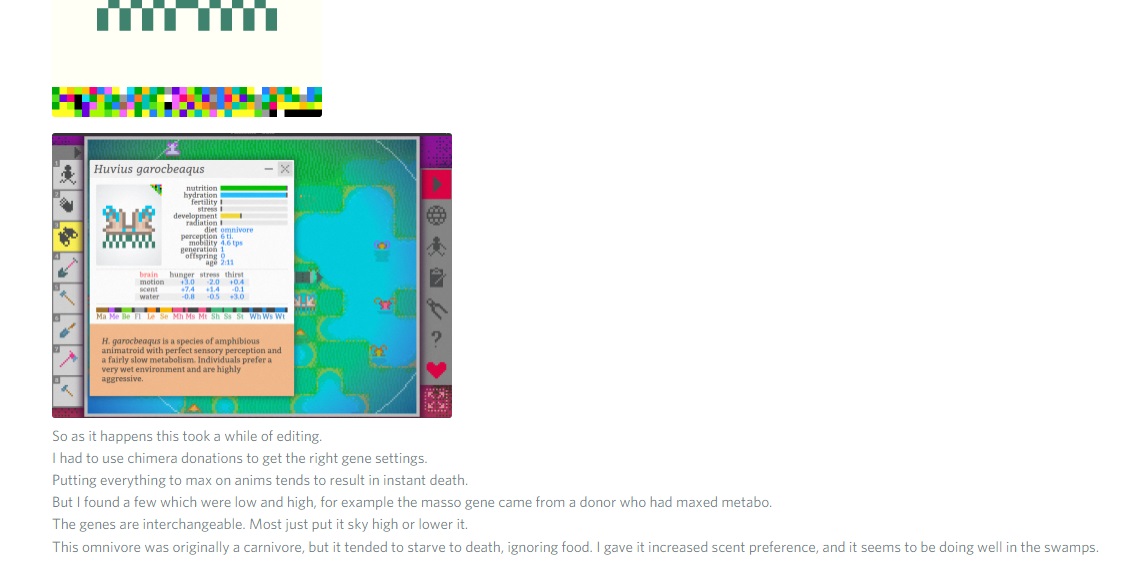 I've not mentioned many of Victoria's experiments, as well as insights from other researchers. Victoria pioneered genetic exploration, but other fields tell other stories - how terrain shapes evolution, how different organisms impact each other's ecosystems.

"Before my experiments", Victoria told me, "no-one seemed to know how anim DNA worked." "After research, making much more specific gene changes was possible - opening up a way to really see how genes matter for anims in different environments." Victoria's work has wide-reaching implications, acting as a touchstone for future studies. It's a fate that mirrors that of her creatures themselves:

"My GMOs are not just surviving, they're thriving."