I have a mystery that will likely never be solved. After my dad died in 2016, one of the more peculiar things I had to do was go through his computer, log him out of everything, and close down various accounts. Which included Steam. Looking in his library on there, there were three games that sat atop his "most played" list, with hundreds of hours clocked up for each. Skyrim, X-COM: UFO Defense, and, er, hidden object game Escape Rosecliff Island. Pardon?

The first two were no surprise. As my dad entered his 60s, he got rather stuck in his gaming ways, frequently returning to those classics for his post-work winding down. But Escape Rosecliff Island? I don't think I'd ever once heard him even mention it. Let alone that he'd been plugging away at this hidden object game for seemingly years. So what was going on there?

I'm no stranger to Rosecliff! In one of my many proud posts on RPS about my fondness for hidden object games, I wrote about this exact entry in SpinTop's collection back in 2009. So could my father have read this one random post, never told me about it, and then become completely hooked on this game? I can't find out. He's not picking up. So I figured I'd play it myself again today to see if there's something more going on in there than I thought. 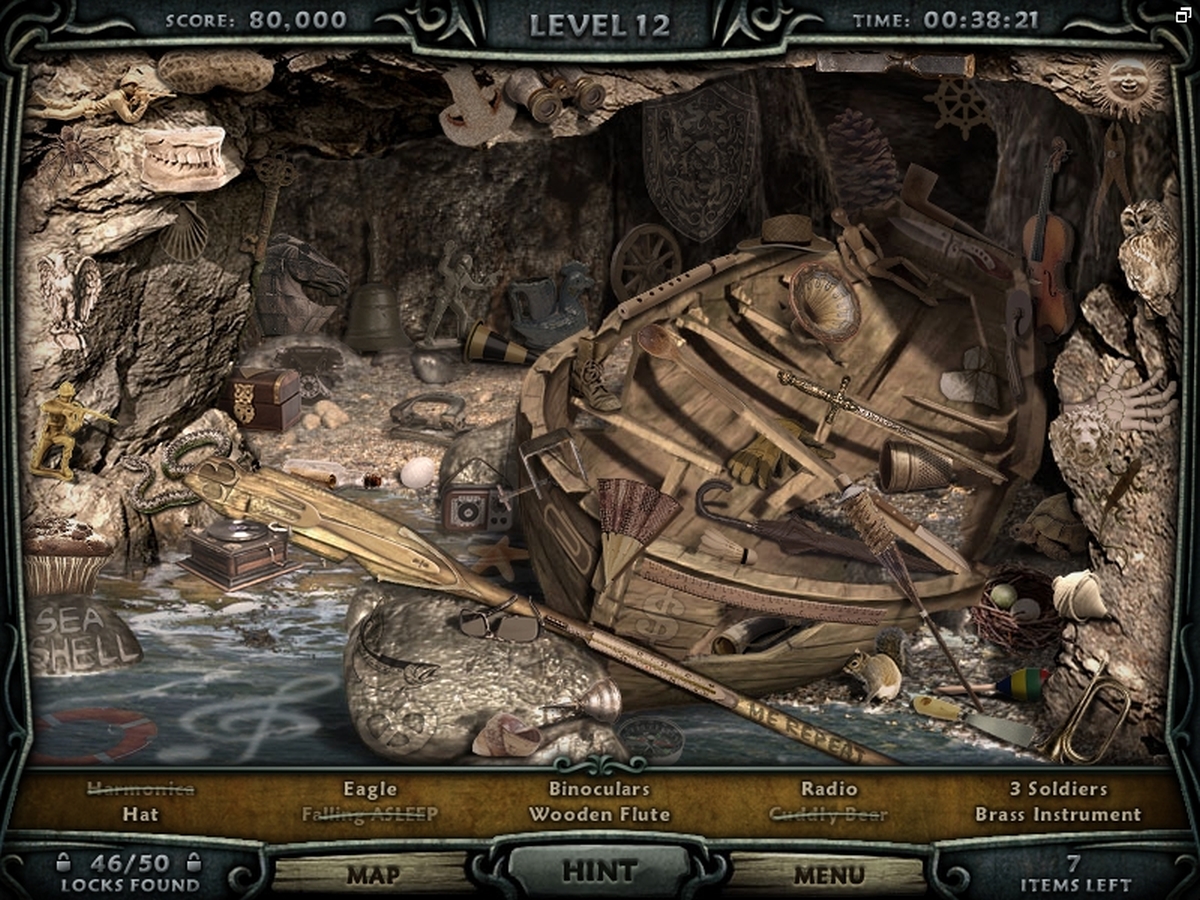 Let's not build up some unnecessary suspense here: there is not. This is, if anything, the platonic hidden object game. Created at a point in that peculiar genre's history where they'd yet to start awkwardly evolving their way into a sort of proto-adventure game, but perhaps showing the first signs of leg buds as it tentatively sniffed the beach, it delivers the core of the formula as straight down the line as you could ever imagine.

If you've never played one, a hidden object game is - in their purest form - a collection of extremely busy mostly static scenes in which hundreds of items are "hidden". You're given a list of ten or so to find in any given screen, and a time limit in which to find them. Done badly, as the genre most often is, this quickly becomes a drearily repetitive chore of finding the same items on the same screens multiple times, as the game forcibly stretches itself out far beyond reason. Done well, as SpinTop were wont to do (there was a reason PopCap bought them as their casual gaming empire grew), and it was a very pleasantly distracting puzzle game in which you squinted at your monitor trying to find where the bloody hell a frog could be hiding in this image of a garage. 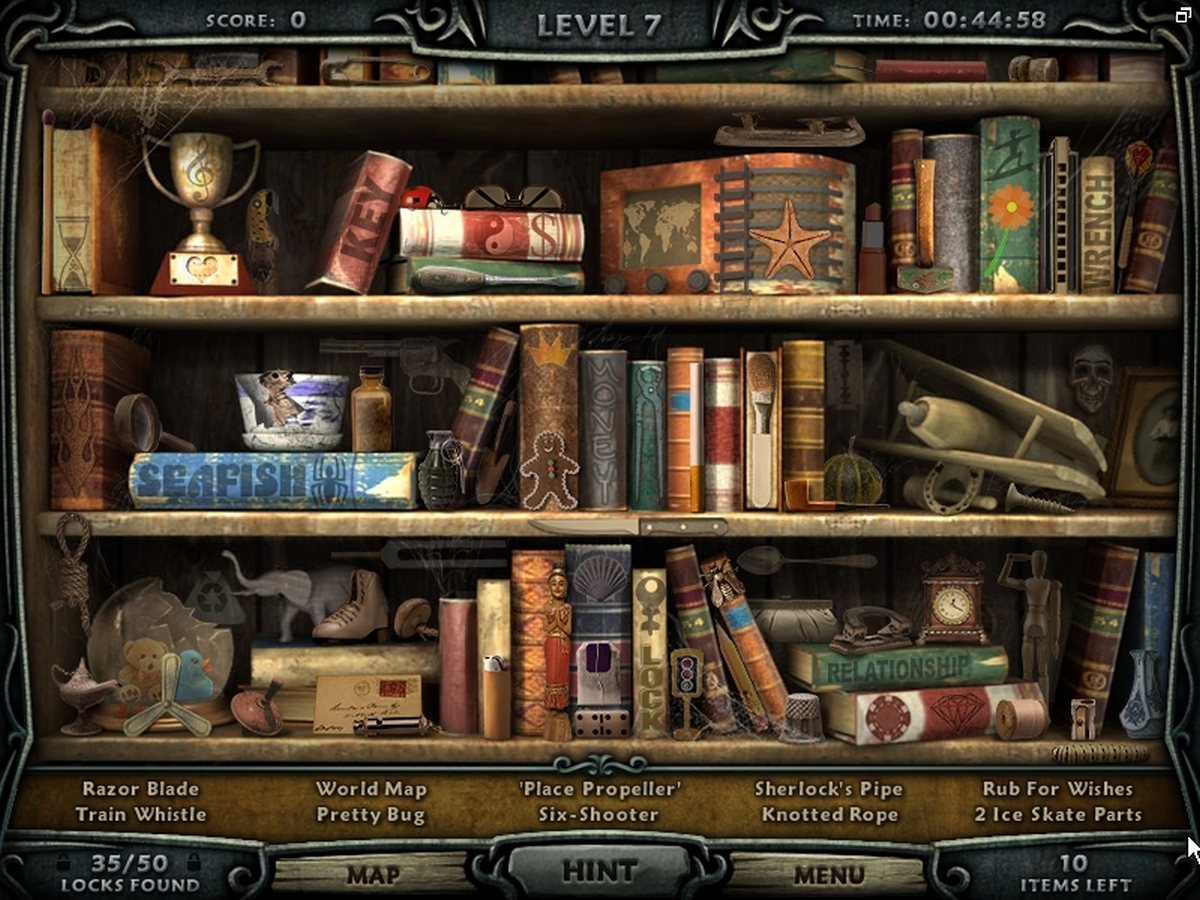 Over the decade or so since SpinTop's reign at the top of the genre, as I mention they've quite significantly moved onward. Nowadays you'll probably get a big old storyline about missing victims of a mad witch, or a young female cop on the hunt for a killer, with vestigial adventure elements crowbarred in, most likely involving crowbars. I still enjoy them. So there. But back in 2009, it was much more straightforward, and Escape Rosecliff Island demonstrates this with aplomb. It insinuates there's a storyline here, but there never actually is. What there is instead is a degree of wit behind its design that makes it still an absolute pleasure to play.

The key is in the hiding. And you can't really appreciate how well SpinTop did it until you've suffered through some of the endless shovel-loads of examples you'll find all over your favourite app store. For instance, let's just study this screen together: 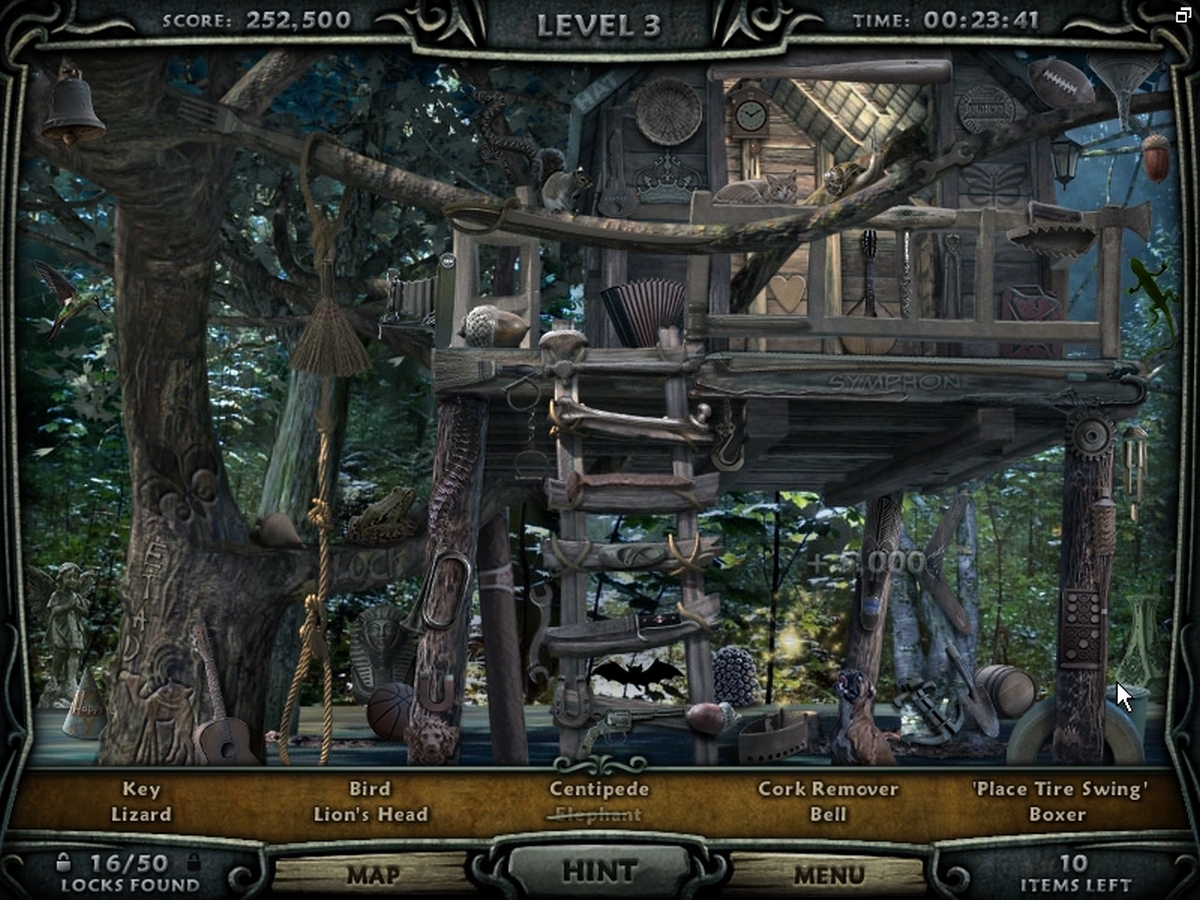 Take a glance and you've got a treehouse in a tree. It's pretty nicely drawn too. Look closer and you have the maddest muddle of items imaginable. Look at that ladder, for instance. From the top down you've got an axe, a femur, a railway spike, a ballet shoe, great big knife, horseshoe, revolver, and acorn. And I'll be my bum you didn't notice one of them when you first looked. Look at every pillar of the treehouse base, every surface of the branches, it's all just absolutely packed. And best of all - and this is where so many copycats got it so wrong - nothing is really where it should be.

Perhaps you could justify that squirrel or the cat, but beyond that? A baseball bat as the top of the doorway? Improbably vast acorns? That enormous dinner fork on the branch, next to the rope attached to a brush? This was what made these games so good: that there was a degree of wit behind the layout. Objects were made hugely bigger than they ought to be, and that made them harder to find! You still haven't noticed the incongruously placed party hat next to the angel statue and the camel at the foot of the tree trunk. And perhaps haven't enjoyed the gag of "SYMPHON" etched into the base of the house. 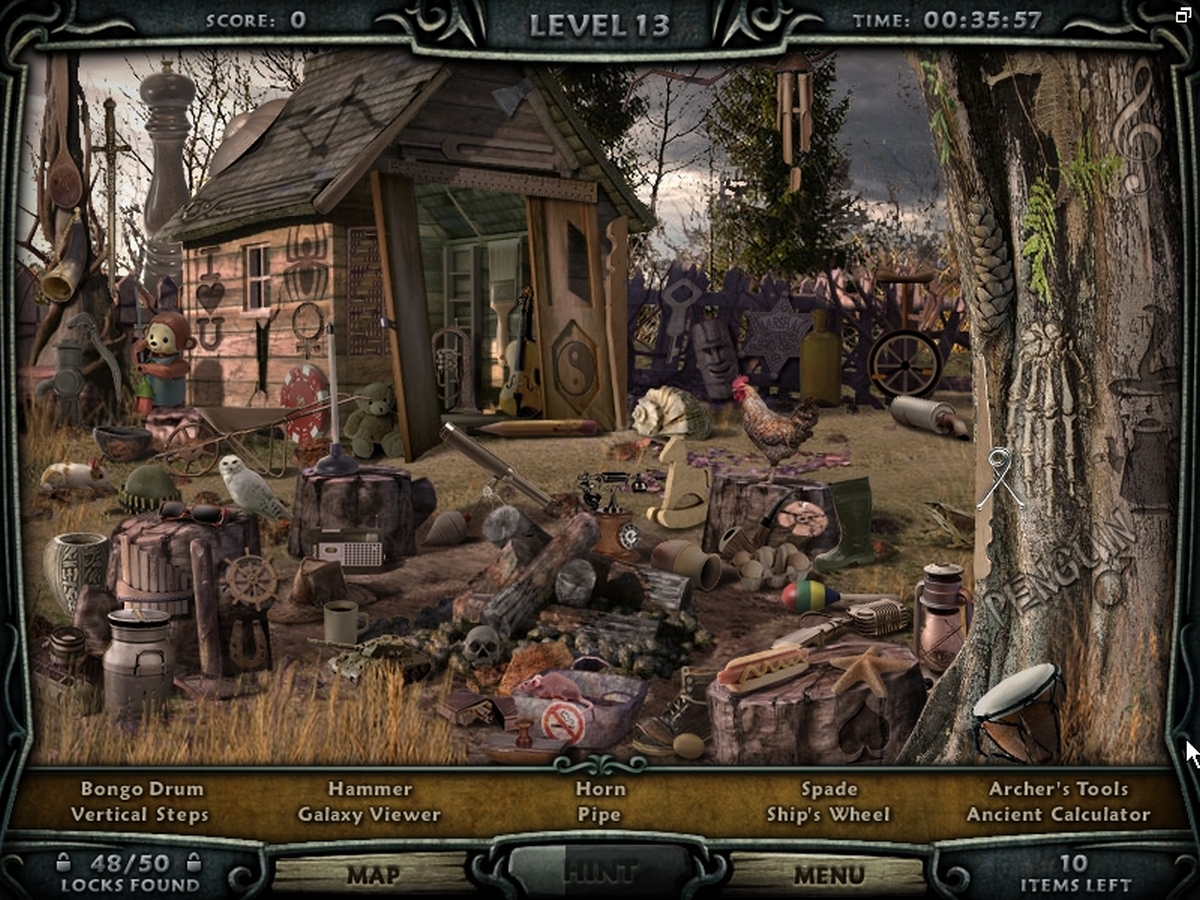 With 25 of these locations in each game, each one returned to over and over but never with the same objects to find twice, there was so much replayability here, certainly. But enough for my dad to have mainlined it alongside the Elder Scrolls?

It was only by playing it today that I think I got somewhere toward a possible explanation. I'm not entirely sure the game ever ends. And if dad felt compelled to actually escape Rosecliff Island as the entirity of the game's narrative suggested he should, then it was likely only death that could have freed him from the task. 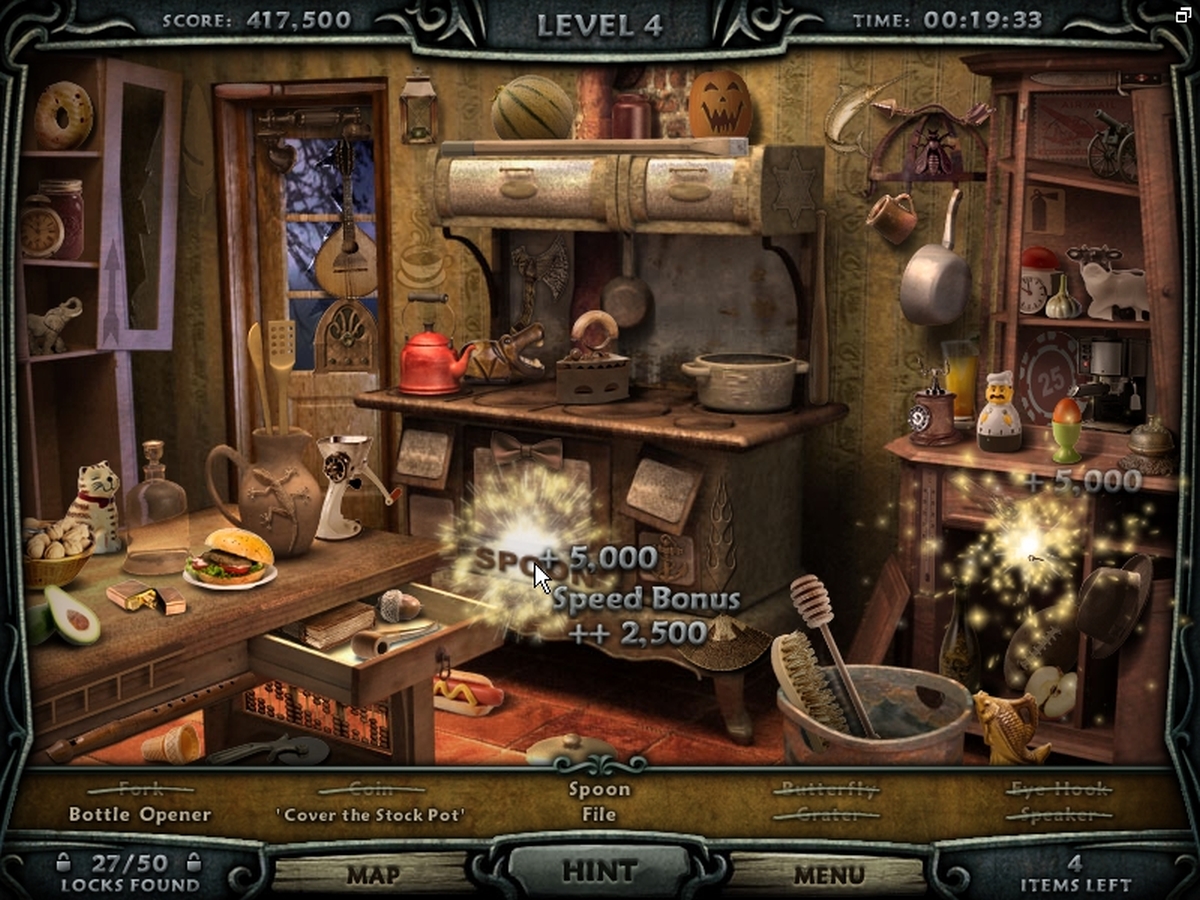 There was a moment this morning where my five-year-old was squatted on my desk, while my games-avoidant wife was slumped on top of me sat in my office chair, as the three of us played it together for a bit. I'd asked them to help me find a candlestick. They ended up staying for an hour, my wife's preternatural ability at these games frankly scaring me and the boy. "There's a screwdriver, there's a fish, that's the radio, the bell's by the chicken, the dog's on that box, there's a feather next to..." We've never ever played a game together as a family before.

After they left, I carried on, and I carried on, and I carried on. I'm writing this far too late in the day because I carried on some more. I completed another five screens, then another four, then six, then four others, each one implying that I'd at some point get to a place where I could escape this damned island. I have not. I fear carrying on to find out if I ever will, lest I too become trapped, like some sort of family curse that I'll be incapable of preventing from passing on to my own son. 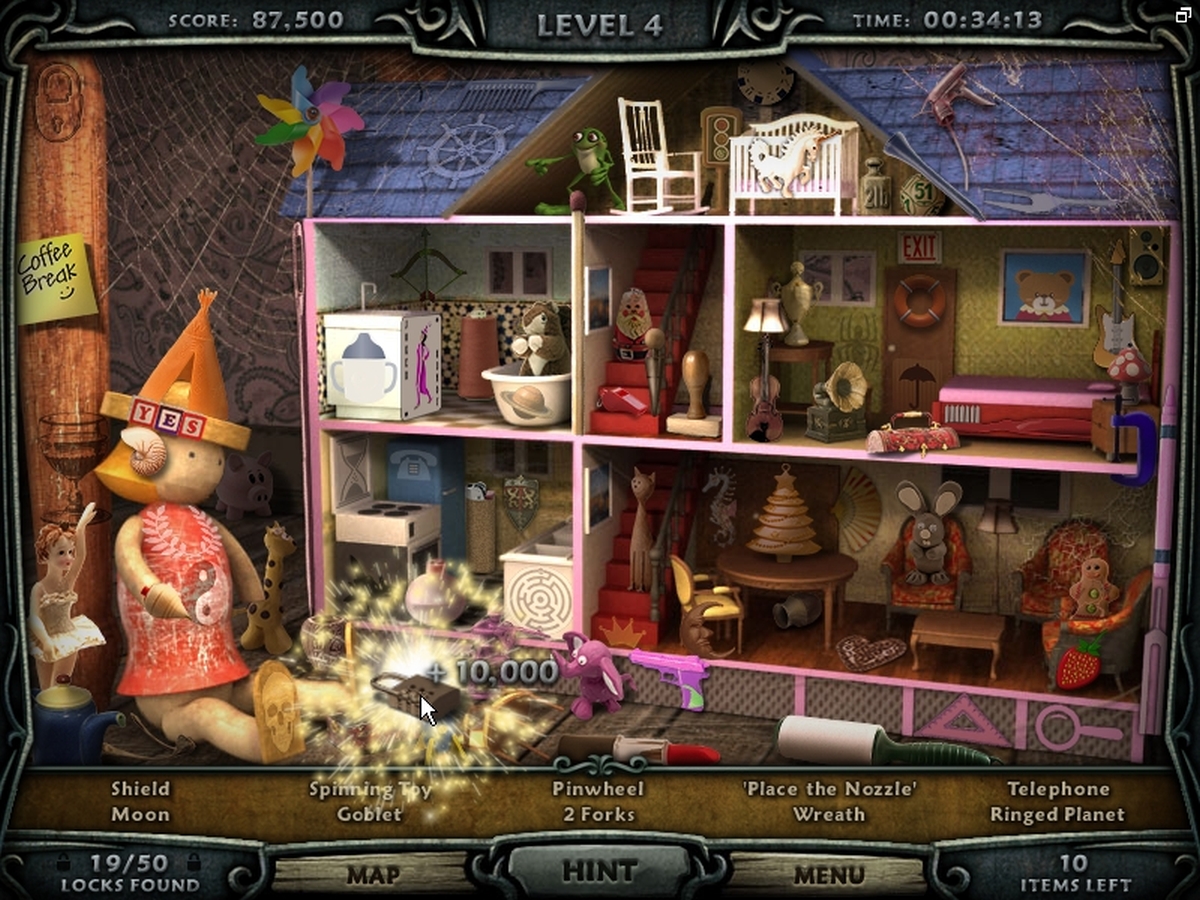 So either dad just really liked this, and ONLY THIS, hidden object game, and for some reason never contemplated downloading another. Or he perhaps left it running in the background one time and then visited the moon without switching off his PC. Or, and I think we can agree this is most likely, was the subject of a rejected Stephen King short story, soon to be made in a direct-to-the-Horror-Channel movie.

Yes, you can. It's still on sale on Steam. However, as appears to be the case with a bunch of these old casual games on Steam, it likely won't load when you first try. It'll say it can't find "steam.dll". This is easily fixed: head to the top level of your Steam directory, and you'll find said file in there. Copy and paste it into this game's directory in \steam\steamapps\common\Escape Rosecliff Island, and it'll be good to go.

As an example of why SpinTop were the best there ever was at hidden object, and for genuinely engaging entertainment, yes, definitely! As a curse that might be passed down for generations, you might want to give it some thought.