It is going to take all of my self-control (Control!) to not just make this 1000 words describing how enamoured I am of just, like, absolutely head-wellying a fire extinguisher down a really long hallway and watching it explode at the other end, if I’m honest.

Oh, very well. I played an hour-long preview chunk of Control, a game where you can theoretically do things other than chucking big red burnstoppers at walls, I suppose.

Control is by Remedy, who done Max Payne, Alan Wake and Quantum Break (no throwing of fire safety equipment using your mind, 0/10 for all three). Brendy and Matt have both seen some of it before. Strangely they did not mention the fire extinguisher thing much. I’ll do a whistlestop tour of the premise anyway: you play Jesse Faden, who has accidentally become the new director of the Bureau Of Control, a shady, off-the-books government agency. As far as I can tell at this early stage, it’s motto would be, like, “The Bureau Of Control: If It’s Weird, It’s Extremely Our Shit.” 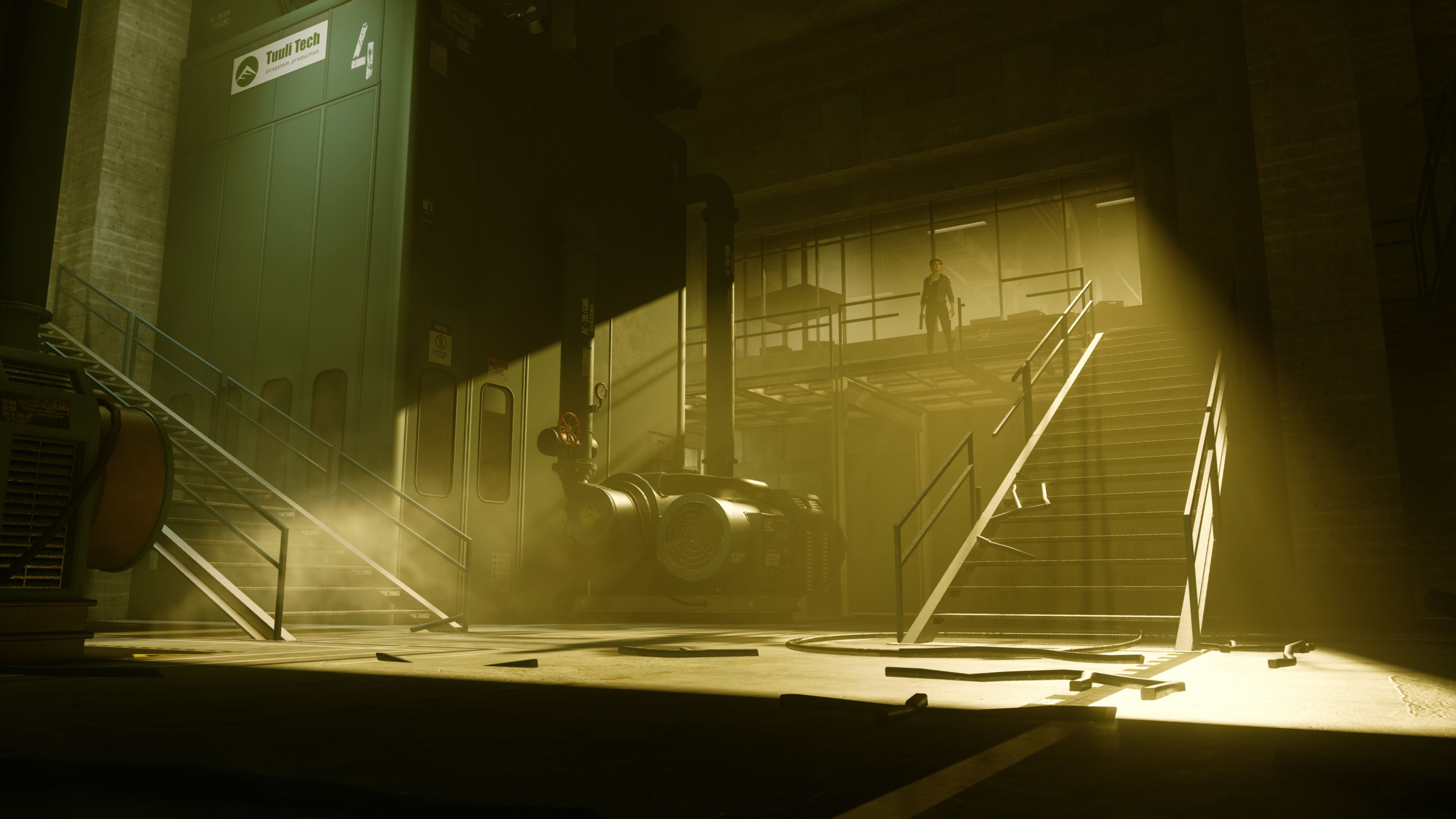 Jesse originally turned up at the offices, known as The Oldest House, looking for her brother (who was taken by the Bureau years ago in a weird shit related incident), but as the game begins all interdimensional hell is also breaking loose. The previous Director is dead, and Jesse picks up the magic shapeshifting gun that decides who the new director will be. Brendy described it once as feeling like imposter syndrome, because Jesse constantly sees recordings of the previous Director describing what the job is. In my demo the head of security assumed Jesse was a randomer, and then started awkwardly calling her ma’am in a way that reminded me of this James Acaster bit.

I asked narrative lead Brooke Maggs if I was reading too much into it, and if, in fact, Jesse was meant to be almost genderless. She explained that Jesse’s gender was important in that it was a contrast to this bureaucratic organisation that has, despite Jesse having several female colleagues, largely been run by men. “It's certainly not the only aspect, but she comes in as a breath of fresh air, she's the first female Director the bureau has ever had,” Maggs said. “She's not trying to be the previous director. She has to figure out what that means for her.” 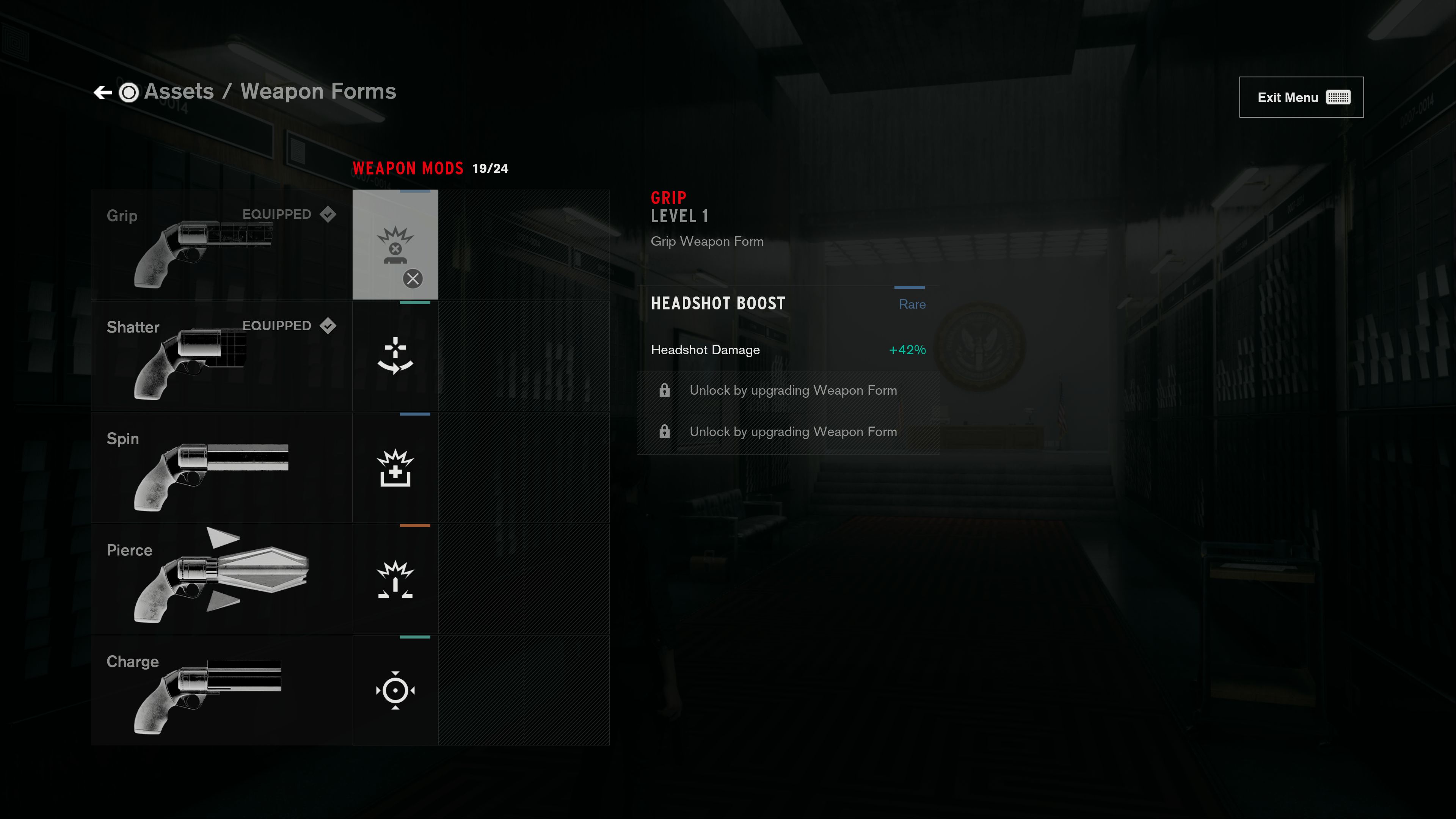 Part of what it means is that everything is now her problem. Principally, this is a weird entity called the Hiss, which is breaking through the walls of reality, rearranging The Oldest House around it and reanimating Bureau agents as lolloping, screeching monsters.

Remedy’s communications director Thomas Puha said that Control is meant to be a challenging game, and that we would all definitely die. I did, but usually from doing something stupid like persistently walking into a room full of angry coral to see if I could survive. You definitely can’t play it as a cover shooter, and the Hiss started introducing some weirder or more unsettling baddies, but as far as the combat went I found it more rad fun than daunting challenge. The shapeshifting gun is one weapon, in theory. Sure, you can shoot lads in the head with it. Sure, you can collect and apply mods to your gun (and Jesse) that give you different buffs. 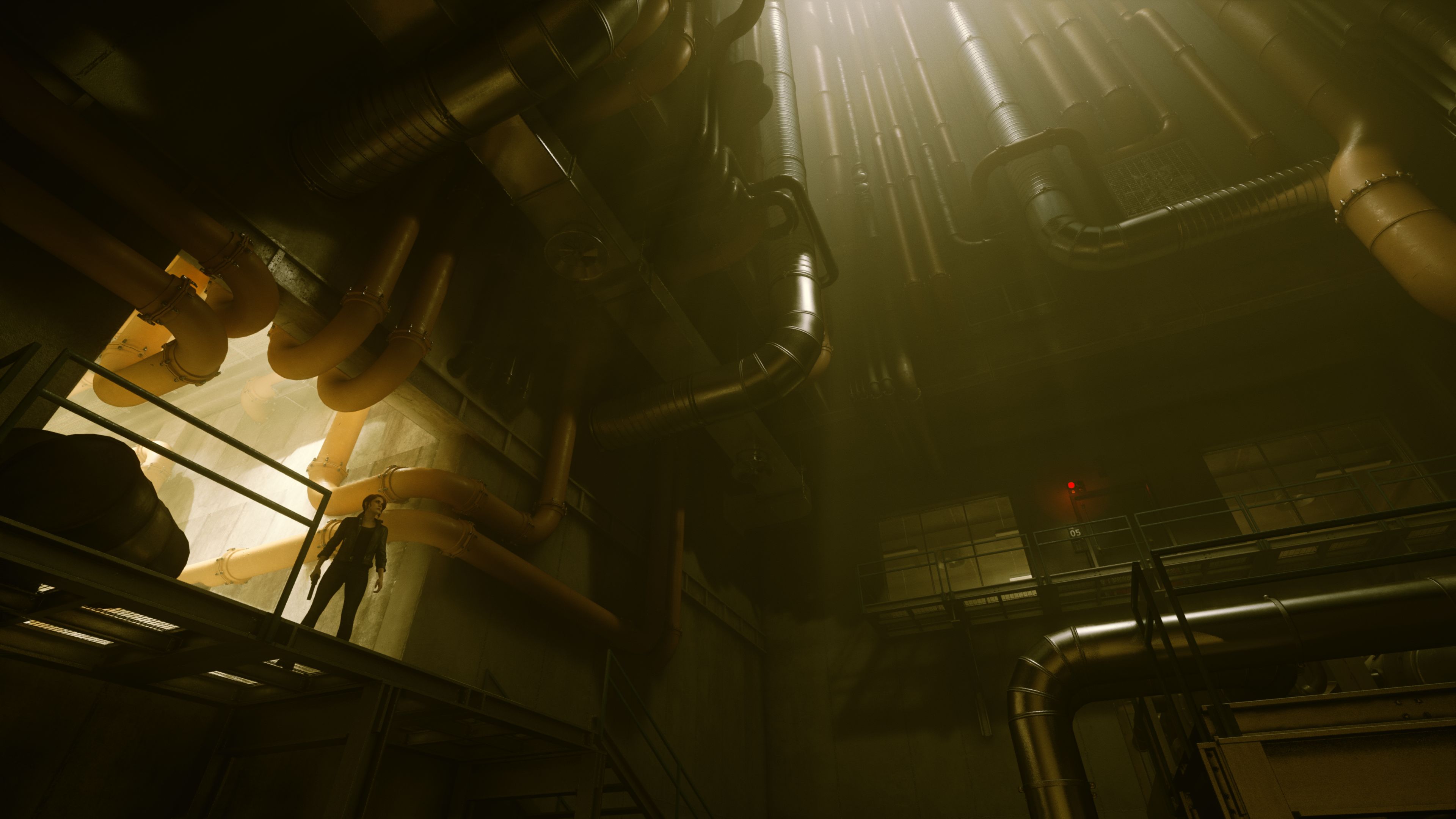 But Jesse also gets weird superhuman powers, the first of which is the aforementioned telekinesis. Mate, there’s a fire extinguisher right there! Just whoomph it off the wall! Did u no: if you line up the shot properly, you can telekineSLAP a table through two different people with one throw? Because I did. If anyone tells you it is a shooter they are incorrect and clearly playing it wrong. It is a headbanger, because you bang people on the head with fire extinguishers.

To make this preview more pertinent, I will point out that the reason I had so much room to throw furniture around was because this was demonstrating a real chunk of the game, near(ish) the start, where Control really opens up for the first time. The whole thing is estimated to be around 15 hours long, and is divided into missions, with side missions that build out the world and characters. How normal! In the case of the demo, Jesse had to get access to the main override in the building to lift the lockdown. This involved talking to a janitor who was so twinkly-yet-grouchy and knew so much I suspect he’s actually like, God, or something, cleaning a giant haemorrhoid out of some pipes, and getting the reactor working again before everything exploded. 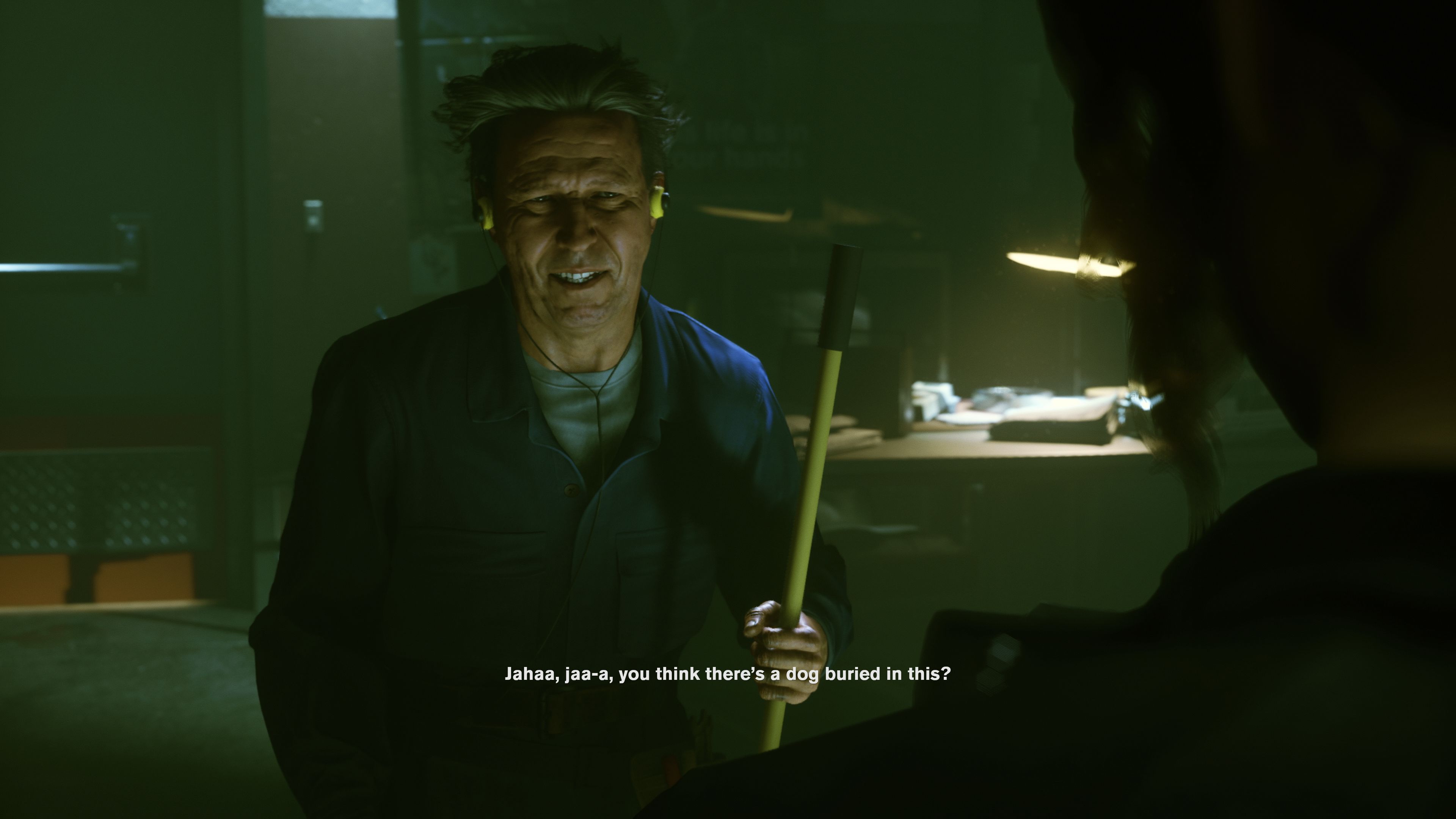 It doesn’t have any quest markers telling you where to go, so doing all this is a matter of, uh, paying attention. I need to fix the reactors, so I guess I’ll follow the signs saying the reactor is this way, right? It was refreshing playing a game that said it wouldn’t hold my hand in that respect and then actually didn’t, unlike, for example, the way Assassin’s Creed Odyssey pretends to make location gubbins more difficult, bu gives you a series of increasingly specific instructions and a massive flashing YOUR OBJECTIVE IS NEAR sign.

You can bring up a small map of the floor you’re on, floating on one side of the screen. If Jesse hasn’t unlocked a door yet or explored an area, it’s labelled with a series of ominous question marks. Eventually you start to learn your way around. But The Oldest House also has walls that move and floors that suddenly disappear to reveal an interdimensional side mission. It is both alive and lived-in. And the maintenance sector is a dark maze of worming pipes and echoes.

“I don't think people necessarily understands what goes into the incredible effects to make a building feel alive,” said Maggs. “We have this uniform way of designing the signs for each sector for example, like that kind of detail. All the lines on the floor in the maintenance sector -- someone thought about that and how people would use that environment.” 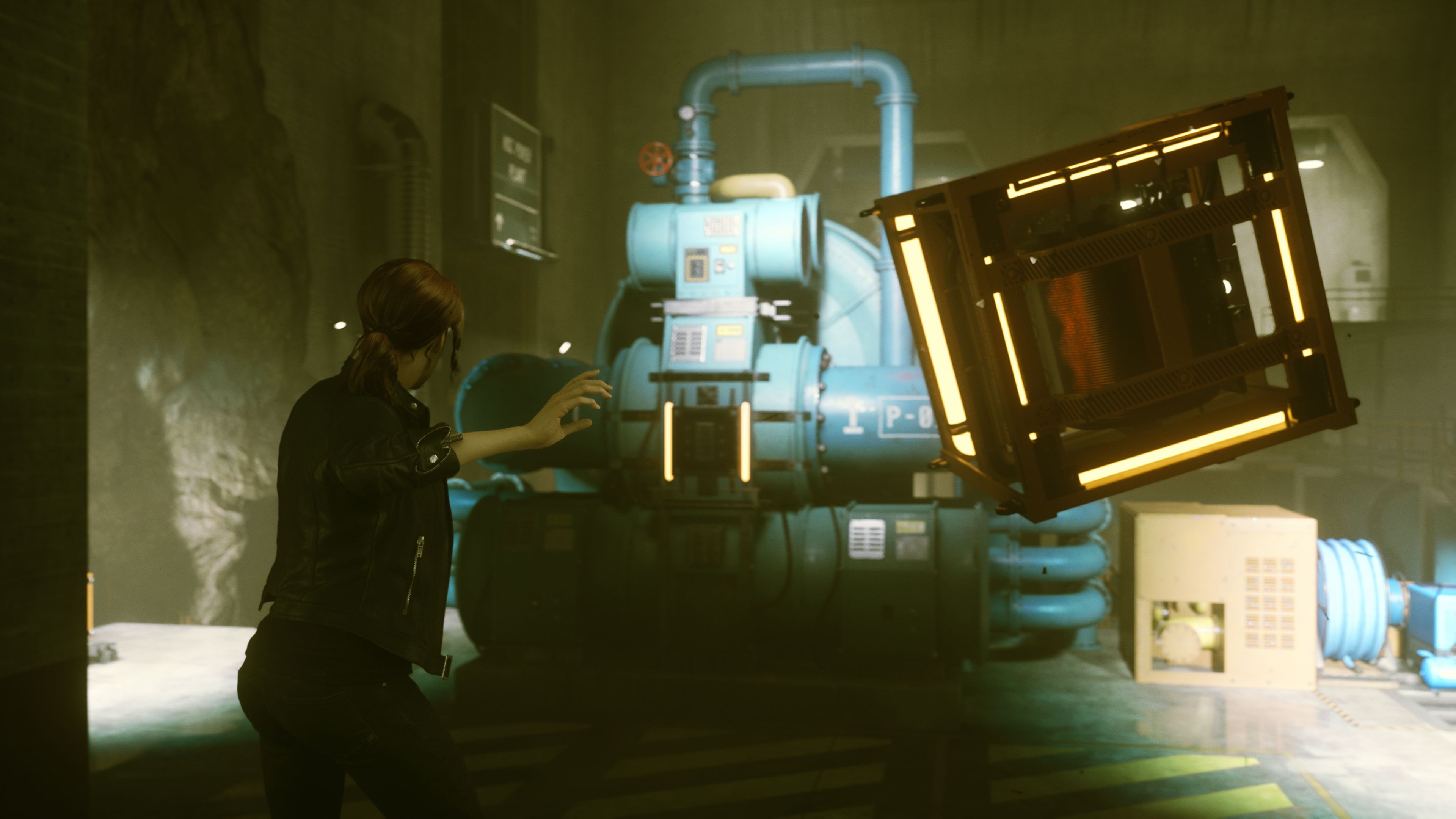 There are abandoned staff rooms, and storage racks full of stuff that was clearly shoved there because someone’s manager didn’t tell them where else to put it. And there are also, tantalisingly, areas you can’t reach. There was a ledge I could see but not reach yet. The rooms full of angry coral. Mysteries to demystify. You can revisit different areas once you have new powers, and reach that ledge you spotted hours ago.

Remedy clearly have high hopes for Control. It’s going to have two expansions, and Puho said, quite candidly, that they’re hoping to make it into a franchise. “The directors job is really never over,” he said. “This is Jesse's story, but there's lots of other stories out there.”

That’s all well and good, but if they don’t all include fire extinguisher combat then I, like an angry Scottish millionaire being asked to invest in elastic rulers or tiny socks for cats, am very much out.