If you click on a link and make a purchase we may receive a small commission. Read our editorial policy.
This is Inkrose, a Dwarf Fortress diary. You can find every episode listed for your convenience here. It is a sequel of sorts to the Basement Of Curiosity, which you can find archived here.

Once upon a time, seven dwarves set out into the jungle with the simple dream of constructing an underground chimp jail. You can't write sentences like that about most games. But in the context of Dwarf Fortress, the legendary world simulator under permanent construction by programmer Tarn Adams and his brother Zach, it is a perfectly reasonable statement.

Dwarf Fortress is my favourite game. And since it's essentially a machine for generating weird fantasy stories, it's even more fun to narrate than it is to actually play. Hence my previous diary series - The Basement Of Curiosity - which concerned the aforementioned chimp zoo. After a lengthy 25-episode run, the Basement finally came to an end on camera, at this year's EGX Digital event. And while I won't spoil its conclusion, I strongly recommend you watch it for yourself, right here. The ending will... surprise you.

But when one Bird Hole closes, as the saying goes, another opens. Welcome, then, to Inkrose: a fortress unlike any other. I can't promise it will last as long as the Basement, since as you will soon see, the odds are rather stacked against it. But it does have one thing on its side at least, and that thing is god.

"When one Bird Hole closes, as the saying goes, another opens. Welcome, then, to Inkrose: a fortress unlike any other."

Well, a god, I suppose, as the bastards are ten-a-penny in your average DF world gen. But this deity is a bit special, as it is Tarn Adams himself, the technical creator of every Dwarf Fortress universe, and thus some sort of metagod. Despite being hard at work getting Dwarf Fortress ready for its Steam release, Tarn found the time not only to make a custom build of the game for me in order to make this series possible, but to hang out with me as I took my first steps into it.

Thanks again to the magic of EGX Digital, you can watch the first hour of Inkrose's history as it happened, in the video below. Tanya X Short, captain of DF's publisher Kitfox Games, joins us, as does Tarn's cat, Scamps. It's lovely.

Highlights from the session include (but are not limited to):
- A debate as to what constitutes respect with regard to kobolds
- A secret shrine
- Digging through an aquifer LIKE IT WAS NOTHING
- Massive lists of zombies
- Meat quandaries
- A relaxing tutorial by Tarn on the semi-hidden statue customisation feature

The brief I gave Tarn for this custom build was simple, but suitably Old Testament. I have decided, you see, that the dwarves of Inkrose are religious fundamentalists, who have struck out into the wilds in order to found a community run strictly to the commandments of their belief system. The commandments these dwarves follow (there are seven of them, each of seven words, because seven is a holy number) were sourced from the folks on the Dwarf Fortress section of the Kitfox Discord server, and then transcribed onto an in-game adamantine slab, hardcoded as cargo on the initial embark wagon. 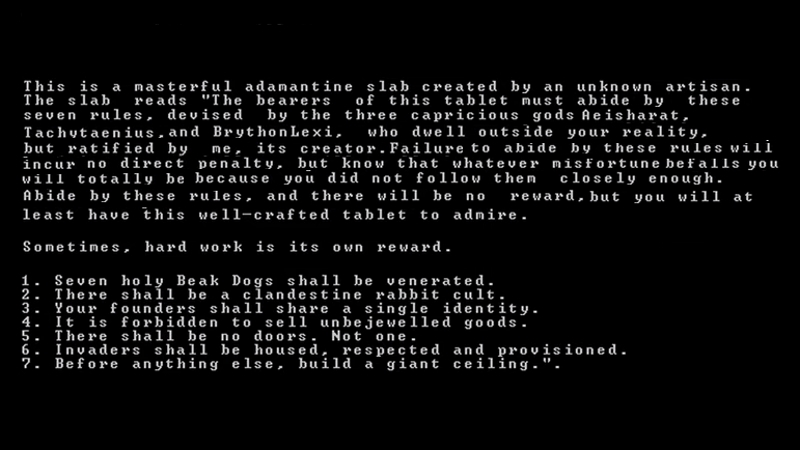 Right. Well. This should be a bloody doddle then, shouldn't it? Seven dwarves, all with the same name and profession identifier, lumbered with the care of seven ravenous, gorilla-sized carnivorous birds. Ravenous, gorilla-sized carnivorous birds which, I should add, were also hardcoded into the embark loadout for Inkrose, and which are only semi-tamed. Meaning they could go Full Brutus at any moment, should the dwarves neglect to keep them sweet.

And it's not like that's all they have to do. These seven Urists (for that seemed the most apt name for them all to share) can't even begin the business of Beak Dog husbandry until they have "built a giant ceiling", and even when that's done, there's a rabbit cult to consider before they can even think about such frivolities as food, drink and furniture. And just to make them feel extra secure, they're forbidden to build doors and must offer hospitality to all hostile invaders.

Next week, I'll do a proper Episode One, where we get to know the Urists, and take in a little of the site they have settled in. I might even break out the Lego again, for old time's sake. But before that, I need to do a lot of very urgent research into Beak Dogs.

Next time on Inkrose: hopefully, I find a way to placate Beak Dogs pretty bloody sharpish.