Insane Robots is a hybrid card game/roguelite that truly believes it's wacky and zany and kerrayzee, in the manner of a middle-aged insurance salesman who kicks back by wearing a t-shirt reading "I'm bonkers, me!" while manning his six-burner gas barbecue with temperature gauge, modular hotplate and removable drip tray.

Just don't make eye contact, yeah? It is, however, an entirely proficient game of turn-based hitpoint-nobbling, with a simmering sense of dilemma about whether to attack, defend or defuse. The escalating lethal frenzies of Slay The Spire it is not, but rather a series of frighteningly equally-matched battles, with nice sideline in bluff and gamble.

It calls itself 'Insane Robots' and it's full of superficially lurid art and dialogue meant to imply this is a maniac, off-the-chain affair, but in practice that stuff's just thin and unfunny fancy dress. If you want delirious unpredictability and creativity in a card-based rogue-esque, I will happily point you in the direction of the boundlessly charming Loot Rascals instead. Insane Robots does better battles, mind you.

Here's how it goes. You're a robot, wandering jungle, ice or desert-themed (insane!) arenas in search of other robots to battle. Once you do, you flip into turn-based time and draw cards for the likes of Attack (insane!), Defend (insane!), Boost (insane!) and Swap (insane!).

Rather than directly attack or defend by playing a card, you need to build up to it. Both your attack slots have to be filled with an appropriate card to complete the 'circuit', and the same goes for defence - i.e. only one attack card means you can't attack, only one defend card means you're helpless if your opponent has a go at you.

While you're trying to amass attack cards, your opponent might play a card that coolly transforms your 5 defence card into a 0 defence card, at which point you realise their next attack is going to kill you, so you need to frantically divert all your efforts into restoring your shields. That's the essential dilemma here: ready for attack as soon possible and leave yourself vulnerable, or do the opposite, which means your opponent also has time to turtle?

Or: drop a glitch or power card that will alter the numbers on a card belonging to either side. Or: drop a 'boost' that, one-time only, counters their next attack or doubles yours. Or: combo a couple of unwanted cards to create a new, more useful one. Or: quite a few other tricks.

It's good stuff, and key to it is that your opponent is at it too, so any match is filled with sudden upsets: your perfect 10 attack is suddenly reduced to 2, or their fully-specced defence deck is made to swap places with your measly one.

The key here is guessing when is safe to make your power-play, and usually needing to massively overcompensate in case they've got something tricksy up their sleeve. And the great joy of it is that, unlike something like Hearthstone or Spire, everyone has the same cards.

Whatever character you play as will have a bonus skill or two, such as +2 to Defence or a great likelihood of a specific card coming up, but other than that it's a clash of equal titans. I might run a mile from the presentation, but I'm massively impressed by the balance here - and that the acute tension of that means that only ever using the same handful of card types doesn't become repetitive. 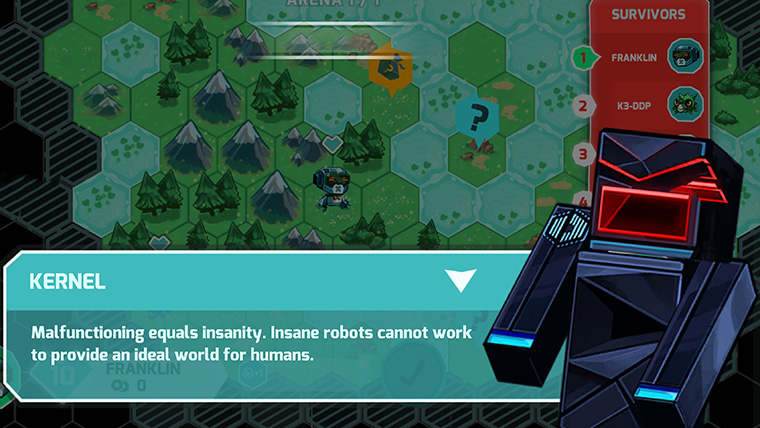 The only fly in that ointment is the Damage card, which bypasses all Defence and takes out some of your (finite within a match) hitpoints. I like that it's a wildcard that can undermine any strategy, but it somehow feels against the spirit of things, and for whatever reason, the AI seems to draw 'em significantly more frequently than I do. It is, of course, possible I'm just paranoid, but I think I'd prefer it as a pure battle of wills and bluff (e.g. 'have or haven't I locked that card so that any attempt to neutralise will it fail?)', rather than one with occasional trump cards.

That aside, I've had a better time with Insane Robots than I ever would have thought. The between-fight map-wandering feels a bit time-wasting, despite a few feints towards 'quests' - really, all it involves is taking turns to move a few hexes over in search of an opponent, a pick-up or a shop where you can recharge health or buy upgrades. But it's fine, it does the job. In fact, Insane Robots holds up remarkably well as a singleplayer game.

Which is just as well, as I've been so far unable to find any opponents for online multiplayer - the playerbase is just too small. Sad, but on the other hand my suspicion is that it's going to hold together better a structured campaign in which you slowly upgrade your character with assorted minor boosts than it will as random one-off battles.

It's neat, and it's much more tense than any of these screenshots make it look. In another world, it would have carried itself less like a tie-in browser game for Cbeebies and attracted a more Spire-like audience. The price of insanity, perhaps.