This is what it must feel like to enjoy Battlefield or Call of Duty. I've tried many multiplayer military shooters over the years but I've never thought of one as more than a passing distraction until now. Insurgency: Sandstorm is more than a distraction. It's one of the most harrowing and thrilling depictions of combat I've ever seen, and I think it's a goddamn work of art.

It's the sound that does it. Or, at least, it always starts with the sound.

The stuttering crackle of an assault rifle somewhere ahead causes friendly troops to shout warnings as they dive for cover. The vocal cues are automatic, the game using a wide variety of lines for allies and enemies alike to create the illusion of perfectly drilled tactical trickery at one moment, and panic and chaos at the next. When your squad hit the deck though, that's a decision being made by their actual human operators.

Later, hunkered down inside a building, discussing our next move over voice comms, we're hushed by our commander. “Drones,” he says, and we fall silent. I can hear the hum of the engine but I don't know if this is a spotter, a hovering camera trying to figure out where we are, or an aerial hunter killer. I'm genuinely alarmed, even though I'm playing a game with a bunch of friends, and we were laughing about a team-kill a minute ago.

We're playing a cooperative mode in which we have to move from one objective to the next, seizing buildings and sometimes holding them as a counter-attack arrives. The AI insurgents who we're fighting against might be clever, I'm not entirely sure, all I know is that they're dangerous. At one point, with my sniper rifle steady for once, I kill five men in quick succession as they run around a corner. Each falls onto the bodies of the ones who came before. It might seem foolish at another time, in another game, but here it feels like part of the surreal brutality of the conflict.

Someone shouts “RPG” and, in all honesty, I can't remember if it's an in-game bark or one of the players. The building shakes, dust falling from the ceiling. My ears are humming and I'm sure there has never been a louder explosion in the whole history of the world. I guess that's what a rocket-propelled grenade sounds like. It's unpleasant.

Insurgency is frequently unpleasant. It's not a gory game, but it's full of the kind of shock and awe that breaks the spirit and either crushes or inspires resistance. Every bullet is the possibility of a life cut short and when mortars begin to thud and pound just beyond your line of sight, it can feel as if the roof of the world is about to fall in.

The sound of a weapon is different when someone is firing it indoors, right next to your face. Exchanging bursts of fire across a bridge, I laughed nervously when somebody zeroed in on my position and bullets started to tear through the sandbags I was crouching behind. At that range, I felt untouchable. I wasn't, of course, and death comes swiftly in this game. One shot will do it sometimes.

There was no laughter the first time I found myself up close and personal with an enemy. We'd captured a target building and a wave of insurgents had been dispatched to reclaim it. As the sniper, I decided I'd be more useful in a building some distance away, picking off enemies as they approached while the rest of the squad set up a perimeter inside the target. I made my way outside and was half-way up the stairs in an adjacent building when two men burst through the door behind me. They opened fire and instead of that distant crackle and pop there was a deafening series of booms. Shouts, screams, confusion.

Death is a serious inconvenience. It should be. No quick respawns here for the fallen; you'll only be thrown back into the game when your team reaches an objective. That creates a constant pressure to push forward. Kills don't count for anything unless they're in service of claiming an objective, and that encourages smart play and teamwork. 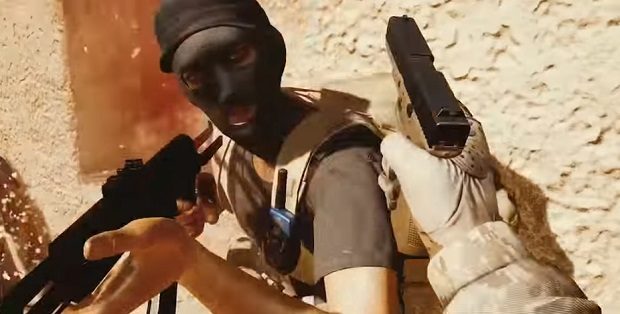 Because death has harsh consequences, killing a team-mate is less than ideal. It's never a good idea to kill your friends in the heat of battle but when you're taking them out of the game for a significant period by doing so, they'd be justified in being very grumpy indeed. Insurgency doesn't have cross-hairs or much in the way of on-screen HUD features at all. You point your gun and pull the trigger and the bullets leave the barrel in the direction it's pointing and damage whatever happens to be in their path. That means firing while running can be very hazardous to anyone standing in the general vicinity. I spent ages lining up a shot at one point only to fire, miss, and then hear one of my allies calmly explaining that I was shooting at him. I was more embarrassed that I'd missed such an easy target than that I'd not recognised him.

There are so many things I love about Sandstorm that I could go on for another thousand words. It's my ideal balance of realism and accessibility, and it all comes down to the way every moment of excitement is also a moment of fear. Checking a clip when your ammo is close to running dry and knowing that the second it takes to do so could be your last, wondering whether all of that noise and violence is capable of penetrating the wall you're cowering behind, hearing a cry of "gas!" from somewhere up ahead.

No multiplayer shooter has got its hooks into me so quickly, and so deep, for a long time. I was disappointed when I heard the story mode had been cancelled earlier this year, but on this evidence, Insurgency is more than capable of generating amazing stories without cutscenes and without a script. I want to play it forever, even though I find it intimidating as hell.

Insurgency: Sandstorm is due to launch later this year. Keep an eye on the official website for news of alpha access.