Look not to what high-speed, turn-based, sci-fi strategy wonder Into The Breach shares with its timeless predecessor FTL: Faster Than Light, but instead to how aggressively different it is. Though they share a soul of permadeath and moment-to-moment dilemmas, entire limbs have been lopped off and casually thrown aside, teeth and hair uprooted and plugged back in at strange new angles, eyeballs moved to places that were never designed to have eyeballs. Not in merely superficial ways either. It has moved from space-bound chaos to ground-based decisions, from spaceship crew management to mech vs horror-bug warfare, even from real-time to turn-based combat.

Yet the really startling change is that, unlike FTL, Into The Breach is rarely a game of chance, of random, cruel loss or sudden fortune, but instead is almost pathologically fair, even if it often doesn't feel like it. There is no calamity here that cannot be traced back to your own actions. In other words, you've only got yourself to blame for the total wipeout of humanity. But this particular end of the world is a glorious one, and one I will happily keep experiencing for years to come.

The setup: Earth is dead, basically. Big ol' space-bugs killed almost everyone years ago. But it's not too late to change that. Survivors from the future develop a double-whammy of time-travel tech and giant mechs, enabling them to journey back to the days before total destruction and seek to prevent the bugs from wiping out the last of humanity.

In practice, that's a great conceit that has very little bearing on proceedings, outside of choosing which one of your mech pilots you can carry over to your next attempt at saving the world. You've got a team of hot-shot soldiers and you need to make 'em go splat the aliens - it's a familiar theme, obviously sipping from an XCOM vein, but giving it a bit of a Japanese monster movie or Pacific Rim remix, thanks to a choice of scale that casts the goodies and baddies alike as beings the size of nearby skyscrapers.

And, crucially, those skyscrapers must be protected, for within them live the last dregs of humanity in this timeline. Simply slaying every bug that spawns on the map would be relatively straightforward, but preventing them from levelling a clutch of buildings in the process is where the real challenge lies. If too many buildings fall across the course of a campaign, so too does Earth. Meeting certain in-mission objectives can replenish losses, but the balancing act is so delicate that one bad turn can erase all gains - and more.

This is all presented as a small-headcount strategy game that's leaner than Mo Farah on a gluten-free diet. Anything that does not specifically and immediately play into where you're going to move your three units and what you're going to make them punch, shoot or shove has been excised. An entire campaign takes about as long as a single mid-game XCOM mission if you're lucky (and a lot less if you aren't), while a freshly-brewed pot of tea will still be steaming hot after a single battle. 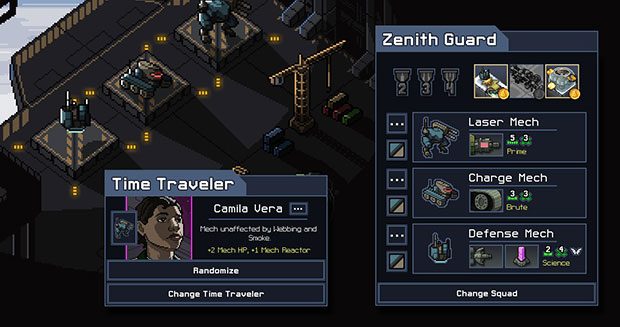 Yet this is not because everything happens at speed - in fact, every mission, hell, every action in every turn of every mission feels momentous, with every action and reaction entirely transparent. It's just that Into The Breach has aggressively removed all distractions.

You don't control buildings or support units, just a squad of three very different mechs that attack with chess-like specificity. Mission briefings and debrief are never more than a couple of lines of instant text either side of a mission. Optional objectives never divert you from primary objectives, but instead ask you to fold in an extra element of risk as you pursue them. The entirety of every map is visible from the first turn and the length of it can be crossed in two turns. Skill and equipment unlocks, meanwhile, do play an occasional part, but they're infrequent and subtle enough to never steal focus from the core objective - to win (or, at least, don't die).

There's an argument to be made - a very superficial argument - that Into The Breach is effectively always the same, that it has too few moving parts, that random map layouts can't save each mission from being, at most, a palette-swap made up of the same few, recurring elements. I rifle through my folder of screenshots to illustrate this post, and without the context of the robots I cared about, the buildings I was terrified might collapse, the victory I was jubilant about pulling off against seemingly impossible odds, they all look meaninglessly interchangeable. Small maps, total unit counts that rarely reach double figures - a small and repetitive thing, surely. 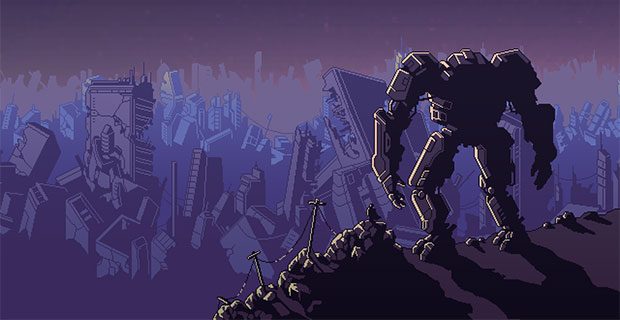 And that's the alluring genius of Into The Breach. It deftly flicks tiny switches that have huge effects upon a constant refrain of kill bugs > keep your mechs alive > don't let civilian buildings be destroyed in the process.

The enemy whose attack can span the length of map, rather than the norm of an adjacent tile.

The weapon upgrade that fires a shot from both the front of rear of your mech and which, if forgotten about, will inadvertently level a key structure.

The tidal waves, earthquakes and airstrikes which remove whole tiles from the map come the turn's end.

The sub-objective that yields greater rewards if you keep a particular lethal bug alive for the duration (which means shunting it away from buildings, diverting your resources away from killing other enemies). 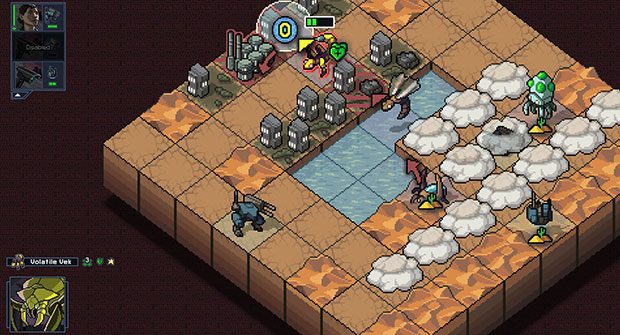 And on and on, these dozens of different possibilities assembling into hundreds or thousands of different combinations, which your brain surprisingly quickly learns to recognise on sight. It also quickly learns that any calamity is its own fault. Unlike FTL, there are no events that coldly swipe away a crew member or drain a resource. If one of your three pilots dies, or if a civilian building is knocked down, or if too many civilian buildings are knocked down, thus triggering the end of a campaign, you always know exactly why.

Yes, sometimes it can feel as though you've been placed in an unwinnable situation - those turns that start with all three of your mechs frozen in place by bug-webbing, or with a building you cannot reach in the space of one turn targeted for destruction. A perfect turn is not always possible, but a match with only minimal losses is, and to that end one of Into The Breach's masterstrokes is that it always shows you in advance what's going to happen.

When you press End Turn, you do so knowing exactly what's going to get hurt. Your mechs move first and attack second during their turn, XCOM-style, but aliens always attack first and move second. It's the simplest-sounding twist on paper, but with a dramatic effect in practice. When you end your turn, every mech or building that you were not able to remove from harm's way - either by killing or moving the enemy that targeted it - will take damage. 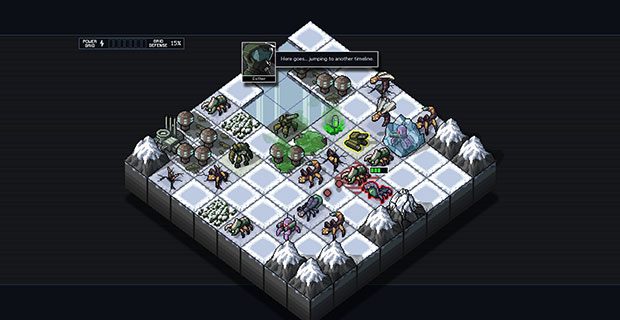 You know, full well, when you press that 'end turn' button what you have failed to achieve, what you have bungled or, less commonly, how gloriously you've managed the situation. There is a growing choice of mechs and mech abilities as you hit certain achievements, but they are just that - a choice, not an upgrade. Decide which particular plates you want to spin, sure, but none of 'em will save you from having to spin in the first place.

Don't get me wrong, I have sworn at this game so often and so viciously, I have felt betrayed by it, I have felt like a fool because of it. But, once the red mist evaporates, I always know exactly why I failed to save mankind. Which makes me determined that, next time, I will know exactly what to do, and I must do so immediately. Sometimes I'm right. Usually I'm not. I always know why. 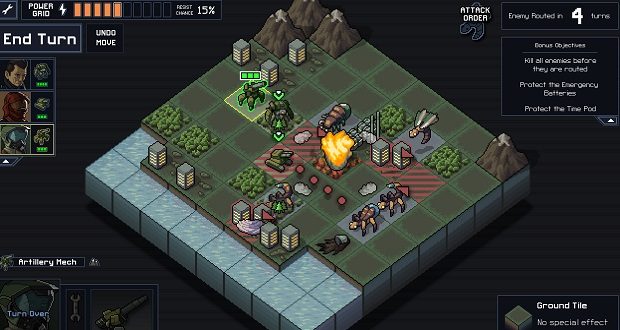 There are those games whose technology or setpieces or storytelling I thrill to. Then there are the games where I marvel, most of all, at the elegance of the design, the remarkable precision at which so many interlocking gears are arranged, particularly in something as breezily-executed as Into The Breach. The Spelunkies, the Slay The Spires and, of course, the FTLs. Into The Breach effortlessly joins those ranks, instantly feeling ageless and ingenious, a collecting of long-known designs honed to a glorious sheen.

I am sorely tempted to reach for the word 'perfect', and it's only a slight ennui about the five visual level themes and the repeating incidental dialogue that holds me back from that. (Again, it treads softly-softly in terms of storytelling, but unseen civilians will hail your arrival or a neat bit of a bug-slaying, in charming lines clearly chosen from a very small pool. Then again, the idea is that you're time-travelling back to do this again and again, which sort of covers that repetition). As it is, let's just settle for 'I cannot currently think of any reason why I would ever uninstall Into The Breach.'