I have been rude about Myst for longer than many readers will have been alive. Seriously, I'm talking for 21 years professionally, and six years before that as a hobbyist hater of terrible games. But, today I confront myself with an uncomfortable reality: I've not played it in a very long time. I've been wrong about other games. What if I'm wrong about Myst? What if my deep-set loathing of this screensaver with levers is based on the opinions of a less advanced earlier iteration of myself?

I don't want to do this. I've just installed Myst onto my PC, on purpose. What if... what if it's fine? I'm inviting a potential existential crisis that could unravel me like an old jumper. Who will I even be? Am I a man entirely built on a foundation of hating one game? Nrrrgghhhhh - I'm pressing Play.

(For clarity, I'm playing the supremely arrogantly named "Masterpiece Edition", rather than "RealMyst", because this is about being right about the game that came out in 1993, not one of the sad attempts to fix it in the meantime.) 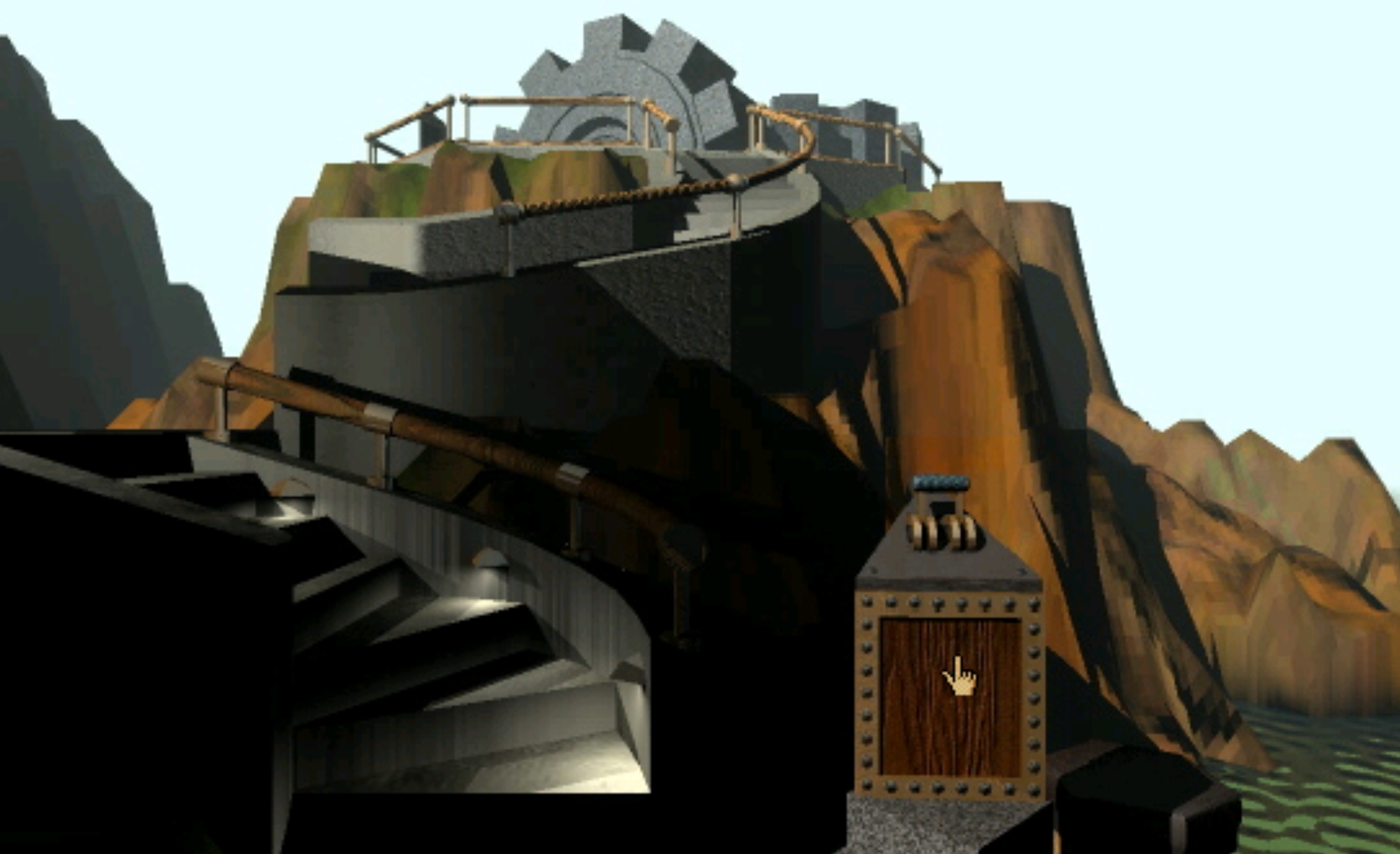 Myst was, of course, a game championed by the worst people who existed in the 1990s: Mac owners. Mac owners had a problem. They'd spent a vast amount of money on a machine that had about seven games available for it total, no right mouse button, and no eject button on the floppy drive. They'd been sold such a lemon, and such an expensive lemon, that there was nothing for it but to double-down and pretend it was by far the superior choice. "Well actually it's MUCH better for graphic design work," they'd say, having never done any graphic design work, nor ever intending to. ("And why should I need an eject button when I can drag this icon laboriously across the desktop and drop it on this other icon instead? Or more usually unfold a paperclip and frantically wedge it into this tiny hole on the front of the machine conveniently located where your PC wastes space with a button.") And they'd delude themselves and all those around them that the scant few games they could play were all absolute stone-cold classics. Thus Myst. The Macciest of all Mac games, a shiny veneer plastered across empty nothingness.

And I suppose if I were held hostage in a dank prison cell for ten years, and allowed only seven songs to listen to, I'd eventually convince myself they were the best songs. Mostly because of my declining faculties, but also desperate survival. 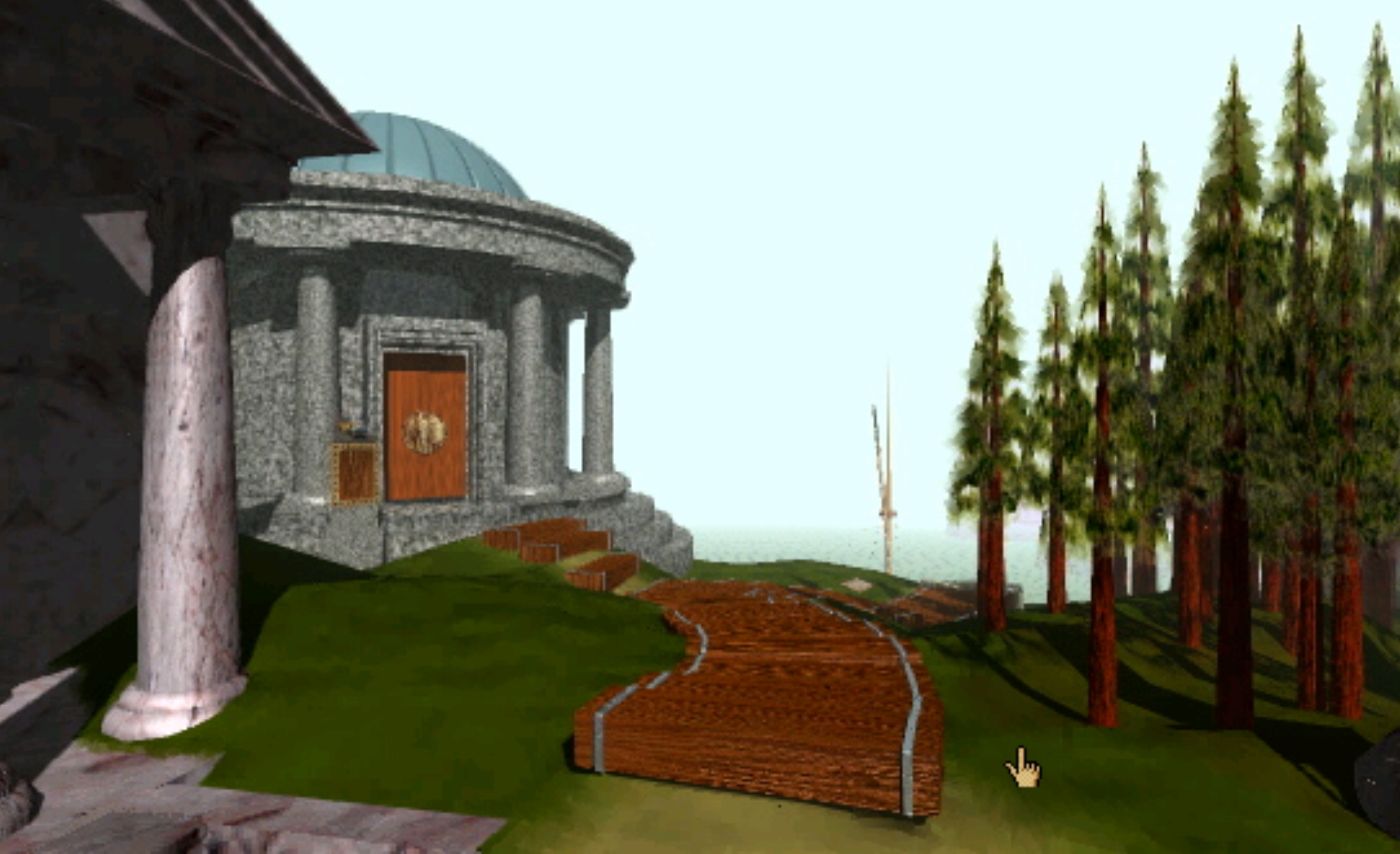 MYST, to correctly shout its name, begins with a man mumbling something about a book. Then there's a book. Then there's a moving picture in a book. Then you click on that picture and are "transported" to that world. A world of pastel pre-rendered edifices, the sea gently not lapping against the dock, and a box poking out the ground with a lever on it. When you pull the lever nothing happens. Welcome to [shouts] MYST.

Continue up some stairs (wildly competing against the game's main challenge: the random orientation with which you're placed in your next teleported location) and you'll find another box with a lever, but this time it's triangular! Once more, pulling that lever makes no perceivable difference, but for an indifferent clunking sound whichever way it's moved.

But wait! The switches have a more immediate role! Because you find a note lying on the grass. It reads,

"Catherine,
I've left for you a message of utmost importance in our fore-chamber beside the dock. Enter the number of Marker Switches on this island into the imager to retrieve the message.
Yours, Atrus"

Now clearly an almost infinite number of games can be mocked for their reliance on leaving notes lying around. And indeed they should be, one at a time. Hence my existence. Today it's Myst's turn. And wow this one's a doozy. Because Atrus has a secret message for Catherine, see. But Atrus perhaps hates Catherine, hence demanding that she run over an entire island to count the switches, rather than just telling her the code in what was presumably always intended to be a private note. I mean - and look we need to get into this - if the idea were that he feared others might see the note, he perhaps might not have wanted the secret code to be based on a number absolutely anyone else could find just as easily? Because unless the only people who mustn't hear the message are those who cannot cope with being mildly inconvenienced, this makes no sense whatsoever. 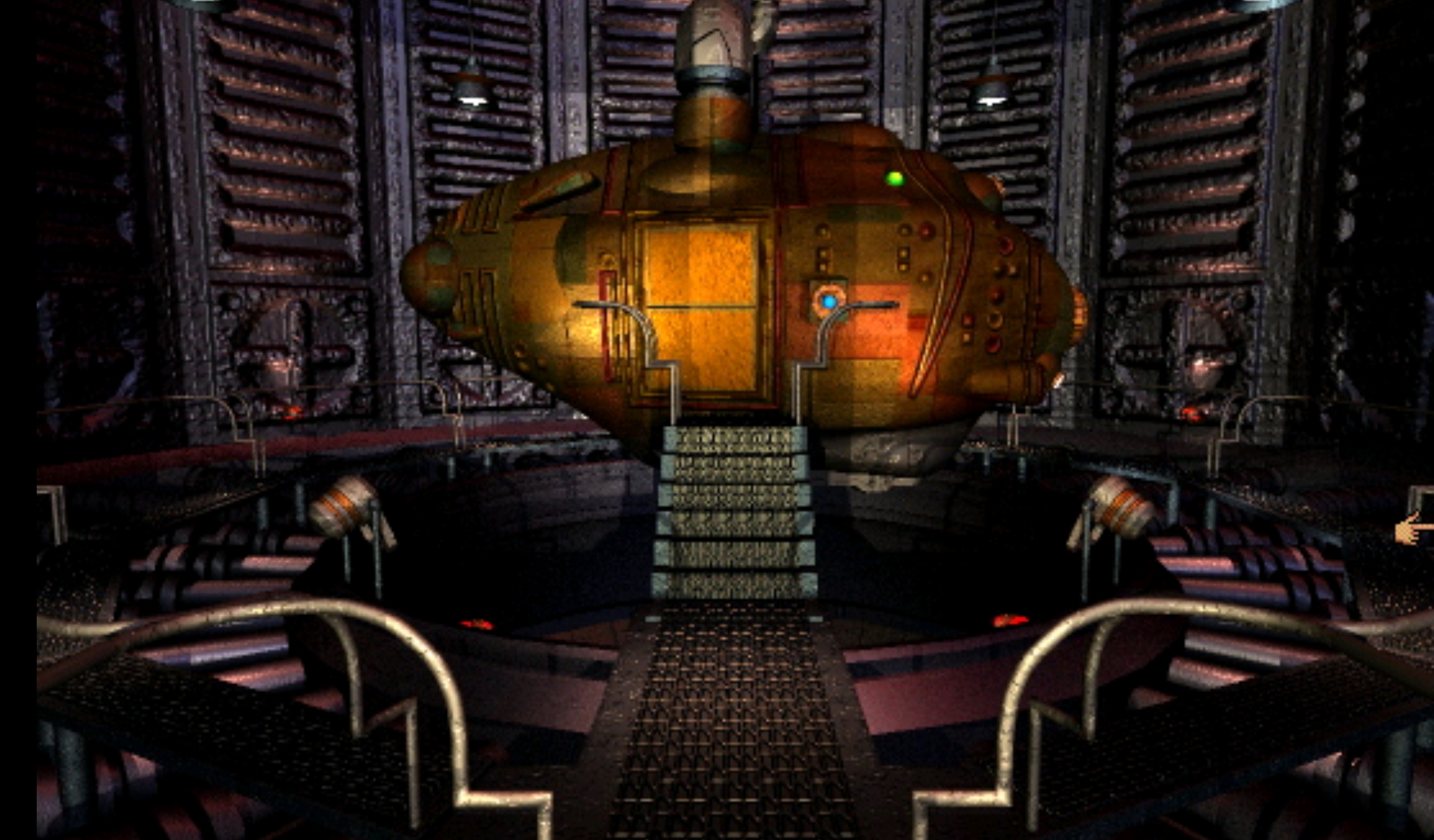 So I teleport my way around the island, going through approximately 47 million different doors, to discover 47 million different, entirely unexplained machines, with levers and switches and dials that can be pressed, perhaps having an effect somewhere or perhaps not. Then there's the library, where one must rotate the tower to get the codes and the locations for... it doesn't feel an urge to say. There are also a bunch of books to read, each containing diagrams and numbers you're going to need to randomly apply to random machines, in between reams of the most abysmally written exposition in gaming history. Some choice excerpts:

"Climbing the ladder led us to their village which is about ten meters above the water and can only be reached by rope ladders that stretch from the lower paths to the village level approximately half way up the grand trees."

"Today the second day on this newly created age a strange thing happened. It was not strange to me but the three boys did not understand what was happening."

Yeah. This sure is a "masterpiece". A collection of run-on sentences and toddler-level descriptions, weaving a wondrous magical world all about me. 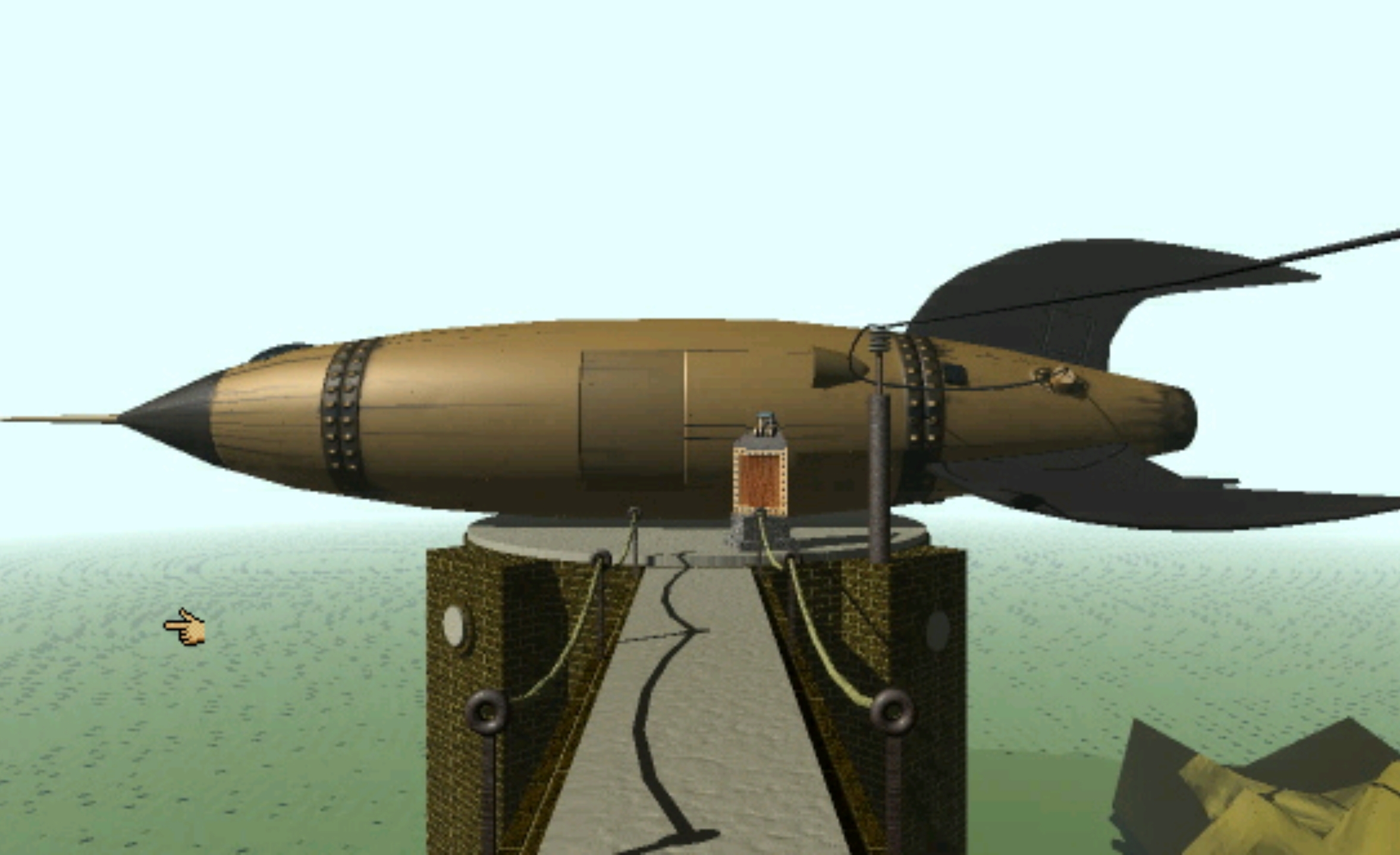 Oh my goodness, I've deleted so many games as awful as this from my phone. Myst was the worst of the "escape the room" genre decades before it plagued our pockets. Travel to a new "age" and you'll never guess what! It's another collection of unexplained levers and dials and wheels and buttons, all of which must be pressed at random in an effort to discern what they might do. There's no direction, no sense to the path, no narrative flow. It's just a great big unlabelled remote control, and you're supposed to feel good about yourself when you work out which button changes channel.

But these interactions are made all the more infuriating by never knowing what clicking the cursor will do. If I click on this chair will I get closer to it, move it, look under it, take a step back from it, or most likely, turn around 180 degrees for no reason at all. It's such awful, awful design.

There are moments where Myst almost makes some sense. In Channelwood there's a network of pipes on the ground, and you have to direct the flow of water to various locations to power lifts and open doors. And were it possible to navigate sensibly, this would be... crappy but fine? Except it's not possible to navigate sensibly, the game utterly indiscriminate in which direction it'll have you facing after clicking in any given direction. Or indeed in which direction you'll have gone despite clicking in any given direction. It's offensively bad, with a click to the right sometimes turning you 90 degrees, sometimes 180, sometimes something in between, with no indication which it will be. When stumbling between a near-identical network of treehouses, unable to tell if you've turned slightly to the right, or completely about, it makes me want to hunt down the creators and throw them into a volcano. 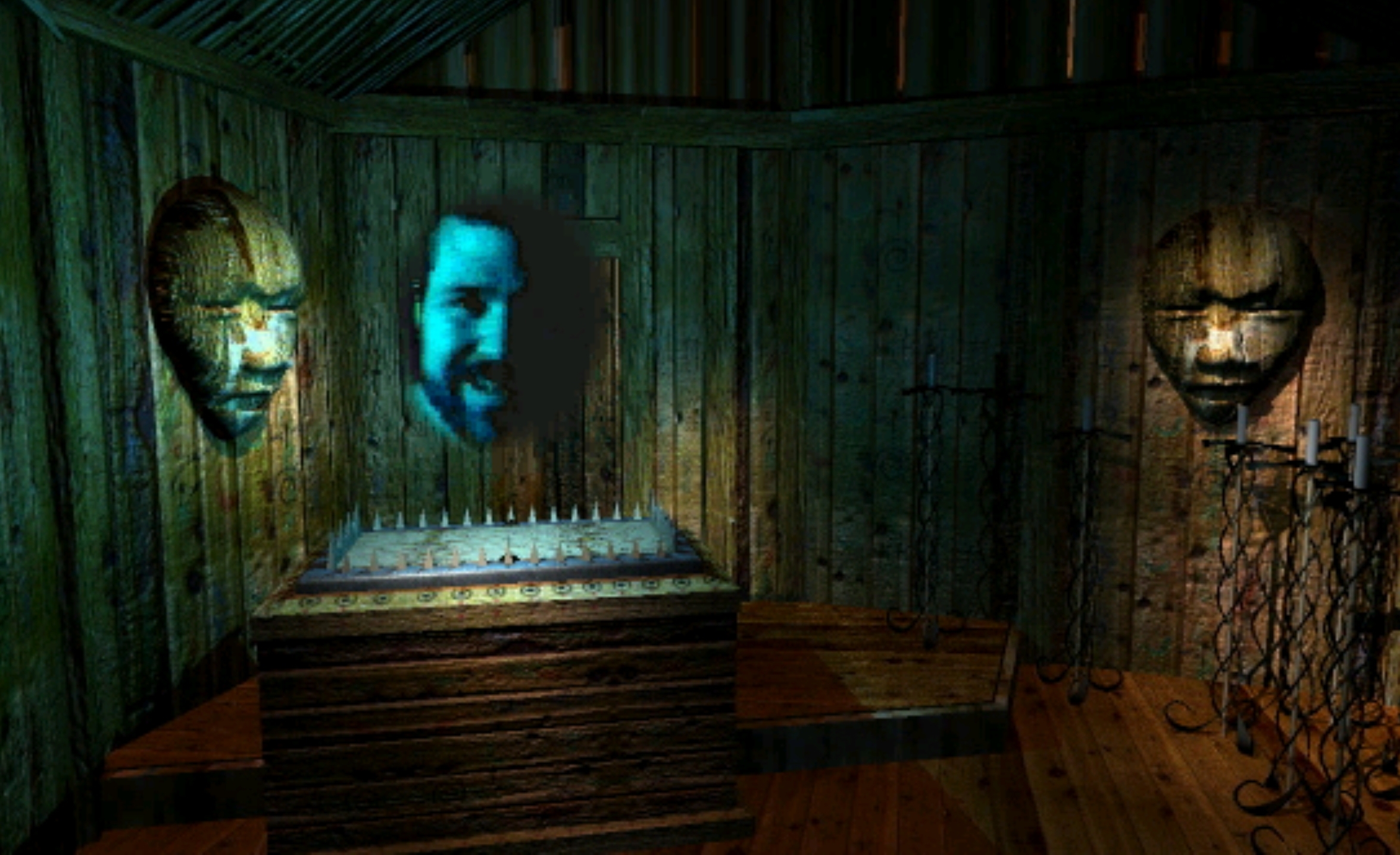 Intrigued to learn if there was ever any discernible pattern to the player's intended actions, I took a look at a few walkthroughs, to see how they justified the path I'd taken via arbitrary clicking. So much was revealed by the first instruction from UHS: "What exactly is the point of this game?" Having finished it, I'm still left with that question.

Your punishment for solving all the puzzles is having to sit through some amateur dramatic monologues by the two wholly unestablished characters of Atrus's sons, and another seventeen or so from Atrus himself. You can either trap yourself in a book with one of the obviously-as-bad-as-each-other brothers, or do the obvious right thing and side with their dad. And then it just sort of stops, nothing resolved or changed or ever given meaning or sense. It only has bad endings.

But I have chanced upon a solution! I'm sure this is very well known among dreadful Mac users or whoever, but I've discovered it for myself. Here's my Ultimate Walkthrough To Myst:

1) Walk around the island flipping up all eight switches. This takes about two minutes. You need to set the clock to 2:40 using the wheels.
2) Flip down the first switch by the boat.
3) Take the piece of paper from inside the box to the library.
4) Go in the fireplace, press the button, and then add this pattern. Press the button again.
5) Click the page on the mumbling man.
6) You've won!

Phew, that saved you an awful lot of horrible bother. 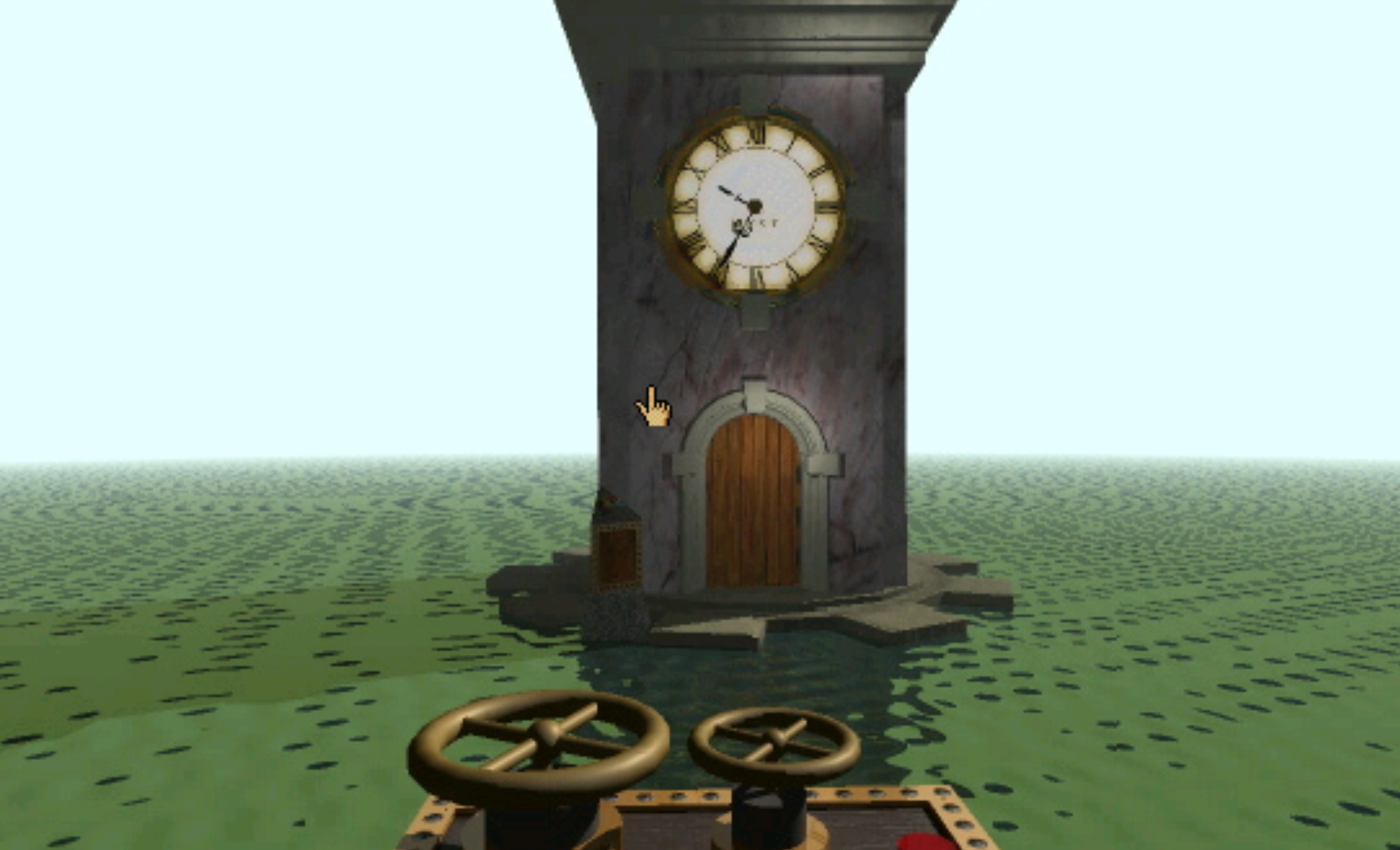 This is simply terrible. There is no excusing the adoration this game received, simply because three decades ago we weren't used to pre-rendered graphics. Many puzzles are just nonsensical (the elevator in the tree puzzle is defined by the Geneva Convention as a war crime), others are banal beyond belief (put in this numbers, now put in these patterns in order, now do that somewhere else). And the storytelling/worldbuilding, for which Myst is praised the most, is catastrophically appalling.

It makes no sense as you play it. You can discern from trudging through the infantile prose in the stack of books that some guy can jump between worlds via magic books. And he has a wife, and two sons, and the sons sometimes come with him. They're good boys, he trusts them. Then there's an aching void of nothing before the entire plot is dumped on your head gull-style right at the end after you've finished. They weren't good boys at some unspecified point in the future! They were trapped in books. It's over now. Um... So... Tum te tum... 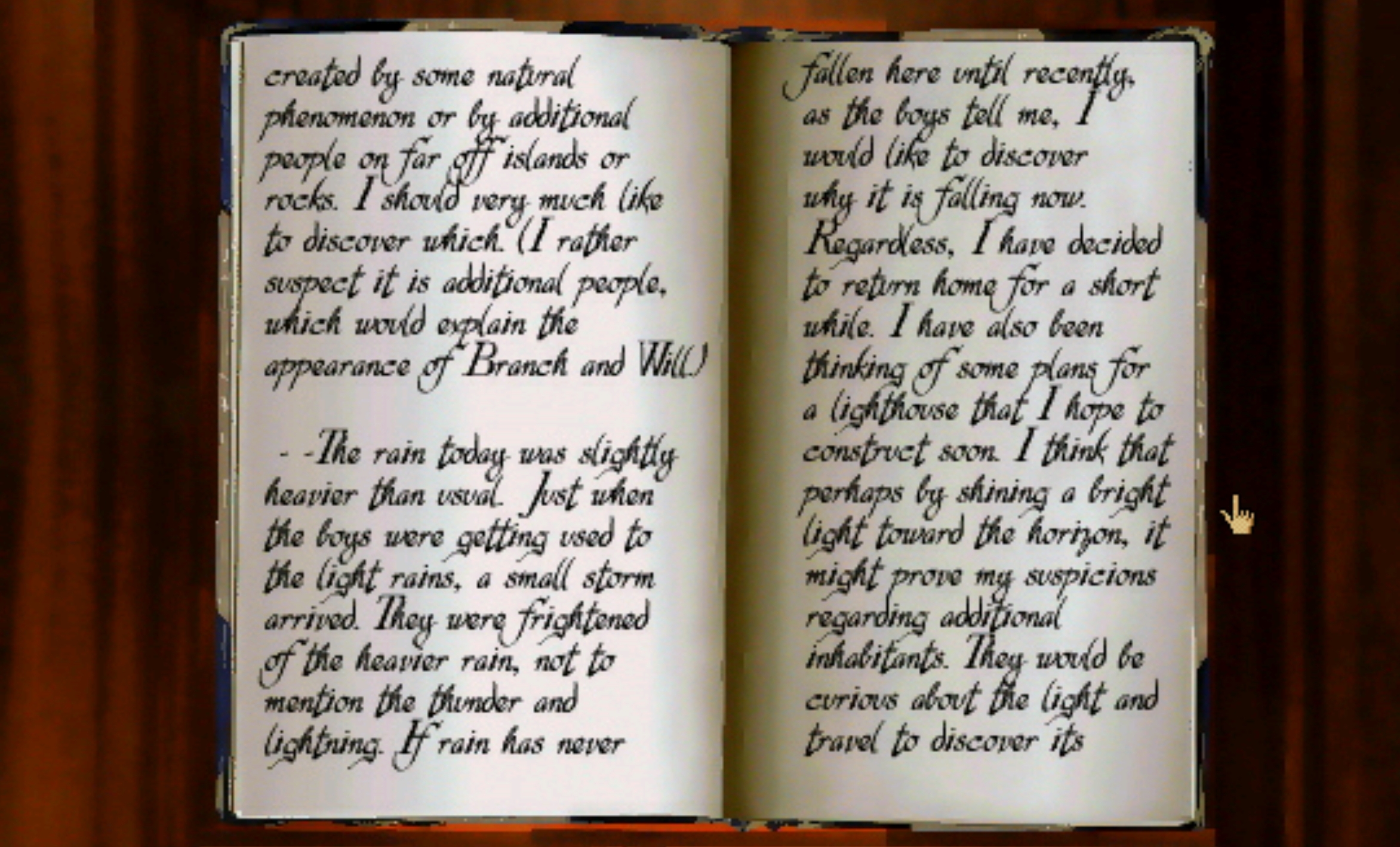 Myst is a horribly designed, horribly structured, horribly written, horribly acted, horribly controlled mess of a game. It absolutely is the Vaseline-smeared barely-interactive Power Point demonstration I've been calling it for 27 years. It's a vacuous, ugly, and downright weird in its colonialist approach to Atrus's saviour-complex invasion of multiple worlds. More than anything else, it's deathly dull, never rewarding you for completing a "puzzle", just wearily trundling on until it doesn't quite stop.

So that's good news then. The hate at the core of my gaming soul is wholly appropriate and remains well intact. Myst is as bloody awful as I've always said it is, and if you like it - even a tiny bit - you're embarrassingly wrong. And probably owned a Mac.

Can I still play Myst?

Yeah, it runs in SCUMMVM (for some reason) via Steam or GOG.

Should I still play Myst?

You shouldn't have played it in the first place. If I catch you playing it now, there will be real trouble.