Zack Garriss wants you to feel guilty when bad things happen to good people. The lead writer of Life is Strange prequel Before the Storm is as passionate as any writer I’ve ever met on the subject of interactive storytelling and he has some strong opinions about the future of the medium. Guilt and grief might be the main course, but there’s a side order of emotional highs and the occasional bout of expletive-laden insult swordfighting, minus the swords.

It all starts with guilt though, because for Garriss that’s key to the entire choice and consequence design of this new era of adventure games. More pondering and contemplating than pointing and clicking.

To Garriss, those choices shouldn’t just be neat narrative devices or divergent branches to explore. They’re the emotional centre of this kind of storytelling: “The next level of narrative in games is to inculcate responsibility. By the nature of the medium and the story we’re telling, there’s guilt involved when you cause harm to the characters. In an interactive medium, there’s a level of complicity in all of these choices and you’re having an impact on the story that can cause minor irritations and much more severe consequences.”

One aspect of the original game that impressed me was the sympathy it showed for its characters. They suffer and grieve, but as a player or observer, you’re not encouraged to sneer at their struggles. Teen and young adult angst is easy to mock, and even if Max and her friends escaped derision the game could have treated its older characters as one-note villains to be humiliated and disrespected. It’s a staple of storytelling focused on youth, whether Ferris Bueller or any of countless other eighties comedies that make a stern principal or overbearing parent a focus for disrespect of authority.

In Life is Strange, the adults of Arcadia Bay have their own complications, and their own vulnerabilities. This is important to Garriss and ties back into his belief that interactive storytelling can create sympathy and guilt in ways that are much more difficult in other media.

“In film and television, characters are often treated as objects. They’re there to be used by the plot, as devices. I loved that Life is Strange shows care for its characters, and we want to tread that same line carefully. We do put them through horrible situations and they do suffer, but we want to treat them with respect.” 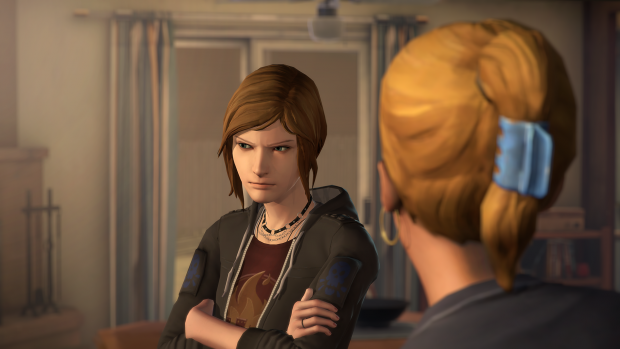 This level of sympathy becomes even more important when dealing with one of the game’s central themes: grief.

“Chloe is grieving the death of her father and the loss of her friend Max, who has moved away from Arcadia Bay. When you’re going through that process of grieving, reality is heightened and your connection to everything around you is altered. You might spot the person you lost in a diner or in a passing car, things might not taste the same, you might lose control.”

Behaviour that might be dismissed as petulance and teen angst has a deeper root and darker shades to it. There are moments in what I’ve seen of the first episode where a player can make Chloe behave obnoxiously, spitefully and carelessly. That’s where the guilt comes back - not just in the effects that Chloe’s actions have on other characters, but in the way that our own choices as a player reflect on her. Life is full of chances to embarrass and endanger yourself, and there are decisions, large and small, that Chloe will regret for a long time. And attempts to do good deeds will often come back to haunt her as well.

When I last wrote about Before the Storm, I suggested that one of its strengths might well be its take on a coming of age narrative as a form of tragedy. The actual act of growing older, of taking on responsibilities and of leaving familiar places and people behind (or being left behind by them in Chloe’s case), is full of anxieties. But there is also excitement and optimism. Before the Storm is a love story too, in part.

“The game is based around the relationships that change you and the sense of being in a place of loss and discovery. It’s about having that one person who makes everything seem worthwhile and the fear of losing them.”

All of this talk of heightened emotions and grief might disguise how funny Before The Storm is. Chloe is bold to the point of recklessness, squaring up to men twice her size and threatening to beat the crap out of them. It’s hilarious, endearing and empowering, often simultaneously, though I’m not entirely sold on the new ‘backchat’ conversation system that plays out during some confrontations.

Certain dialogue choices, marked with sweary speech bubbles, trigger a backtalk sequence. It’s a minigame of sorts in which Chloe, without the time-twisting powers of her friend Max, exercises her most potent ability: aggressive sarcasm. Chloe and her target trade insults, and there are ‘correct’ choices to make, picked out by figuring out the response that most directly plays with the previous line of dialogue. A bouncer tells Chloe she’s acting cute and she hits back with a jab about how cute the flowery design on his motorbike is. 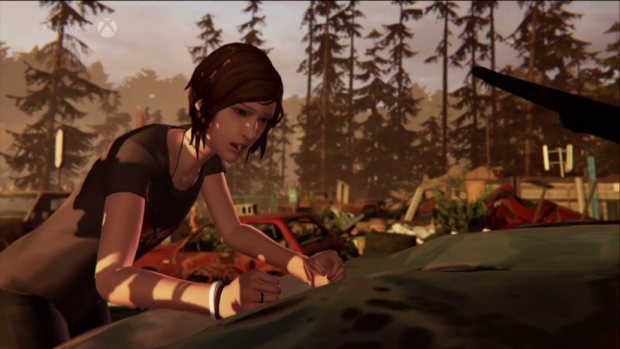 Certain dialogue options are only available if you’ve picked up on environmental cues by having Chloe investigate them, which might add some complexity, and there’s no actual fail-state, just a different outcome. There’s every chance that some of the later interactions will be more involved than the early examples we were shown, but having a conversational minigame looked more like an interruption to the game than an enjoyable diversion.

Backtalk aside, Before the Storm looks like a moving, funny and accomplished prequel. When I first sat down with Garriss I asked him if he was intimidated by the prospect of tackling a much-loved setting and group of characters that his studio didn’t create.

“Of course. I think it’s testament to the power of Life is Strange how strongly the fanbase feels. About the world and those characters. Dontnod achieved something extraordinary and it’s a huge amount of pressure to create something in that world. We’re fans before anything else.” 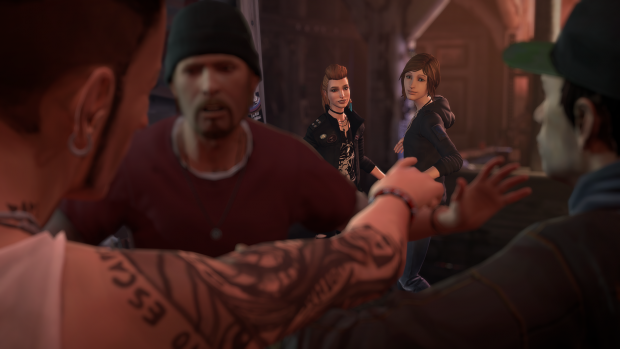 Life Is Strange has inspired lots of fan-art and I asked Garriss how a team of fans working on a prequel can avoid writing what might be seen as fan-fiction rather than a genuine extension of the story?

“That’s a good question and it has a simple answer. It’s craft. We have a very diverse team of people who come from films, television and theatre, we have a toolset for interactive narratives that is better than anything else in the industry right now. But it comes down to the way we work as well. We have a policy of open criticism and discourse. I’m the lead writer but everybody contributes: it’s a shared vision.

“The experience of writing feature films or TV episodes requires thinking about the most interesting obstacle or the best line of dialogue or the best piece of choreography for any given situation. We have to ask ourselves not what the best option is but what the two most interesting versions of any given scene might be, and how they’ll impact on our larger themes and plot. It’s incredibly satisfying but it requires a lot of patience.”

And in the end, cut through the wit and the friendships and the love, am I right to see Before The Storm as a tragedy?

Life Is Strange: Before The Storm is due for release on August 31st 2017.