In the basement of an unassuming suburban home just outside Washington, D.C., you'll find one of the largest collections of documents, data, images and props from Origin Systems, the company behind the Ultima and Wing Commander game series of the 80s and 90s.

The Origin Museum is owned and curated by Joe Garrity, and has been running since 1999, when Garrity lived in Virginia. Over the past 18 years, former Origin staff have donated entire offices worth of documents and even source code to the museum.

When Electronic Arts needed someone to catalogue their Origin Systems holdings, it was Garrity that they turned to. The museum's collection of continuity polaroids from the production of Wing Commander: Prophecy were scanned and used in the 2003 Game Boy Advance version of the game.

And the development documents that GOG.com bundles with its Origin games were all originally scanned by the museum before being published on the Ultima Codex and Wing Commander Combat Information Centre fan sites by Garitty's long-time collaborators Kenneth Kully and Ben Lesnick.

RPS: How did you go from being a dude with a few Ultima games to running a whole museum?

Joe Garrity: Just like everybody else, I was playing games and I looked at my bookcase and went: "Wow, all these games came from the same company. What else are they doing?"

This was around the time eBay started. People were breaking down their collections in the late nineties, and I was obsessed with Ultima VII at the time. So I was buying every one- or two-dollar Ultima VII that was out there, and it didn't really cost me anything - that was lunch money.

In late 1999, my wife Paula - who was my girlfriend at the time - wrote letters to Garriott and Chris Roberts and Denis Loubet and George 'The Fat Man' Sanger and all these people, and said: "I'm taking my boyfriend on a secret vacation and he talks about you guys as if he knows you. But he's never met you and I think it would be the thrill of a lifetime for him if you could find time to share a handshake or give him an autograph."

And these people invited us into their homes.

On that trip, we'd been invited to visit Origin Systems. As it turned out, Richard Garriott got fired from Origin that weekend, so we didn't get to meet Richard - he wasn't there anymore. 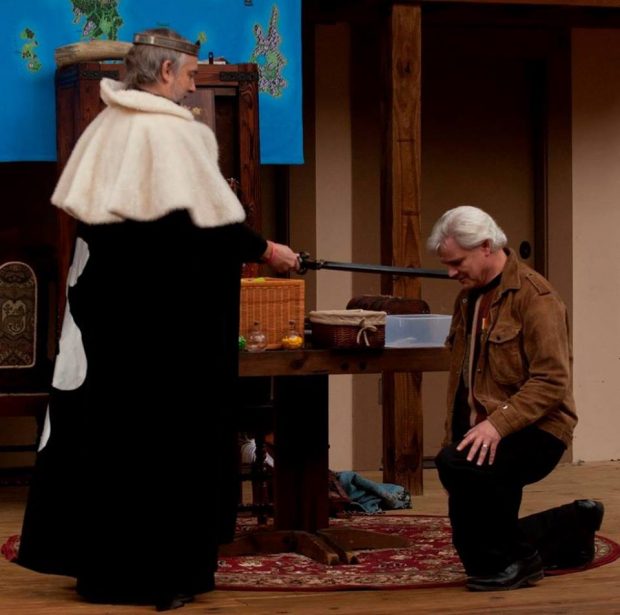 The whole thing had been arranged by Michelle Cadell, his personal assistant (who is Mariah in the Ultima games), and when we met her she was kneeling in the doorway of Richard's old office, packing his items in cardboard boxes with tears streaming down her face, apologising for the circumstances while we stood there feeling awkward.

So we got our tour while there were people walking out with cardboard boxes of their personal items. And we got to see everybody else, but we never got to meet Richard on that first trip.

But Michelle must have reminded him, because a year later, my wife is in the shower and the phone rings. She says: "I get out of the shower in a towel and I pick up and say hello, and hear somebody go 'Hello Paula, this is Richard Garriott, a.k.a. Lord British, and I wanted to find out if you had some time to speak with me.'"

And she's standing there in a towel and the first thing she said was "Fuck you, William,'" because she thinks it's my neighbour messing with her. And there's a pause and she hears: "No. This is actually Richard Garriott."

But he thought it was funny - thank God. That was her opening line to Richard. She told him "fuck you". And he invited us to visit him.

We went the next year and spent three hours at his freaking house hanging out. At the time he was doing the plans for his new castle. He actually had the cardboard model that the architects had made, he takes it down from the shelf and puts it on the floor and sits down on the floor cross-legged like a nine-year-old and says: "This is the design of my new castle."

So he's sitting there with his legs crossed on the floor and he goes: "Come here. You have to see." So I sat down on the floor, literally laying there on my stomach looking at it, and he was getting excited like a nine-year-old over his new toy and I was excited for him and everything just washed away - all that nervousness [about meeting].

We next met him at a convention when his then-girlfriend remembered the wine baskets Paula had made up as a gift. She walks us through to this VIP area and says "Richard, this is the nice couple that brought us the wine."

And that's how we got our in, you know? After that, I'm sure Richard told people "No, no, they're not nut jobs, they're good folks." 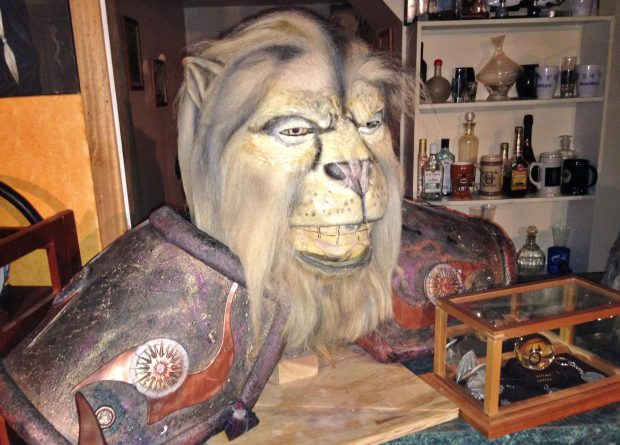 RPS: What do you think are the coolest or most significant items in the museum, either personally or historically?

Garrity:The most historically significant artefacts are the original game development documentation, advertising proofs from the Creative Services department, photographic slides for the original game box artwork, and some digital files of data and graphics from unreleased games which would have been lost if not for our efforts.

Some of the games in the collection are definitely rare from a historical standpoint. The original copy of Akalabeth (Ultima 0), with a certificate of authenticity documenting that this was an actual copy made by Richard Garriott in 1979 on his mother’s kitchen table. Rare early titles such as Caverns of Callisto and Escape from Mount Drash are historical gems as well.

Personally, I love the physical props and costumes from Origin’s full-motion-video games. Having helmets and uniforms used in the production of Wing Commanders 3, 4, and Prophecy definitely gets me excited.

Of course, the heads and other costume pieces of Hobbes (Origin's in-house nickname for the tiger-like Kilrathi character called Ralgha nar Hhallas) and Prince Thrakhath from Wing Commander 3 are definitely prized pieces. Showing a fan of the Crusader series some of the costumes that were used in the actual production of the game brings a smile to my face – I share their excitement every time.

RPS: We talked about how the museum got started, but what was your own first Origin game? What got you started on this kick?

Garrity: I'd bought Ultima IV for my C64 back in 1985, but didn't play it much. The real breakthrough for me was my first PC in early 1991 – a 386 DX33 with four megs of RAM and a Soundblaster! I went to my local Walden Books – back then, games were sold in bookstores – to take a look around. The salesman asked me what type of system I had. When I described my beefy PC, he instantly put Wing Commander in my hands, and said, "This is the game you want." It's been a love affair ever since. 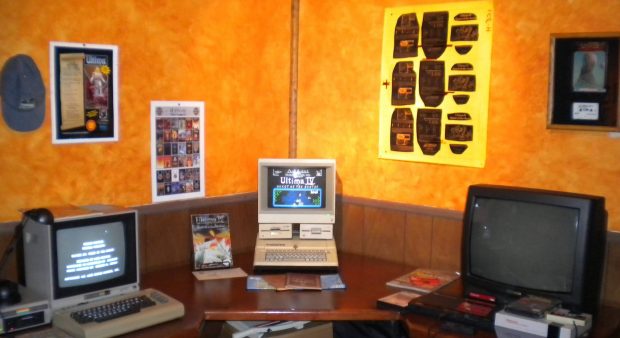 RPS: Your old flyers say "open to the public by appointment" - do you often get people coming to see the collection or is it mostly online now?

Garrity: The collection is not open to the public anymore – that was an idea from a long time ago. Mostly the collection is shown on the Big Box PC Game Collectors Facebook page, and occasionally in presentations to special events, like when EA or a big Ultima fan get-together calls.

RPS: Where would you like the museum to go next?

Garrity: Where should the Museum go next? Well, I need a full organization of all the items in the collection – while I love preserving these artefacts, it's not my full-time job. I have responsibilities as an employee, a husband, and a father, which leaves little time to do a full and complete inventory of the Museum. The upside to this is that I'm always finding new and unusual items that I didn't know I had!

Next would be doing a full preservation on some of the items. The Kilrathi heads came to me in less-than-stellar condition, and were never created to stand the test of time. The foam latex that makes up these costumes is degrading at an alarming rate – Hobbes is literally falling apart. I'd love to get them restored, but that's expensive to do properly. 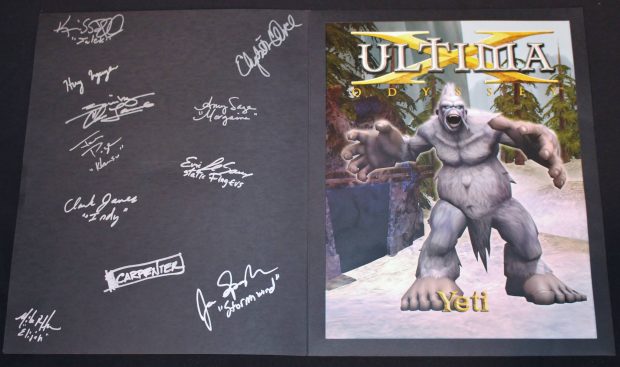 RPS: And if you had unlimited resources - what would your dream future for it be?

Garrity: A brick-and-mortar building would be fantastic – to build a Museum open to the public on computer gaming and game preservation would be the ultimate dream. While keeping the games themselves from degrading, and losing the data, I think the most important aspect is keeping the memory of these games alive.

Giving people a place to actually play these games, look at the scripts and costumes, understand the excitement of those days of early game development. That's all are part of preserving the games' history. Helping people remember these great games keeps them alive.

RPS: What inspires you to keep it all going?

Garrity: Truly? The excitement it generates. I still am knocked out by people's appreciation for these pieces of history. When I see that there are folks out there that share the same passion for these tidbits of 25- or 30-year-old information, it always gives me the energy to continue hunting for another lost item, artefact, or story. I'm also inspired by the developers who appreciate that their long hours of work back then are still valued by the fandom.