My body betrayed me last month, trapping me in my bed when it wasn’t sending me rushing to my poor, overworked loo. I couldn’t sleep, I couldn’t work and so I turned to management games to take my mind off the virus squatting inside me. Juggling budgets, disasters and production chains might not sound particularly relaxing, but there’s also a swathe of low-pressure sims that serve as a brilliant panacea for stress.

Thoughtful walking simulators like Proteus or Everybody’s Gone to the Rapture are wonderful if you just want to wander, free of tasks and diversions, but I find I’m just as likely to get even more stressed when I don’t have enough to occupy myself with. How can I possibly be expected to enjoy a bucolic English village when I am filled with angst (or vomit)? Give me some fish to look after, however, and I’ll be content for hours. 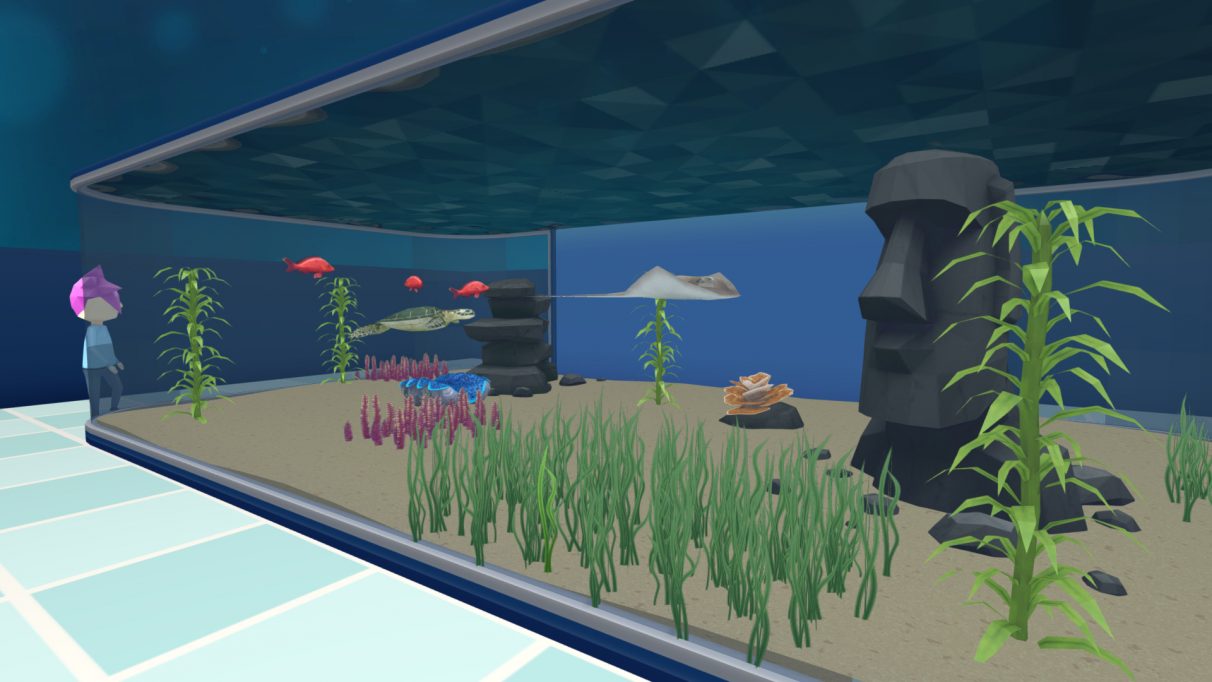 In Megaquarium, you’ve got to be an aquarium designer, savvy small business owner and fish guardian, but it’s also OK if you just want to hop into the first-person mode and wander around your exhibits, admiring your underwater pals. While there are plenty of things to juggle, it doesn’t matter if you drop them. There are challenges, but Megaquarium is never adversarial.

Whether you’re in the sandbox mode or playing a mission, you’re nudged forward gently, not pushed to expand, giving you time to experiment with new tanks and fish. Tending to the wee scaley and tentacled beasties is pretty involved, at least when you’re setting them up in their new home, but much like gardening, there something rather serene about developing these ecosystems.

I spent a couple of in-game days ignoring everything just so I could build a very large and very lovely tank solely for hermit crabs, right in the middle of my aquarium. Then I bought everyone treasure chests to celebrate. That inspired me to go for a nautical, pirate theme, prompting a bout of redecorating. Enough of the game can be automated so you can just play around; crucially, it doesn’t feel like work. 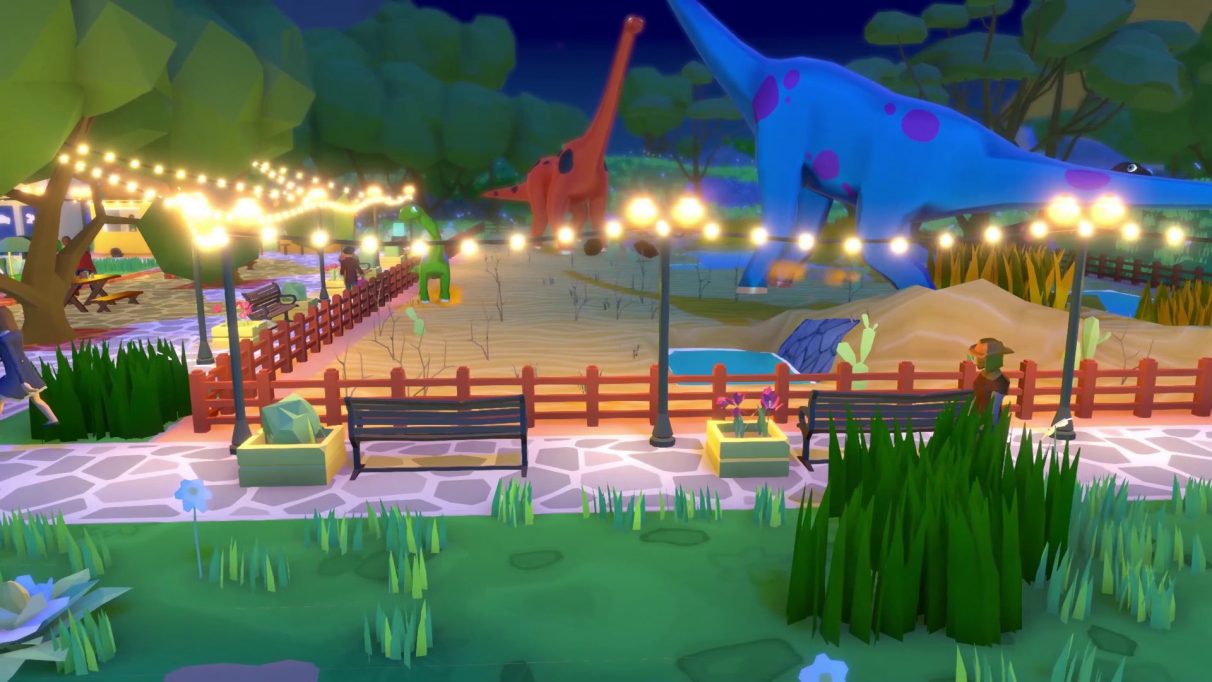 On the subject of tending to colourful creatures, I’d be remiss not to mention Parkasaurus. The early access dino sim puts you in charge of a less ethically questionable version of Jurrasic Park which you can fill with large dinosaur enclosures. Your success is directly tied to making nice places for your dinosaurs to live, rather than your ability to balance your budget or how many scientists you have researching upgrades.

Instead of obsessing over numbers and schedules, you can start transforming empty plots of land into rainforests and savannahs, creating new environments tailored for specific dinosaurs. It’s all very tactile, raising mountains and placing trees by hand, but the terraforming tools are extremely simple, helping you turn a wasteland into a vibrant paradise in a few minutes. And while you’re flexing your creative muscles, trying to make an enclosure that looks appropriately handsome for its important residents, you’re also taking care of their needs and improving your park’s reputation. The management and creative layers work together, so you don’t have to keep switching between running the park and making it look great. And the reward is happy dinosaurs! So you can feel good about yourself. 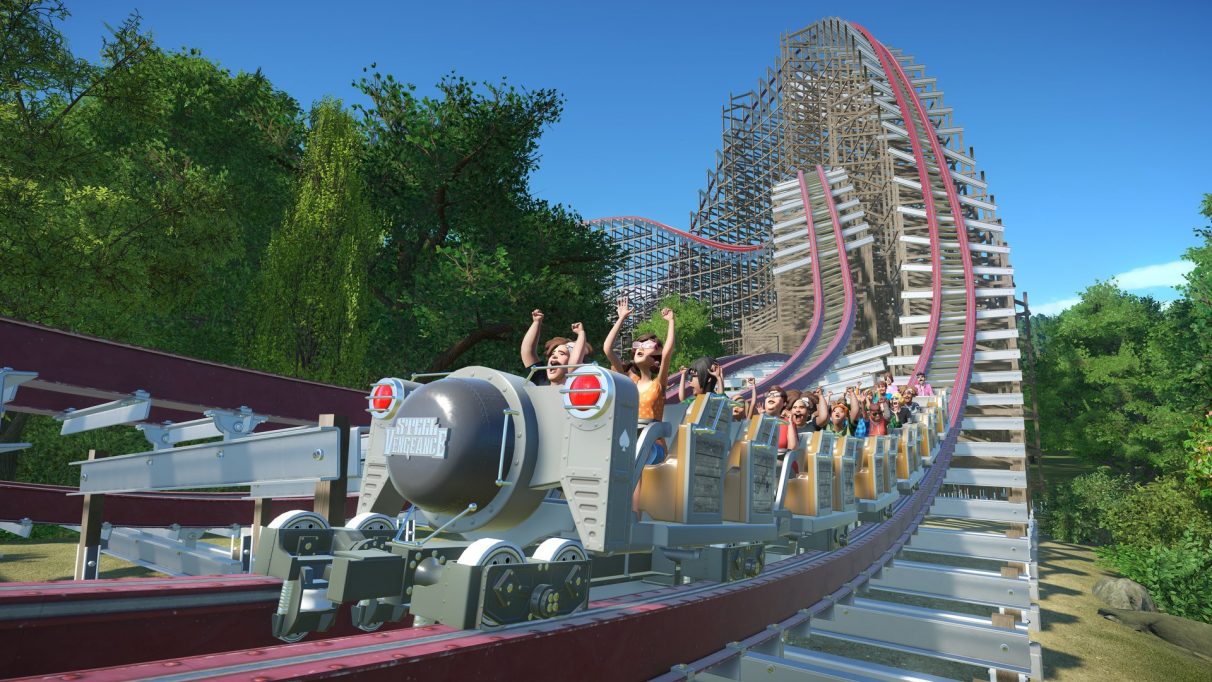 Planet Coaster leans into the creative side of things even more, but it’s also intimidatingly large. There are so many different themes and props and challenges that it can be hard to know where to start, and you’ve still got all of those traditional management wrinkles to deal with, as well. It’s a busy game, but there are islands of calm to be found within its theme parks. It’s a very specific kind of calm, however, where you can lose yourself for an hour just building a toilet, or you can burn through an afternoon fiddling with topiary. 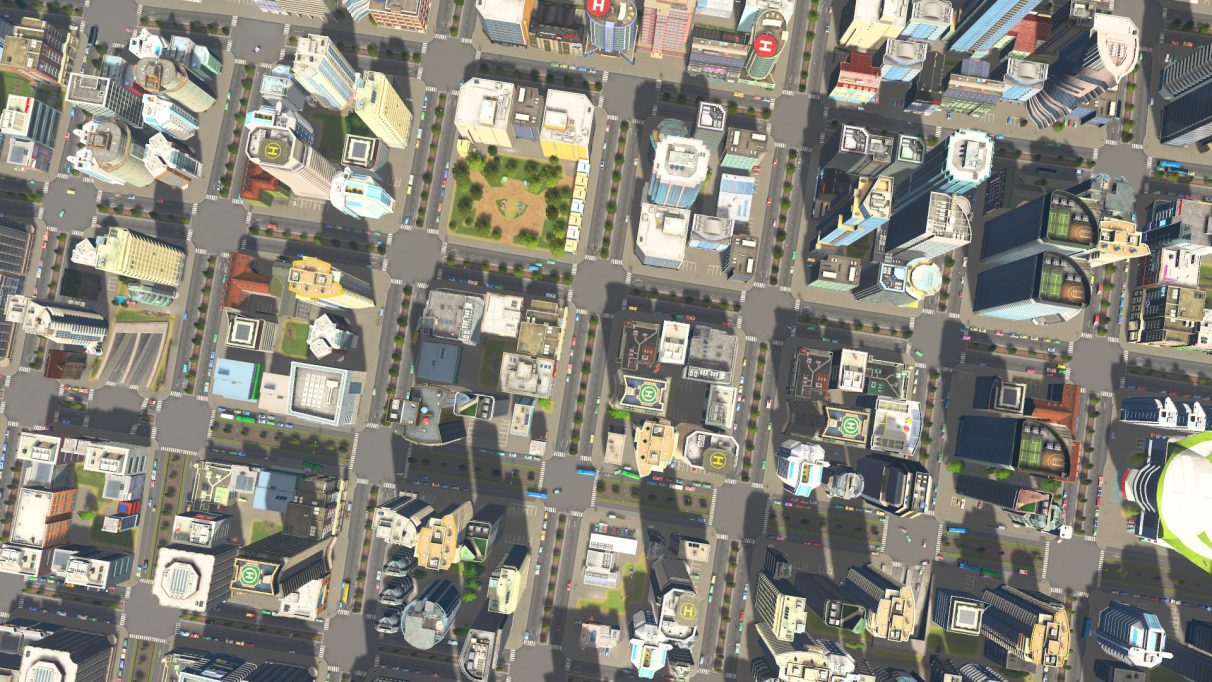 There’s definitely a correlation between how much cosmetic fiddling I can do and how many hours a management game will steal from me. There are moods where I get a kick out of trying to build efficient, green utopias in Cities: Skylines, where everyone’s happy and the taxes are rolling in, and there are few better ways to forget your troubles than losing them in the tangle of Skyline’s glorious roads, but sometimes I just want to make a dumb cyberpunk city where my police station is the one from Blade Runner.

But it’s Stardew Valley, where I live the good life, minding my crops, slowly fostering friendships and chasing chickens, that I find myself consistently returning to. I bought it again when it launched on the Switch because I never know when I’m going to need to escape from some bullshit and relax in my countryside retreat. The whole setup is that you’ve left your busy city life to start fresh, and it’s a gentle, welcoming game that lets you set your own pace. 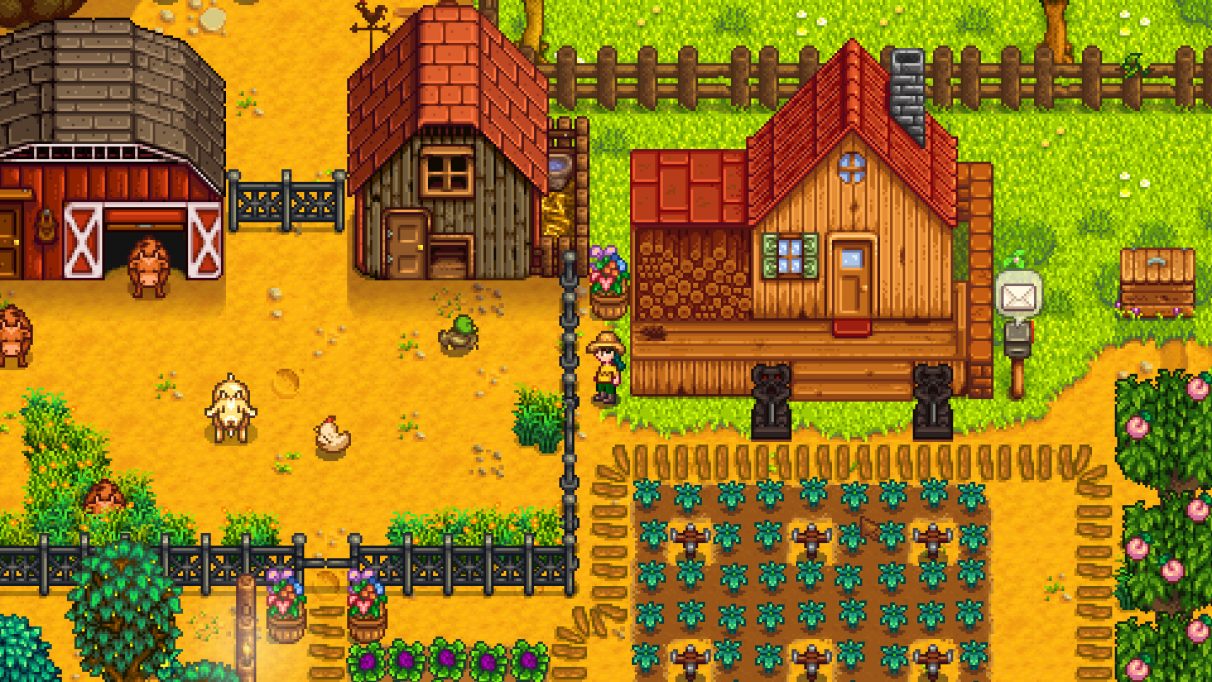 Time passes and seasons change, but Stardew Valley never ends and never threatens you with unwanted deadlines. There’s plenty of work to do around the farm and lots of ways to expand and improve it, but there’s zero pressure. If you want to spend a whole week fishing and flirting, go for it! There are diversions everywhere, but the whole thing is so unobtrusive and easy-going that it never overwhelms. It’s a little pocket dimension full of positivity and community and other good things, which makes it easier to forgive the super-grindy crafting system.

Everything above requires a bit of time investment, and staring down the barrel of a very long game can be a stress trigger, itself. Reigns, then, is an excellent alternative. Along with its follow-up, Reigns: Her Majesty, it distils managing an entire kingdom down to a series of binary choices, swiping left or right to set them in stone. Maybe the Archbishop wants more cash to build a church, so you can acquiesce, giving the clergy more power, or deny him, reducing it. Ultimately it’s all about managing meters, trying not to let any of the three factions or your treasury get too high or low, lest your reign come to an end. 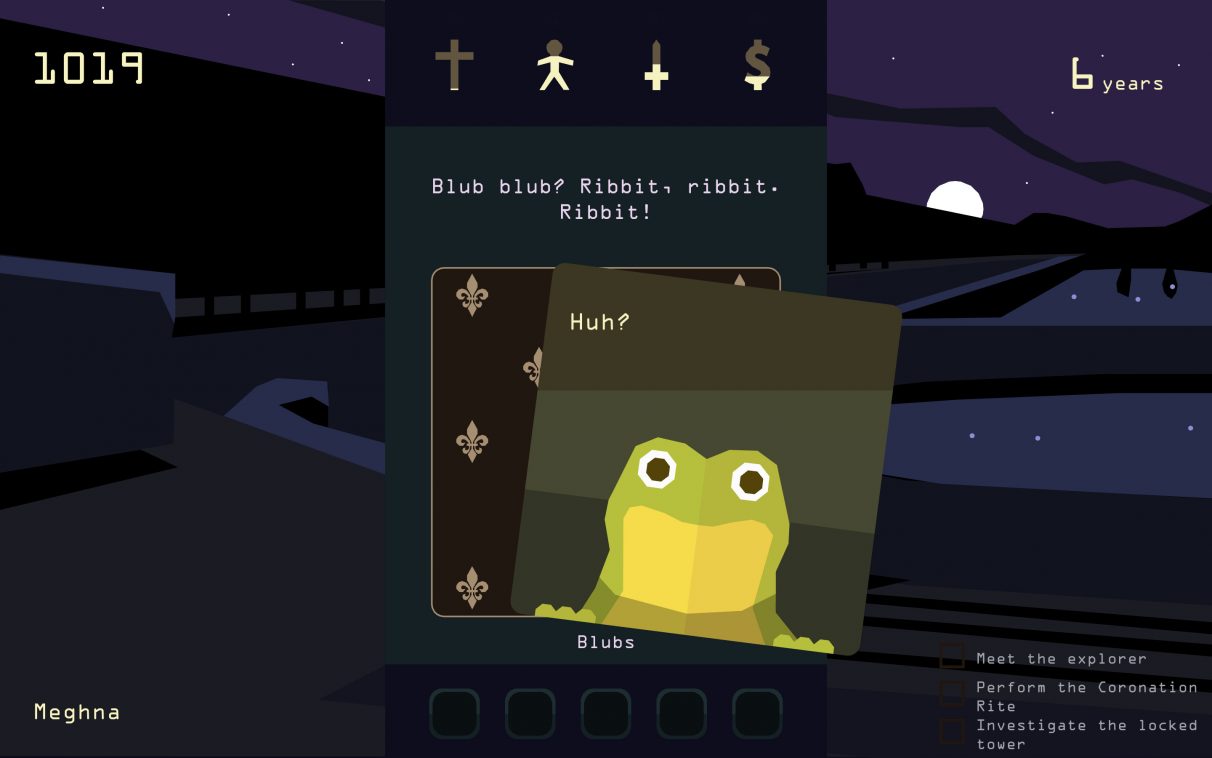 It’s all high stakes and unpredictable outcomes, but reducing everything to two choices is wonderfully liberating. Sometimes you’ll try to do what you think a good ruler would, but inevitably you’ll sometimes just pick one to see what happens, not really caring about the fate of your unfortunate kingdom. There’s something reassuring about the expectation of failure, too. Your reigns will be cut short time and time again, but that’s OK because each life is its own self-contained story, transformed by different choices and a growing deck of scenarios and characters. And throughout all these lives and crises, all you need to do is sit there and swipe. Given that, it’s more of a comfortable fit for phones, but the PC version is perfectly functional.

There’s an almost therapeutic rhythm to even the most intense management games. Frostpunk, while absolutely not the sort of thing you’d want to play when you’re feeling miserable, still has a hypnotic loop that can blinker you to the world outside its chilly virtual city. With its day and night cycle and work shifts, it creates a routine that’s comforting and familiar, something to hold onto even when the temperature starts to plummet and people start dying. The repetition and structure mean that good management games get you into a groove, guiding you organically from one crisis or task to the next; when you slip into that routine, even running a disaster-prone Martian colony or a struggling medieval village can be a way to unwind.

If you’re not convinced and relaxing with a management game sounds as wrong as a working holiday, take a gander at our list of the most relaxing PC Games instead.