Cities: Skylines has always had an environmental bent - one of the first things you can build is a wind turbine - but with the Green Cities expansion, cleaning up polluted cities has become a major focus. There’s a slew of new buildings and policies that make it a little bit easier to keep your citizens from living under an oppressive layer of smog.

How easy, though? I’ve started up a new city to find out. My goal: a completely pollution-free utopia where everyone is happy and healthy. This is probably the nicest thing I’ve done in Skylines; certainly it’s nicer than the time I tried to flood my entire city in poo, or the time I turned off the heating to see how long it would take for everyone to freeze to death. 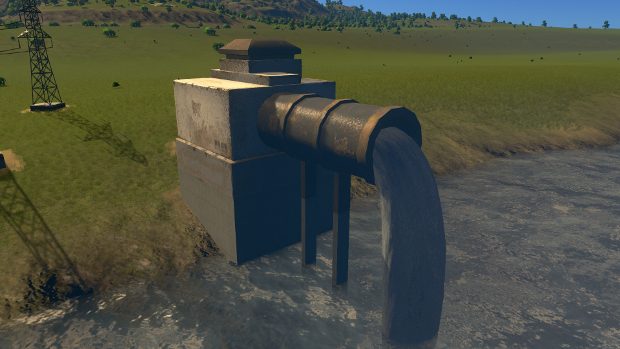 Even the greenest cities have to start off dirty in Cities: Skylines. To avoid sewage clogging the streets, creating a poo plague, all of that effluence needs to ejected into the nearest body of water. Cleaner options open up later on - unless you’re playing with everything unlocked from the start - but until then, the fish are just going to have to suffer.

Industry is another problem. Default industrial zones are full of polluting factories, but they’re necessary for the tax income they provide. At least power isn’t a problem. Though they generate only a small amount of electricity, wind turbines are nice and clean, even if they do cause a bit of noise pollution. Courteous mayor that I am, I plonk them down away from the residential area. 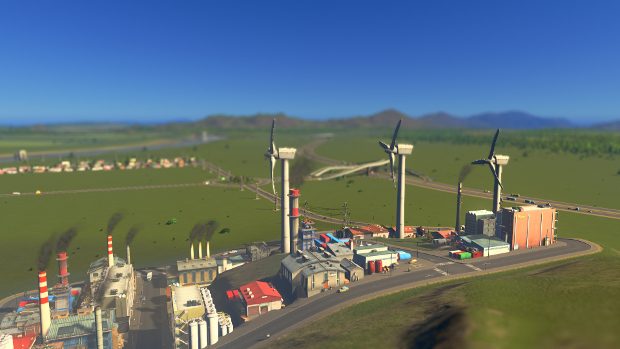 These initial steps are largely identical to a typical Cities: Skylines early-game, but as more residents move into Verdant - I know, you’re jealous of my creativity - new options, buildings and policies become available. Finally I can start cleaning up this town. People are going to get sick of how green it is. Don’t think you can have too much clean air? I won’t rest until I’ve proved you wrong.

One of the first things I unlock is a recycling centre, a cleaner alternative to a smelly landfill, which turns waste into new goods that can be sold to local businesses, generating more tax revenue as a result. After I build it I start to notice that while it’s certainly less toxic than a rubbish buffet for seagulls and rats, a small amount of pollution is still seeping into the ground. Later, I’ll be able to reduce these small islands of ground pollution through environmental policies, but until then, I just need to keep them away from my citizens. 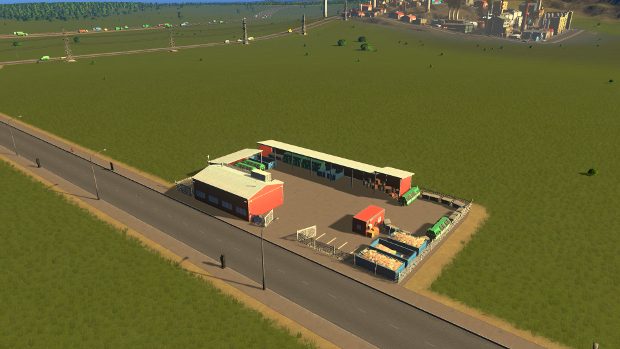 My recycling centre is the talk of the town, a shining beacon that lets everyone know that Verdant isn’t the sort of place where we let rubbish pile up. Now there’s an even greater demand for residential zones, so I diligently expand the neighbourhood and welcome thousands of new residents to my burgeoning utopia.

This jump in population means that I can start fine-tuning Verdant with specialised districts. It’s here that Green Cities really starts to work its environmental magic. I immediately set about painting my sprawling suburb with the district brush, which in turn lets me set policies that affect the whole area and, more importantly, transform it into a self-sufficient, eco-friendly neighbourhood by picking the new residential specialisation. 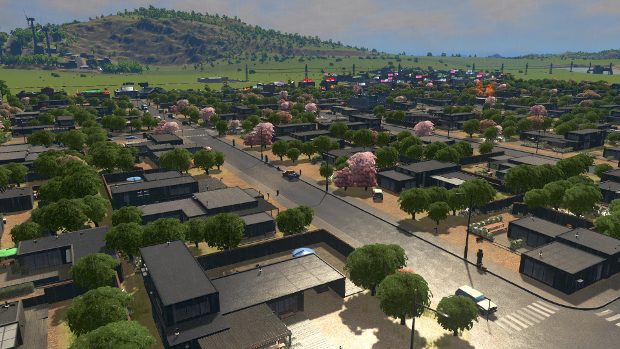 Every time I change a district’s specialisation, there’s this brief moment of horror. All the buildings are suddenly torn down, homes and businesses demolished, leaving behind sad, empty plots of land surrounded by roads to nowhere. Worse, my tax income quickly vanishes, putting me in the red. It’s only temporary, but it still freaks me out a little bit, and there’s always that fear that new homes and business owners aren’t going to move into the new district fast enough, putting the budget in even more jeopardy.

There was no need to worry this time, thankfully. Buildings start to erupt out of the ground to a fanfare of drilling and hammering. The old buildings that once sat in the district were a random assortment of houses that came in all shapes and sizes, but these new homes are slick, modern and largely uniform. I’m in two minds about the aesthetics. Individually, I think the homes look great, but I miss the messy diversity of the old neighbourhood. And the whole area looks unexpectedly less green now, as the new houses don’t have grass in their gardens for some reason. It’s all been replaced with… is that gravel? Gravel is just the worst. Walking on it calls to mind the sound of grinding teeth - it’s just horrible. 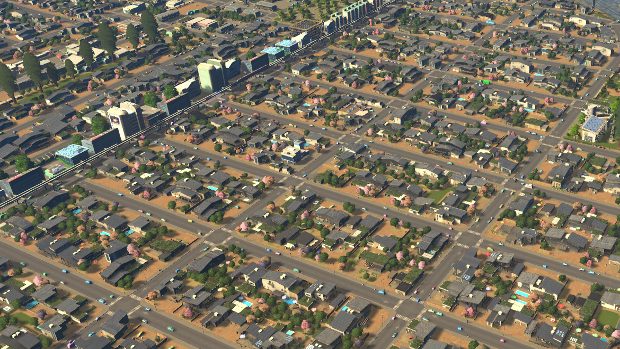 Ignoring the aesthetics, I’m still fairly happy with my self-sufficient suburb. It doesn’t generate as much tax income, but this is balanced out by a smaller environmental footprint. It requires less power, so I can keep using wind turbines instead of slapping down a nasty coal power plant. I’m not 100% sure, but I think burning fossil fuels is a bad thing when you’re trying not to flush the planet down the toilet.

Commercial districts can be similarly specialised with organic and local produce shops that also provide charging ports for the adorable wee electric cars that are now zipping down my streets. These districts actually consume more electricity, but truck traffic is reduced by a whopping 50%, lowering noise pollution, which is now determined by traffic congestion instead of road type, and clearing the streets of traffic jams. 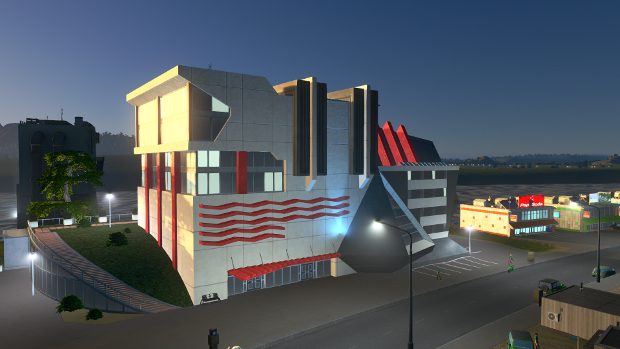 Green Cities takes a holistic approach to the environment, so it doesn’t focus exclusively on kicking pollution’s arse. Community schools, art schools and technology institutes offer a cosmetic alternative to the regular education buildings, while gyms, swimming pools and saunas can take care of areas that need a bump in healthcare but don’t require an expensive hospital. I pepper Verdant with these new buildings, and my happy little citizens respond by levelling up, their homes getting fancier. How fancy? So fancy that they’ve got grass roofs.

Everything has started to come together, and after I switch my heavy industry to farming and forestry, I’ve almost eradicated pollution entirely. At least, it looks that way unless you walk by the river, which has, I’ll admit, started to pong just a wee bit. It could be worse, as I’ve upgraded my sewage treatment facilities, but there’s still a very obvious and very unpleasant brown stream ruining the waterfront. I’ll need to expand the city before I can unlock the advanced stuff that filters out all the jobbies, condoms and nappies.

So it’s time to cross my shitty river and start building some high density zones on the other side. Just look at my lovely green skyscrapers. 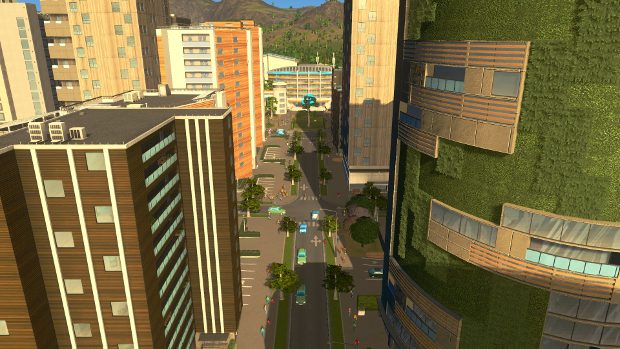 Yes, that’s grass on the side of the building. Aside from one fatal flaw, it would make a pretty nice park.

With my grass-covered apartments and a flash high-tech office zone, the new residents start pouring in, fodder for all the tech companies that have decided to make Verdant their home. The high-tech specialisation produces considerably more tax revenue than normal offices, so I’m rolling in cash now, but sadly there will be no time for diving into giant vaults of money for me - I have to be responsible and clean up this dumb river. It’s been my white whale, after all, mocking all of my efforts to make pollution a thing of the past.

A few eco water treatment plants and one floating garbage collector are enough to fix all the damage from years of water pollution. When I look at the pollution overlay, there’s 0% ground pollution and 0% water pollution. Everyone is extremely healthy, too, and has plenty of access to education, parks and pristine water. I’d like to see one of those smug Planeteers do a better job. 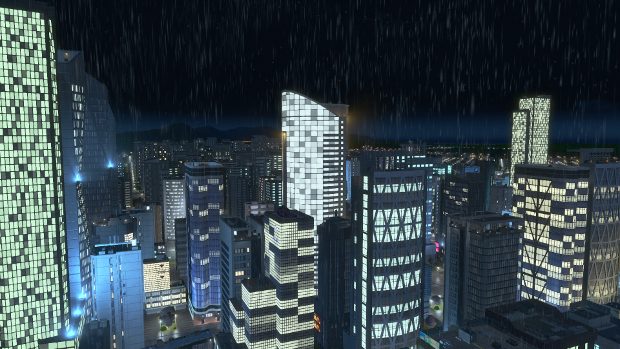 My weird beef with cartoon characters aside, I wanted to see how easy it would be to grow a green city, and despite the cost of some of the buildings, it’s been incredibly simple. Green Cities introduces solutions to problems that the base game tackled, but never let us completely fix, rather than adding another layer of complexity. In a game with a lot of DLC, there’s always that risk of feature creep, but all of the new policies and buildings slot into the game without making it seem bloated.

There’s also something endearingly optimistic about Green Cities. It posits a world where politicians and lobbyists don’t create countless roadblocks, and where dependency on fossil fuels has become a refuted myth. It’s inspired me to do some further reading, too. I’d never even heard of things like solar updraft towers before building my utopia. Now I feel bad about all the times I tormented my citizens.

Cities Skylines: Green Cities is available now for Windows, Mac and Linux, via Steam for £9.99. It requires the base game to play.