I was told before playing Metro Exodus that, as with the previous Metro games, it is important to think before you act. Seize every quiet opportunity to craft another med kit, a molotov, another filter for your mask. Continually take stock of your, er, stock. And it’s true, there is grim satisfaction in sneaking up behind a weird anti-electricity pseudo-Christian cultist and knocking him out without making a sound. In disarming the noisemaker traps before you run into them. In taking out a ghoul-like Humanimal with a throwing knife to the head, and pulling the knife out to use on something else. Reduce, reuse, recycle, as they say.

But it’s also good to pull out a sawn-off shotgun and blast a Humanimal in the face with it, alerting all the other Humanimals in the area so you can faceblast them as well. 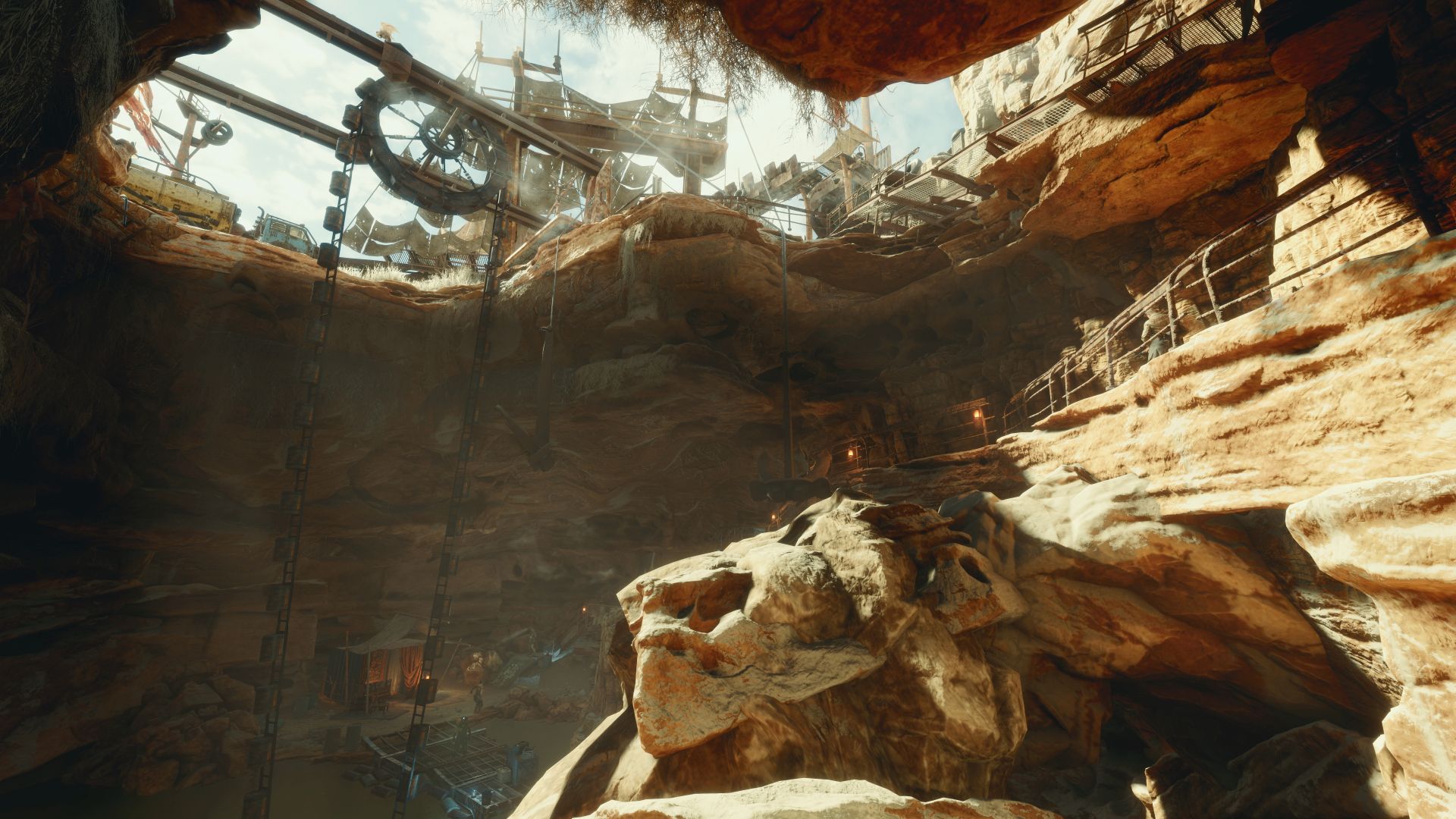 It may have been the setting. The shotgun was the most Mad Max-y of the weapons I had at my disposal, you see, and while I had access to both the icy flood plains that Edwin saw and the autumnal forest Brendy explored in his Metro Exodus preview, I also got to play around in the big desert map. Metro’s story spans seasons as well as miles. As you go, you pick up more people, almost all of whom talk like how I imagine old school Soviet propaganda was. I found this very entertaining, although probably not in the way intended. A small girl told me my lovely wife was “very kind and strong”, the most natural of compliments, and I had to studiously chew at my knuckle for a few seconds.

By the summer, Artyom and his train of rag tag survivors roll into sand country. It used to be a sea, I think -- or at least, the sea used to be a lot further in than it is now. There are boats and tankers stranded, backs broken, in the middle of nowhere, and a lighthouse on an island jutting out of nothing. 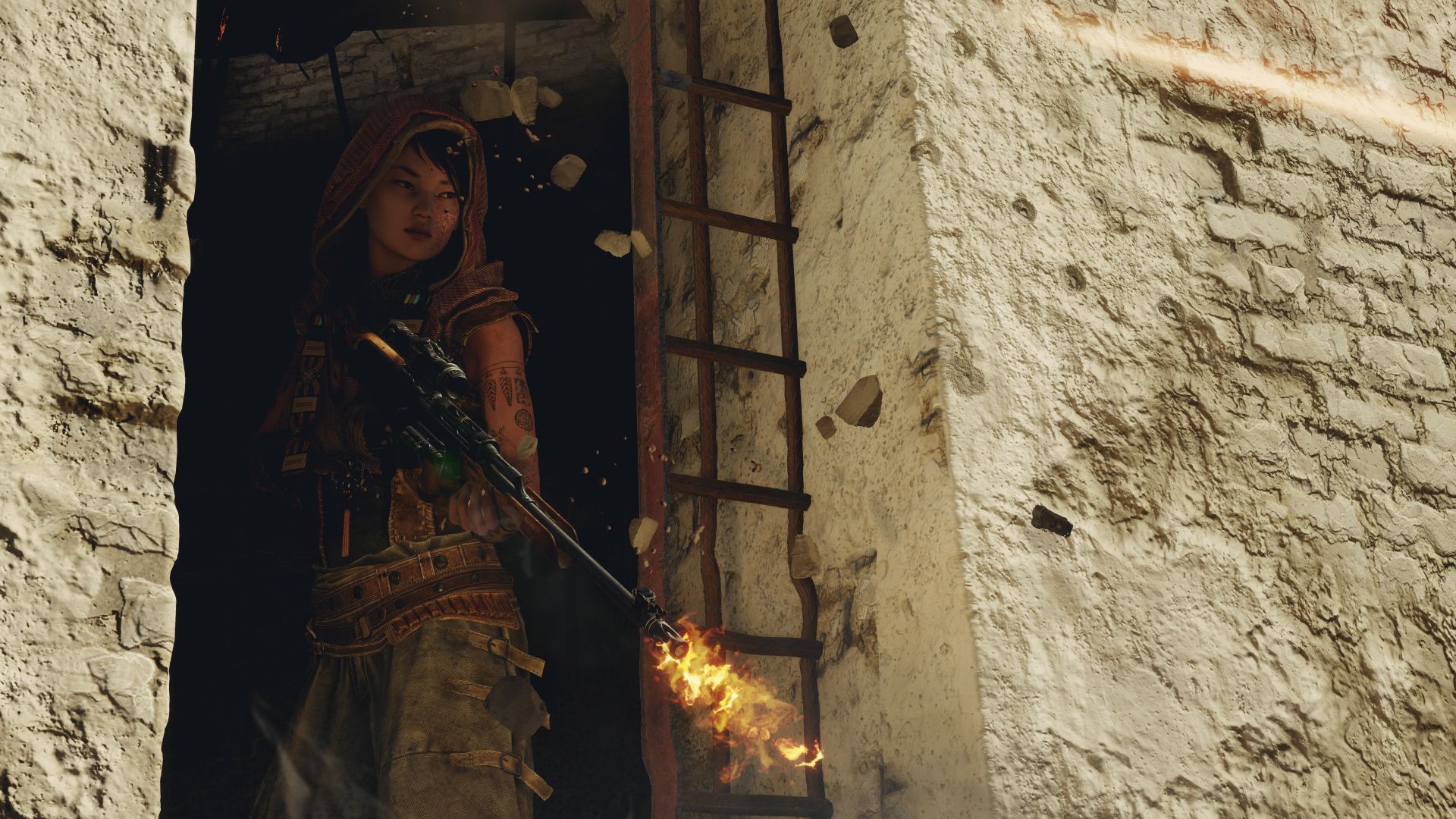 The new, open maps are designed so you can spot landmarks and find your way around easily; early on when you arrive somewhere, someone will prompt you to use binoculars and point out the key bits you might like to explore. Metro Exodus doesn’t have a mini map, you have to stop and get out an actual map with a compass to see where you are, and this works because the areas aren’t too big or cluttered. At the same time, though, crossing the same bit of ground at a crawl because i didn’t want to alert the same bunch of mutants that keeps respawing there no matter how many times you kill them, did become tiresome.

Moving slowly means I noticed some open world jank. Watching the same dog monster cycling through the same patrol animation every three minutes spoils the magic a bit. Maybe if they stayed dead, I would’ve felt like I was conquering the land a bit and get things done quickly. But that’s counter to the feeling of Metro. So the open maps can push you towards being more of an action hero and whipping out that shotgun. Yeah, I’ll use up valuable ammo and alert every other dog monster in a mile radius, but at least I won’t have to creep through these bushes for the fourth time. 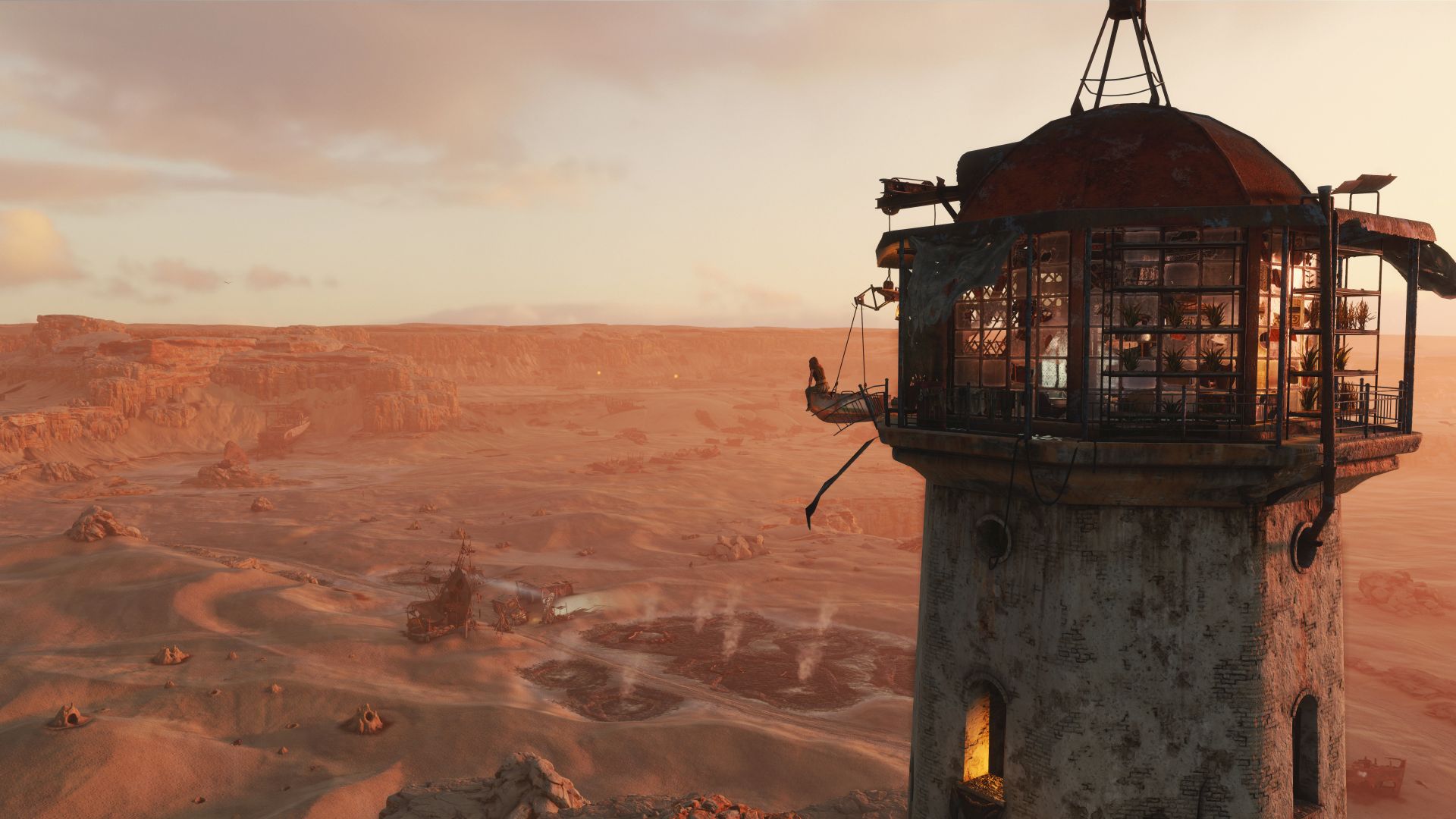 The desert was my favourite area that I played, because there’s less of that. It tricks you, so you stop trusting it almost immediately. The ground, in some places, is littered with Humanimals. They’re the same yellowy colour as the sand, and sometimes obscured with patchy grass, so you tread on them without realising. Then up they pop, screaming, and all their mates wake up as well. Sometimes you do see one, and send a knife into it, only to find that it was already dead. Things like that keep you constantly on edge, reminding you of the days you were confined to dark tunnels.

The open areas are fun, but Metro is still at its best when you delve underground again. A lot of the missions, both optional and main story, send you into tunnels or cramped buildings. The stand-out of them all for me was also in the desert, exploring an old power station. It’s full of giant armoured spiders who climb the walls and pop out behind you. But light makes them scream and burn.

You have to shine your crank-powered torch at them, forcing them to scuttle away into the corners. This works fine against just one, but if there’s two or three you end up swinging your torch around wildly as they pick at you from all sides. You blunder into curtains of web, sometimes knocking dozens of baby spiders down around you (the animation of them crawling over Artyom’s in-game arms made me shudder in real life). Your gas mask is cracked, so you’re gasping a bit. Then you realise your torch battery is starting to run down…

It’s tense, creepy, frustrating in the best way, and I ended up loudly swearing as I made a desperate break for the exit. At these times you do feel like you’re on the back foot; like the world doesn't belong to us any more. Up on the surface it feels deceptively easy to sigh, push another couple of shells into the shotgun, and explode some skulls. In the dark, underground, the spiders move too fast for that, and there’s nowhere to run... Good practise for our inevitable apocalyptic future either way though, eh?