If you click on a link and make a purchase we may receive a small commission. Read our editorial policy.
Developer: Lasso Games
Publisher: Lasso Games
Release: Out now
On: Windows
From: Steam, itch
For:£11/€12.50/$15

"I have ninety minutes to stop a nuclear bomb from going off, so I've given up on arresting and just started throwing people off buildings," I told the RPS hivemind. This was a half truth. I'd been trying to figure out how to throw people off buildings all day.

That is the problem with MiniLAW: Ministry of Law, the hectic dystopian action game from Lasso Games. It is very nearly excellent, but frequently undermines itself with terrible controls. 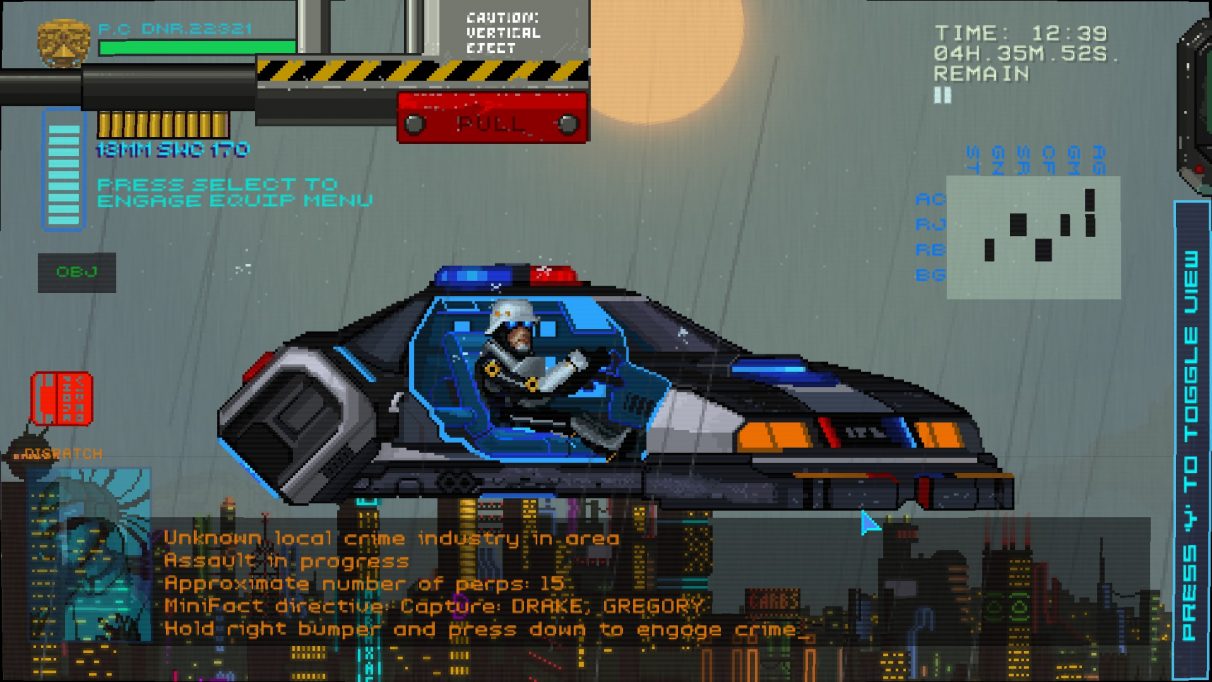 You are essentially Judge Dredd, with a hint of a whirry Robocop. A future cop and occasional executioner in a suit of power armour, with a flying car and a techno-magical handgun. Urgent crimes appear on a map as glowing red city blocks, which you fly to and investigate, dropping out of the sky with a satisfying pull on an eject handle. Suspects will lurk somewhere in each building on the block, and you're tasked with putting them down however you see fit, while taking a specific person of interest alive.

Each suspect has a health, a stamina, and a morale bar, the depletion of which will cause a kill, a knockout, or a surrender respectively. The less lethal your approach, the more requisition points you'll be awarded (barring the occasional instruction to execute someone, which you can ignore for a trivial cost), and the more likely you'll be to find useful intel.

It is, of course, not that simple. Yelling at suspects to surrender seldom works unless you rough them up first, and a few must be beaten and shot to within an inch of death before they'll give up. Ranged non-lethal options are mostly weak, and rarely your best bet. Although your suit can resuscitate you, it's not unlimited, and the more times you're downed without going home to repair, the more vulnerable you are, as you move less smoothly and your screen distorts, throwing off your aim. Unless you invest heavily in armour, even humble pistols or bike chains hurt. Even with upgrades, heavy weapons users can put you down repeatedly if you're careless. 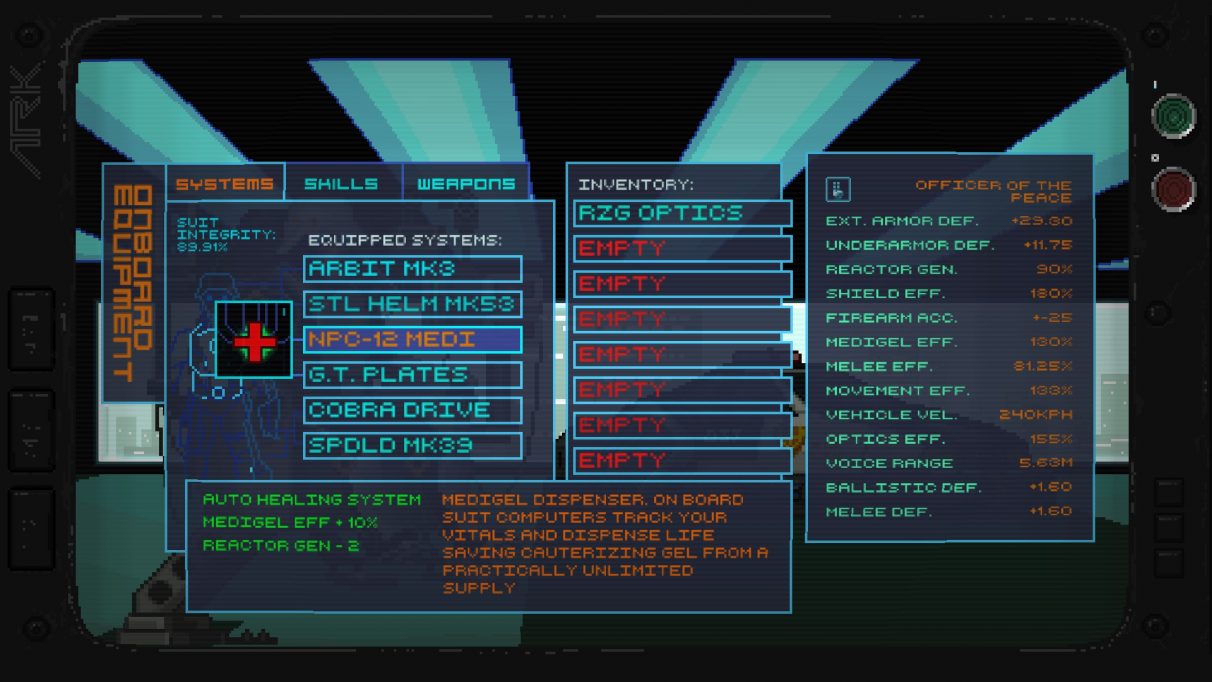 Those upgrades make a huge difference. In exchange for requisition points you can buy equipment which alters the balance of your armour, accuracy, speed, melee power and so on. The auto-heal, in particular, is a rare game-changer well worth the expense. There are also skills you can permanently boost. Sensors increase the range at which you can identify targets, driving makes you more efficient on the strategic map, 'diplomacy' ups the range and power of your calls to surrender. In addition, you can buy alternative weapons for increased firepower, or more options such as taser gloves, incendiary bullets, or flashbangs.

Also, you can get explosive bullets. They are hilarious. I wish I had a video of the first time I fired one, unthinkingly, at a suspect who two friendly AI beat cops were already whacking with truncheons. The whole crowd was instantly launched off the screen, leaving nothing but a large puff of smoke. That's something I particularly enjoy about Minilaw: in a setting that's ostensibly grimdark and distasteful, it's funny. The brutal, solid crunching and thumping as you repeatedly crack a gunman's crown with your pistol, plus the gunshots and the smack of bullet impacts, should be horrific. But when you grab someone and feck him through a window, he'll often let out a ridiculous scream that turns the moment into sheer slapstick comedy. Kicking in a door, shooting two gunmen, then yelling "stop or I'll shoot" is straight out of an old Robin Williams bit, and shouldn't make me cackle so much. 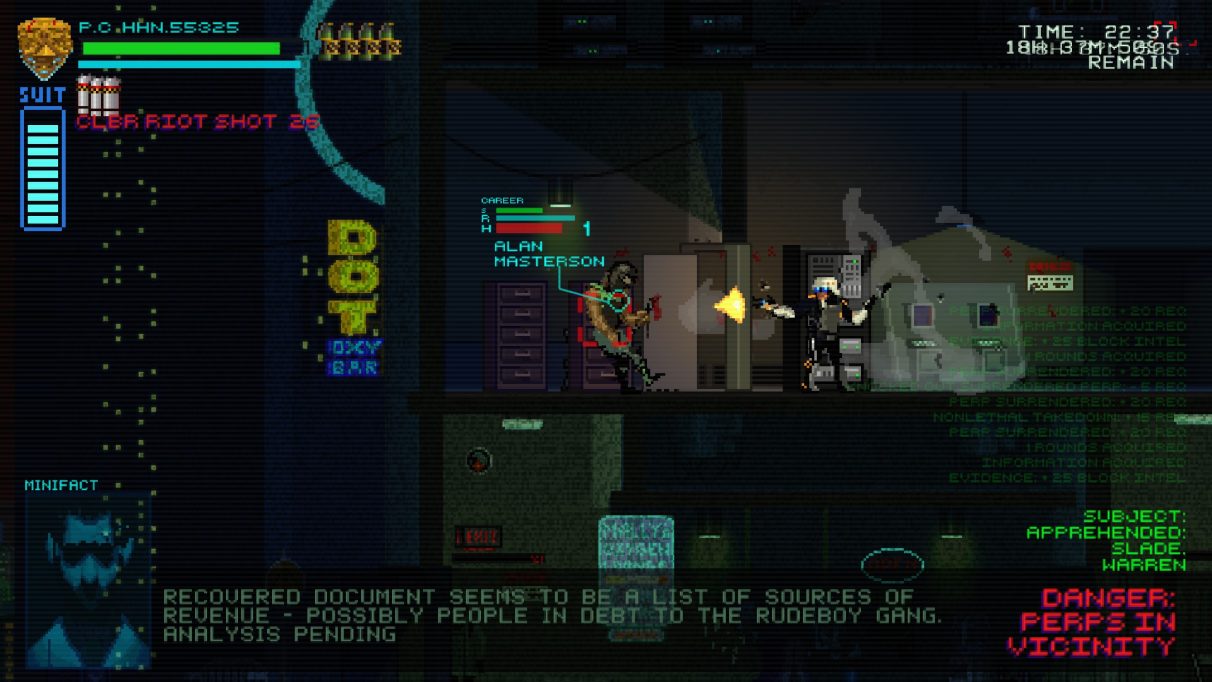 When you approach a building you'll sometimes hear gunfire, as hostiles shoot at the civilians who mill around, existing only to liven up the levels and get killed by crooks (in a manner that's weirdly reminiscent of Death Wish 3 on the Spectrum). Many of them look identical to criminals until you get close enough, and I got a good chuckle out of the oblivious guy in a VR headset, pointing a toy gun around. They add a lot to the atmosphere, and again, the cartoonish excess of one of them suddenly plummeting into the ground next to you takes all nastiness out of the equation.

Minilaw's animations, its presentation, and in particular its sound design, make for a fantastically satisfying action game with some fast-paced tactical considerations. Or at least, they would, if it wasn't far, far too easy for everything to go horribly wrong because of the clunky controls. 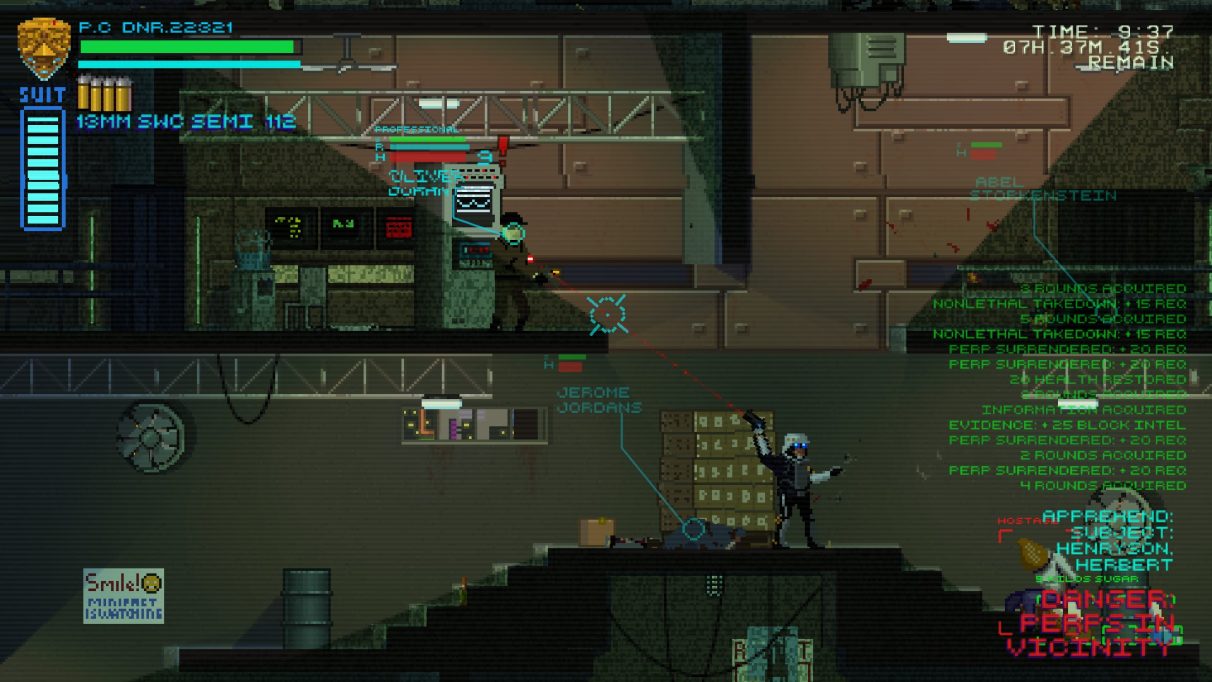 I wanted to let it go, I really did. My first try at Minilaw was during early access three years ago, and while Lasso have made improvements since, several things you need to do frequently are still too awkward and unreliable, with enormous potential to accidentally do the wrong thing. Jumping, for example, sees your plodding not-Robocop lurch explosively upwards or forwards, and only sometimes grabbing the ledge you want him to.

Then there are the keybindings. Even after reconfiguring, I found mouse and keyboard maddening, and a controller still clumsy. There’s just too much going on. Taking cover is stuck to the same button as interacting with anything, while the fact that "punch" and "shoot" share the same button inseparably is plain disastrous. The difference between the two is whether you're also aiming - which you will be almost all of the time, because you have to aim in order to move the camera. There are minor cursor irritations with a controller, too. In particular, it's irritating that you have to dial numbers using directional keys, and not the number pad. And as for melee? Lord.

There are two dozen melee combinations, but pressing block at the right moment, then double tapping left, then down, then the right trigger, while also pressing the 'shout' button and possibly having to think about dropping in and out of cover too is far, far too much. The throwing move I mentioned earlier is one I struggled with for ages. It's easier, safer, and less frustrating to just headbutt everyone, or give up and shoot them. You'll accidentally shoot people all the time. And god help you, when you come across one of the occasional elite characters. 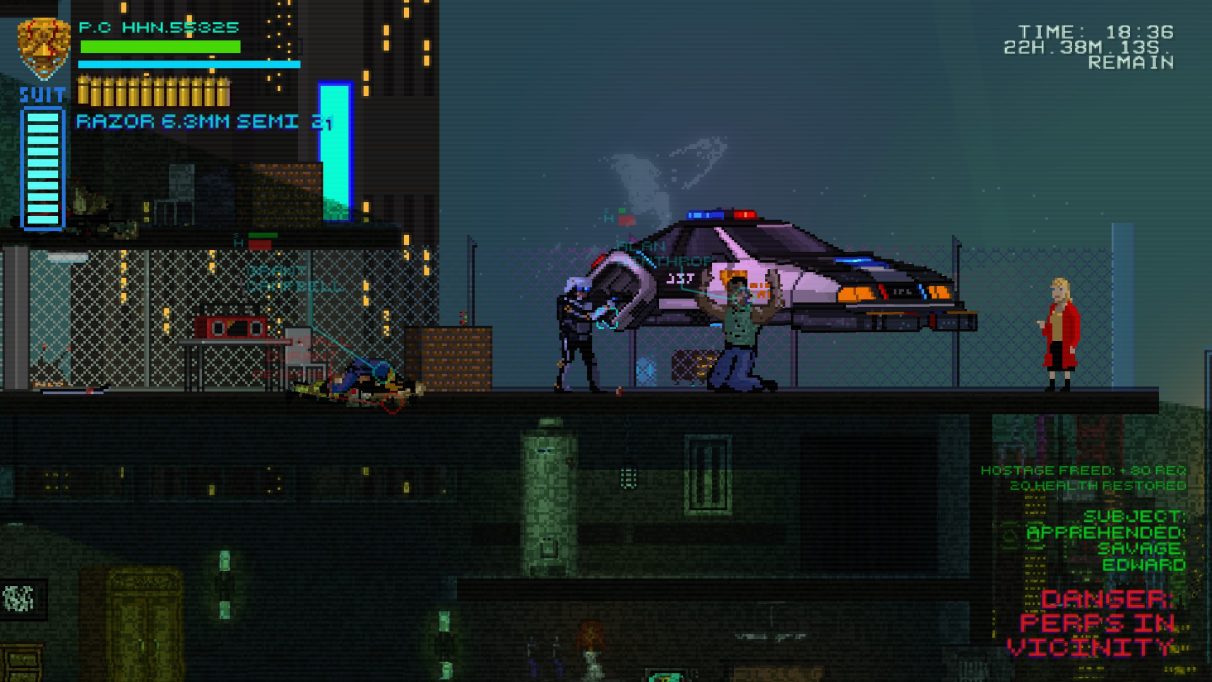 Almost completely bulletproof and impervious to threats, these fast, hard-hitting enemies are also extremely tough to fight by hand, and can rapidly take you from full health and armour all the way to death. They're mercifully rare, and I’ve killed several (I've even arrested one), but I honestly have no idea how. I think you're supposed to block and counter their blows, but I could never tell if this was working, and had to resort to dashing back and forth, spraying hundreds of bullets at them to buy time, while hammering the grab and headbutt buttons in the hope that they'd fall before they downed me again, causing all their health bars to replenish. They are hateful. And that's if you're lucky enough to have them come at you alone, instead of alongside their heavily-armed friends. 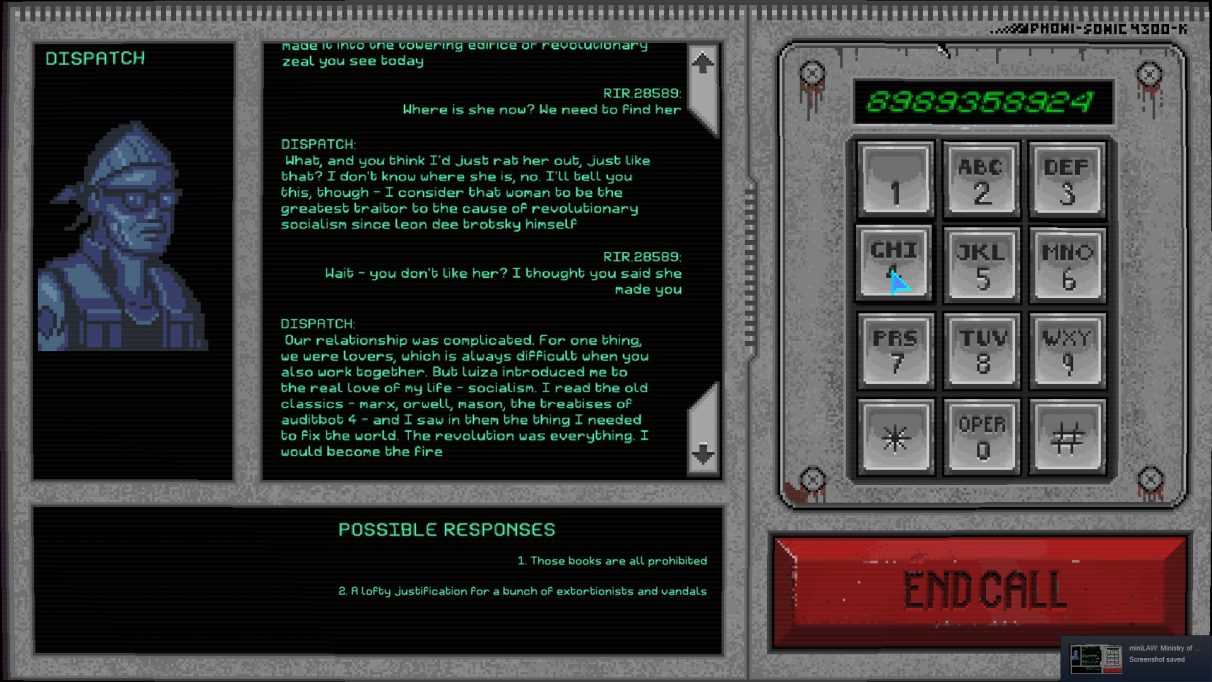 Thankfully, you can relax any time between busts and pursue investigations, which are brilliant. They're an intermittent metagame in which you follow up leads by calling people to question them, and they provide not just welcome downtime, but a little direction in amongst the constant action, as successful interactions often help you locate gang headquarters. In theory, they can even lead to the location of the bomb, and thus winning the game, although I've yet to succeed on that front. I suspect a few are a little buggy, as they never seemed to fully resolve, but I can't be sure, and I might have just needed to pursue specific gangs more thoroughly.

The chunky buttons, touch tones and dial up modem noises in these segments are fun, but it's the writing really elevates them. And while the corporate fascist helltown of the setting is not subtle, it's less shallow than these things are in most games. You're obviously an agent of a villainous state, but the gangs you're fighting are full-on monsters, and most of the people you can be nasty to... kind of deserve it. You can sometimes be genuinely nice to witnesses and informants in phone calls too, although your deadpan radio support pal discourages it.

Also, there's a strong chance that any promise you make will be broken by your bosses, making you hesitant to make promises in future. More than once I promised leniency to informants, only to discover they were later treated horribly once the decision had been taken out of my hands. This is far more like how a heartless administration actually works, than just outright banning kindness. It gives you options on paper, but then applies indirect pressures to make them worthless. It's a nice touch, certainly better than encouraging you to butcher people, and then slagging you off for butchering them. 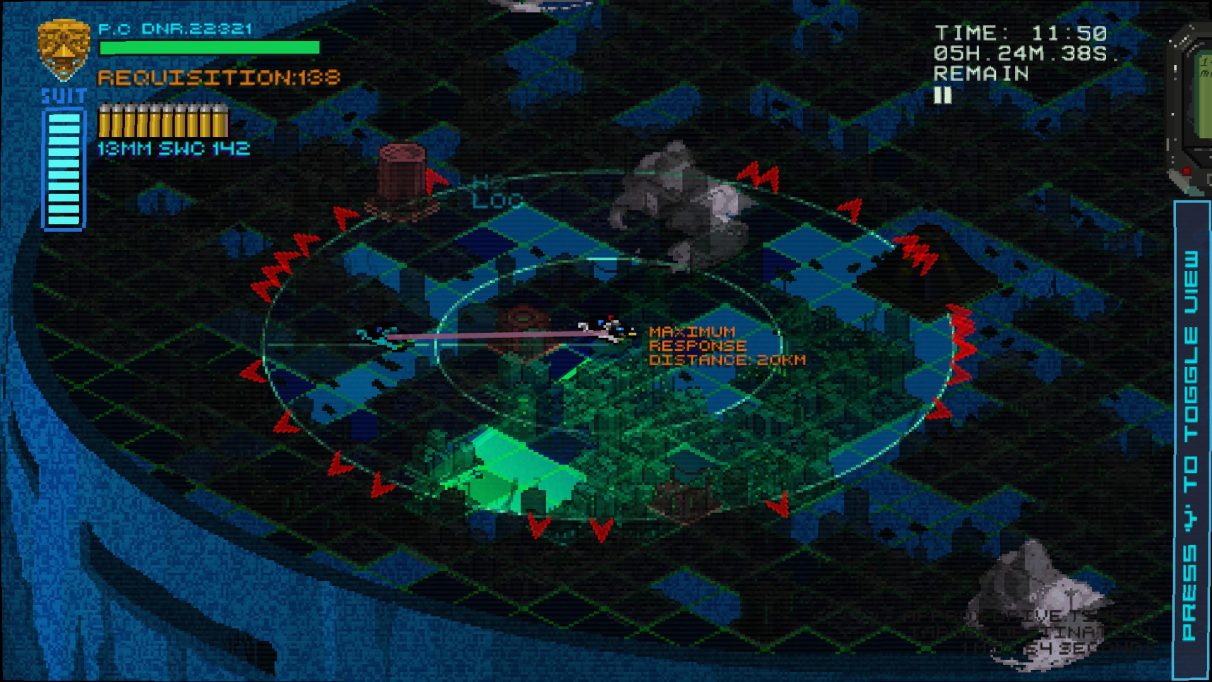 The investigations bring MinilAW's setting, and crucially, its tone to life. It would be incredibly easy for a game like this to proselytise, as though we need to be told that murder is bad, or alternatively to glorify the evil regime it depicts. But its humour and presentation make it into a self-aware game that's neither intensely satirical nor blind to its own implications. It captures a similar tone to Robocop, in fact, allowing us to enjoy its absurd violence, and have a bit of fun with the role. When speaking to one of my informants I had the option to say "Who are you again? I've forgotten". One witness happily ended a discussion by saying "over and out". I responded with "I'm the one who says over and out". That little hint of daftness was much needed. 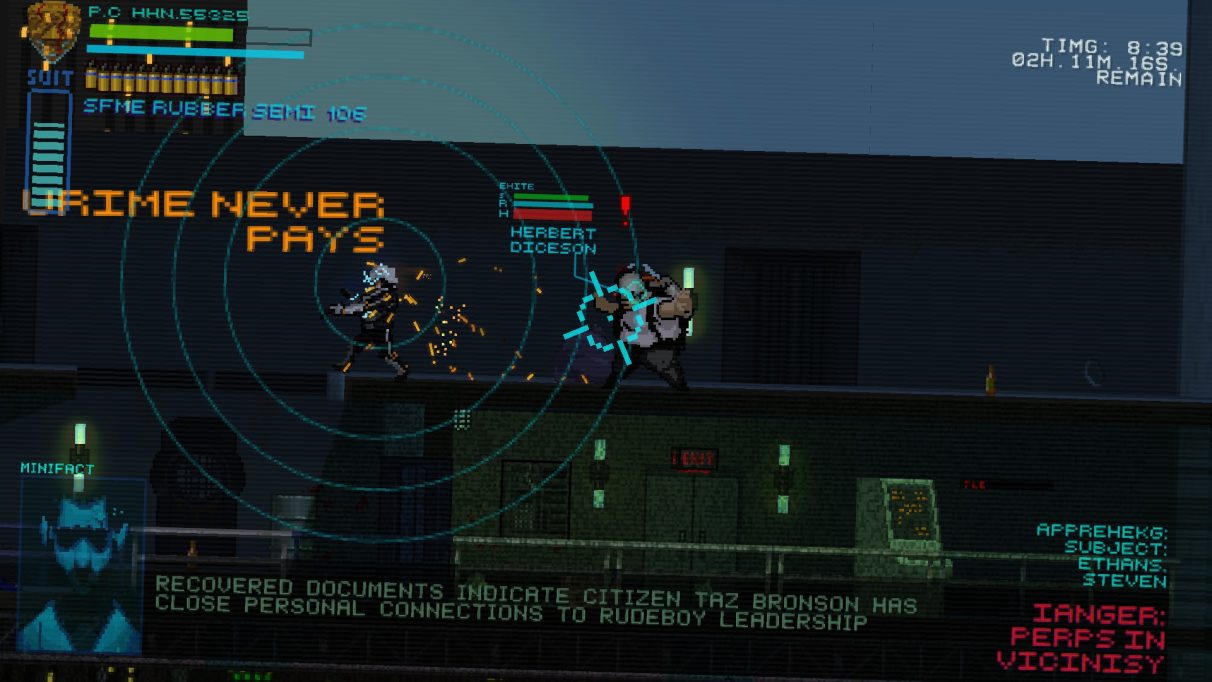 I do enjoy Minilaw. I find its mistakes frustrating precisely because it's otherwise a tonne of fun to play. It looks gorgeous, the sound and music are first rate, and when it works, gunning attackers down feels great. I light up when I see someone standing foolishly close to a ledge, and prioritise running towards them to line up a kick above far bigger threats, just because hoofing them off is so entertaining. I want to find an excuse to stop here so I can start playing it again, which is a sure sign it's doing the important things right. But I'm resigned to recommending it only after an annoyed sigh, and a disclamatory "well..." about the clunky controls.