Thief: The Dark Project still stands out as one of the most compelling stealth games twenty years after release. Huge levels packed with treasure and secrets, and no radars or sensors to help -- just your senses, intuition, and maybe a badly drawn map.

While later games in the series were a bit ropey, the first two Looking Glass-developed ones are still actively supported by the Through The Looking Glass forum community. Think of it as a metaphorical vault of riches to nab, except the riches are mods and the owner wants you to have them. Here's a choice handful of mods to get you playing Thief Gold and Thief 2: The Metal Age polished up, and padded out with some big new sneaky adventures.


While you could dust off an old CD copy, I'd recommend using a modern re-pack of either game for your base, just for consistency's sake. You can find Thief 1 Gold here on Steam/GOG, and Thief 2 on Steam/GOG - I recommend both. Before you start, you'll want the fan-made all-in-one upgrades, both including the NewDark patch that lifted many of the old barriers modders bumped up against. Grab TFix for the first game and Tafferpatcher for the second. Once you've got those installed, you have everything you need to run fan-made levels and campaigns -- see a short guide to the Fan Mission Selector (FMSel) here.

A little more contentious are the HD Texture mods. Some don't like mucking around with a game's original art direction, but these mods seem to have been adopted by much of the Thief fanbase. Either stance is understandable: Thief's muddy dark corners are integral to how you play the game, but its textures were a bit blurry even by 90s standards, and in a game where you spend much of your time hugging walls, ideally you'd want them to look decent. If you do decide to higher your def, you'll need the Thief 1 HD Mod for the first game and the Thief 2 HD Mod for the second. Both have easy-to-use installers, but do require TFix or Tafferpatcher installed.

As for playing, here's two tips for beginners. First, make sure you've got your 'lean left/right' buttons bound. Peeking your head around corners helps, but you can also lean your ears against closed doors and hear what's going on beyond -- a huge advantage considering that sound is heavily muffled by doors ordinarily. Second, I'd recommend binding the controls for adjusting brightness to the mouse-wheel. Garrett may be master of the shadows, but unless you manually adjust brightness, you can end up blind as a bat, especially on good modern monitors with their darker blacks.

T2X: Shadows Of The Metal Age HD by The Dark Engineering Guild with HD mod by Bentraxx

Although I'm mostly focusing on more recent releases, the enormous fan-made expansion T2X: Shadows Of The Metal Age deserves a shout-out, especially as it got a high-def remastering of its own not too long ago. While you can still get the original version here, the HD version is packed up for easy use in the Thief 2 fan-mission selector. Just download it straight to your mission archives directory and away you go. Being an older mod, the T2X team were limited by how many polygons they could cram on-screen or into a single map, but did amazing things anyway.

There's only one real complaint I can level against T2X, and it's the voice acting. It's not terrible, but it's very much from an era before people just casually picked up Blue Yeti microphones. The actress voicing the new player character, Zaya, doesn't quite nail the tonal range the character really calls for. She's no Garrett, but who is? Beyond that, this feels like the kind of campaign that Looking Glass would have made if they'd done one more set of levels a year after Thief 2. The mod crew nailed it all, right down to imitating Thief 2's style of cutscenes and mission briefings.

The thirteen missions touch on every Thief standard, from haunted ruins (now featuring zombies you can decapitate and disarm, although still not kill outright) to Hammerite temples. You even get to poke around a Mechanist-run train station at one point. There's a bunch of new toys to play with as well, including an elemental gem that switches your magical arrows between two different modes. Confusion arrows are great if you don't mind some chaos, and ice arrows (an alternative to water) let you hold and then safely knock out guards. It's more Thief, with more fun gadgets.

This is one of the more impressive campaigns released in recent years, although several of its ten missions are just collections of in-game cutscenes or short narrative segments. Still, when you're given a chance to explore and start robbing the town blind, you'll have plenty to explore and pick clean. Set in the somewhat less industrial, more up-market district of Dayport, Garrett gets caught up in an old feud between two noble families. There's murder, mystery, black magic, and even a bit of mad science gone awry, including a genuinely unnerving (and potentially lethal) robot maid.

Several of the missions here see you return to the snowy streets of Dayport on different days, with guard positions shuffled and new side-plots set in motion. The architecture here is exceptionally detailed, and there's some nice differentiation between older and newer buildings within the district. Modern electrically lit structures are juxtaposed against older churches and castles, and you can see the towering industrial structures of the City proper in the distance. There's a great sense of place to it all.

Despite starring Garrett (whoever voices him does a good job, all told), this isn't his story, just another mess he gets wrapped up in. It makes for some interestingly varied objectives, though - grave-robbing and dark rituals aren't something Garrett would normally be up for, but there is a very large reward promised for this job. Production values on this one are sky high in general, and it boasts its own HD texture set and a large voice cast. Apparently it was a real labour of love -- over thirteen years of on-and-off work. Great stuff, if you don't mind long cutscenes. 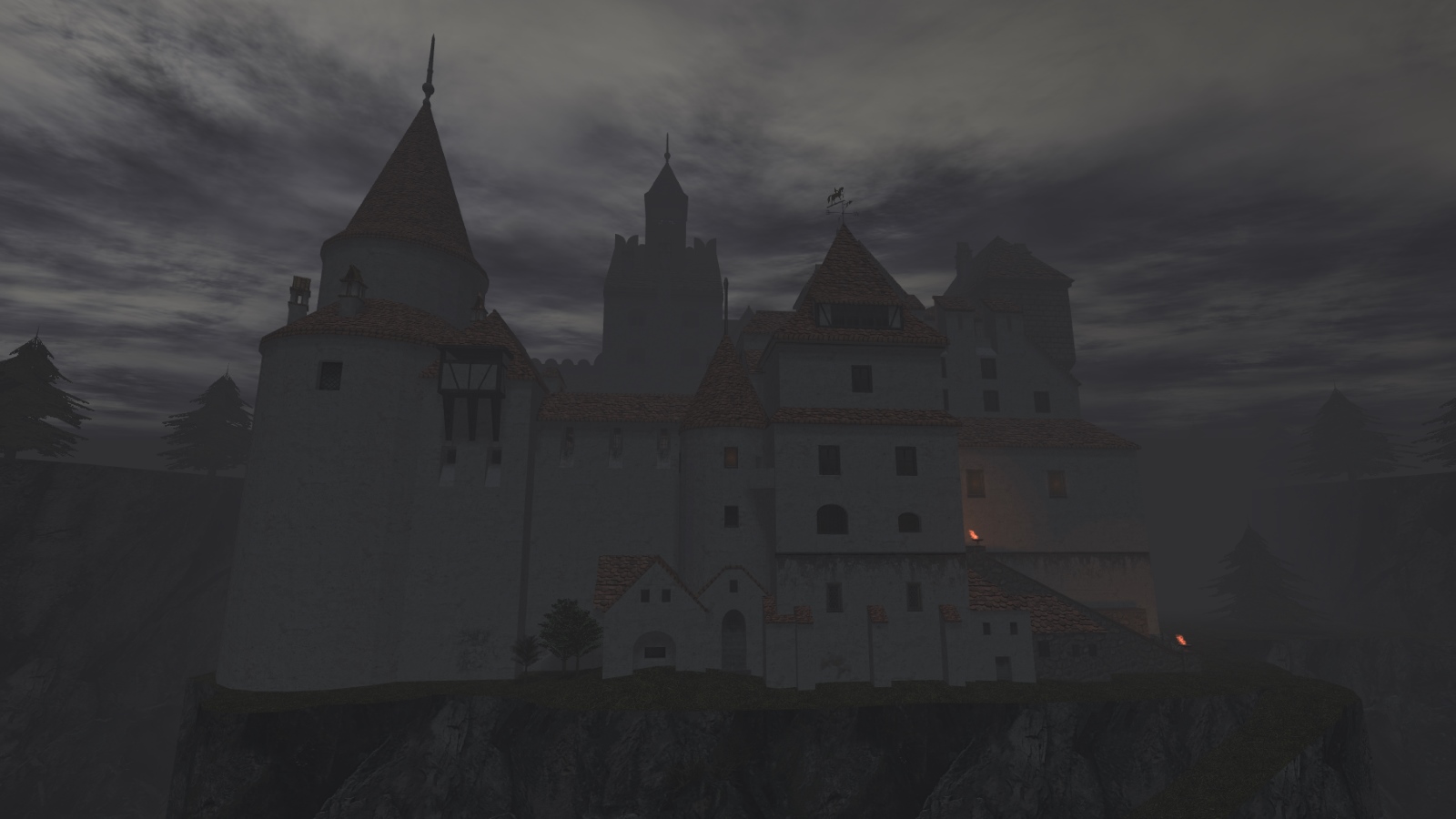 A departure from classic Thief style (and setting) but well worth the trip, this is a mash-up of both Nosferatu and Bram Stoker's Dracula. You're on a mission to infiltrate the vampire's castle and rescue Mina Harker from the count's clutches, but this is less stressful than you'd expect. Aside from an initial infiltration doubling as a tutorial on how to deal with werewolves (plug 'em with a silver arrow) and an escape sequence near the end, there's no sneaking or combat. What you do get is a gigantic medieval castle brimming with secrets and authentic-feeling architecture.

Nosferatu is mostly an exploration and puzzle-based romp, and your main enemy will be just how astoundingly complex the interior of the castle is. It's embarrassingly easy to get lost, and you've got no map to help you, although I doubt any hand-drawn image could help me navigate those halls anyway. Still, you won't regret your time there -- some of the fine detail on this map is stunning, up to and including soot stains on the ceilings above torches. Despite it being a cardinal Thief sin, lighting every candle so you can see the rooms properly is rewarding both aesthetically and ... well, you'll see. 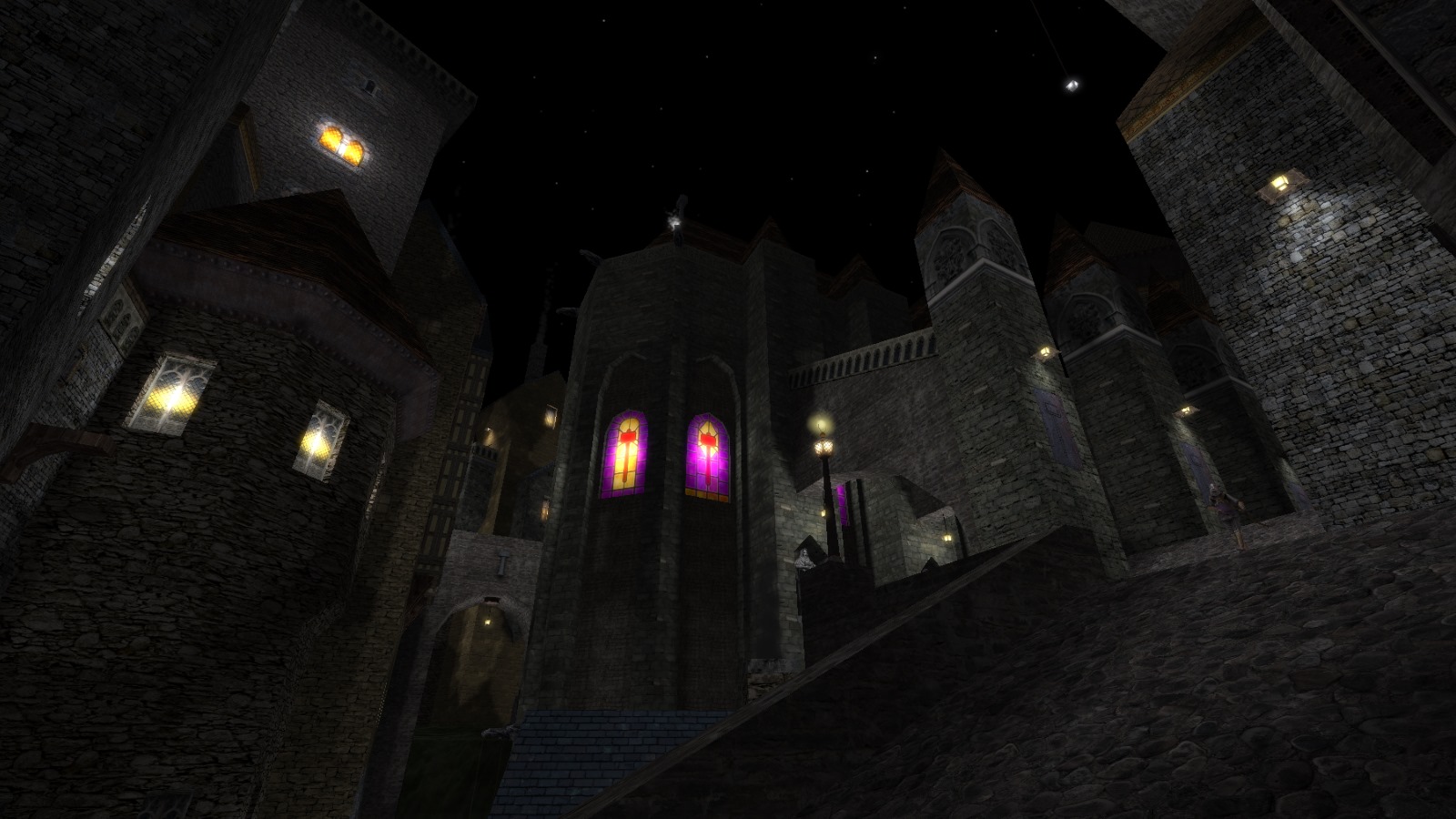 To celebrate Thief's 20th anniversary, the Though The Looking Glass forums ran a contest to create levels for the original game, mirroring Looking Glass's style. Son_of_a_dude may have kept to the letter of the requirements, but not the spirit. It's a fine example of a sub-genre of Thief maps that give you a straightforward enough mission, but a whole city district to explore and loot as you go about it. The relatively simple retro geometry has allowed the creator to go absolutely hog wild -- there are vast swathes of city completely open, but unrelated to the mission.

It's a fun mission, too, accompanied by a decently voiced intro done in classic Thief style. Beneath a noble's manor, they've uncovered some Burrick tunnels, which appear to connect to some old Hammerite catacombs. There's an ancient relic down there to be stolen, so Garrett is off for a fun night out. It's easy to sink hours into exploring this mission, which contains a bunch of optional side-stories to follow, a lot of books and notes to read and characters going about their nightly rounds. It's old-school Thief, but a whole lot of it, and as non-linear as it gets.

If this got you excited for more retro-styled missions, check out the other entries in the 20th anniversary mapping competition. Or, if you're looking for more grandiose city-scaled larceny, take a look at... 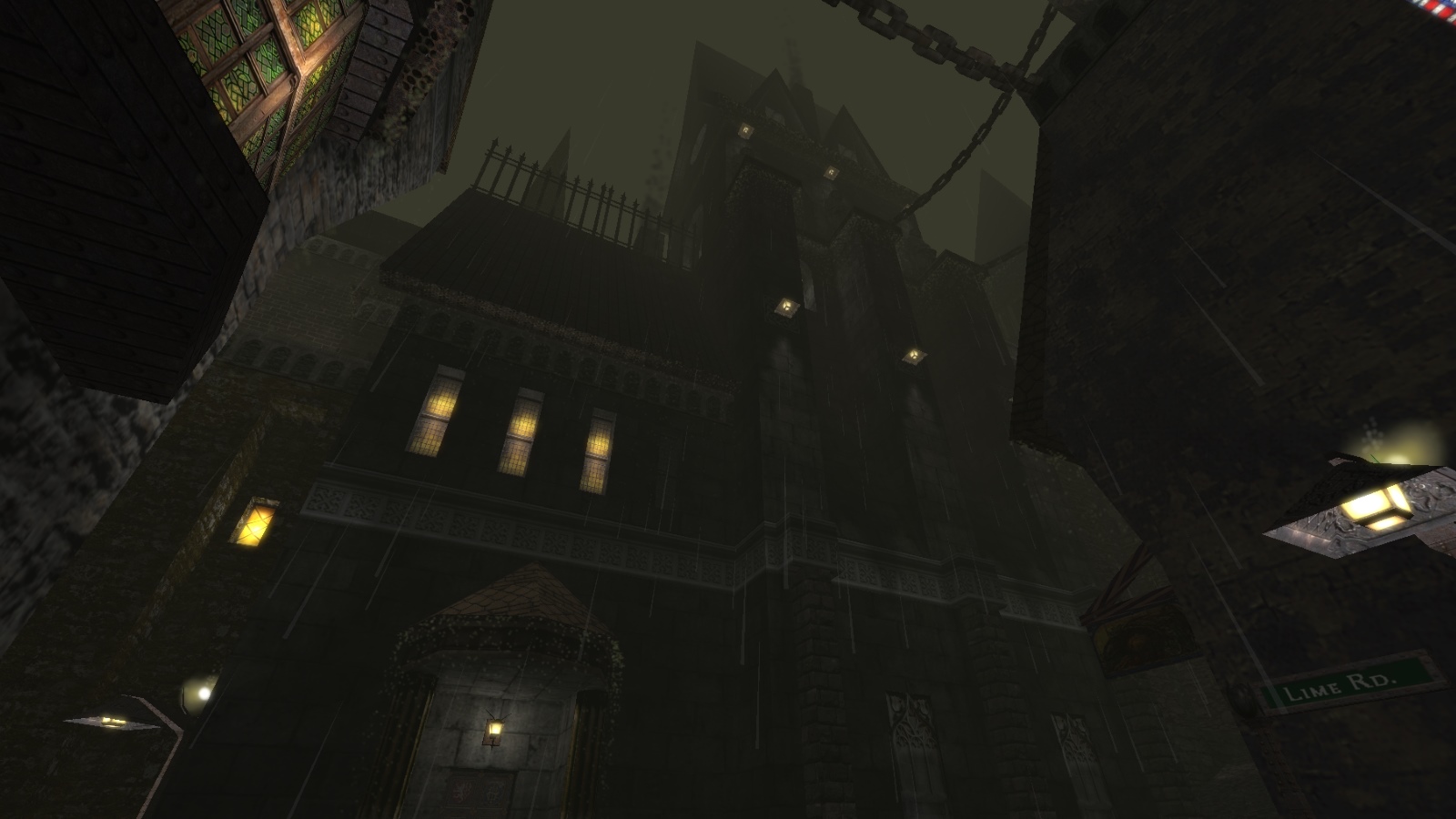 The only complaints I can level at Endless Rain are tangentially technical. First, a bug prevented me from using OpenAL audio mode on this map. The sound of the rain was loud and stuttery until I switched to the old audio system. Secondly, it only uses Thief's vanilla textures, which look a little smudgy and grey, especially when stacked up against this map's astounding detailing. Pure gothic excess, right down to properly functioning gargoyles draining rainwater away from buildings. It's a great example of what the NewDark patch enabled -- this would just crash the original version of the game.

Similar to The Sound Of A Burrick In A Room, this is another sprawling city district to explore, with much of it being optional. What sets this mission apart, aside from its obviously detailed buildings, is the verticality of it all. Rope arrows are absolutely essential here. You'll be scaling the rooftops, and crossing from street to street by tightrope walking across those massive metal chains. The building interiors are almost as detailed as Nosferatu, but you'll be getting a lot more sneaking done here. There are guards aplenty in this district.

Endless Rain is also a sequel to Between These Dark Walls, although either mission stands fine by itself. Skacky's talents aren't just limited to Thief mapping. He also did a bunch of levels for the original Quake, and now 3D Realms have hired him as a level designer on their next mystery game, which I can't wait to see more of.

This is just the tip of a very big, sneaky iceberg, but these picks should give you a couple of weeks worth of larceny to binge on, with the standalone levels each devouring a whole evening for me. If you've gorged yourself on ill-gotten loot and are still hungry for other people's possessions, this enormous list on the Through The Looking Glass forums is your next stop. Hundreds of levels for Thief 1, 2 and even 3, plus standalone fan-game The Dark Mod are just waiting to be taken -- it's a steal. And as always, share your favourites below. I'm always on the prowl for gems.