If you click on a link and make a purchase we may receive a small commission. Read our editorial policy.
Monster Train review
An impressive roguelike deckbuilder with the potential to consume you.

Two weeks ago, Monster Train breezed into my life like a man wearing a trenchcoat stuffed with cocaine. I've been playing Shiny Shoe's roguelike deckbuilder almost every night since, and I have no intention of stopping.

I can't believe I'm about to say this, but it's at least as good as Slay The Spire.

I adore the Spire to the point of self-destruction, and have played it for many hundreds of hours. It's a masterclass in elegant design; an unfolding lotus of weighty decisions and wild card combos. But Monster Train was watching, and Monster Train was learning. Its engine burns with an unholy fusion of the Spire's best ideas and its own, and now it's steaming off into the history books. Toot fucking toot.

Your goal is to guide a train into the centre of hell, and retake it from some pesky angels. This is all background stuff, but I do appreciate the little speech bubbles where the (often equally monstrous) agents of heaven express how sad they are about trying to murder you. It's a neat framing, but that's all it is, and that's all it needs to be.

You're up against a series of fights, with opportunities to improve your deck in-between. So far so Spire, but those fights play out very differently. Enemy minions stumble in at the bottom of your train, then attempt to claw their way to the fourth and final level, where they'll do some damage to your engine before being obliterated by it. You've got to stop them by placing defenders and playing spells, attempting to knock their lights out before they can punch out yours. 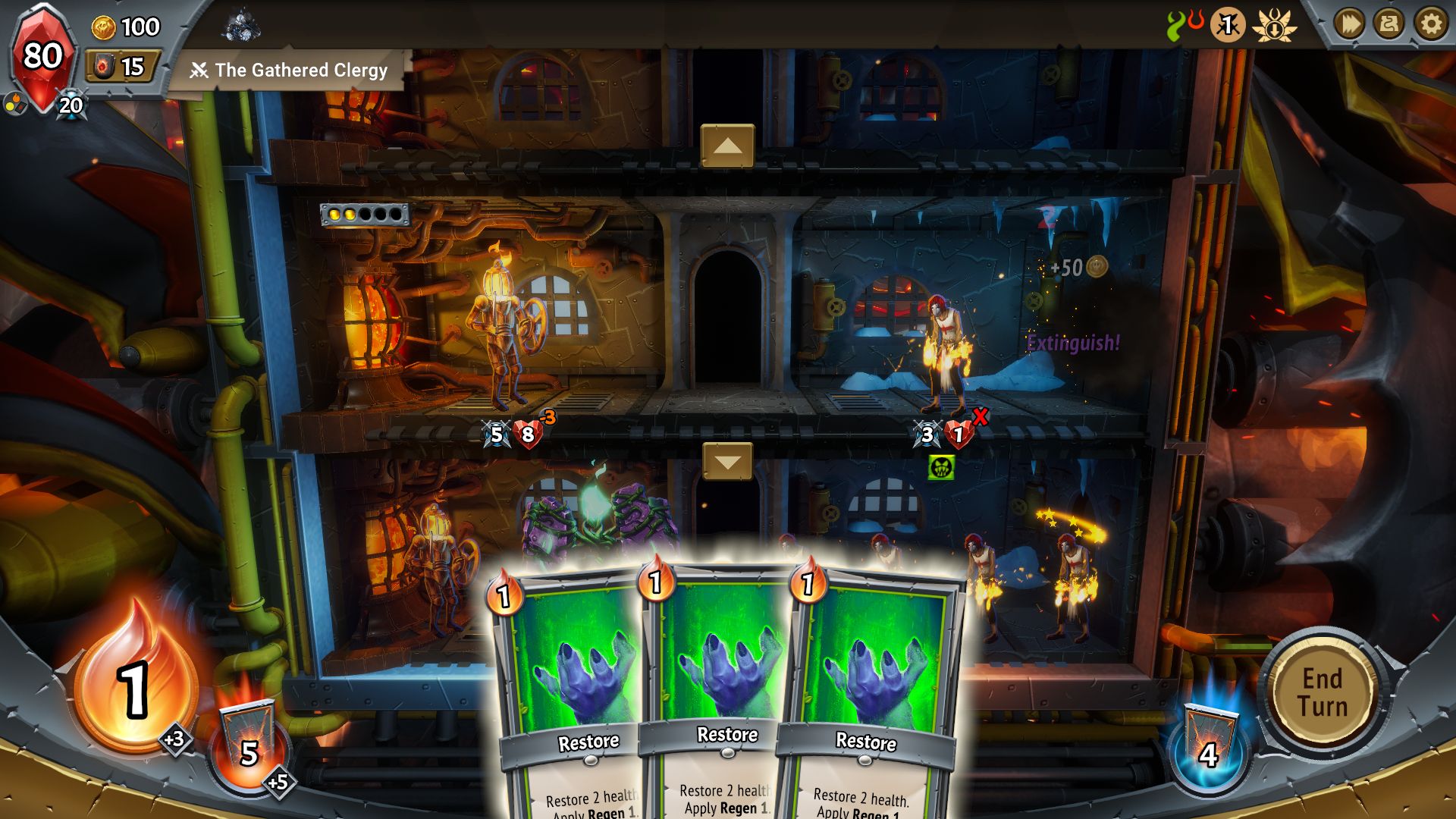 That twists your thinking into novel dimensions. You've got to constantly asses your priorities, and figure out where to spend your resources. It's often, but not always, best to sit back and let your engine take a licking, and instead devote your defences to the baddies (goodies?) further down. Sometimes you'll hang one of your defenders out to dry, and busy yourself elsewhere. Sometimes you'll do that, then curse yourself five turns later when you realise they were the linchpin to your entire strategy.

In so many ways, Monster Train rewards thinking ahead. You don't tend to get far without a plan: you'll want to visualise your armies, to plop that multi-striking demon behind that plant-based beefcake with purpose.

These are rock-strong foundations, but it gets cleverer. Every fight ends with a boss, who'll keep pummelling your units until someone's remains are splattered all over the carriage floor. That turns every encounter into a balancing act, where you need heavy damage to take down the initial waves, and survivability to handle the last. It gives every fight an arc, in the form of a looming threat that you build up towards defeating. You get a dose of 'last stand' drama every five minutes. 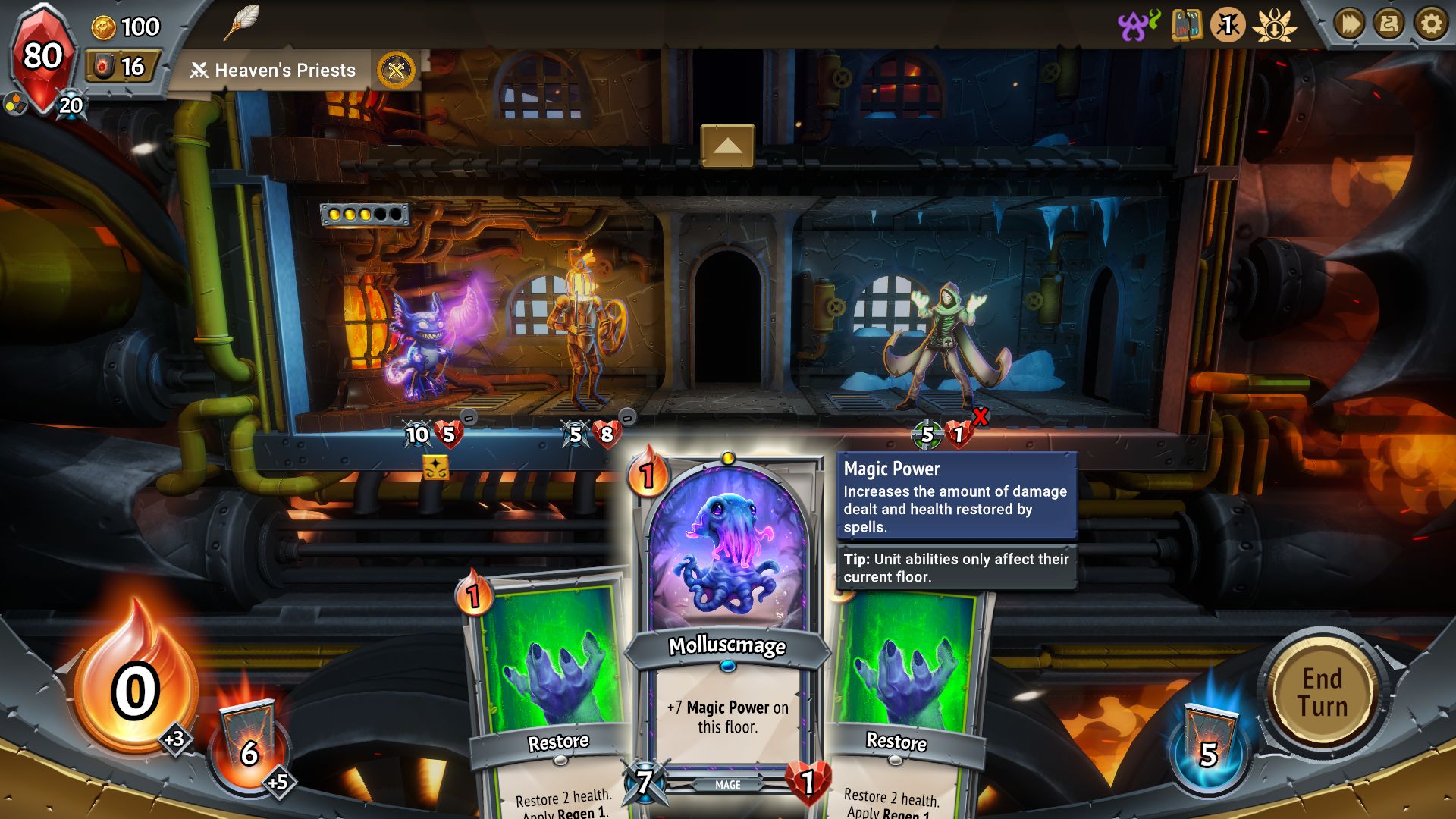 That's delicious, but the Train doesn't stop there, baby. We're just getting rolling. At every possible juncture, Shiny Shoe have slathered those foundations with juicy ideas. Like the Spire, it embraces 'overpowered' combos - and then goes even further. That's best seen with the upgrade system, which lets you plug up to two upgrades into each card. Just by themselves, some of these are ridiculous: that multi-strike upgrade springs to mind, seen as you can slap it on any unit that applies a status effect to have that trigger twice.

But then you'll find special forges where you get to clone a card in your deck, upgrades and all, and wind up building everything else around your two (or three) superheroes. Those can stack dramatically with artefacts, which work exactly like the Spire's Relics, in that they provide game-changing passive buffs. In one game I found an artefact that pushed my unit upgrade slots up to three, and stormed my way to the finish line with super-tough, super-damaging Alpha Fiends that got more powerful with every strike. 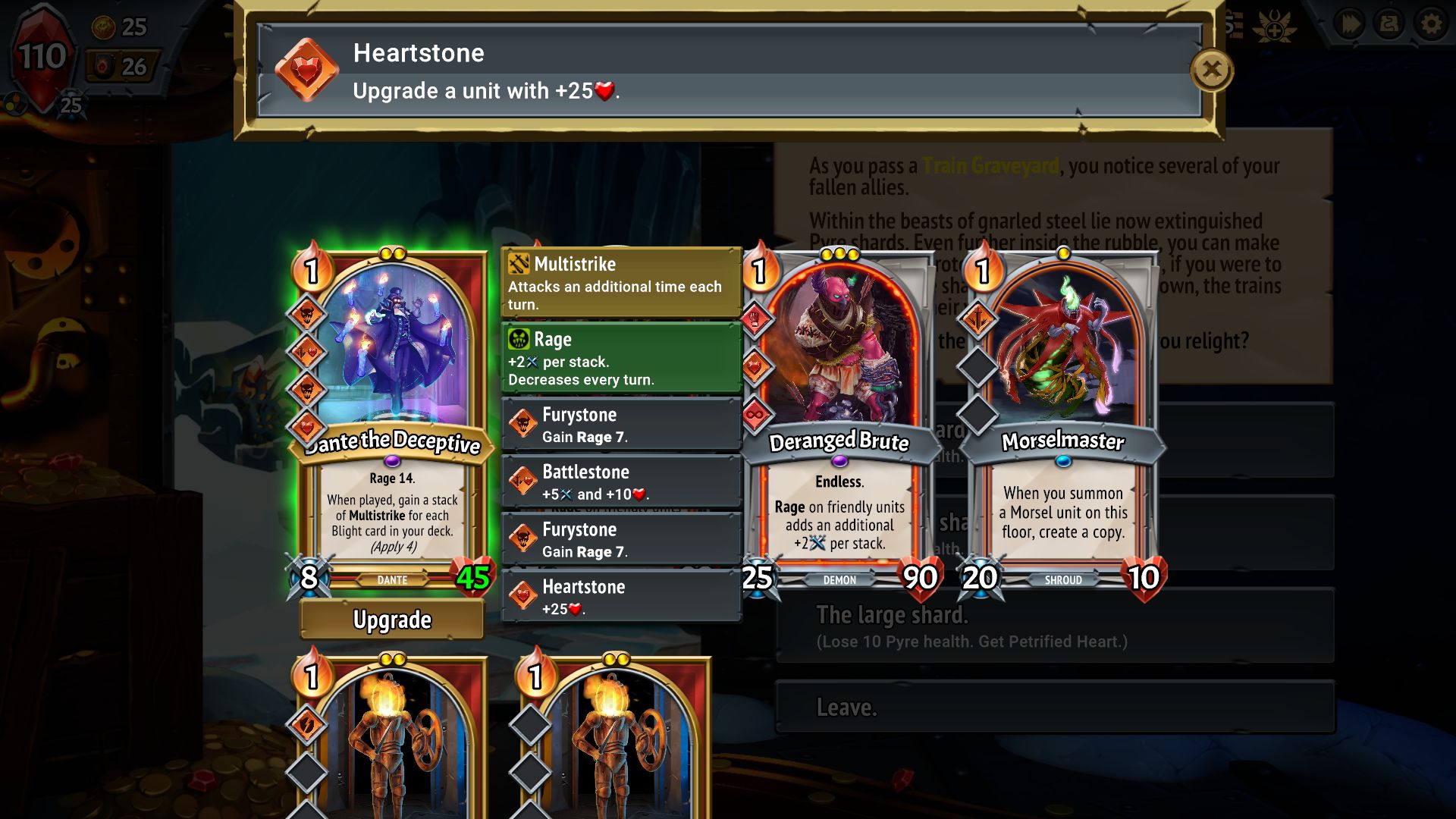 In my last run, I made a deal with a shady man I met in-between fights. I agreed to hold onto three curse cards until he appeared later on, and sure enough, a few battles later he joined me. At first he did a low damage whack for every curse card in my deck, but then I upgraded him - three times, thanks to that artefact, then a fourth time thanks to a special event. Then I cloned him. Then I cloned him again. Then I started paring him up with my copies of a second unit that doubled the effectiveness of the "rage" buff I'd upgraded him with (also twice), resulting in an absurd amount of damage that I'd be tempted to call broken if I hadn't very nearly lost.

Crucially, that was totally my fault. Monster Train tells you exactly what the random final boss does (again, building on a lesson learned from the Spire), and if I'd checked I'd have known not to build around stacking buffs that that this particular boss halved every turn. By the time I got to that final confrontation, all my rage juice was gone. It was ridiculously tense, and I won by the closest possible margin.

Here is that happening to me in real time, because why not. (It's eerily silent because I normally have music playing, and you should skip it if you want to avoid mechanical spoilers for the fourth unlockable faction. And yes, I have also made one of those units immortal, because that is also a thing you can do.)

Oh God, factions! How have I not yet mentioned factions! You start each run by picking two out of the five, which determine your special starting champion unit and which cards you'll see throughout the run. There are three different (upgradable) versions of each champion, and they usually form a cornerstone of your strategy - alongside whichever random cards you drew in addition to the faction-specific starter ones. You wind up with a dizzying array of starting possibilities, and runs that feel distinct right from the off. That's a damn clever trick.

If I raved about every clever thing the Train does we'd be here all day, so I'll wrap up with a nod towards how it handles progression outside of runs. It's really well thought through, with unlockable cards and entire strategies that have had me literally squealing at possibilities. All your unlocks are presented in this lovely sticker book, too, which among other things shows you which faction combos you've won with. Right now, at least, it's hard for me to imagine giving up before I've filled in every last one. 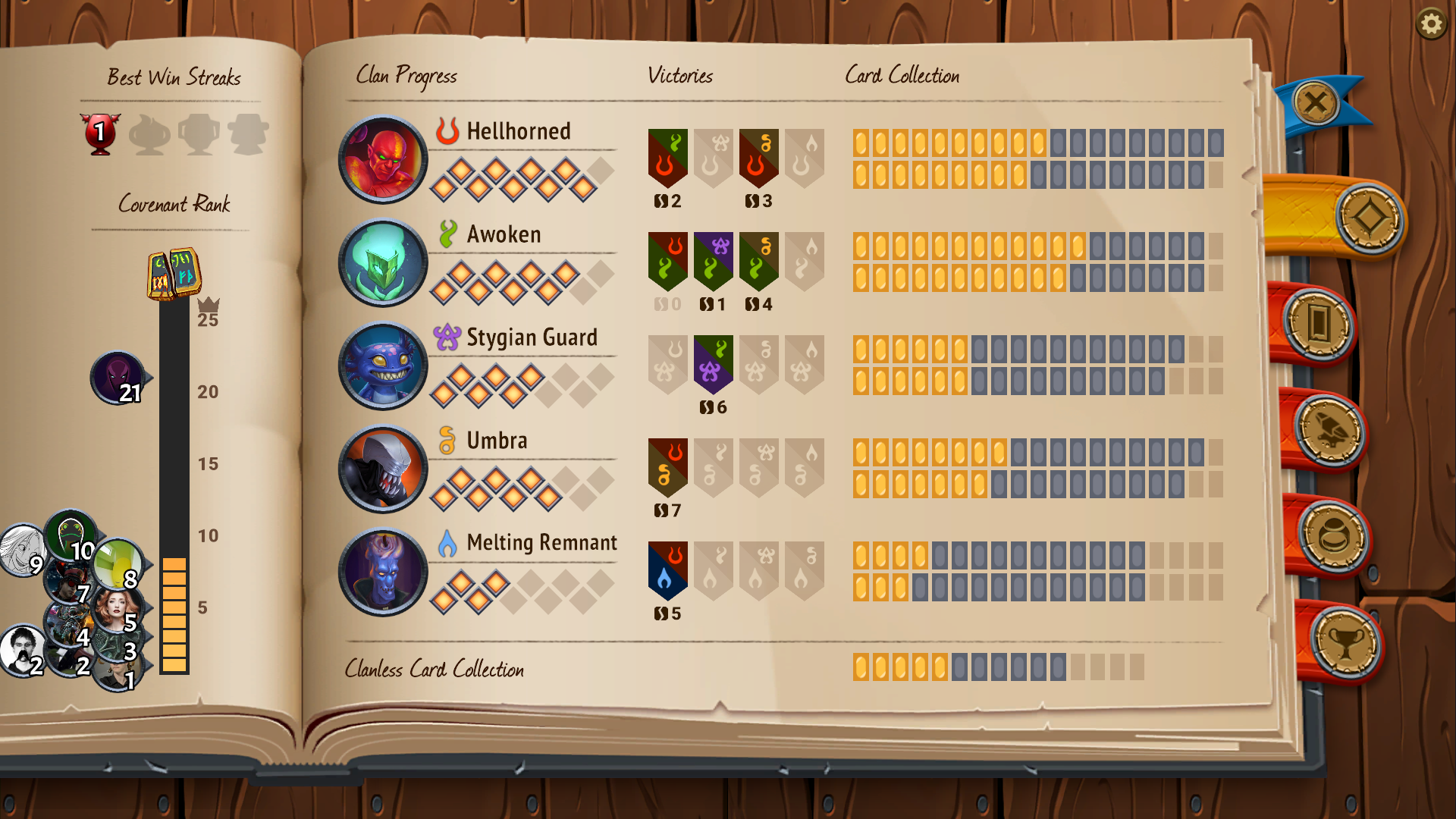 The train also puts the Spire's "Ascension Ranks" front and centre. Beating the game once is only the beginning: each time you win, you get the chance to make the game a little bit harder in some specific way, like slightly buffing enemies or diluting your deck with more starting cards. Pleasingly, you also get to see which rank all your friends have reached at the side. I am very much enjoying keeping Brendy (RPS in peace) one rung below me at all times.

It's absurd that Monster Train does so much more than I've mentioned. You're constantly asked to bet on yourself, gauging whether you can handle a tougher encounter for bigger rewards. Those artefacts can dramatically change the direction of a run, and every boss has variables that keep fights fresh. Between all that and the myriad possibilities presented by faction matching, I'm comfortable with saying that it's more varied than the Spire. 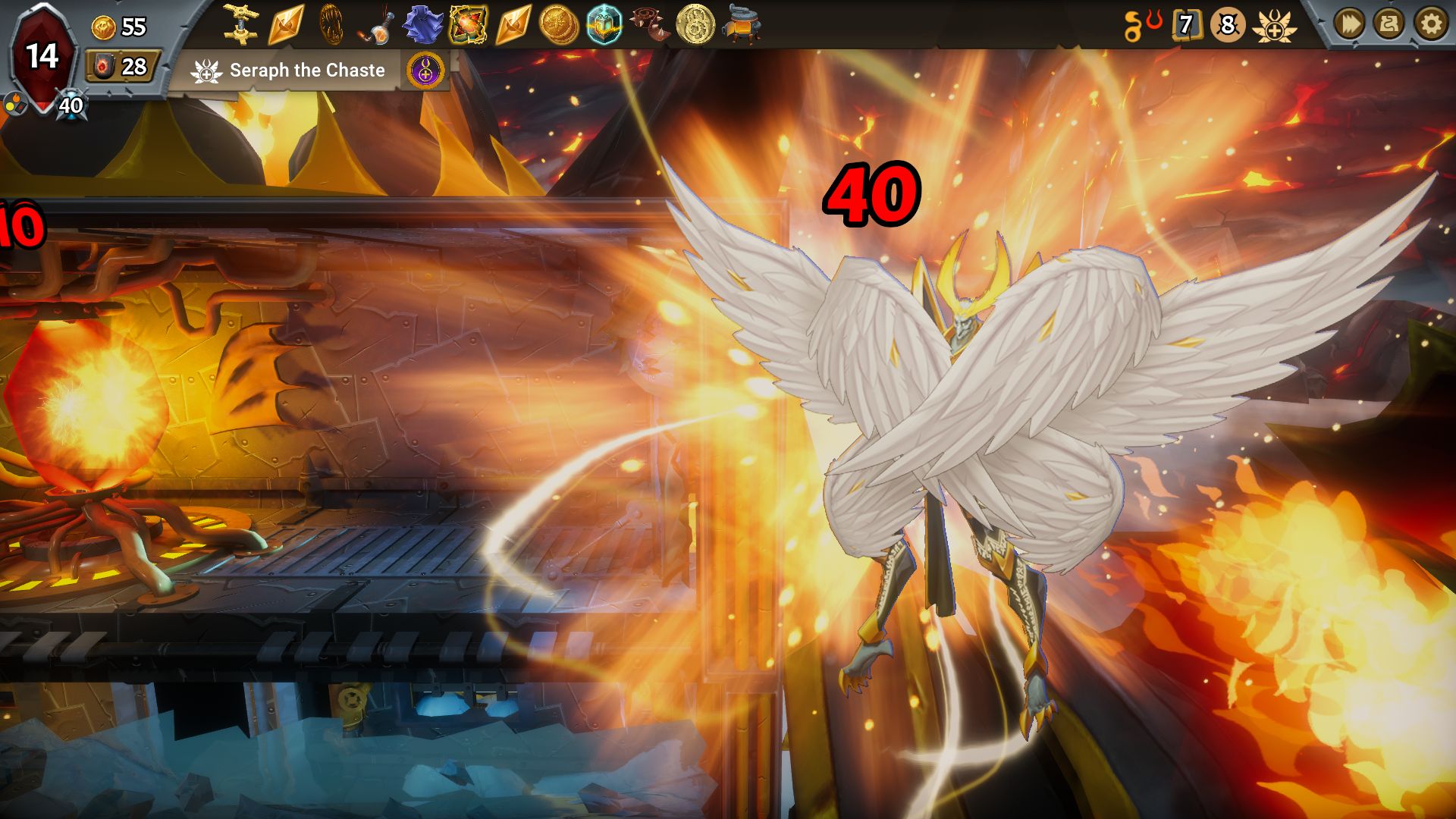 I'm not comfortable saying it's outright better. Not yet, at least, but I will say this: before Monster Train came along I couldn't see myself ever obsessing over a deckbuilder in the same way that I did with the Spire. It seemed too immaculate to meaningfully improve on, but there are plenty of specific ways in which the Train does exactly that. Before the Spire, my life had never contained a singleplayer game so good that I got frustrated at myself for playing it over and over again rather than checking out something new. I assumed that was a weird blip, an unrepeatable anomaly - but I'm pretty damn sure that's going to wind up happening with Monster Train, too.

I haven't even got round to properly trying the multiplayer mode, where you start a run with the same seed as your opponents and have to make decisions under time pressure. That may or may not be my bag, as I do like a good mull - but it's exciting nonetheless.

Christ. What a thing. Monster Train is at least as good as Slay The Spire.

You really should try it.