If you click on a link and make a purchase we may receive a small commission. Read our editorial policy.
Developer: Krillbite Studios
Publisher: Raw Fury
Release: Late 2018
On: Windows, Mac OS X and Linux
From: Steam
For: TBC

There’s something about Mosaic. Maybe it‘s the dark colour palette, the poignant use of lighting or the low poly aesthetic of Krillbite Studio’s second game, but I’m transfixed.

Krillbite’s first title, exploration horror Among the Sleep, was an unexpectedly big success, a… sleeper hit, if you will. Mosaic is supposed to be a departure in every way, but it retains a gloomy atmosphere that makes me think the Krillbite team could use a bit more sun and fresh air. CEO Jon Cato Lorentzen gives me an embarrassed grin when I bring it up.

“Yeah, I won’t lie, Mosaic comes from a place of exhaustion, even depression,” he says. “Where Among the Sleep was a toddler’s nightmare, Mosaic uses an adult’s perspective. The idea for the game took root during the final days of development on Among the Sleep, too. You’re tired but you also want to deliver the best game possible, so some of us sat there during crunch and started to fantasise about just not going to work.”

Since then, schedules have changed and every effort has been made to ensure a healthy working environment, but the idea for Mosaic was born. 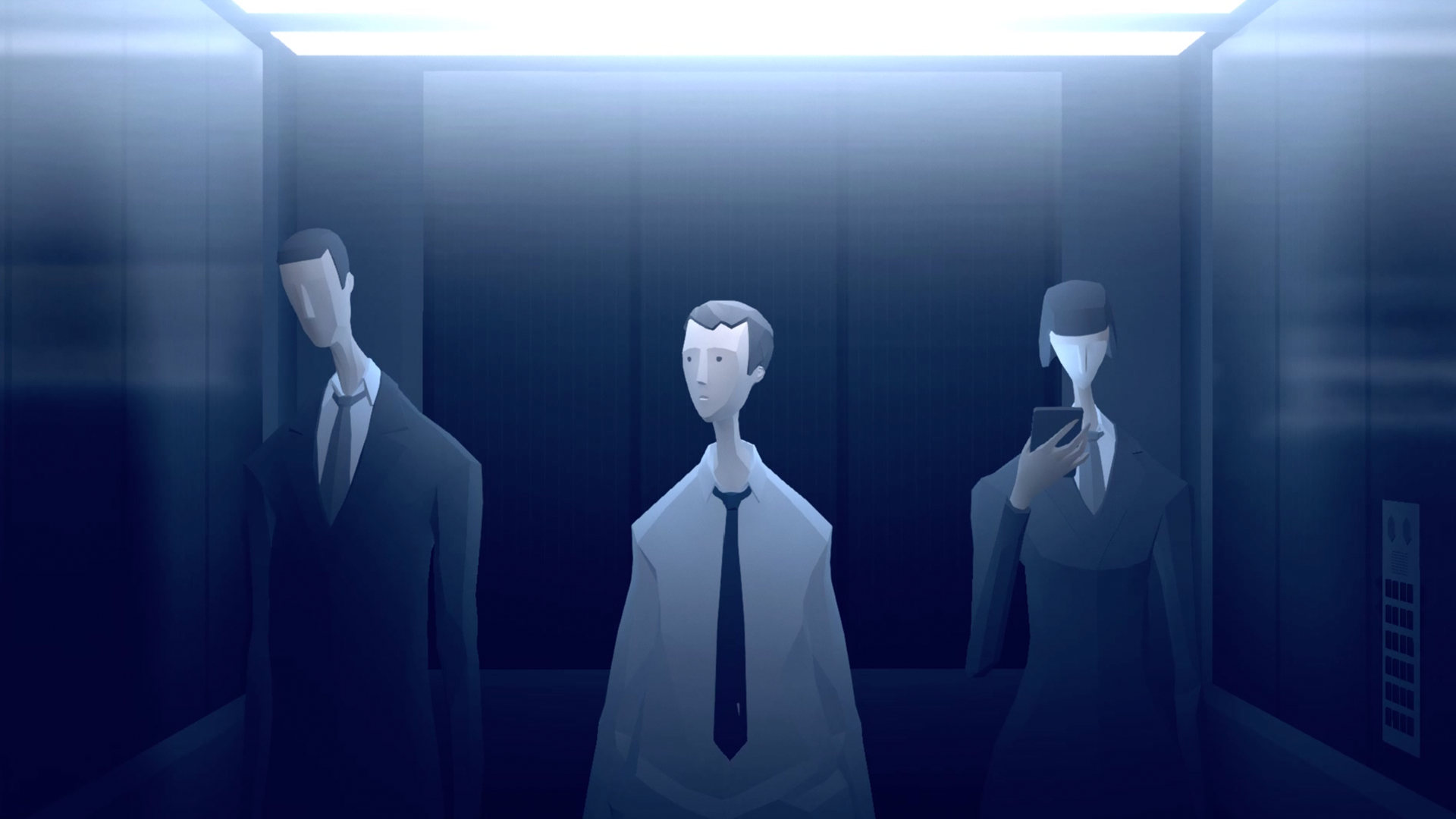 Its general setup is relatable not just to people struggling with a deadbeat job, but all those who seek to reconnect with their environment. You take control of a man on his way to work. With his generic haircut, shirt and tie he looks just like all the other people working for the same megacorporation. Everyone takes the same route, uses the same means of transport, and stares at the glowing screen of their phone in silence. It’s a familiar image wherever you are in the world, London or Tokyo, but here, sapped of all colour apart from dark blue hues and greys, with the rain beating down on the street, it’s eerie, similar to Playdead’s 2016 platformer Inside.

But you can decide to deviate from the beaten path. When everyone goes right, we boldly decide to go left, delaying the inevitable for a bit longer. The further we walk from the city, the lighter everything becomes. The rain stops and the sun peeks through the clouds, showing us a bit of greenery in the distance. In a backyard we encounter a little cat, a ginger ball of happiness we even get to pet. I breathe a sigh of happiness.

What I get to see of Mosaic is all about small distractions, both good and bad. There’s a mobile game on your character’s phone, which is literally just a clicker. You press the same button over and over again, just to see the clicker move. You can also mindlessly dump some of your money into in-game transactions. It’s an obvious but effective dig, especially since there’s nothing else to do once we resume our trip to work.

“People get distracted very easily these days, and that’s now something that gets used against us,” Lorentzen says, partly to explain the presence of the mobile, game, but also to hint at Mosaic’s bigger narrative. There’re more unsettling things at the core of this game than just the zombie-like shuffle of every person you meet. If you keep your eyes open, you learn more and more about the company you work for, and its vested interest in keeping the population subdued. The topics of mindfulness and surrealism seem like a lot to stuff into a game of a few hours at most, and a good balance between the two will be key.

Additionally, in making a game completely devoid of dialogue, Krillbite is working off the strength of Mosaic’s visuals alone. According to Lorentzen, this also allows players to make up their own mind about what they’re seeing. “We want you to explore as much of the world as possible, as there are interactions you can miss. What you witness influences both the outcome and your understanding of the story,” he says. “Of course we’ll lead you to parts vital to the plot, but there’s more of an impact to discovering things for yourself.” 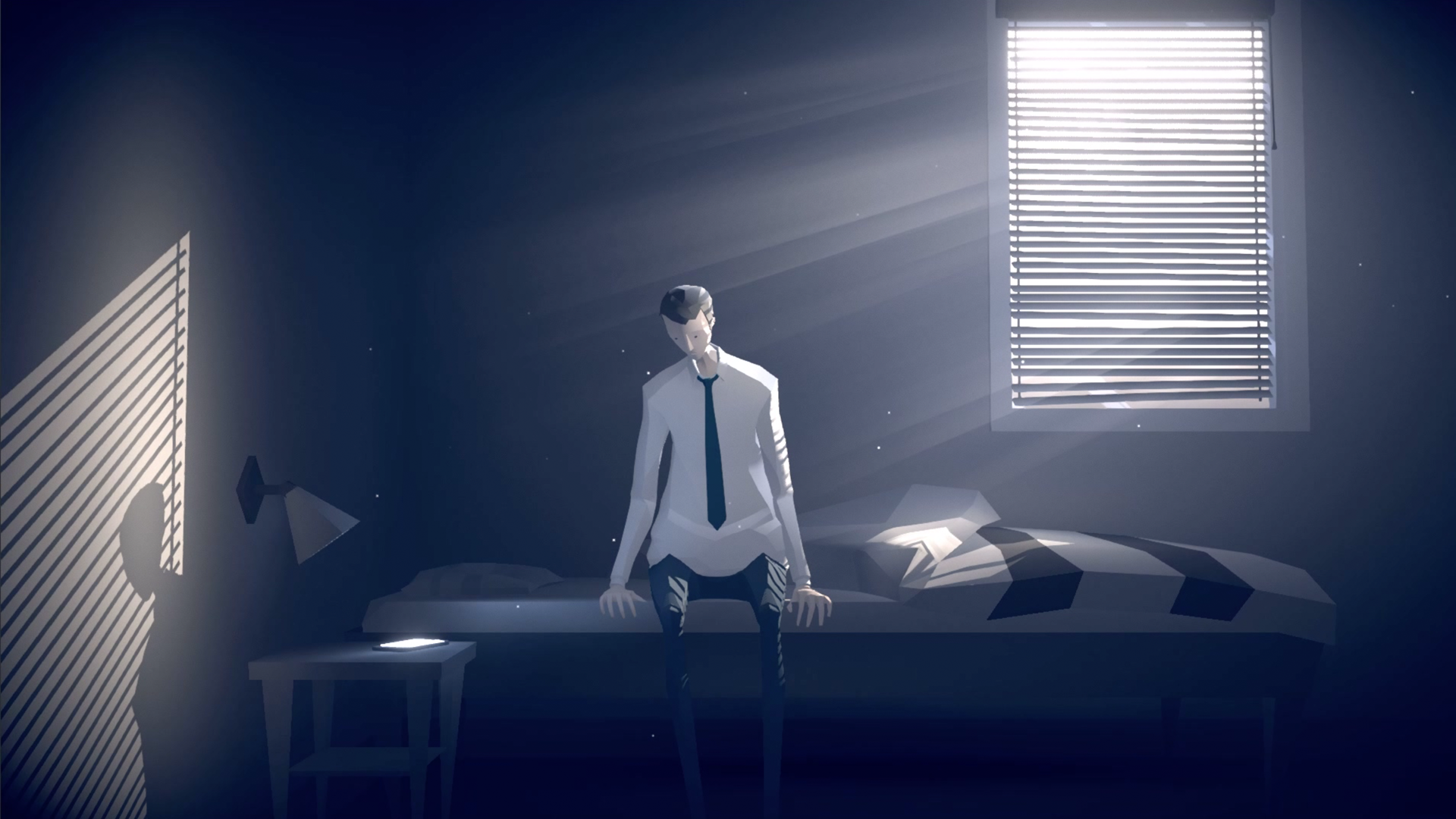 As we walk on, we get distracted by a colourful butterfly. Suddenly, we take control of the insect, while the man watches on in the background. We lead it through something of a small obstacle course, before it meets it’s untimely end. In the finished game, there are going to be more instances of seeing the world from a different perspective.

I’m astounded by how close I already feel to this nameless man on his way to work, and how fiercely I hope for his journey to be successful, just because Mosaic has already given me a small glimpse of the sun. I ask Lorentzen if Mosaic represents Krillbite’s own way back to satisfaction and health. He smiles again, wistfully this time.

“It’s not a happy game.” At my look of utter defeat, he shakes his head for emphasis. “It’s just like real life. You need to find your happiness where you can.”