The real difference, though, lies in how the devs have fully embraced the joys of NPCamoflauge: the three rounds I've played were much closer to the main multiplayer mode from old Assassin's Creed games than they were to previous versions of The Ship. Turns out that was exactly the right direction to head in.

Blending in as an AI was always a part of The Ship, but in Murderous Pursuits it’s central to success. A bar at the top shows you when you’re near your target, but you’re not told what they look like. Even once you’ve spotted them, if your quarry manages to slip out of sight they can stand near an identical NPC - leaving you flummoxed while your own hunter catches up with you.

I love how that builds into the pacing of each match. A round will mostly be spent sedately skulking around the map, planning your movements carefully to both evade your hunter and get closer to your target. Every so often though, that calm gets punctured by a flurry of assassinations as each player reveals themselves and gets murdered in turn. It’s gloriously silly stuff. 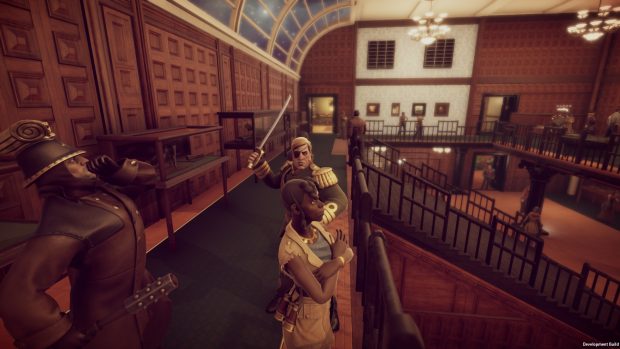 Each player picks two abilities at the start of each round, and while I feared they would detract from the mind games they actually add to them. The big problem with Assassin's Creed multiplayer was that you could wind up investing loads of time and effort into setting up a kill, only to have your target drop a smoke bomb and undo all your hard work. While Murderous Pursuits has similar abilities, they're on stricter cooldowns and aren't game-breakingly powerful.

One skill that I was particularly alarmed to see, for example, was the counter ability: if you activate it at the right time, then instead of being killed you'll stun your attacker. It only makes you invulnerable for a few seconds though, and once your hunter knows that you have it they can try to trick you into activating it early. Except once you know that your hunter knows that you have it, you know that's exactly the sort of stunt they might pull... It's a mind game within a mind game, which is one of my favourite ways to get my multiplayer kicks.

This is what I've always wanted Assassin's Creed multiplayer to be, with an emphasis on thoughtful plays and smart psychological trickery. It's out next month, and I can hardly wait.