I am completely and totally in love with platformer Necrosphere [official site]. I have also shouted at it so much that I now genuinely have a sore throat. I cannot remember a time when I've improved so, so much at a game in a relatively short space of time, to the point where completing certain sections has had me begin to imagine statues built in my honour. And then I come crashing down to Earth as I struggle with the very next moment. It's a complete joy, a full 2D Metroidvania, and yet the whole game is controlled with only two buttons.

To look at the screenshots, you could be entirely forgiven for seeing yet another pixelly 2D platformer, and wondering why we'd even mention it. While I really like Necrosphere's chunky pixels and minimalist palette, I also recognise it doesn't surprise. However, that can't be said for the rest of this utterly splendid game. A game that shows just two buttons is enough to offer an incredibly deep and complicated experience.

There's a story to all this. You play a guy who has found himself in the Necrosphere, a sort of post-death underworld in which further death is impossible. However, there are also notes left about the place seemingly somehow transported in by people still alive, who also pushed through a bunch of particularly useful bouncy bubbles - especially fortunate as at the outset your character can't even jump. Just move left and right. It's with these two buttons (A and D, or the arrow keys) that you must attempt to explore and eventually escape back to life itself.

So indeed you begin only able to run to the left or the right. And at first, this feels - you'll not be surprised to learn - astoundingly limiting. It is to the game's credit that it's bold enough to hold off for a surprisingly long time before it gives you your first new ability - a dash by double-tapping a direction button. It very smartly ensures you grow used to the limitations for long enough to start instinctively using the environment to propel yourself about in imaginative and effective ways. 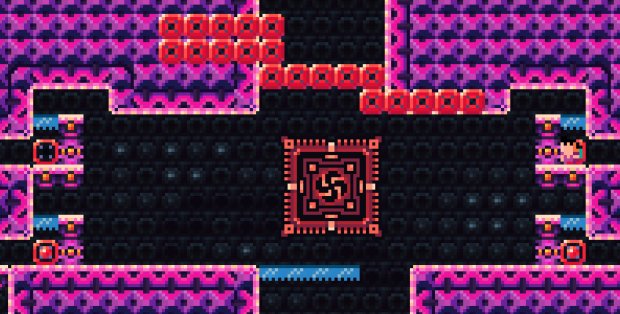 In other words, it forces you to get good at the fundamentals before it embellishes with more abilities. Because this isn't a game that gets easier as you are able to, say, dash across gaps - this is a game that is going to demand more and more and more of you as you're able to reach later stages, until you are performing moves of such ridiculous complexity and deft perfect timing, and start to feel like you're the bloody best there is.

I imagine words like "ridiculous complexity and deft perfect timing" are offputting to many. They'd be offputting to me, if I were reading this without having played. So let me implore you to believe that you - yes you - are capable of playing this. Because I am, and I'm a platforming klutz.

One of the big reasons for this is the immediacy of the checkpoints. Both in distance and time. Failure means respawning within the same half second usually a few steps away from where you failed. Getting past an obstacle becomes a trial you can take a million times in a row without feeling punished for failure. It becomes about learning and perfecting, and in the moment of successful execution there's such elation.

I'd directly contrast that to other platform games' approach to boss fights, where a lengthy and multi-staged sequence has to be restarted multiple times until finally, perhaps by luck as much as skill, you finally get past it, and the feeling of success can be drowned by resentment and tedium. Here each and every new challenge is so quick, and so instantly retried, that you'll struggle to bear ill will even at its trickiest moments.

By the end portion of the game, and by God I've reached it, this gets a little more challenging. There are longer sequences that must be negotiated, using all the abilities you've gained for your two buttons, and I'd argue by this point they're entirely fair, or it wouldn't be demanding more of you than it had before. But my goodness, I roared in frustration, most usually at myself. Hence the sore throat. Getting past these, especially the BLOODY FLOATING GREY BLOCKS WITH THE FIREBALLS, was a moment of jubilation.

Then of course, I discover the video of the guy completing the entire game in 15 minutes without making a single mistake, and I realise that my 409 billion deaths over days to do the same are the pitiful attempts of an insect man. (I strongly suggest you not watch that video if you plan to play - it very quickly reveals all the game's surprises.)

I have a couple of gripes. One is with a few sections where death is impossible to avoid. These are invariably falling sequences in which you can't know what obstacles are coming before you hit them. Of course, this plays into the way the whole game is encountered - learning what you need to do by failing at it until you don't - but when it's all off screen before you're dead it feels a little cheap. The other problem that's a bit more significant is there's no clear indication of which routes have yet to be explored, and it's usually only after you've gone too far down one direction to return the quick way before you realise your mistake.

Of course, this does afford the opportunity to realise just how much better you are at this game than you were before, and you quickly negotiate your way through areas that previously had seemed close to impossible. And indeed to collect the bonus items that were beyond your reach with your abilities on previous trips.

The result of all this is just magnificent. A super-tricky game with a wonderfully smooth difficulty curve, and a masterclass in design when managing to offer real depth and challenge despite limiting itself to just two buttons from start to finish. You'll feel amazing when you succeed. Right up until you watch this video of Alexander Zenko playing it, that is.