The Nvidia GeForce GTX 1650 is the latest graphics card in Nvidia's budget-oriented Turing line-up. Aimed at 1080p gamers looking to get 60fps on either Medium to High settings, it's a tempting buy for just £139 / $149. But when the 8GB version of AMD's Radeon RX 570 can be found for practically the same amount of money these days, the battle for which graphics card belongs inside your PC gets a little more complicated. To help you decide, I've put both of them head to head via the medium of some lovely bar charts to see which one's best. Because nothing settles a best graphics card debate like some good, old, lovely graphs.

As per usual, I’ve run each card through my general games benchmarking suite at 1920×1080 and 2560×1440 resolutions to see how they perform across different graphics quality settings. The idea is to see what it takes to get a decent 60fps in each game, and how far each card is able to stretch itself before things get too choppy for comfort.

The games in question are Assassin’s Creed Odyssey, Final Fantasy XV (with Nvidia’s fancy HairWorks, TurfEffects, VXAO and ShadowLibs effects turned off), Monster Hunter: World, Shadow of the Tomb Raider, Total War: Warhammer II, Forza Horizon 4, The Witcher III and Metro Exodus (albeit only on Medium settings because that game's benchmark tool is rough on anything more demanding).

Paired with my Intel Core i5-8600K CPU and 16GB of Corsair Vengeance 2133MHz RAM, I’ve seen what each card can do on Ultra, High and Medium settings at 1080p, and Medium at 1440p (because realistically you're not going to be pushing either card any higher than that), and taken an average frame rate either from their own built-in benchmarks or from my own repeated manual gameplay tests to see how they stack up against each other.

Today, I've got Zotac's GeForce GTX 1650 OC edition and the 8GB PowerColor Radeon RX 570 Red Dragon, both of which are at the lower end of their respective price spectrums. This should give us a pretty good idea of what to expect as a baseline experience from each type of card, and puts both of them on a level playing field - which is important for those looking to make the most of their hard-earned pennies.

Starting with how the GTX 1650 and RX 570 performed on Ultra settings at 1080p, you can see from the graph below that the RX 570 has the upper hand in every game going. Admittedly, neither of these cards are really 'Ultra'-tier GPUs - that's more GTX 1660 / RX 580 kind of territory - but if you're the sort of person who values graphical fidelity over super fast speeds, then the RX 570 is definitely the best card for the job here. 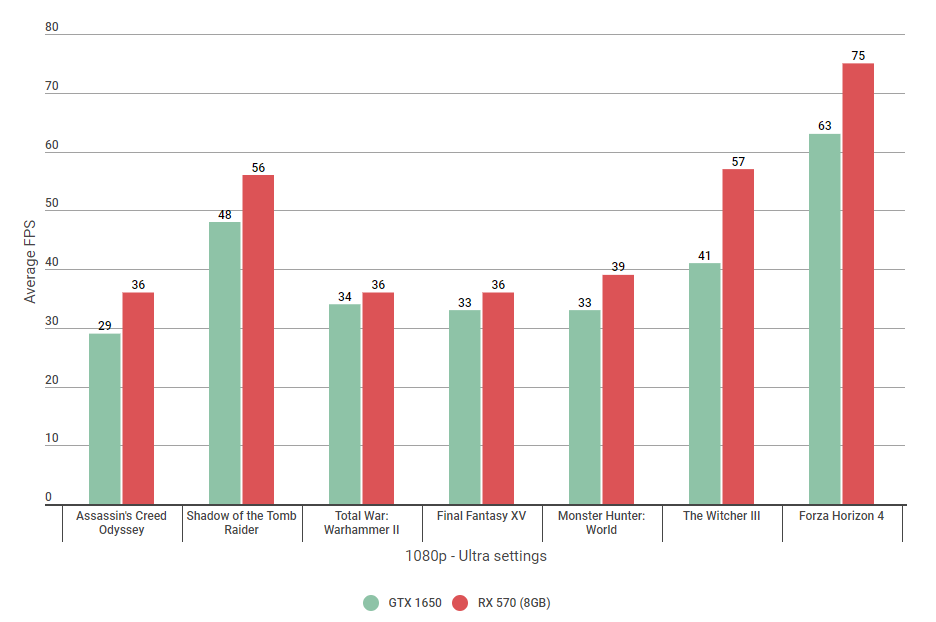 In the GTX 1650's defence, there are still a couple of games where it's more or less neck and neck with the RX 570. In Total War: Warhammer II and Final Fantasy XV, for example, there's an average gap of just 2-3fps - something you're arguably not going to notice in-game.

However, what these graphs don't show you is the highs and lows of each of those games, and in both cases it was the GTX 1650 that dipped below the tell-tale 30fps line rather than the RX 570. Whereas AMD's effort always managed to keep its head about 30fps when the action got a bit heated in these games, the GTX 1650 dropped to a stuttery 28fps. Again, it doesn't sound like much on paper, but in practice it's huge. Every frame counts when you're hovering around the 30fps mark, and just a couple of extra fps here and there can make all the difference between a playable action sequence and a spluttering slideshow.

Still, as I said earlier, Ultra quality isn't really what you're going for with these cards. Instead, you're almost certainly going to be more comfortable on High, the results of which you can see below. I've omitted Forza Horizon 4 from this graph, as both cards already hit a comfortable 60fps over on Ultra, but you can see it's a much tighter race on this particular quality setting, with the GTX 1650 closing the gap in Assassin's Creed Odyssey and offering much more playable speeds in Shadow of the Tomb Raider. 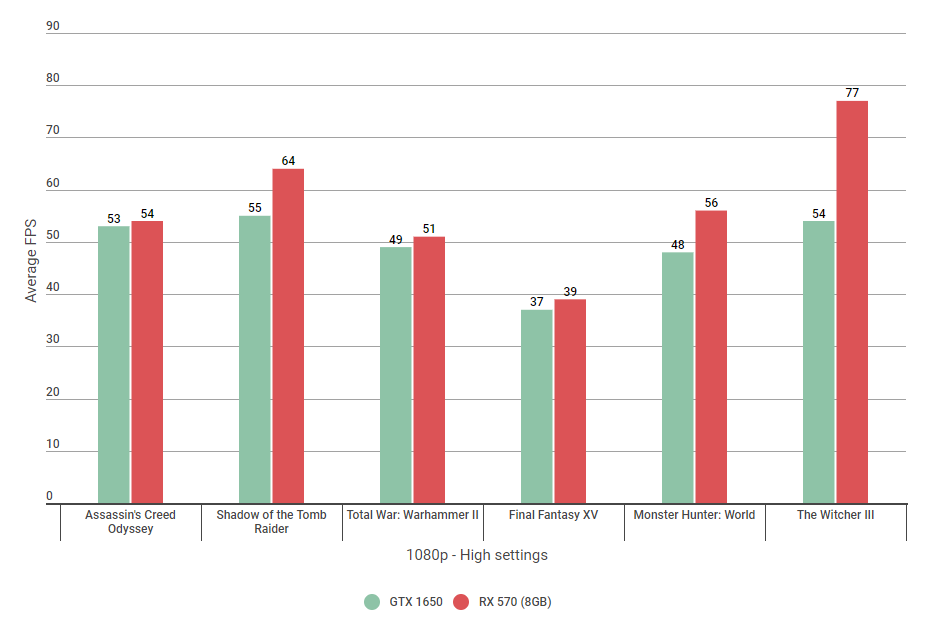 Looking at this graph, you might think it was a bit unfair to come out so firmly in favour of the RX 570 in my GTX 1650 review, but there are still a couple of things to note here. Firstly, while Shadow of the Tomb Raider is a lot smoother for the GTX 1650 here, the RX 570 achieved the same average on the next graphics setting up. Likewise, you're starting to enter the realms of high refresh rate monitor territory with the RX 570 here (just look at that massive lead over on The Witcher III), while the GTX 1650 is still averaging below 60fps on this setting.

Moreover, as you can see from the Medium settings graph below, the RX 570 creates an even bigger performance gap here, offering 10fps boosts in Final Fantasy XV and Shadow of the Tomb Raider (although as I've noted before, Medium seems to be weirdly identical to Tomb Raider's High setting in this particular game), and almost an extra 20fps in Metro Exodus. 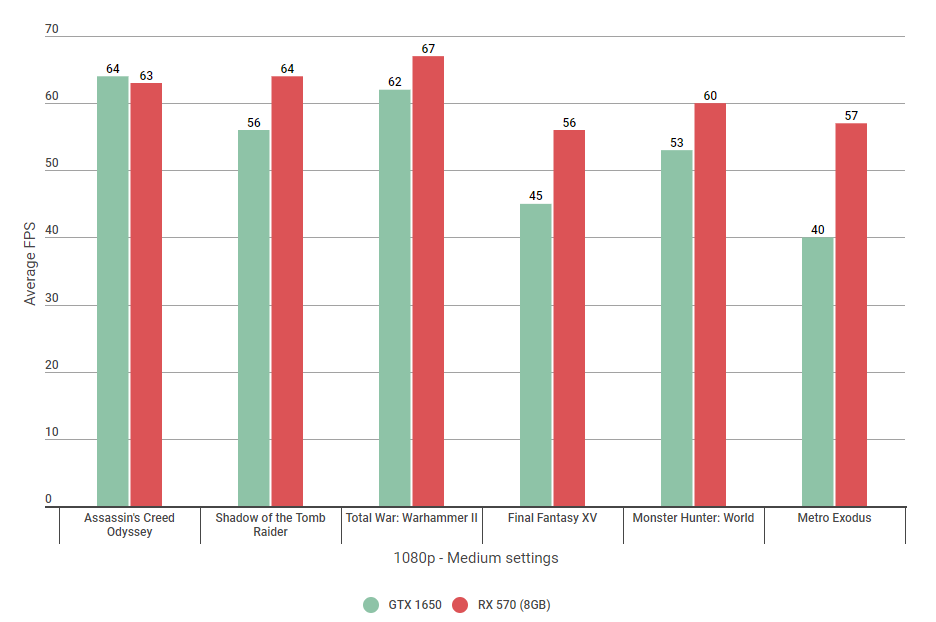 For me, that's enough to tip the scales in the RX 570's favour at this resolution, as it's not only able to offer better speeds on the very top settings, but it's also able to hit 60fps much more consistently down on Medium settings as well.

But it's not just 1080p where the RX 570 comes out on top. It's also able to offer superior performance at 2560x1440 as well. I've stuck with just Medium settings for this resolution, as even this is a bit of a struggle for these particular cards, but as you can see below, on average the RX 570 is faster in every single game. 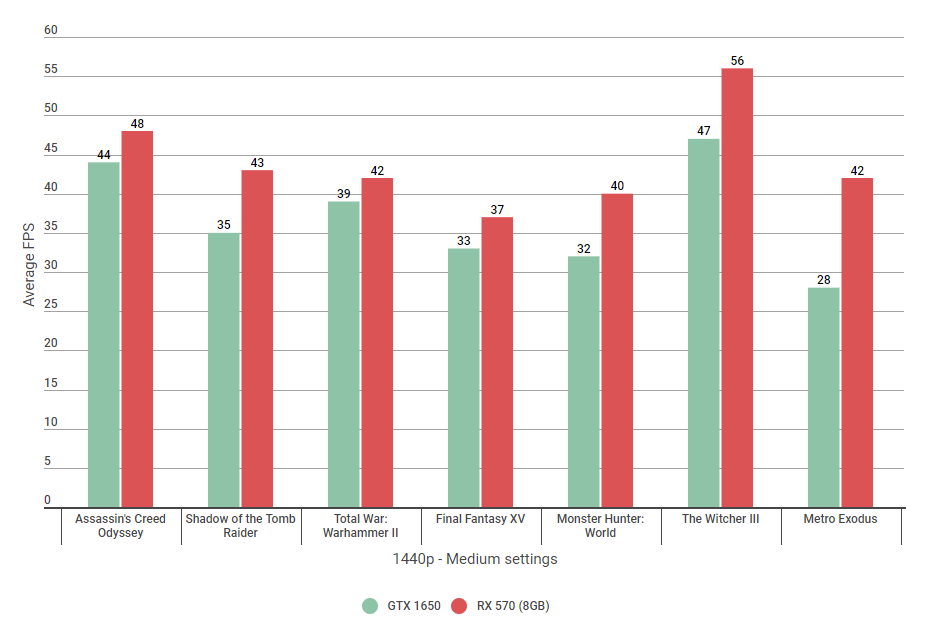 At this resolution, the RX 570's 8GB of memory really comes in handy, giving it a massive leg up when it comes to dealing with higher resolution texture packs. Just look at that Metro Exodus result, for example. Whereas the GTX 1650 is completely unplayable on the benchmark's Normal settings, the RX 570 managed an impressive average of 42fps, which is no mean feat considering how taxing it is. Likewise, even older games such as The Witcher III benefit here, with the RX 570 offering almost a 10fps lead over the GTX 1650.

These games are all still largely playable on the GTX 1650, of course, but with averages right down in the low 30s in most cases, it can be a bit borderline. The RX 570, on the other hand, is comfortably in the low 40fps zone in a lot of games here, giving it just that little bit of extra versatility for those with higher resolution monitors.

Overall, then, I think it's a clear win for the RX 570 here. The GTX 1650 pulls it back a bit when playing on High settings at 1080p, but everywhere else it simply can't match the speeds offered by its AMD rival, especially if you're looking to get a bit of 1440p gaming in there as well.

The GTX 1650 might still be worth considering if it suddenly came down in price (or the RX 570 suddenly got much more expensive), but when both graphics cards cost roughly the same amount of money - the Zotac's GTX 1650 OC, for instance, costs £139 in the UK, while the PowerColor RX 570 is £145 - you'd need a very good reason indeed to choose the GTX 1650 over the RX 570 right now. As I mentioned in my GTX 1650 review, it could be that you want to take advantage of the GTX's tiny stature to build a particularly compact PC, or you don't want to shell out for a beefier PSU given how it already draws all the power it needs direct from your motherboard.

But if you're just building a regular PC and want the best speeds for the least amount of money, then the RX 570 has the GTX 1650 beaten hands down. Plus, until June 8, you also get a free copy of The Division 2 and World War Z with the RX 570, which is arguably a much better deal than Nvidia's free Fortnite gear pack.