The Nvidia GeForce GTX 1660 Ti is finally here. Hailing from the same Turing family as the rest of Nvidia's RTX graphics cards but without all the fancy ray tracing and DLSS tech inside it (hence the lack of RTX moniker), the GTX 1660 Ti sure is one powerful graphics card - so much so that it's gone straight in as my new best graphics card for those after flawless 1080p performance. But how does it stack up to its closest RTX sibling, the RTX 2060? Is it worth spending the extra £70 / $70 and bagging yourself a ray tracing, DLSS machine? Let's find out via the medium of some handy graphs.

To see how both cards stack up across 1920x1080 and 2560x1440 resolutions, I've run each of them through my general games benchmarking suite. That includes Final Fantasy XV (albeit without Nvidia's fancy HairWorks, TurfEffects, VXAO and ShadowLibs effects turned on), Monster Hunter: World, Shadow of the Tomb Raider, Assassin’s Creed Odyssey, Total War: Warhammer II, Forza Horizon 4, The Witcher III and now Metro Exodus.

Paired with my Intel Core i5-8600K CPU and 16GB of Corsair Vengeance 2133MHz RAM, I've seen what each card can do on max settings at each resolution and taken an average frame rate (either from their own built-in benchmarks or from my own repeated manual gameplay tests) to see how they stack up against each other.

The cards in question are the Nvidia Founders Edition of the RTX 2060, and Asus' ROG Strix GeForce GTX 1660 Ti OC model, the latter of which is Asus' top GTX 1660 Ti card and probably one of the faster cards you'll see on sale from other third parties. This is thanks to its high base and boost clock speeds of 1500MHz and 1860MHz respectively, or 1530MHz and 1890MHz when its OC mode is engaged. For the purposes of this test, I left the GTX 1660 Ti at its default speeds to try and make it more representative of what the GTX 1660 Ti is capable of as a whole.

Of course, many of you might be wondering, 'Hang on a sec, that Asus is a massive triple fan job when most GTX 1660 Ti cards are much smaller and only have a single fan - won't that affect performance?' And you'd be right. This particular Asus is probably going to be one of the better case scenarios for GTX 1660 Ti performance compared to the rest of the cards out there. However, I've also been testing one of Asus' other GTX 1660 Ti cards, the single-fan Phoenix edition - albeit not to quite the same extent as the ROG Strix OC - and have only found it to be on average 2-5fps slower than its more upmarket sibling (and more often than not just 2-3fps), so I'm pretty confident the results below can be applied just as easily to other single-fan cards you might be looking at.

With that in mind, let's get down to some graph action. 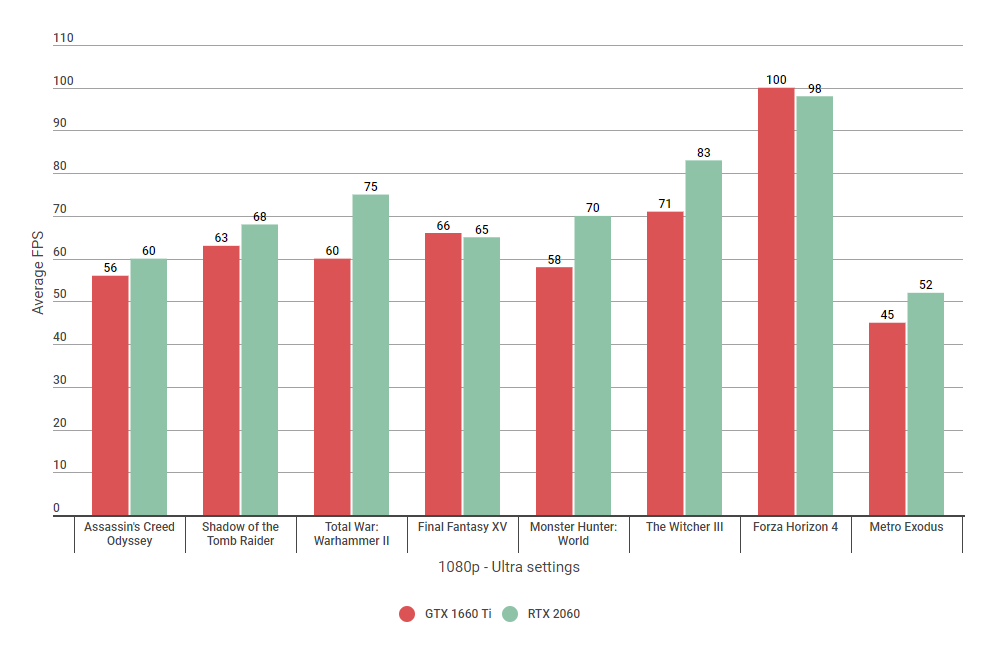 At 1920x1080, the GTX 1660Ti is an exceptionally capable graphics card. As you can see from the graph above (click to expand), it's able to hit at least 55fps in every game going (aside from the tough-as-old-boots Metro Exodus) on Ultra settings at this resolution, and in some cases can even push it up to 60-70fps - which is pretty impressive considering its price of around £260 / $279.

The RTX 2060 is extremely nippy at 1080p, too, of course, hitting an average of at least 60fps on max settings, if not closer to 70-80fps. On the whole, though, there's not actually a huge amount in it between these two cards here, and in some cases, such as Final Fantasy XV and Forza Horizon 4, the RTX 2060 was actually a fraction slower than its GTX 1660 Ti rival.

The RTX 2060 is arguably a better buy for those with high refresh rate monitors here, particularly given its tendency to hit between 70-80fps at this resolution, but if you've only got a regular 60Hz monitor, then I'd say the GTX 1660 Ti still provides more than enough speed here, even once you factor in the potential 2-5fps drop I mentioned earlier for single-fan cards. 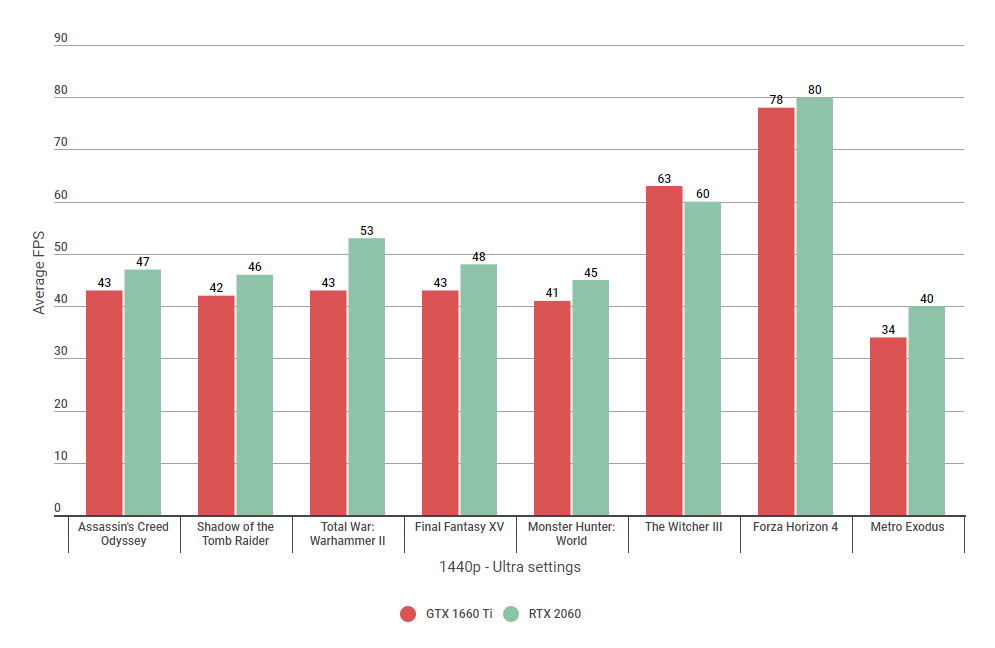 Where the RTX 2060 starts to distinguish itself, however, is playing games at 2560x1440. Again, on Ultra settings, there isn't a huge amount in it when you look at the individual numbers for each card side by side, but when you're teetering around the mid-40s mark for a lot of games, a couple of extra frames can make a surprisingly big difference in overall smoothness.

There are still a couple of cases where the GTX 1660 Ti shows up the RTX 2060, though, such as in The Witcher III where it's actually an average of 3fps in front on Ultra settings, and Forza Horizon 4 where it's just an average of 2fps behind, also on Ultra. This, I'd argue, is quite telling. While I fully acknowledge that The Witcher III's figures are far from being indicative of all 'older games ever created', it does suggest that you probably won't see a huge amount of benefit opting for the more expensive RTX 2060 with these types of elderly titles, so you might as well save yourself some cash in the process by going with the GTX 1660 Ti.

The same goes for Forza Horizon 4. As one of the more well-optimised blockbusters to come out in recent months, this would seem to suggest that less demanding games are also better off with the GTX 1660 Ti, as the performance boost just isn't large enough to really warrant spending the extra cash. Indeed, while I haven't included it on the graph above, the equally well-optimised and fast-paced shooter Doom bore a similar outcome, as each card was able to deliver frame rates of at least 90fps, if not 100fps, on max settings at both 1080p and 1440p, so why go for the RTX 2060 when the GTX 1660 Ti will do just as well?

However, while the RTX 2060 might have the edge playing on maximum settings at 2560x1440, it becomes a much closer run race when you drop the quality down to High. Disregarding the games which could already hit 60fps on Ultra, you'll see below that even the GTX 1660 Ti can deliver a comfortable 58fps in most places here, which is plenty fast enough when you've only got a 60Hz monitor to play with. 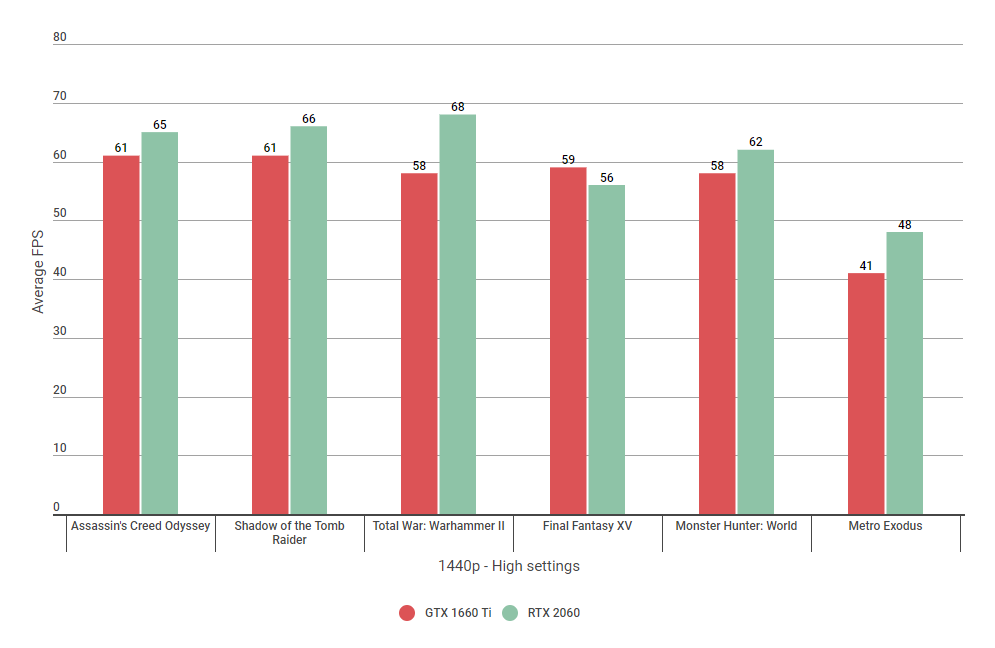 Metro Exodus is still a sticking point for the GTX 1660 Ti at this setting, of course, and it also won't benefit from the game's performance-boosting DLSS tech, either, which is available on the RTX 2060. The results above are without DLSS to keep things fair, but needless to say, anyone thinking of buying a new graphics card to play Metro at the moment should almost certainly consider the RTX 2060 if they want to play it at the game's absolute best.

Similarly, the RTX 2060's ability to regularly hit 60-70fps in other big games is probably worth the extra expense if you've got a high refresh rate monitor. On the whole, though, I'd say the GTX 1660 Ti is much better value for money overall here, particularly if you're not really that fussed about whether you play games on High or Ultra.

As a result, anyone looking to buy a graphics card for top notch 1080p gaming or almost top-notch 1440p gaming should almost certainly consider the GTX 1660 Ti over the RTX 2060, in my opinion - unless, that is, you've either got a high refresh rate monitor or want to get in on all this ray tracing and DLSS malarkey. Otherwise, I just don't think the performance jump you get by opting for the RTX 2060 is really enough to warrant the extra £70 / $70.

Admittedly, it would probably be easier to make a case for the RTX 2060 if more games supported all those nice RTX features like ray tracing and DLSS. But when the list of confirmed ray tracing and DLSS games is still so piddly (not to mention the even titchier list of them that can actually take advantage of it in-game right now, which is just Metro Exodus, Battlefield V and Final Fantasy XV at time of writing), there just aren't enough compelling reasons to recommend it in the face of the GTX 1660 Ti's stonking speeds.

As such, the GTX 1660 Ti is now my new best graphics card recommendation for flawless 1080p play, as well as my top suggestion for what people should actually buy when they're looking for a decent 1440p card. The RTX 2060 still hangs on to its overall best graphics card crown for 1440p (just) given its superior speeds and greater capacity to play games on absolutely max settings without spending an absolute fortune, but in terms of value for money, it simply can't compare with the excellent GTX 1660 Ti.