If you click on a link and make a purchase we may receive a small commission. Read our editorial policy.
Premature Evaluation is the weekly column in which we explore the wilds of early access. This week, Fraser’s been tempted by the opportunity to become fantasy RPG Olorun: Theocracy’s hardest-working blacksmith.

Douglas Hammer, or Doug if you want to be informal, was a blacksmith. None of that sword-waving, monster-slaying malarky for ol’ Doug, no thank you. Nominative determinism may have played a role, but it was mostly the money. There isn’t safer, steadier work in a fantasy RPG. As long as everyone keeps being scared of monsters, they’ll be wanting sharp weapons and solid armour. When I picked his profession, I dreamed of a sedate life, working away at the forge like a content NPC. It did not, as I am sure you are shocked to discover, work out as planned. 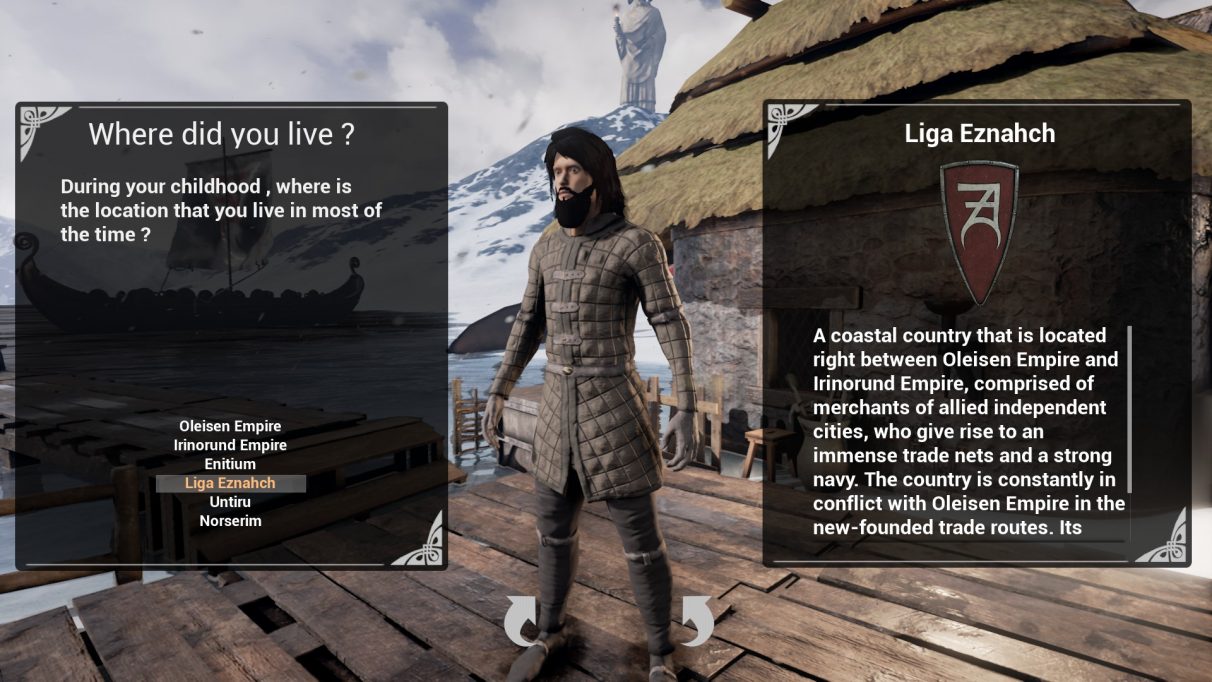 Instead of starting my new life at home, in the random empire I half-heartedly selected after reading a dull, but mercifully brief, lore dump, I find myself on a ship. I'm starting an even newer life, it seems, in a different land. Unfortunately, the ocean has other ideas. A violent storm followed by a kraken attack could have been an exciting introduction to Olorun, but instead it shines a spotlight on all the ways that it struggles.

My very first task is to speak to the first mate, and even that coughs up some problems. I stagger around in the dark - a tutorial that obfuscates the player’s vision probably needs a rethink - until I realise he's probably upstairs, near the helm. Unfortunately, stairs are a major obstacle. Most of them are completely insurmountable, and the few that can be scaled can only be done so by jumping. 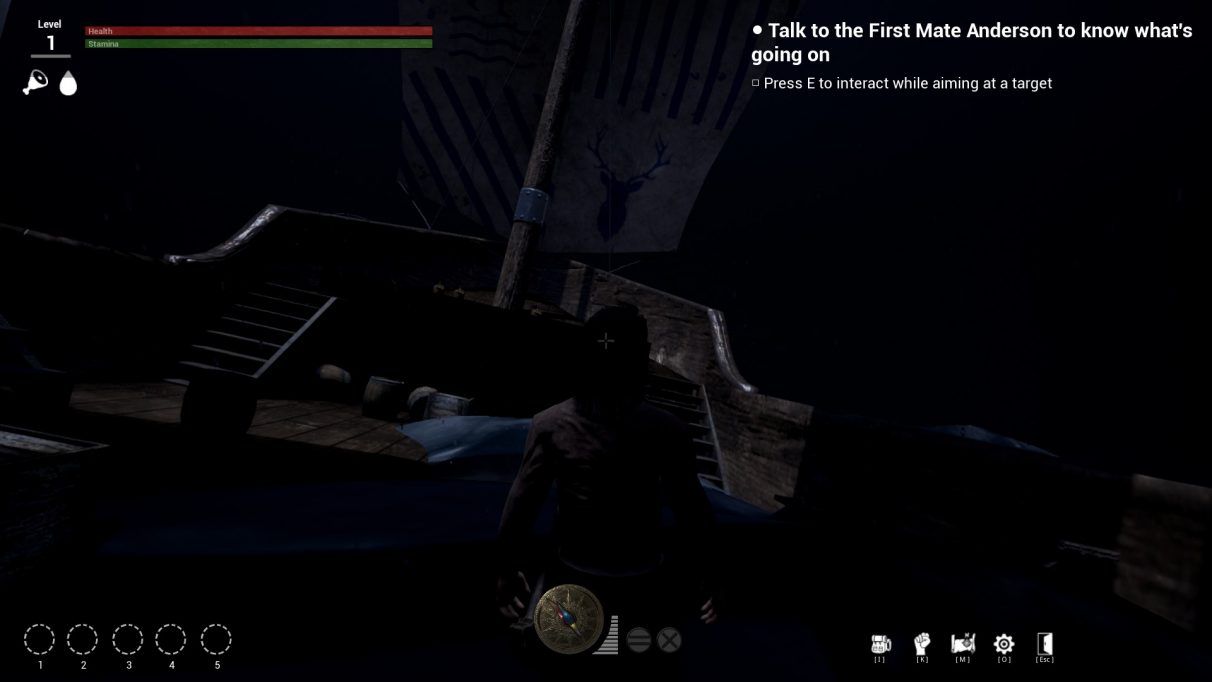 With the storm hammering our poor ship, the sailors need planks of wood to make repairs, which means I need to break some barrels and boxes. To swing a weapon, you need to hold down the attack button and then control the direction of the swing using the mouse wheel. It’s one of the most awkward executions of melee combat I’ve ever had to muddle through, but thankfully barrels proved to be easy opponents. Olorun seems to be aiming for the kind of duels you might be familiar with if you've played For Honor or Chivalry: Medieval Warfare, but it's not up to the task. It makes much more sense to choose the direction by moving the mouse instead of the wheel, and it's even implied that you can do that, but instead that just moves your body. The result is sluggish, counter-intuitive combat that made me very, very glad I was a blacksmith and not a soldier.

The kraken finally appears, giving me the opportunity to fight an actual monster, though nothing changes. The big, disgusting tentacles just sit there while I flail in their general direction. The biggest issue with combat, aside from the terrible controls, comes from the weird hitboxes. Attacking exactly the same spot can conjure up different results, with weapons even clipping through enemies and doing no damage at all. It’s also not possible to crouch or aim below you, making it very difficult to attack anything that’s shorter than a human. You will be attacking a lot of things that are shorter than a human. 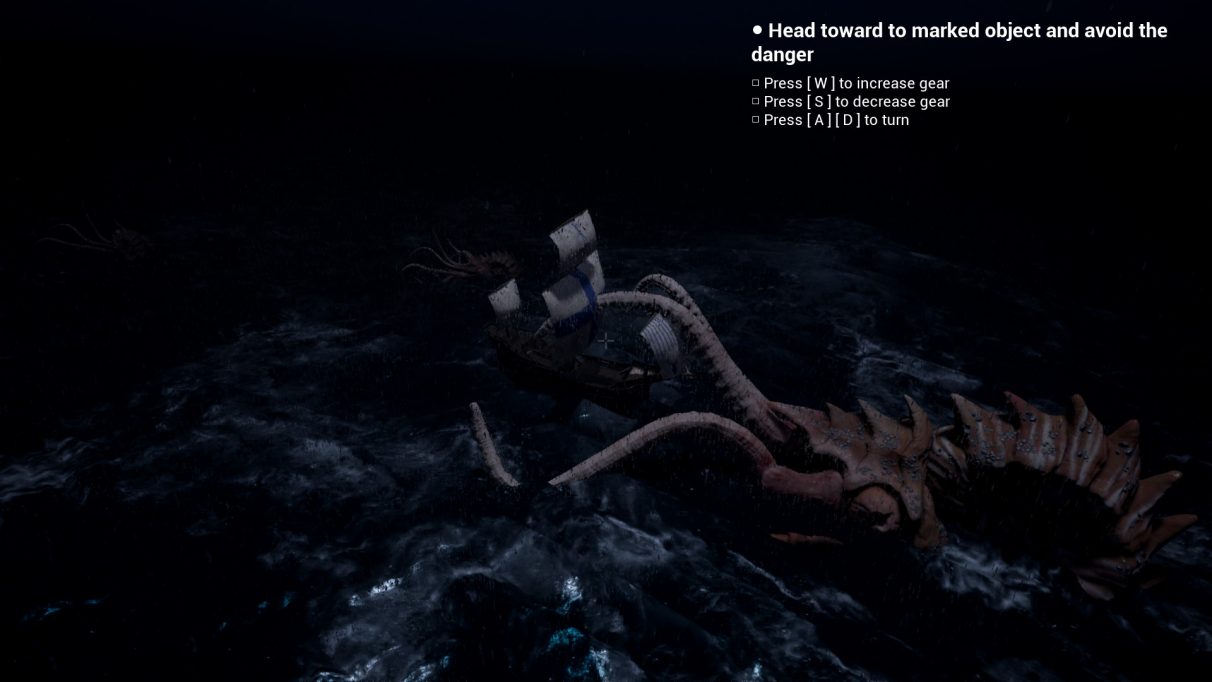 Eventually we defeat the kraken, but it brought a bunch of mates along with it. Big mates. The biggest of them all proves to be a bit much for us, and the ship goes down. I wake up on a beach and that’s the last I’ll ever hear of my ship and its crew. Nobody in the nearby village cares, and neither, apparently, do I. Doug Hammer has no time for sentiment, it seems.

The tutorial is the only place where Olorun has any direction or momentum. As much as it feels like it’s held together by sellotape, there’s struggle and tension and sailors getting squashed by tentacles. From the beach onwards, it’s nothing but a big, empty sandbox. I wander the town, looking for things to do, but come up empty. At the bustling port on the other side of the island, there's a similar dearth of activities. Olorun might bill itself as a “medieval-style fantasy RPG”, but it isn’t any kind of RPG at all. Not yet, anyway. We can quibble about what constitutes an RPG, but it’s still hard to imagine one without quests or a narrative. Olorun has neither. 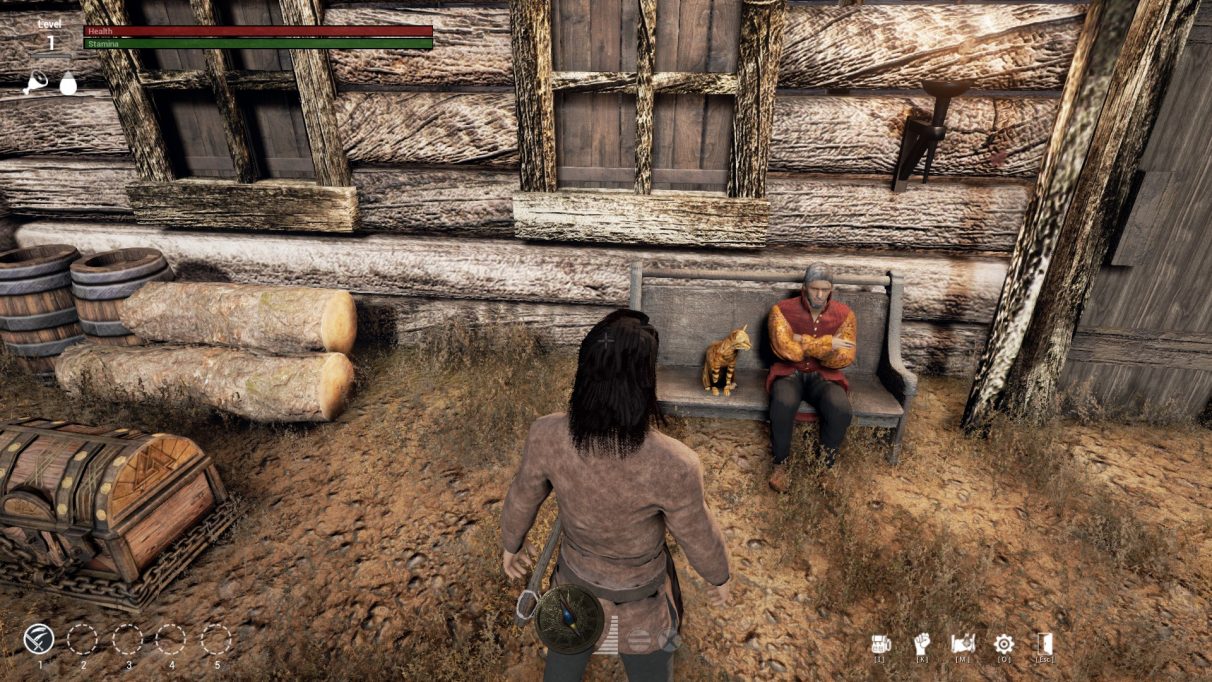 Towns, then, of which there are only a few, simply serve as places to craft and shop. Optimist that I am, I take it all in my stride. After all, what does a blacksmith need with quests? Once again firmly entrenched in the survival-crafting mindset, I strike out into the wilderness to look for resources that I can turn into tools and weapons. First item on the list: spruce logs. I'm completely surrounded by spruces, so I get to work. It takes a few minutes before I realise that my intense chopping is going entirely unnoticed by the tree. And the next one. Try as I might, I can't so much as chip a bit of bark off one of these indomitable forest wardens.

Exasperated, I start chopping away at a broken branch that the game informs me is cypress wood. That’s where I get my first spruce log. I find more scattered all over the forest, until my infinite inventory is fat with logs. Confused, I wander back to town, selling what I don't need and storing the rest. Eventually mining is added to my list of tasks, and after an hour or so of work I have a decent amount of cash and some funky wood armour. I'm pretty miserable. 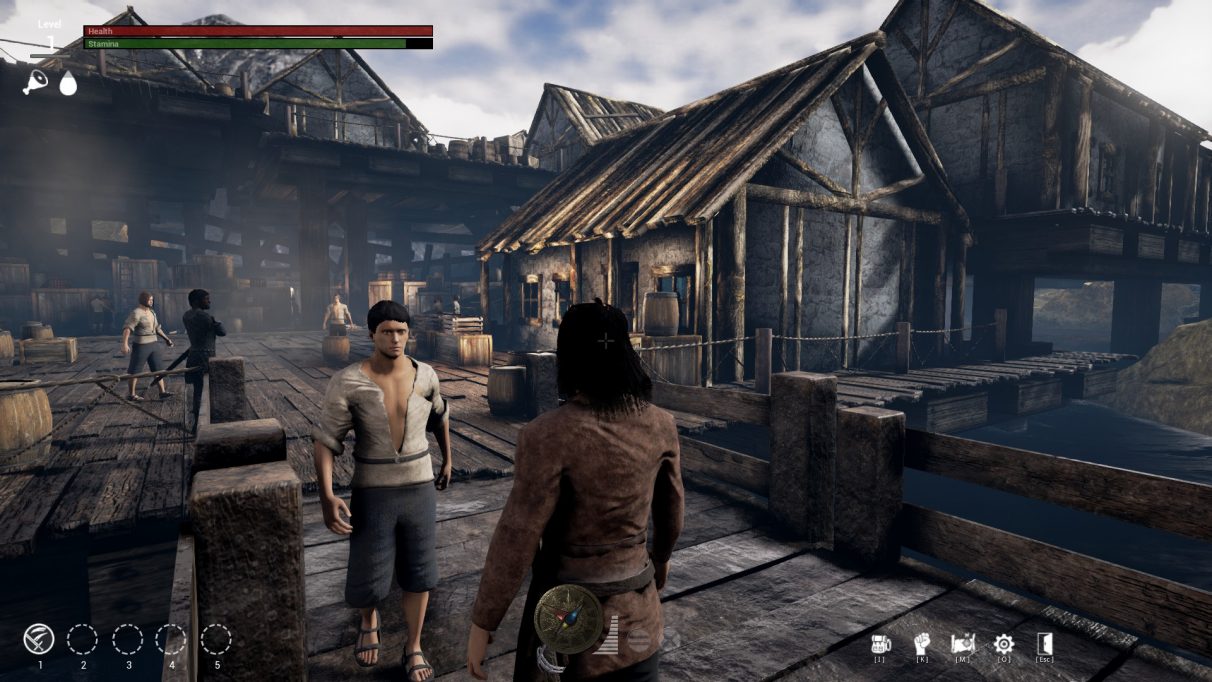 The most exciting thing to happen to me is getting chased by a wolf right into a village. As it tears me apart, my screams go completely ignored. I look right into the eyes of the headman, and he doesn’t bat an eyelid. It takes a village to do absolutely nothing and let a poor blacksmith die. Conveniently, I respawn right next to where I died, but it's pretty awkward when I then have to sell some ore to a guy who literally stood by while a wolf snacked on my entrails. The wolves never stop being an issue. Even armoured, I die before I can land three blows.

When the wolves aren’t trying to kill me, it's thirst and starvation. The food and drink meters deplete at a quick pace, necessitating foraging and hunting, or failing that a trip to a food stall; or at least it would if the system wasn’t broken. Simply going into a new area, the town for instance, fills up the meters, not entirely but enough so there’s rarely the threat of death. 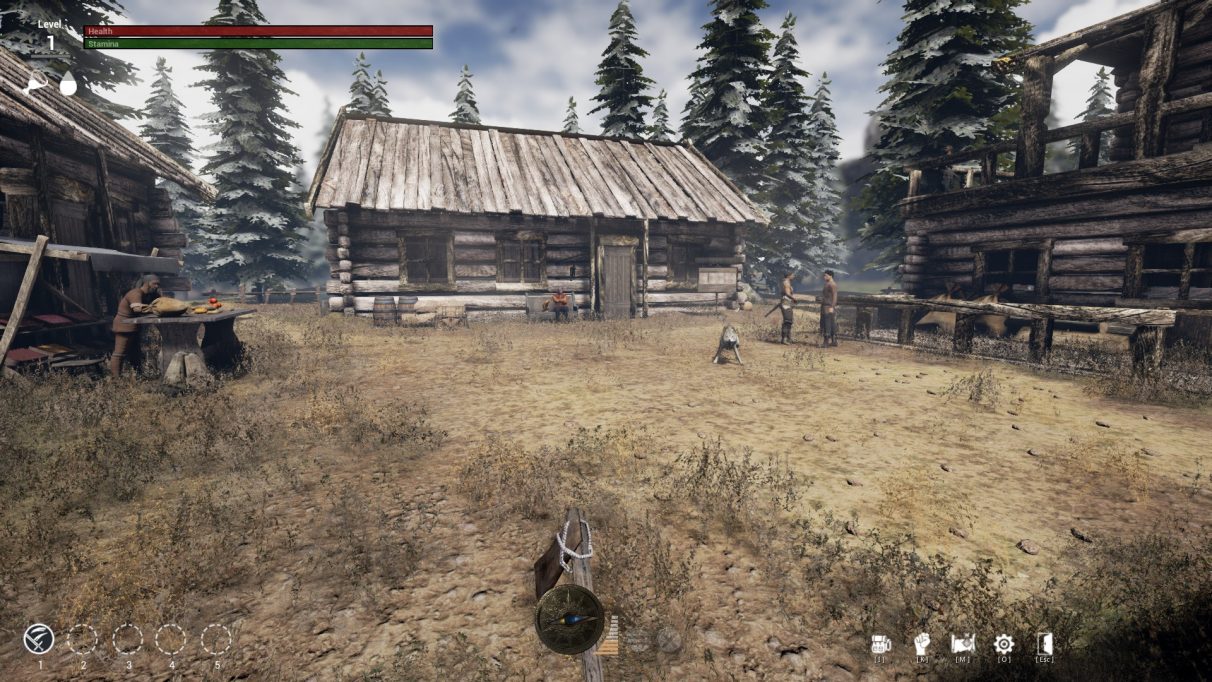 I don’t know what to do with my money. I may technically be a blacksmith, but I don’t have a business to invest in. I scrounge up materials, turn them into stuff at the real blacksmith’s forge and then I sell them for a flat fee. There are flashier items I can make, better weapons with sturdier materials, but then I’d just be richer. Also, I'd need more skill points to unlock them, and despite toiling away in the woods for hours, I've still failed to level up even once. I suspect it's more tied to combat than crafting, but it's yet another thing that Olorun fails to make clear.

Disillusioned with island life, I charter a ship and head to the big city. Lamentably, it and the wilderness around it are just as empty of diversions as the island. It’s an eerie place to walk around. It bustles with NPCs, but none of them have anything important to say, and it’s full of buildings, but you can’t enter a single one of them. These aren’t small areas, either, but their scale only draws attention to how hollow they are. 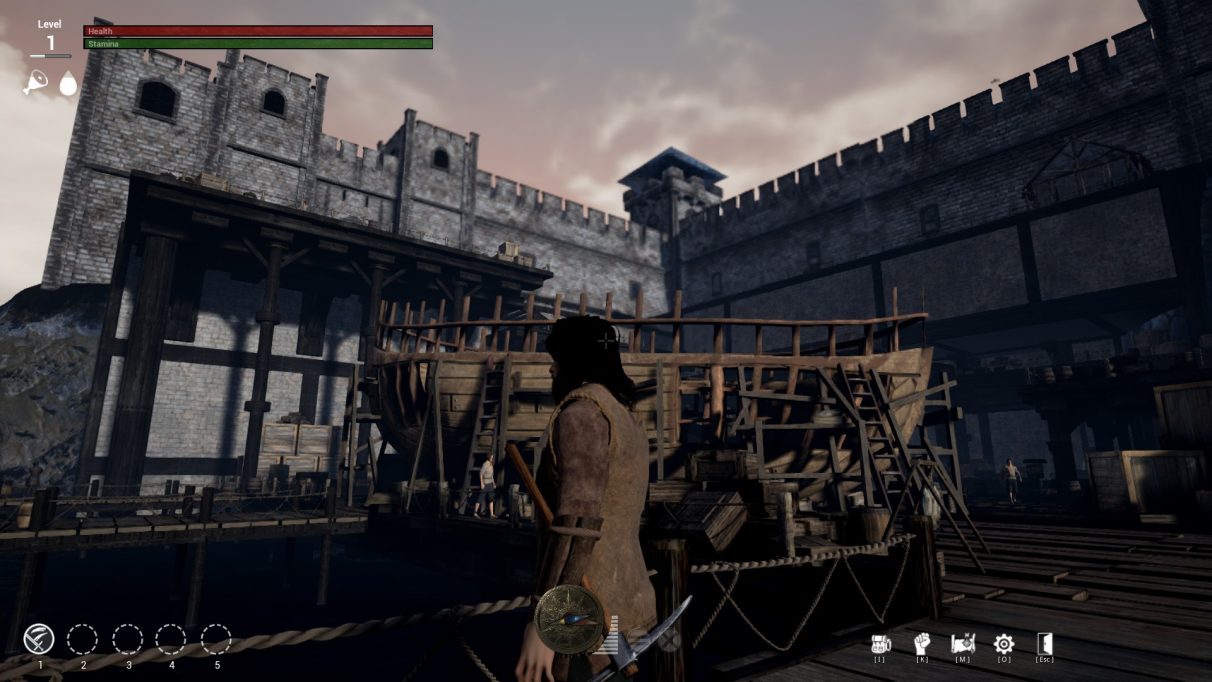 Olorun: Theocracy is a space on which a game might one day appear, with quests filling its towns and adventures egging you on to delve into the occasional wolf-infested cave, but I’m not convinced. It’s missing even the most basic foundations of an RPG, and it looks like other planned features will only appear if the sales are enough. So you can make farming tools right now, for example, but you might never actually be able to use them. There just doesn’t seem to be any logic to what’s been implemented and what’s still in development. At best, it’s a light survival-crafting game, and not even a competent one.