If you click on a link and make a purchase we may receive a small commission. Read our editorial policy.
Developer: National Insecurities
Publisher: Humble

Everyone is dead when you arrive at The Mount Inn. Well, almost everyone. Only the bartender is left alive, among a scattering of cowboy corpses. “My memory is little hazy” he says. “Don’t know why.”

It’s probably because he has a knife stuck in his head. This is Once Upon A Crime In The West, the third murder mystery game from the folks who made 2000:1 A Space Felony. It’s a crime story, but also a western, but also a comedy, but also a Christmas game. So the exact genre is as much a mystery as the pile of cadavers. It’s like arriving late to a Tarantino movie and trying to reconstruct the plot while stepping over all the blood.

The obvious touchstone is Return of the Obra Dinn, as this is likewise about walking around a small setting, piecing together killers and victims post-bloodbath. But it also has the jump cuts and cutaway drum beats of a Blendo game, and its own colourful and unserious approach to storytelling. This is a whodunnit where all the suspects move with the comical stiffness of animatronic machines in a theme park, juddering with each slight gesture.

It also takes place on “the twelve days of Christmas”. This remote inn, it turns out, is hosting a bunch of holiday reprobates. And you get to travel back through these twelve days to watch and listen as they threaten each other, whisper conspiracies, and idly shoot cans from a log outside the inn. You can watch these short scenes in any order, flipping through the days with the scroll bar thanks to a magical camera, each day appearing as a colour in a photographic reel above the screen. 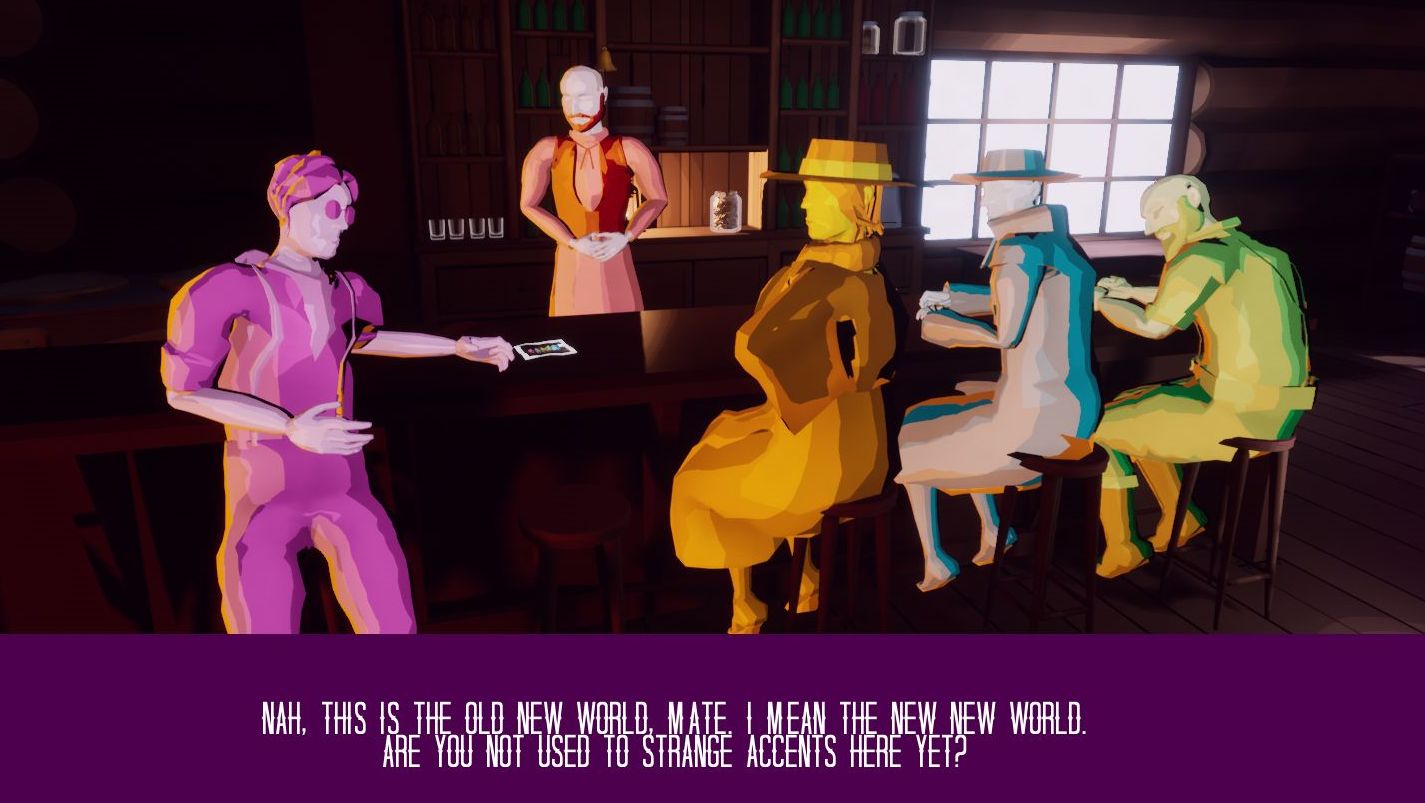 It feels a bit eager at times, a UI that is maybe too minimal and trusting. If your scrolling comes to rest on one of these days for even a short while, it’ll launch right into that day. There’s no clicking to confirm. But you eventually get used to this, discerning the day by the drum beats that accompany each drag of the mouse wheel. The important thing is you can jump from day to day in whatever order you like. (Although you can’t rewind and watch the scenes again, and I’m sure I’ve missed important details because of that.) 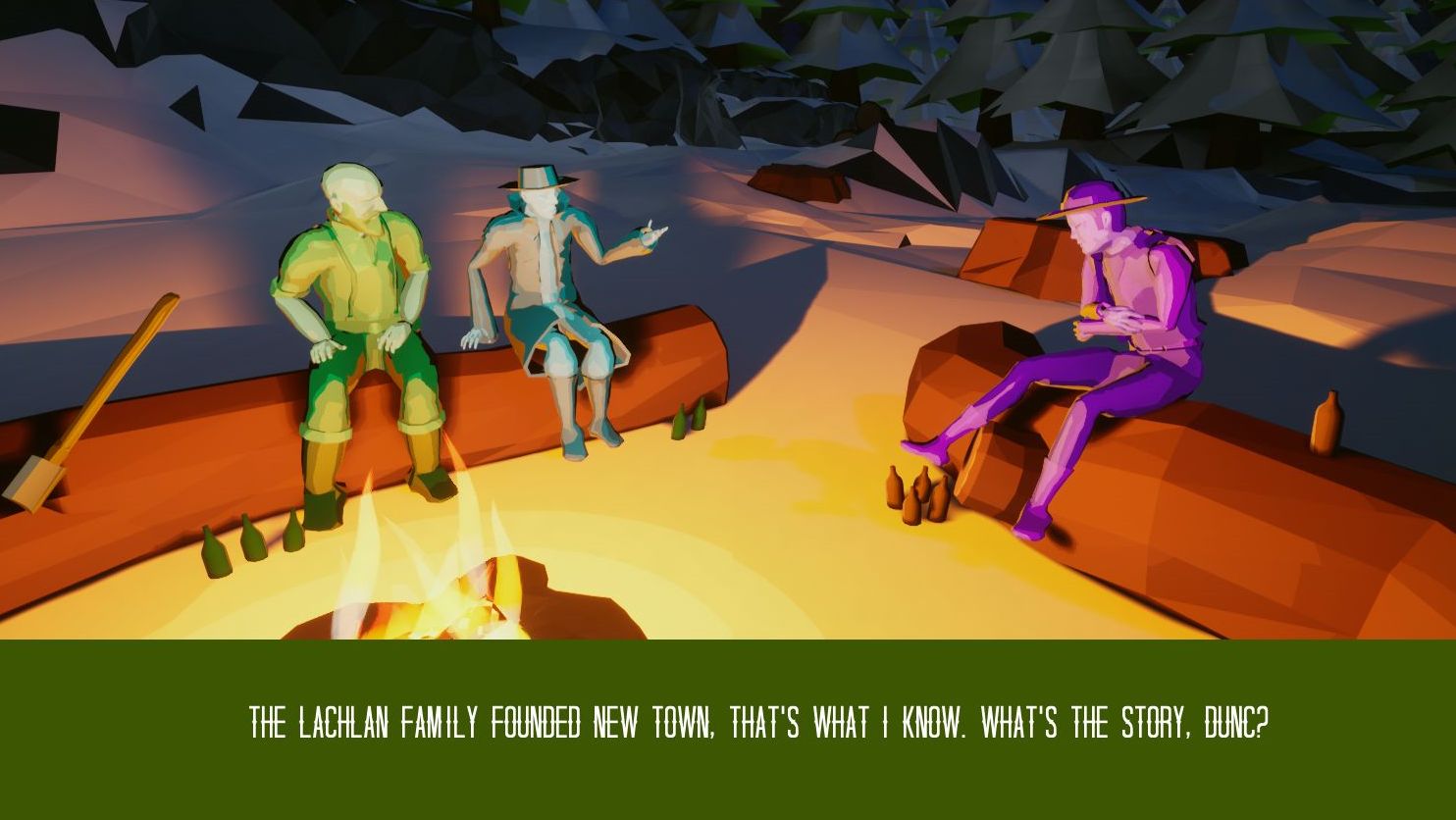 But never mind, there is something else it does that I love. In each scene, it gives you some small task to do as the chatter goes on around you. On one day, you sweep the floor while the barkeep and a guest talk about the nature of trust. In another scene, you play the piano (badly) as two conspirators make plans within earshot, and if you stop tapping keys for long enough, one of them will remark on that. But one of my favourite scenes has you carrying a jar and asking all the patrons of the inn to drop their weapons into it, as per the barkeep’s new rules. Seeing the jar overflow with guns as one bounty hunter empties his entire hidden armory brings a new perspective to an old gag and, like many moments in this crime story, it made me laugh. That idea of giving the player some trivial thing to do has been in this developer’s games since they had us sipping whiskey on the Murder Express, and I love that this instalment runs with it, all the way to an indecipherable card game. 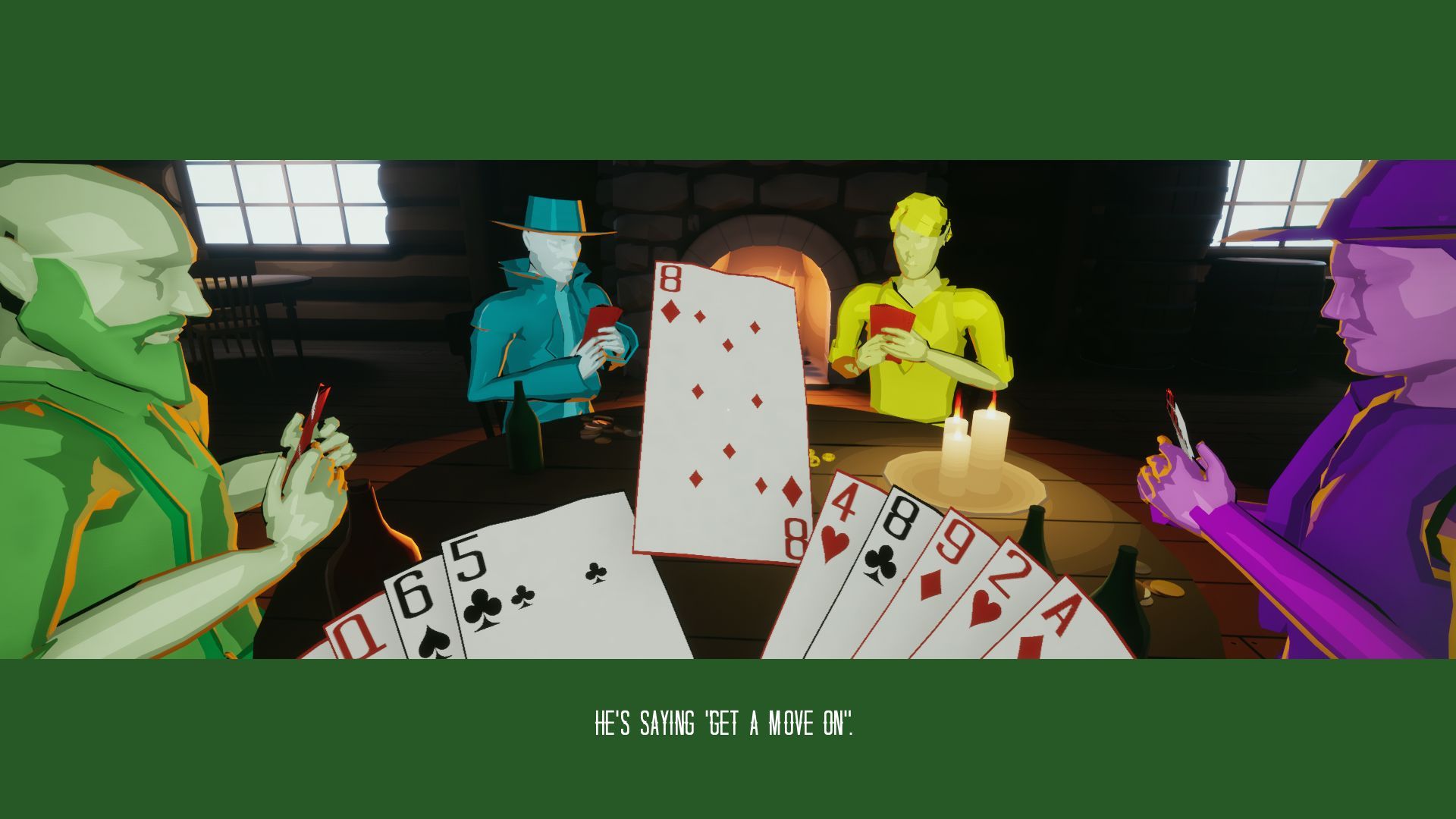 Exploring the twelve memories is most of the game, but some time is also devoted to the Twelfth day of Christmas – the present day - in which you take photos of the corpses and pin those pictures to any wall or surface in the bar. Then you pull strings from one photo to another in order to assign blame. It’s a cool little process, and the barkeep will remark on each correct or incorrect murderstring. Although I had a problem when I couldn’t figure out how the last three photos fit into my death web. I’m told you can show the pictures to the barman to have him drop some hints, but I never understood this in the moment, which meant I gave up in those final pivotal moments out of frustration and a lack of guidance and resolved to go back to it later. (Don't follow my example - the game is so short it doesn't have a save function. Whoops.) 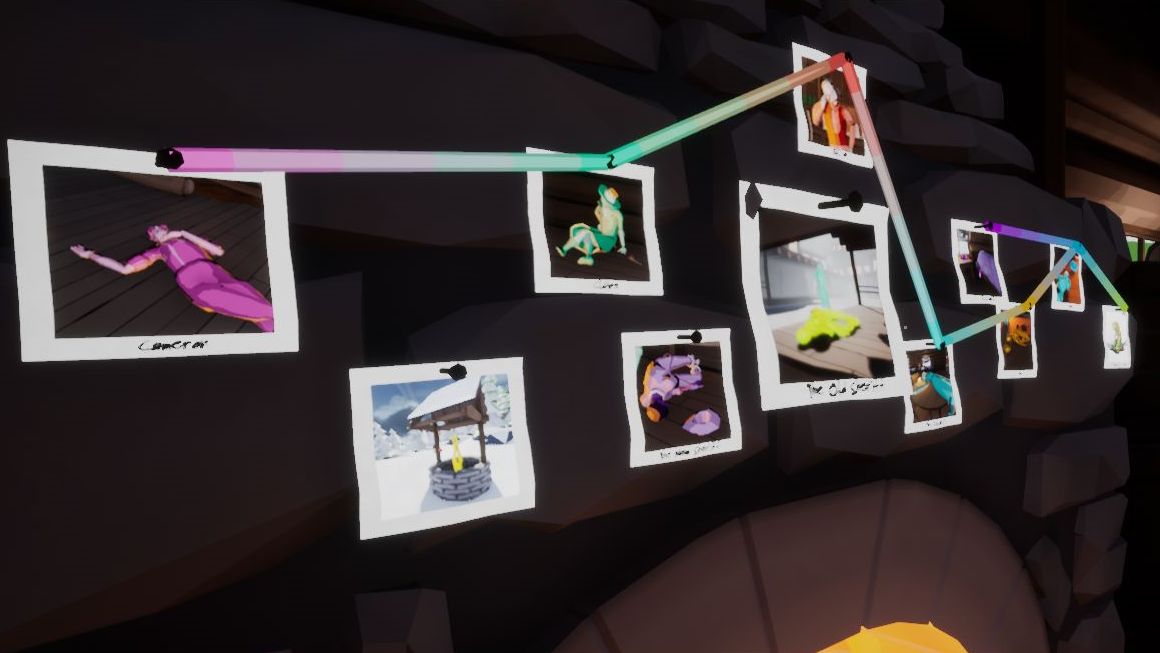 There are other imperfections. One character’s voice acting in particular is stilted and flat, a clear case of a voice actor reading into a microphone, instead of performing beside it. And there are a couple of meddlesome bugs. The important scroll bar of Christmas sometimes didn’t appear for me when it ought to have. And one scene would always repeat its final few seconds every time I revisited it, which is kinda helpful but probably unintentional. The other downside is that this is still a Humble Original release for now, so you can only get it as part of the Humble Monthly subscription thingo (although it’ll come out for everyone at some point). Crucially, you can’t help but compare it all to that big naval mystery sitting in the corner: the Obra Dinn. 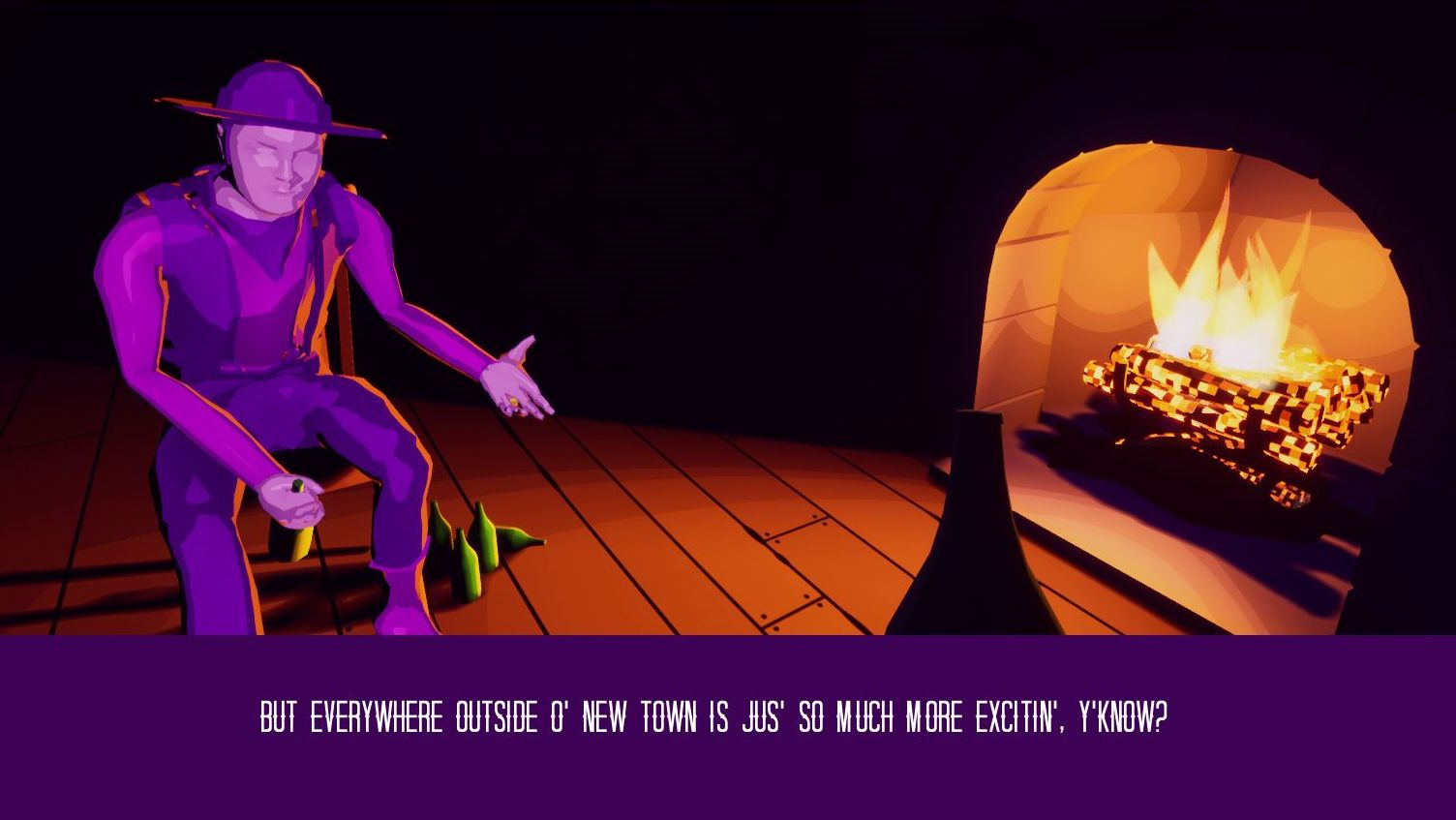 This is perhaps a little unfair. Developers National Insecurities have now twice had the bad luck of releasing short games that co-exist with longer ones which do similar things. 2000:1 A Space Felony, a funny sci-fi caper about investigating a post-disaster space station, came out at the same time as Tacoma. And this is coming not long after the excellent Obra Dinn, which uses its own magical time do-hickey to investigate past crimes. But these shorter games have the benefit of punchiness and comedy, parodying the tropes of movies as much as it plays with videogame verbs. It would be a shame if they went overlooked by anyone who enjoys a laugh and a good nosy around a crime scene.

Disclosure: RPS contributor Xalavier Nelson Jr voiced one of the characters in this game, but I have no idea which one. Probably the dead one.