If you click on a link and make a purchase we may receive a small commission. Read our editorial policy.
Developer: Julian Laufer
Publisher: Headup

The last few years have seen quite the coming together of gaming platforms. Walls that seemed eternal have come tumbling down, as publishers like Capcom and Konami have brought console exclusives to PC, cross-platform play has become more common, and even Nintendo has released its own IP on non-Nintendo machines. You can even get Mario Kart on your telephone. But sadly, as much as this intermingling has improved things, there has yet to be even a whisper of any Nintendo classics reaching PC. Which is my long-winded way of saying: there’s no way to play Metroid on a computer. And that’s a damned shame, because that series offers some of the finest platform games ever made in two or three dimensions.

So it is with a very glad heart that I bring you word of Outbuddies - a PC Metroid-like that holds a very respectable candle to the franchise.

There’s a strong temptation now to do one of those reviews which is essentially holding two games up and saying how they’re different. This would be very useful to someone familiar with either game, but useless to everyone else. Still, it’s testament to Outbuddies’ successes that it’s even an option to hold it in one hand and Metroid in the other, and draw lots of lines between the two. Please could you draw the lines for me? My hands are both busy holding both of these games.

Admittedly, Outbuddies doesn’t manage the sheer perfection of those early 2D outings for Metroid hero Samus. But heck, it’s been 15 years since Nintendo even released an original game in that series (yes, Samus Returns was amazing, but still a remake), so it’s wonderful that someone’s doing it at all.

But wait a second, silly man, there are LOADS of Metroidvanias on PC! Steam is drowning in them, and some - like Hollow Knight and Ori and the Blind Forest - are all-time classics. What are you even talking about? Well, slightly rude reader, the joy here is that Outbuddies is much more specific than a Metroidvania. What we’ve got here is Metroid, if it were made for ‘90s DOS, with slightly less QA.

Welcome to Bahlam, an underground and rather soggy realm beneath the Atlantic ocean. You, I can assure you, are Nikolay Bernstein, a shipwrecked maritime archaeologist who finds himself miles beneath the sea, tethered to a sort of floaty-robot thing called Buddy. Exploring this realm of the Old Gods, you discover a friendly gang called the Wozan, many of whom have vanished and need a spot of rescuing. And so it is that you’re off into a world of labyrinthine chambers, tunnels and underwater passages, where you gradually acquire the tech and skills you need to expand the areas available to you.

It is, in every sense, a Metroid-like, complete with colour-coded doors opened by improved or additional weapons, areas you can't quite reach without a new skill, and screens that re-fill with enemies every time you return to them. There’s an ever-growing roster of enemy types to deal with in different ways, naturally occasional boss fights, and that endless nagging urge to find a route to a greyed-out area on the map.

But despite boldly wearing its influences, Outbuddies isn’t a clone or a copycat - it has a lot of its own ideas to throw into the format, and they’re superb ones. Buddy is the most significant of them, being separately controllable in ways that become increasingly apparent the more you play.

Select Buddy and you can move anywhere in the large rooms, independently of Bernstein, but with very little ability to interact with the environment. This capability can be used tactically from the start, letting you scan ahead for upcoming enemies, or look for inaccessible areas. But Buddy has many more skills, including being able to scan any area of the screen, offering pictorial clues as to what new objects might be for, and - very importantly - highlighting walls that can be bombed to reveal secret paths and hidden rooms. Later he gains even more tricks, the most interesting being his ability later int he game to ‘hack’ certain enemies.

Some commandeered foes become platforms, others are explodimified, while others still are converted into very useful blocks. Because Buddy is also telekinetic, he's able to lift specific objects and move them around the room, perhaps giving Bernstein a route to reach an area previously too high to jump to. Buddy’s great, is what I’m saying.

Another addition to the formula I really like, and which you may very strongly object to, is Outbuddies' lenient approach to death. While there are save points, used when reloading the game, any time you die you’ll be returned to the moment you came into the room that killed you, with the health and ammo you had at the time. And you know what? That’s good! Re-running the same route from a save point seven rooms away to a bit you’re finding tricky isn’t fun. It’s boring. And this idea removes some boring. I’m right about this. 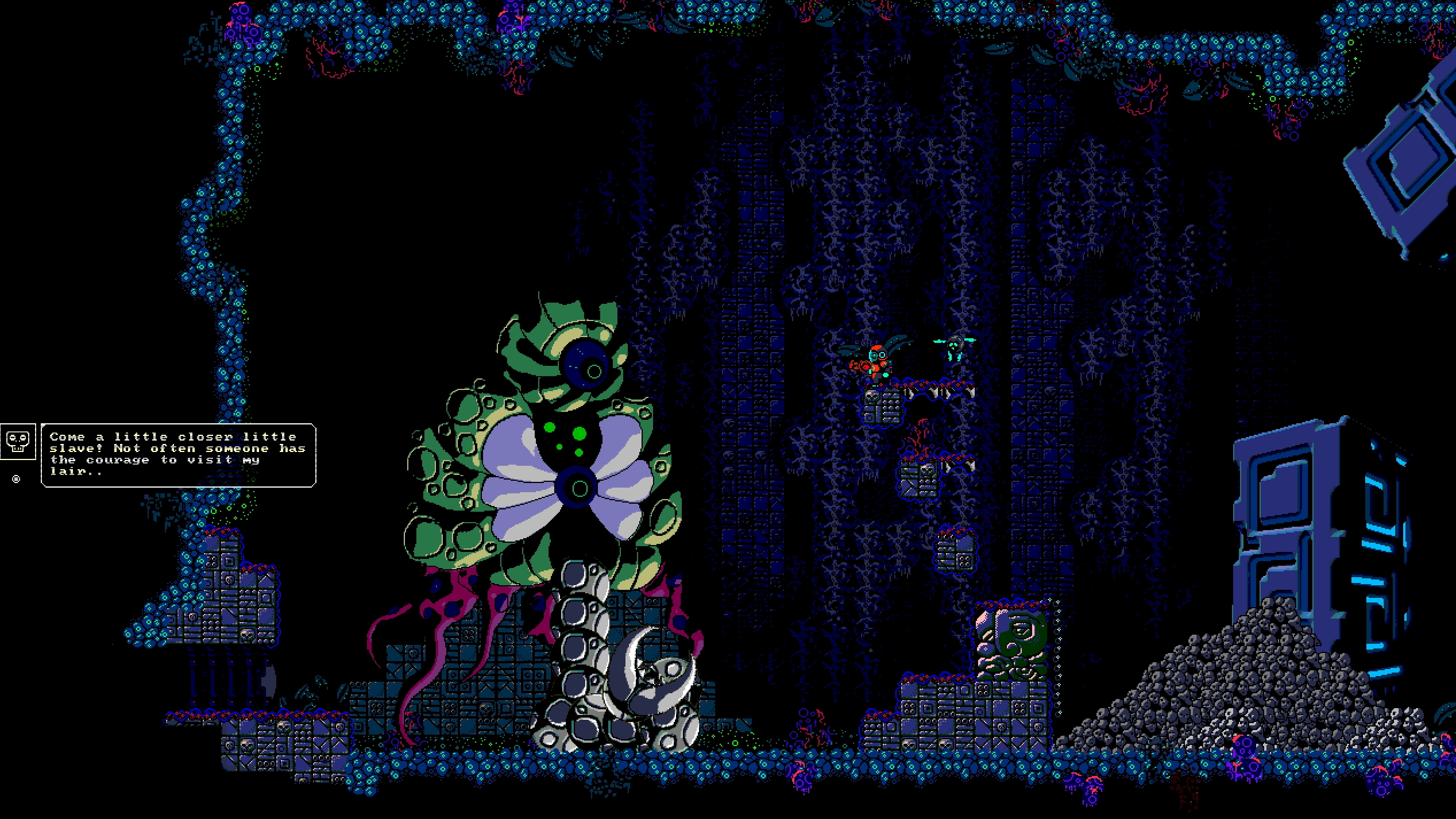 Of course, there are places where the disciple falls short of the rabbi. The most significant of these is direction. Where Metroid really shines is in its exquisite directing of the player, constantly tantalising with locked doors, then looping you back around to find them once again after they become available. Outbuddies certainly does not shine in this regard, and its ambiguous map can make the process of working out where you should be heading next a confusing one. And sometimes a frustrating one. I’ve nowhere near finished this absolutely enormous game, despite spending at least 11 hours with it, and at one point I had to resort to the game’s Discord to receive a (very kindly) prompt.

With that prompt the game blossomed out once more, and many more splendid hours were had, albeit punctuated with duller ones wondering where next to head. It all relies a little too heavily on explodable walls, which an old fuddy-duddy like me would prefer be reserved entirely for bonuses, extra missile packs and the like, rather than core progress. And of course with the aforementioned blossoming out came another issue: getting around. Where Metroid traditionally solved traversal with well-placed lifts, Outbuddies opts for teleporters, and then woefully underuses them, forcing a lot of needless retreading.

My other gripe is about the explanations given for new equipment. These are often illustrated with the most astoundingly tenebrous animations, which are indecipherable and unhelpful. However, this appears to be something that’s constantly improving. A section I flat-out couldn’t get past changed in an update to add a friendly Wozan explaining the intricacies of a new ability, rather than leaving me to rely on the nonsensical animation.

I’ve read a few grumbles about the controls, but I’ve not experienced these issues myself. I’ve been playing on an Xbox controller, and found the jumps and rolls eminently fair. The game's wall jump is a little peculiar, requiring that you pull away from the wall rather than toward it, and that takes a bit of getting used to. But used to it I did get. And I’ve even managed to get past the boss fights in just a few tries, without too much swearing, and without penning 3,000 word articles about how the entire concept ought to be banned.

There’s still a lot for me to do - this is a sizeable game, and a very compelling one. I love the DOS-like art direction, because I’m an old, old man, but I’m confident this isn't purely a matter of nostalgia. And it’s worth noting there’s a co-op version, where another player can play Buddy for you.

Oh, and I really need to point out: this game is made by one person! That’s ridiculous.

So yes, hands up, I did just compare Outbuddies to Metroid. I’m sorry. But so will you when you play it, or you’ll play this, love it, and then get hold of Metroid. Either way, they’re going to go hand in hand.

It’s phenomenal that a one-man team has created something that’s possible to compare, let alone so favourably, with a classic. This is my favourite Metroid-me-do since Axiom Verge, and it's preferable to me since it favours exploration and progression over ramping difficulty.

I’ve had a very splendid time with this, and have much splendid time left with it. A proper fine achievement, and a game worthy of measuring against the mighty Metroid.