Despite growing up in the ‘90s, I had never heard of Outcast. And as someone who loves open-world exploration, I don’t share that fact proudly. I’ve only ever known the shinier counterparts of last century’s genre defining titles, growing up with games like Bioshock, Fallout, and Wolfenstein, whose decades-old predecessors continue to influence modern gaming conventions. As such, I was a blank slate coming into the recently released Outcast – Second Contact, a remake of the 1999 cult classic.

What I discovered was a strange amalgam of new and old. Second Contact looks great and it's a clear precursor to the open world games that came later, but how does it all hold together without the rose-tinted lens of nostalgia to cover its weaknesses?

Though it was a commercial failure, Outcast garnered a cult following at the time of its initial release. Open world games were uncommon and the freedom given to players, along with the voxel engine and beautifully weird alien landscapes, made for something very unusual. Eighteen years later, the game has returned, but there have been many setbacks along the way.

The game’s developer, Appeal, went bankrupt trying to craft a sequel, and when studio veterans later launched a Kickstarter in 2014 to fund a reboot, they failed to meet their goal. Nonetheless, they reformed the studio specifically to create this revival, building on the original’s source code while incorporating modern technology to weave in new assets and UI elements. Their initial spring release date came and went, but last month finally saw the revamped classic’s release. 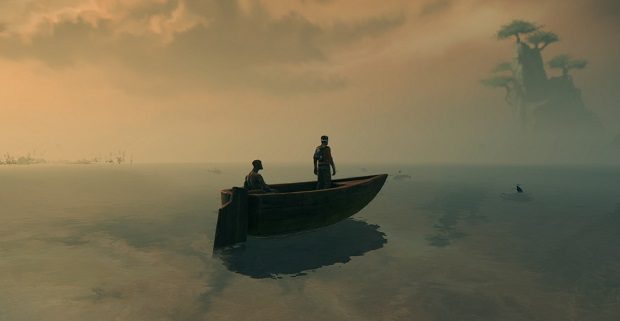 You play as Cutter Slade, a former Navy SEAL the U.S. military has chosen – based on the pure manliness of his name, I assume – to escort a team of three scientists on a mission to a recently discovered parallel universe. A military-launched probe successfully landed there, but was damaged by an alien lifeform, resulting in a cascading backlash of energy that threatens to consume Earth in a black hole-like vortex. Slade and his crew must find the probe and stop the vortex before Earth ceases to exist.

When Slade arrives on the alien planet, he finds himself sans crew and gear, and surrounded by locals who worship him as the prophesized “Ulukai,” a being who will save their world, Adelpha, from the militaristic tyrant Fae Rhan. Slade appears unfazed by this development and pretty blasé about the whole “parallel universe” thing in general (which becomes a running gag). He’s more pissed that the locals, a species called Talons, stole his weapons because they considered them sacred artifacts.

Before he can locate the probe, Slade needs to traverse the world’s regions, helping Talons and learning more about what became of his crew as he searches for Mons, sacred relics that hold the secret to overthrowing Fae Rhan. But Slade quickly discovers that things on Adelpha aren’t quite what they seem. I’d go into more detail, but it’d risk spoiler territory – if that even exists with a game that’s nearly old enough to drink. 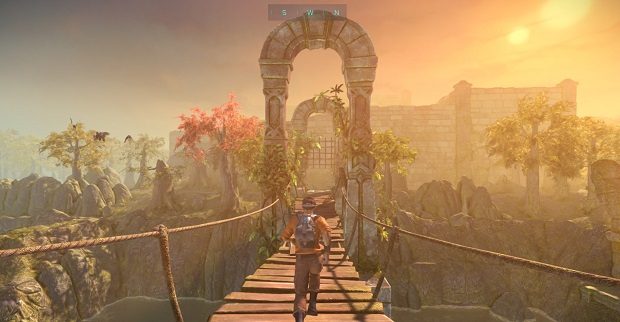 Outcast’s open-world environments were a marvel back in 1999, and the remake’s improved graphics are strong enough that Adelpha looks just fine alongside other modern open-world games. The world’s regions are as diverse as they are beautiful. You begin your journey in Ranzaar, a snowy village tucked away in the mountains that could have been plucked straight out of Skyrim. Lush jungles overrun the region of Okaar, while a vast expanse of desert surrounds the adobe hub city of Talanzaar. Then there’s the maze of paddies and rivers that comprise the farming region, the volcanic mountains of the Motazaar region, and the water region’s city of fishermen, surrounded by a bayou lush with plant and animal life, both of which want to devour you. Each region felt like a fully fleshed-out world within itself.

While these areas aren’t small by any means, optical tricks help them appear even bigger – a holdover from the original, I’ve no doubt, when such illusions were necessary given the technological limitations. Barriers like quick sand, mud, and carnivore-infested waters prevent you from exploring beyond designated areas, though it looks like the environments expand to the horizon.

Portals called doakas (in case you haven’t noticed yet, this game has a dictionary’s worth of lexicon) let you travel between these regions and pursue quests in whatever order you wish. However, local NPCs are very vocal about their concerns if they think you’re too inexperienced to be in a certain place.

Despite the obvious effort that went into updating the look of Outcast, Appeal’s choice to use the original’s source code in this remake became painfully apparent the moment I began to walk around. 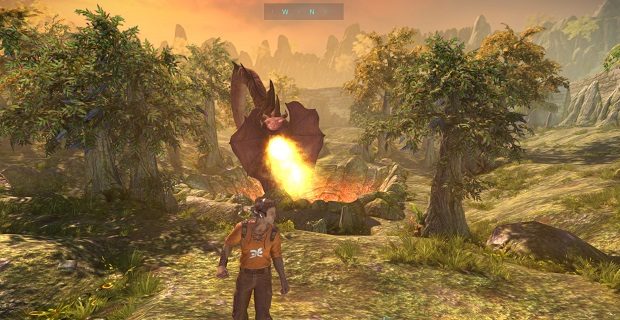 Slade’s jerky movements and the infuriatingly imprecise controls feel like a throwback in a way that I don’t think the developers intended. Anything involving jumping was a gamble, as Slade’s animation always seems to begin a few seconds after the command. Sprinting, too, is senselessly complicated by a tuck-and-roll feature. Tapping left or right while running sends you diving to the side instead of turning you in that direction. This is particularly annoying during firefights in tight quarters, when an accidental roll would send you plummeting off the side of a platform to your death. Oh, and one lovely “feature” I found: if you saved near a ledge, you had a pretty good chance of Slade diving off unprompted once you loaded the file. So. Much. Fun.

Hit boxes are another problem, making firefights less enjoyable than they might be. Chest-high barrels magically blocked head shots on a near constant basis, and don’t dare think about trying to fire between two objects if they’re even remotely close together. I found it easier, or at least less frustrating, to charge into open space during firefights; even if I had to half dance, half zigzag between enemy bullets, at least my shots had a chance of hitting the target.

But these unreliable mechanics came to a head in one of the game’s few boss fights. While facing a gorgor, a giant dinosaur-like monster ten times Slade’s size, I found its insta-kill charging attack would hit regardless if I was in the creature’s path or not. Curious, I experimented to see at what maximum distance from the gorgor would Slade’s death animation still trigger. I stopped trying at about 20 feet.

Despite all this, the combat has much to recommend it and that’s largely thanks to the sheer size and variety of Slade’s arsenal. Ruminating over the many ways I could take out a group of enemies felt a little like playing Assassin’s Creed, which is amazing considering this combat system predates Ubisoft’s series by a decade. 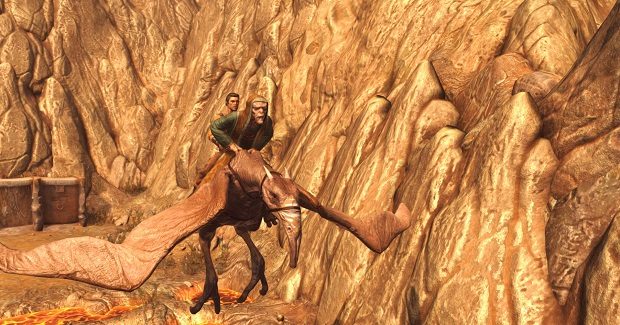 Will you take the stealthy approach, sneaking into an enemy camp and planting explosives at their feet? Or maybe you’d prefer to snipe them with sleeping gas and carry out the finishing blow up close and personal? Personally, I found the flamethrower and mine launcher delivered the most powerful (and satisfying) chain of destruction, especially among large groups of enemies. And whenever low health became an issue, a transporter placed outside of the fight can zip you to safety instantly.

Unfortunately, the game’s lengthy tutorial doesn’t teach you how to use much of your arsenal. And while I appreciated the slick user interface, it was simplified to a fault. Items in your inventory lack descriptions, and with gadgets sporting names like CLAPR-T and PPS, discovering their purpose required trial and error.

Some of the best battles weave periods of platforming into the mix, which is a refreshing change of pace. My favorite involved a partially sunken prison where, after swimming inside, the only ground is surrounded on all sides by enemy guards. To find cover, you have to leap over barrels across a series of platforms that span the length of the prison, dodging energy beams and praying that Slade will jump when you tell him too.

While parts of Outcast – Second Contact’s do seem dated, good dialogue is ageless. As a first time player, I found Slade’s nonchalant attitude in the face of an alien civilization hilarious. At one point, he grills a Talon about where all the female Talons are, resulting in an interesting bit of lore about Talon mating seasons, though this unlucky guy had never participated in one. 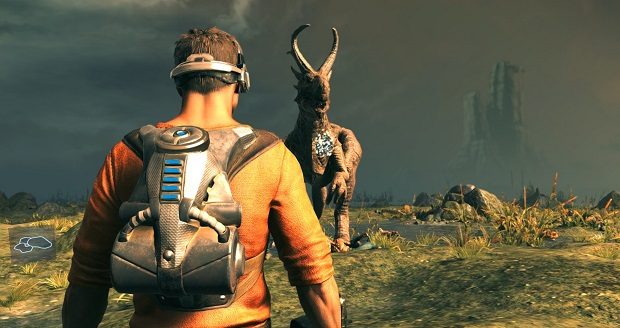 Slade’s attitude makes a pleasant change from super-serious space adventures. Sadly, there are few NPCs with unique dialogue options;despite there being many buildings and homes, few contain anything of interest, and though Talons flood the streets, many look and sound identical.
The story can be similarly sparse at times, relying too heavily on action movie clichés, but it’s saved by a few genuine curveballs and the characters’ occasional brushes with sincerity. As much as I loved Slade’s quips, it’s when he recognises the gravity of his mission that he reveals some depth. At one point, reminiscing about Earth, he delivers my favourite line in the game: “Right now, there’s about five billion people praying to a thousand different Gods. I don’t want to disappoint them.”

I wish Outcast spent more time giving its characters space to breath, but the bulk of the plot progresses through thinly disguised fetch quests instead of any meaningful development. Yes, there are hundreds of quests, but when most involve crisscrossing regions, hunting down NPC after NPC just to be directed to another NPC, the impetus to complete them withers away.

Some regions camouflage the fetch quests better than others. Puzzles that require inter-regional cooperation and shooting battles interspersed with platforming successfully break up the monotony and jump-start the game’s pace.

Even when the quests aree uninspired, completing them affects the world dramatically. Each region contributes its resources to Fae Rhan’s army, and each region’s leader can be convinced to pull this support if you finish certain tasks and sway enough Talons onto your side. You can put pressure on the army’s forces, arsenal, or food supply in this way, which decreases the difficulty of combat throughout all regions. Completing three out of the four of these opportunities weakened enemies to the point that combat was a breeze (I was playing on normal difficulty), but I’d be interested to see how this changes the game on harder modes.

In another twist, the number of Talons you help throughout the game – remember those hundreds of fetch quests I mentioned? – ultimately affects your supplies in the final battle. It reminded me of Telltale’s signature “They will remember that,” and I’d love to see more games incorporate this kind of cumulative karma mechanic, though hopefully with more engaging quests.

Fans of the original may well love seeing Adelpha modernised. For a newcomer like me though, while it's impossible to ignore the foundations that Outcast laid for later games in the open-world genre, at its core, Second Contact is clunky. Infuriatingly imprecise combat and stiff controls constantly jerk you cursing back into reality.

Despite that, Adelpha’s diverse environments still prove every bit as enjoyable to explore as those in a modern release. And Slade, daft name and all, is a bright spot, managing to straddle that precarious line between annoyingly cocky and charming, like a proto Nathan Drake. The variety of his arsenal can make combat entertaining if you stick around long enough to master it, but the game almost dares you not to. With how difficult it is to both a) learn all the mechanics and b) execute actions with Slade’s lumbering movement, it’s tempting just to move on, and to leave Outcast in the past.

Outcast - Second Contact is available now for Windows, via Steam for £25.49.