"We're doing an 8chan AMA and we have no idea why," announced THQ Nordic on their Twitter account earlier this evening. If you're not aware, 8chan is an imageboard website which has been de-listed from Google search results for hosting "suspected child abuse content," and which is associated with Swatting and Gamergate.

THQ Nordic's marketing director has since apologised and claimed ignorance, but both are hard to believe.

Thirty minutes after the original tweet, a brief followup attempted to offer more context for the decision: "the opportunity was here and we took it, we got apporached [sic] in a very friendly and polite manner and were assured, said person (shoutout to Mark) will take care of the nasty stuff. so, here we are." 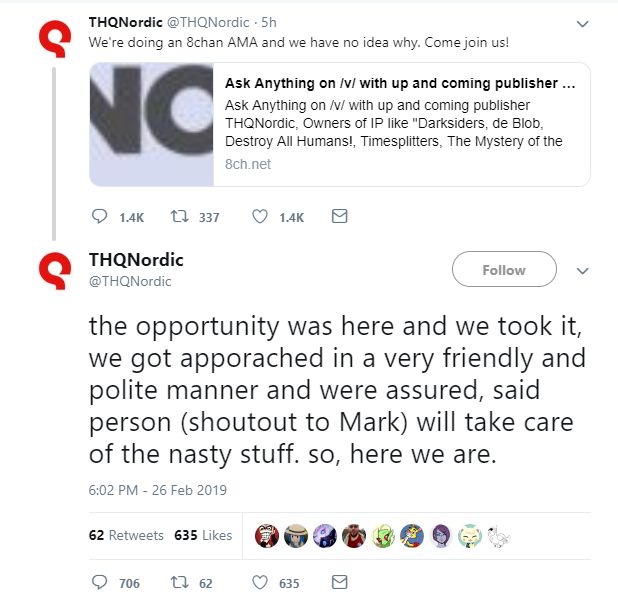 Two hours later and following a flood of negative reactions on Twitter, THQ Nordic posted a multi-tweet follow-up: "I personally agreed to this AMA without doing my proper due diligence to understand the history and the controversy of the site. I do not condone child pornography, white supremacy, or racism in any shape or form. I am terribly sorry for the short-sightedness of my (!) decision, and promise to be far more vigorous in my assessment of these activities in the future. This was not about being edgy, this blew up and I very much regret to have done it in the first place. Philipp Brock, PR & Marketing Director THQ Nordic GmbH (Vienna, Austria)".

8chan isn't new or obscure. In 2015, the Washington Post referred to it as "the more-lawless, more-libertarian, more 'free' follow-up to 4chan." QAnon, the infamous conspiracy group, grew in part from 8chan. Even a single Google search would have returned news stories giving a sense of what 8chan is - and, as mentioned above, would not have returned any links to 8chan. Also, it's not as if every other company and brand is whoops-a-daisy accidentally doing interviews with hate sites, is it?

Even if the people involved at THQ Nordic had not heard of 8chan previously, the QA itself was not great. As pointed out by Waypoint's Patrick Klepek, one anonymous user posted, "Please don't censor any games nor appeal to the SocJus crowd, you guys are doing fine as is". Brock responded, "thanks! we'll try to stay that way." When a user posted "Where the big tiddie lolis at?" alongside manga art depicting a man groping two young-looking girls, Brock responded, "you got them already we'd say." If Brock or business and product development director Reinhard Pollice, who also took part, was surprised by these kinds of questions, or if there was a moment when the penny dropped, it's not apparent from their posts.

THQ Nordic have been in the news a lot over the past six months, each time for buying studios or intellectual property. In the last six months they've bought TimeSplitters from Crytek, the Kingdoms Of Amalur IP, Alone In The Dark and Act Of War, Carmageddon, Outcast, plus Bugbear Entertainment and Coffee Stain Studios, the makers of Wreckfest and Goat Simulator (and the upcoming Satisfactory) respectively. Prior to all of this, they bought the THQ name when that publisher went bankrupt. This is a lot of developers to now be associated with 8chan and child pornography.

Ignorance is not a defence, even if it's true, and a hasty apology in the face of widespread condemnation does not make this OK. What are we even doing here.