If you’ve played one of Overwatch’s lore PvE events, you probably know what to expect from the bulk of the new stuff that’s unique in Overwatch 2. The mostly-sequel format of its release means that a cleaner UI, new heroes, and a new map type will be added to the first game at the same time that the sequel launches, leaving a new look for some of the characters and this focus on story-based missions as the incentive to hand over your cash.

When Overwatch released three and a half years ago, it was that story that captured the imagination of many fans. A slowly drip fed tale of a ragtag bunch of (at least somewhat) diverse heroes battling over evil left a thousand gaps that dedicated artists and fanfic writers poured themselves into, growing a fandom few other pieces of media could match. But this same fandom was also its most vocal critic, discussing Blizzard’s repeated missteps, particularly over their promised inclusivity. I should know - it’s how I got into games writing.

After all that time, Overwatch 2 should be a blessing for that community, finally pushing the story forward. But from the earliest moments, like Widowmaker’s inexplicably boobs-out design, to their latest hero Sigma’s careless treatment of mental health, to their continued exclusion of black women, the consistent carelessness has more than worn the sheen of the promise off for many. Tied by necessity to that foundation, a story-based sequel feels hobbled from the start. Worse, it doesn't seem interested in improving.

Editor's note: Game announcements obviously aren't the only thing happening at Blizzcon this year. We've got coverage of the protests to come, but in the meantime you can read our previous coverage on Blizzard's on-stage apology and previous statement.

Here at Blizzcon I got my hands on a mission set in Rio de Janeiro, featuring Lúcio, Tracer, Reinhardt, and Mei. It’s longer than any previous similar mission from an event mode, but other than that the idea is basically the same. You work cooperatively to shoot at a whole lot of robots, resurrecting anyone who goes down. If you all die, you’ll have to start over from an earlier checkpoint, and you get a certain amount of tries. Each mission begins and ends with a lore cutscene, which should all tie together to finally flesh out Overwatch’s world.

The new UI is slick, and there are a few new tricks up the gameplay sleeve, like crates that drop new abilities - turrets, health, grenades and the like to help you through future sections. But the story is an old one. Robots, or omnics, have gone berserk and are killing civilians, and it’s your job to kill them first. 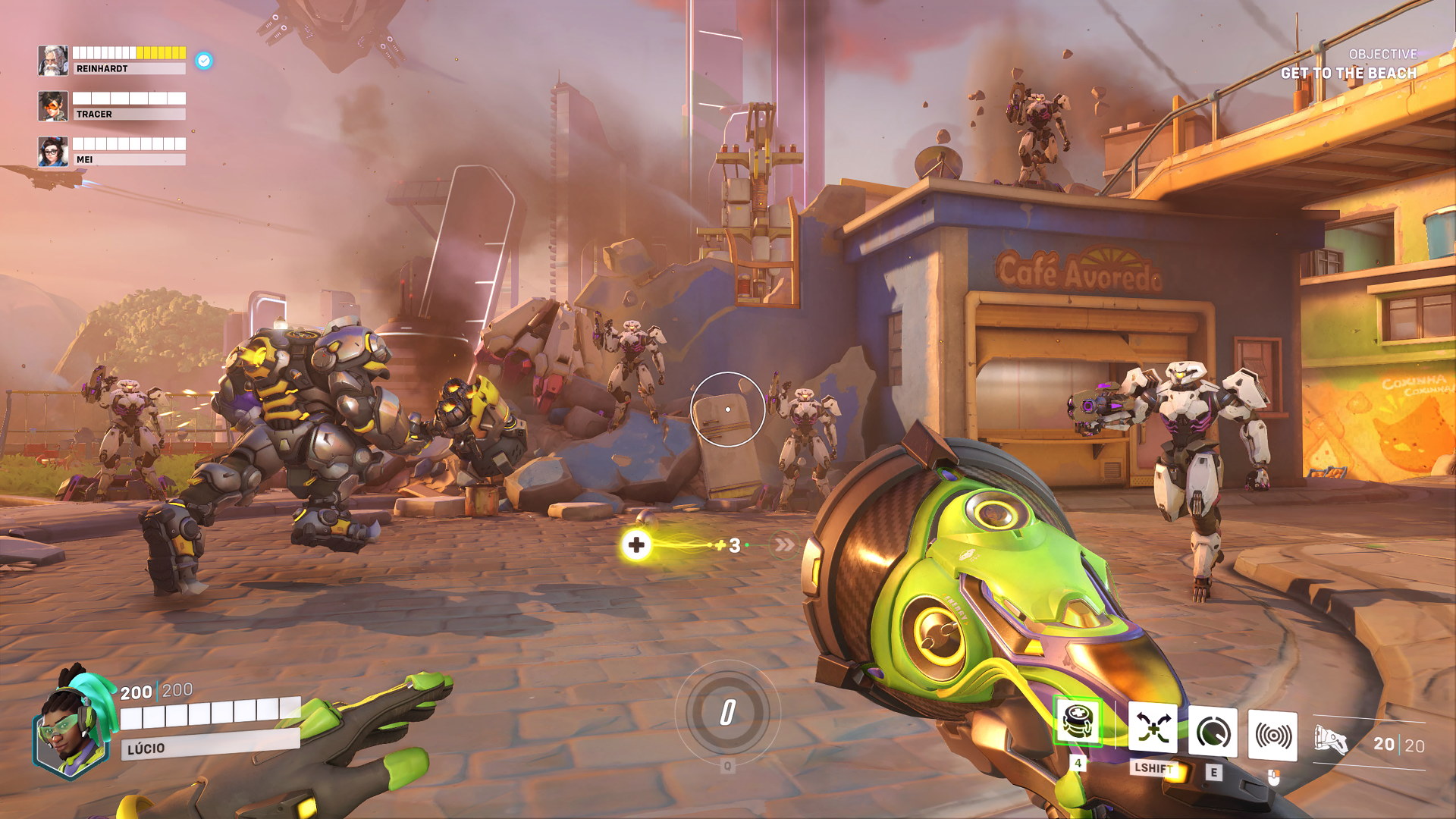 There’s nothing wrong with that inherently, but original Overwatch (Over1tch?) constructed a racism allegory out of the omnics, positioning them as an oppressed class. It never really worked thanks to the lore of the earlier “uprising,” where the robots once tried to kill off humanity. Giving the world’s humans a pretty good reason to dislike your stand in for a discriminated-against part of society makes the real world parallels fall apart; having the prejudiced be right about how dangerous the downtrodden were and requiring the player to kill them all reverses the message entirely.

Part of Rio de Janeiro’s map looks similar to the Overwatch 1 map Dorado, with colourful houses stacked up on a mountainside. This famously came about because the developers searched for a Mexican town, and didn’t realise the image they were looking at was actually Italy. I’m not sure why the same vibe carries over to their second Latin American map.

Overwatch 2 will finally add a black woman, Sojourn. But (unless another is added to the original before 2's launch) taking until a whole new game isn't likely to appease the many who have been asking for years, and worse, she's backseated at this year's Blizzcon to the inexplicably curvy robot Echo who flies the ship in the Rio mission. It should have been a slam dunk to confirm one of the most often requested bits of representation in the game's history, but it still hasn't been prioritised and so we don't know anything but her face.

I could go on, but there’s also always the mess that is Blizzard’s last month in the front of the mind too, of course. Early in the demo, Lúcio says something along the lines of “Heroes don’t do what politicians tell them to do!” It’s a very Overwatch message: rebellious for good. It also sounds ridiculously hollow compared with the clear clash clash with Blizzard’s own choices to put money over morality.

Nothing I’ve seen suggests that Overwatch 2 has learned from its predecessor’s mistakes. I asked story and franchise developer Lydia Bottegoni whether they had any specific story improvements in mind, and she said that Overwatch 2 wasn’t “an improvement so much as a new way to engage with the game.” 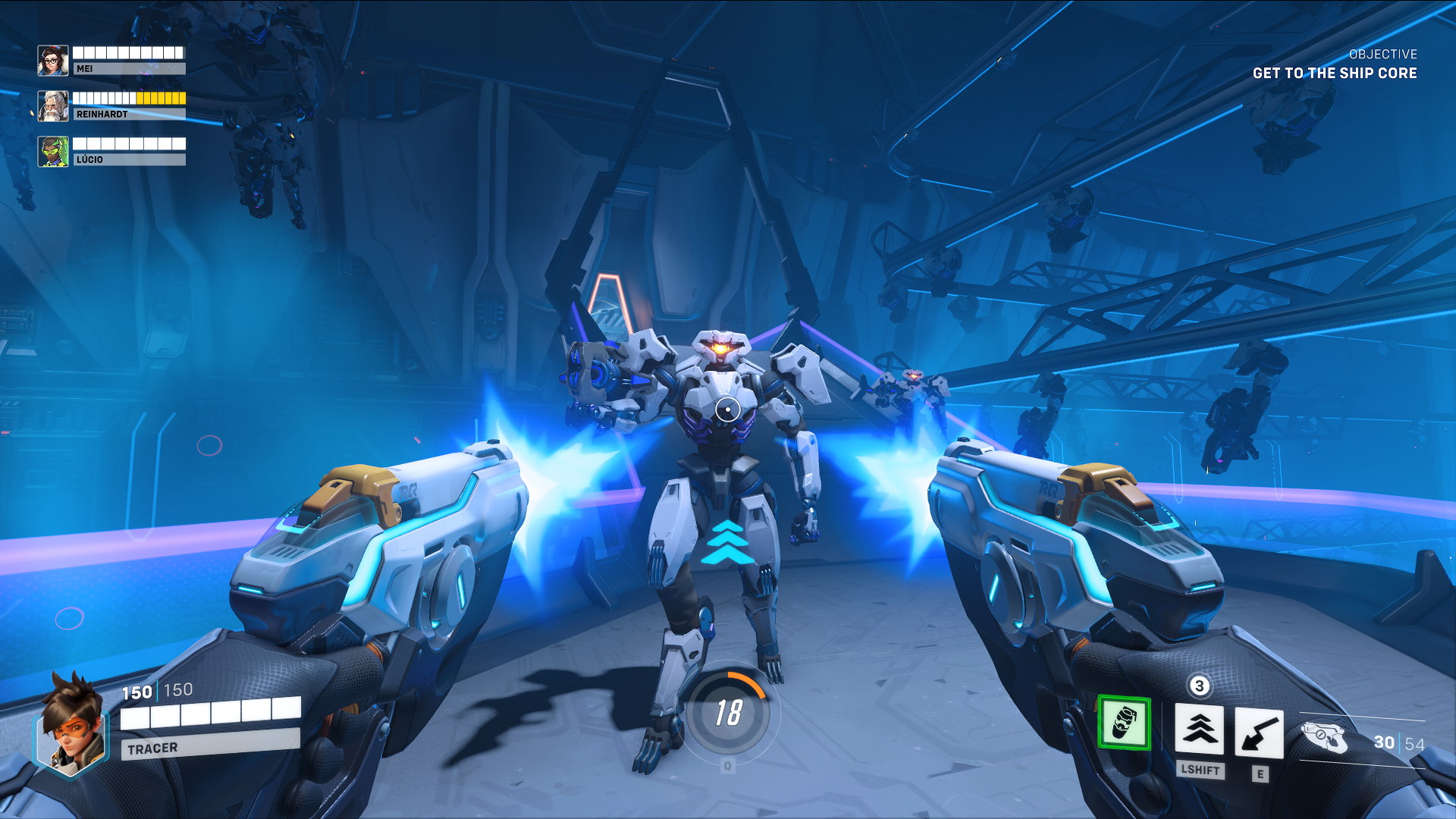 But it was Kaplan who put it plainest. ““PvP is the core of the game. PvP is the most important thing for us to get right. If we get no part of Overwatch 2 right but PvP, we will definitely be serving that audience... we have right now who are playing for that reason.”

There will certainly be many people who love the PvP upgrades to Overwatch and Overwatch 2 (though if they're only playing for that there's not much investment to upgrade, since most of it is coming to both). But it’s not true that everyone who plays Overwatch currently is only invested in the shooting. There’s a whole rich group who have been there for the story throughout, who are oftentimes marginalised genders, people of colour, queer people. It's fine for Blizzard to have decided that their "core" audience is shooter fans, but their cinematics and talk of representation are slick advertisements for a game that has proven over three and a half years that it doesn't exist. Overwatch has never prioritised becoming that game. It would take a sharp turn for Overwatch 2 to do so, and so far, I'm not seeing it. At this point, it might be time to stop looking.