If you click on a link and make a purchase we may receive a small commission. Read our editorial policy.
Developer: Black Shamrock, Cyanide
Publisher: Bigben Interactive

A grimly cheerful dystopia is one of the most popular game settings there is, beaten only by densely populated desert wastelands. (This is why grimly cheerful dystopias in densely populated desert wastelands are a sub-genre all on their own.) It's not hard to see the appeal for developers: it’s loads of fun to write, it allows for levity in an otherwise thoroughly grimdark scenario, and it lets you demonstrate your ability to do “satire” without doing anything so uncouth as to be actually political. But it’s a fine line to walk, isn't it? For every Void Bastards turning outer space into your local job centre, there’s a Fallout making its cheesy parody of corporate mascots into a fully-fledged corporate mascot.

Paranoia: Happiness Is Mandatory is a CRPG based on a classic tabletop RPG. In the tabletop game, as in the video game, you play a clone assigned as a "Troubleshooter", making a squad of four. Each has a mutation, and a secret political affiliation. The game is about completing the tasks given to you by Friend Computer, an all powerful AI that is simultaneously a deity and a line manager, while also trying to drop the other party members in it and avoid getting caught yourself. Any attempts at satire during this fall flat. 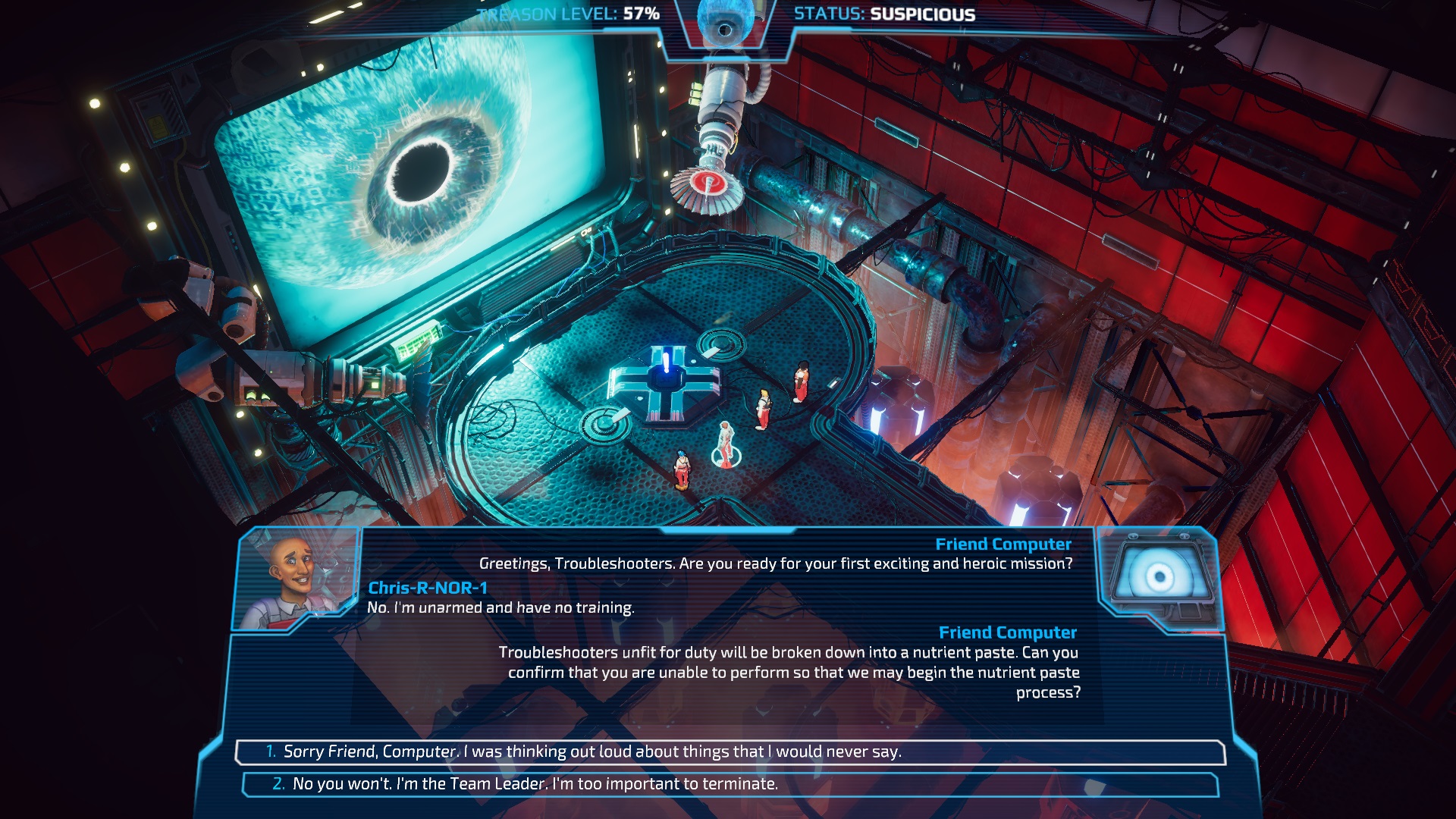 All the staples are here. There is a bureaucracy; it is incompetent. People live in a colour-coded class hierarchy where those on the level directly above you are snobs and the ones directly below you are scum. Mental health medication is a form of government subjugation. Posters feature smiling, overall-wearing mascots spouting vaguely sinister sounding slogans. Paranoia has everything but the dystopian kitchen sink. But the problem is that despite all this, the jokes aren’t really at the expense of anything - unless it's Friend Computer, but I don't think "sinister AI is being sinister" really sticks repeated landings.

Even where the game gets onto more solid ground, with LARP-themed side missions and subplots involving the in-universe World Of Troubleshooters video game, the jokes feel oddly at one remove, as if a prime-time sitcom or one of the lesser CSIs decided to do a gamer episode. 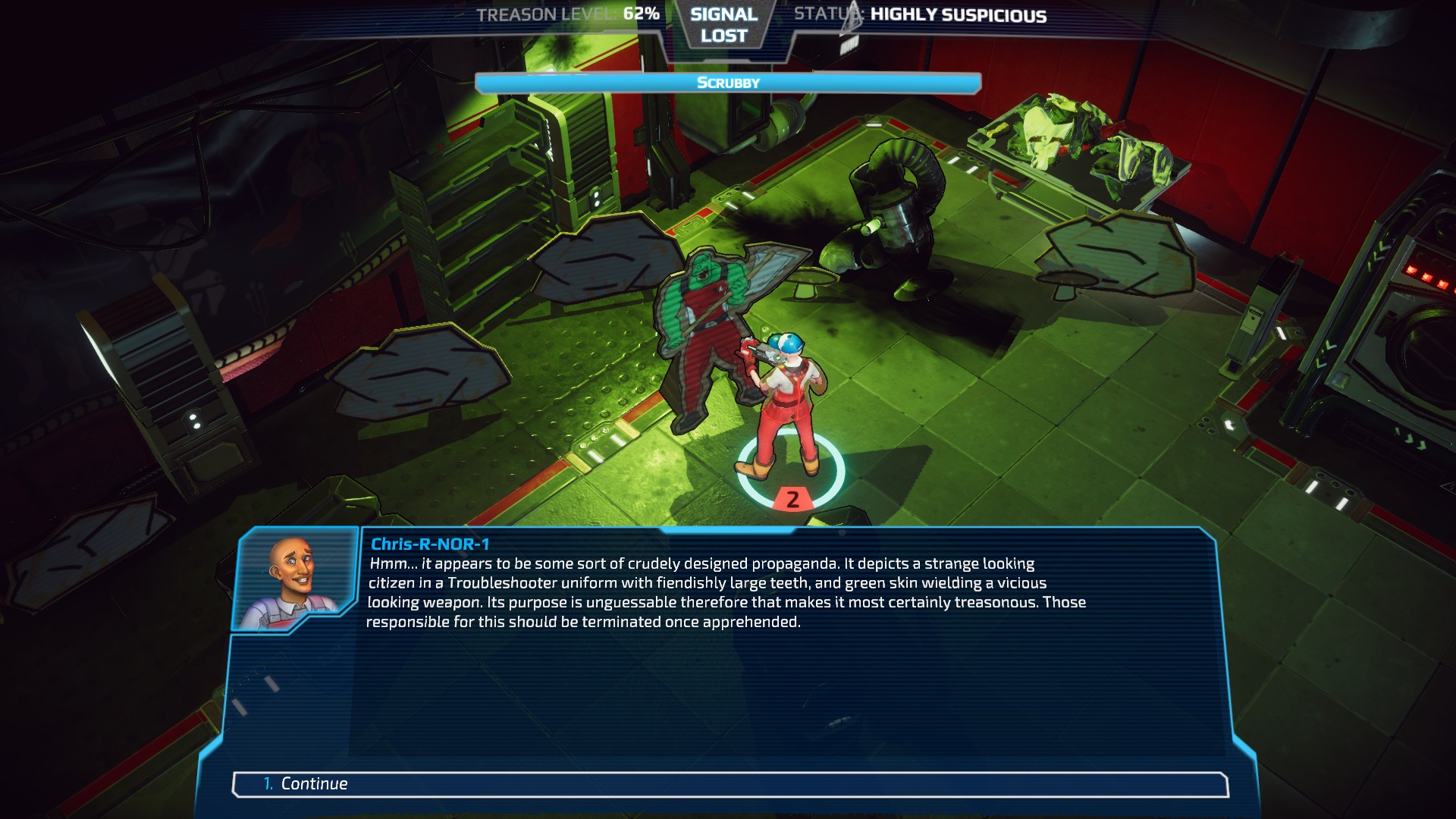 None of this is particularly damning on its own. Plenty of video games have ridden to greatness on a sleigh made of borrowed furniture, and Skyrim was a fantastic game despite having very little to say about the problems of feudalism. But the systems at its heart, the combat and the roleplaying, don't save Paranoia either. I couldn't find a lot of depth. It was mostly mouse clicks, in fact.

During missions, mostly a series of fetch quests, you control the squad and click-to-move them around levels (a particularly long journey will often be a case of waiting for the party to slowly walk where you've indicated). If there’s a door you need to go through, you know you will have to speak to three people to get it open, via limited dialogue trees that mostly amount to pressing 1 over and over again to get the next line, which does at least give the left mouse button a rest. 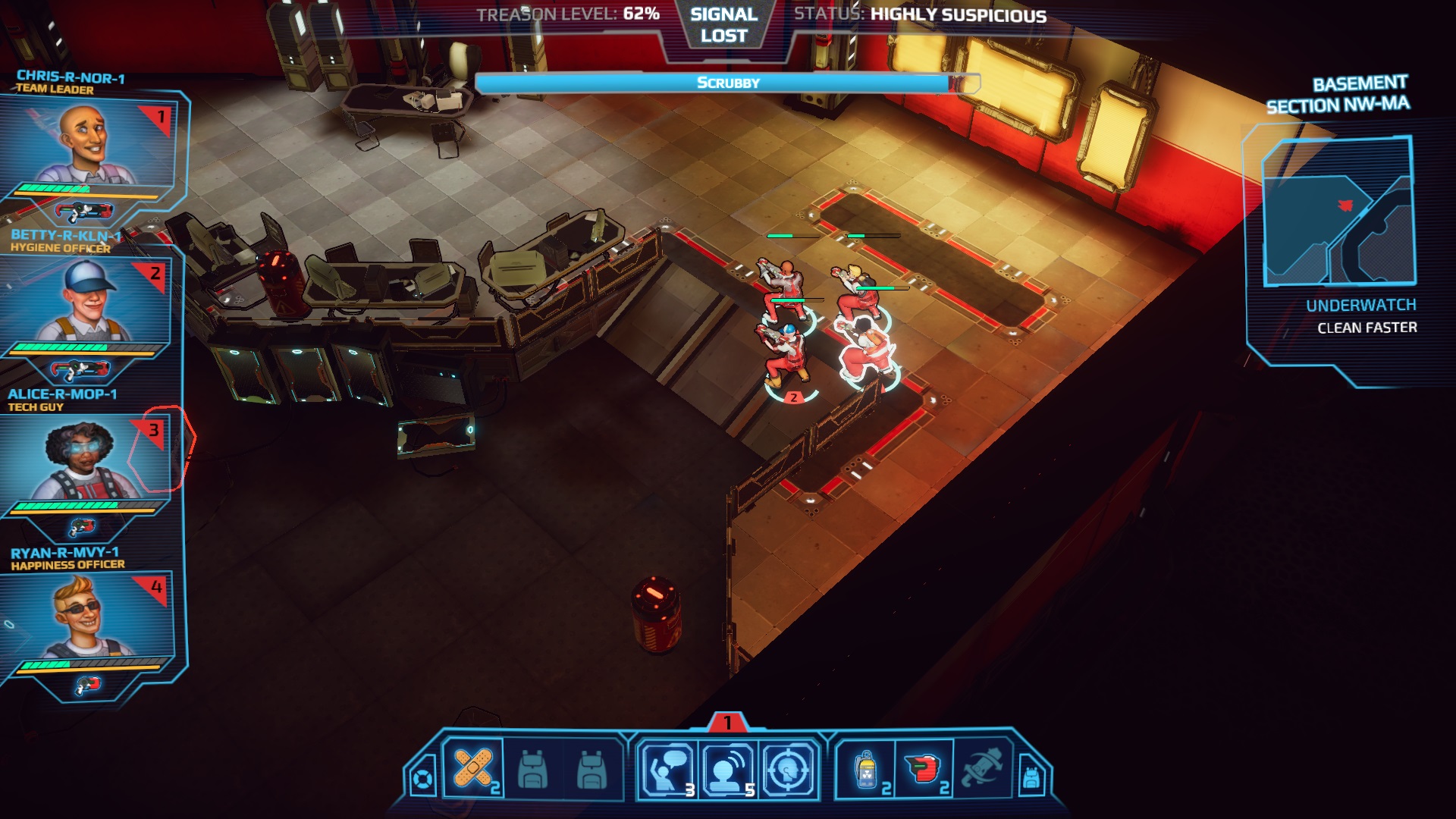 The last of these three people will need you to do a favour which probably involves fighting some robots. Combat is, despite the range of weapons and mutant powers available, also usually a question of frantically clicking at everything. Rather than using any actual tactics, you hope against hope that the robots (or sometimes human traitors) die before your party does.

Special mention must be made of the hacking minigame. I’ve completed a lot of arbitrary tasks to open doors in my time: the classic electronic maze, the less common word matching, and even those annoying sliding block puzzles you usually only see in dentist's waiting rooms. I can say without a shadow of a doubt that Paranoia features the worst hacking minigame I've encountered. Letters steadily fall, Guitar Hero style, down the screen. You have a few seconds to click the correct ones, but you have to click them at the moment the hit the bottom of the screen. If you fail - which is likely - you can't attempt it again without enough hacking nanobots, and if you need to make more you need to go hunting for scrap to make them. It is an unfulfilling and frustrating loop. 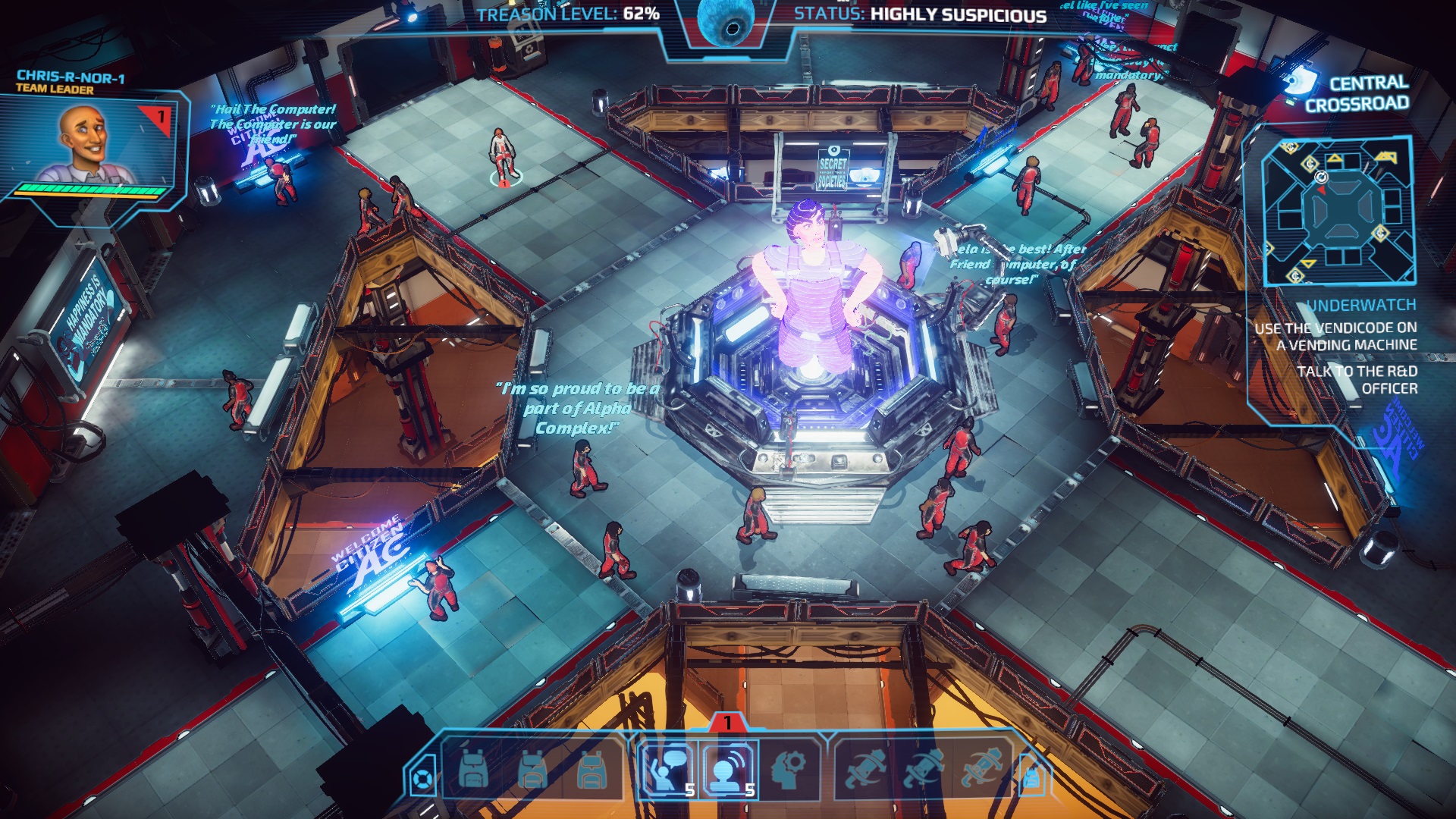 Paranoia does have some good ideas. Your character has a Treason Meter which tracks how loyal Friend Computer thinks they are. It goes up whenever you go somewhere you shouldn’t, break anything, or answer a question with anything less than enthusiasm. It's kept ticking over even if you're trying to be a goody two shoes, because most missions will require you to commit some kind of treason, whether that be hacking a door, or going into a crime scene you’ve been asked to investigate without the proper clearance.

Each mission is capped with a Prisoner’s Dilemma style scenario, where you're invited to snitch on your fellow party members’ treasons before they get a chance to snitch on yours. It’s a nice idea, but I never never actually felt the weight of snitching up a team mate to have them vaporised, or the, well, paranoia of wondering if someone was going to grass on me. 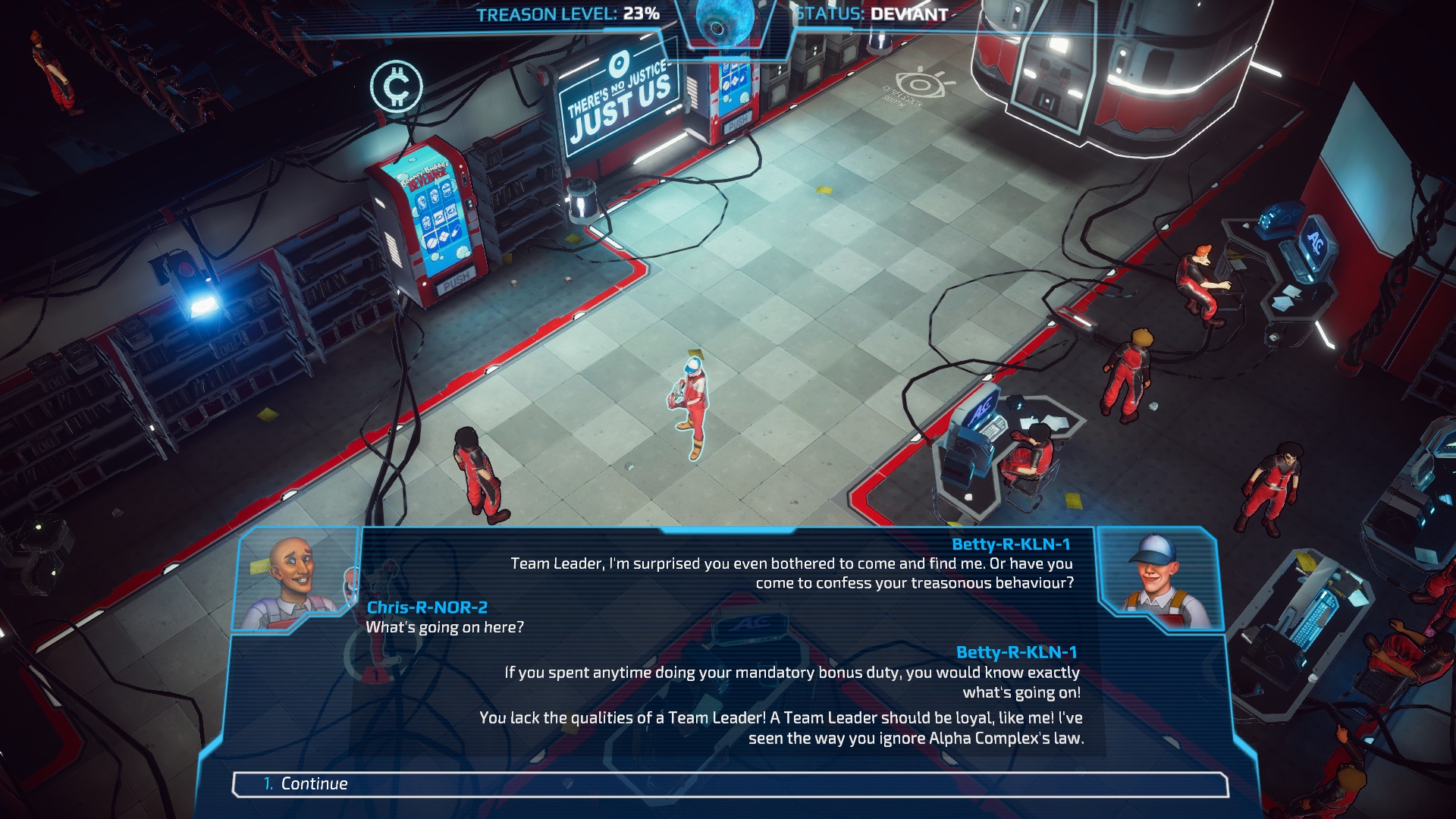 The problem, I think, is that while successfully adapted pen and paper games like Dungeons & Dragons are very rules and lore heavy, the tabletop version of Paranoia relies more heavily on multiple players engaging in creativity and improvisation. I know of a player group who all spent an hour of their tabletop session unable to leave an unlocked room. A high-ranking executive took them there, painted the door handle of the exit yellow, and left. As none of the player characters had Yellow Authorisation, they happily spent ages figuring out silly possible solutions for escape without touching the doorknob.

Paranoia is geared towards this kind of playful arguments and collaborative storytelling more than it is simulation. You can't easily replicate scenarios like the above in a video game, so to port the setting into a standard computer RPG requires... more. I do wish Paranoia: Happiness Is Mandatory had been a bit more daring in the attempt.