If you click on a link and make a purchase we may receive a small commission. Learn more.
Partisans 1941 review
Partisans 1941 is the Commandos formula put through a WW2 Soviet filter, and it's a great piece of work. It's less flashy than the similar Desperados 3, but makes up for it with a nifty base management metagame, and an immersive, Russian-written setting.

Valya, my sniper and occasional medic, kicks things off. Having chloroformed a sentry, she's now sat snug in his position, with a great view of the SS officer commanding the checkpoint. Crack - her rifle (it's our only decent one) fires, and his head bursts. On the other side of the position, Captain Zorin leaps from a bush preceded by a hurled knife, under the arc of an improvised grenade lobbed by his old mate Fetisov. The knife thuds into a forehead, while the grenade lands squarely at the feet of the man on the heavy machine gun. He has no chance of getting away in time. Neither do the other two troopers impeded by the sandbags of the gun nest.

Two more nazis do manage to leap from the blast, and cluster up with three other bewildered SS. They are just drawing their aim on Zorin, backing into cover, when a woman marches out of a door behind them. She has a stolen luger, and she is very fast. Five bullets go into five backs, and five bodies start to fall. Before they hit the cobbles, Valya fires a second shot at the penultimate survivor, and Zorin drives his spare knife into the last. I send the brigade sprinting for cover, but there's no need: the fight is over. They've just killed 12 heavily armed fascists in five seconds, and I've just fallen slightly in love with Partisans 1941.

This is, simply, a WW2 Soviet take on the Commandos series: real-time, squad-based combat with a focus on stealth, ambushes, and general skulduggery in order to overcome ludicrous odds. There are perhaps fewer bells and whistles to be found here than in the majestic Desperados 3 - the maps are less spectacular, and there are fewer environmental interactions to be had. But it's got strengths of its own, and on a mechanical level it's very similar. You move your squad about a beautifully rendered map (which is usually quite drab, but then this is war-torn Russia), either avoiding pitched battle as you meet your objectives, or stacking as many advantages in your favour as possible before engaging in it.

Fights will kill the shit out of you, mind, unless you stack those advantages high. You do have the facility of an unlimited time-slowing ability, which is how I managed to orchestrate the guerrilla ballet described above, but it never feels too much of a boon. If you've not set up a fight perfectly, you'll just get to watch your squad get beaned in slow motion, is all. 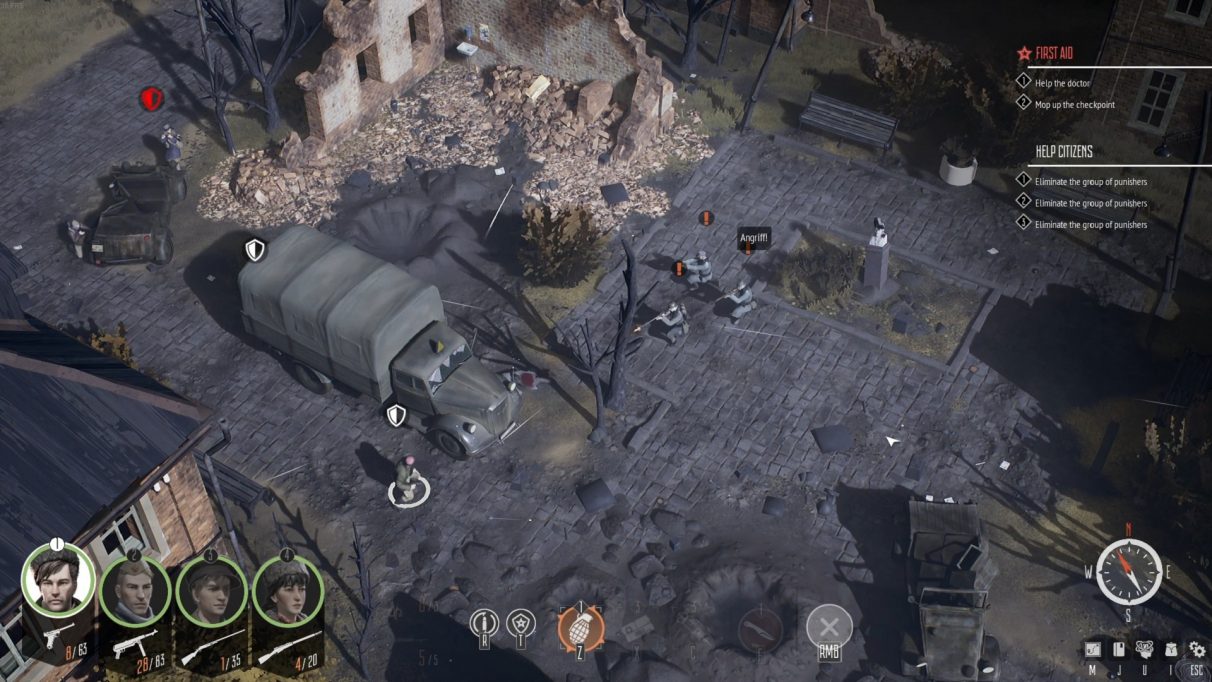 You'll get to watch that an awful lot. Because my one big problem with Partisans is my problem with the "commandos-like" subgenre in general, in that it's built around constant savescumming. Your plans will almost never work on the first, fifth or even twelfth attempt, as risky stealth manoeuvres go sideways. I don't think there's a partisan in my brigade who hasn't died a hundred times in the wild proliferation of parallel universes brought into being by the mashing of my F5 key.

It's not that frustrating, as the iterative process of developing an ambush is satisfying in itself. But it means you miss out on the interesting dilemmas that come with soldiers bearing long-term injuries, and it rather dampens both the tension and immersion somewhat to know that your ragtag band of resistance fighters is functionally immortal. 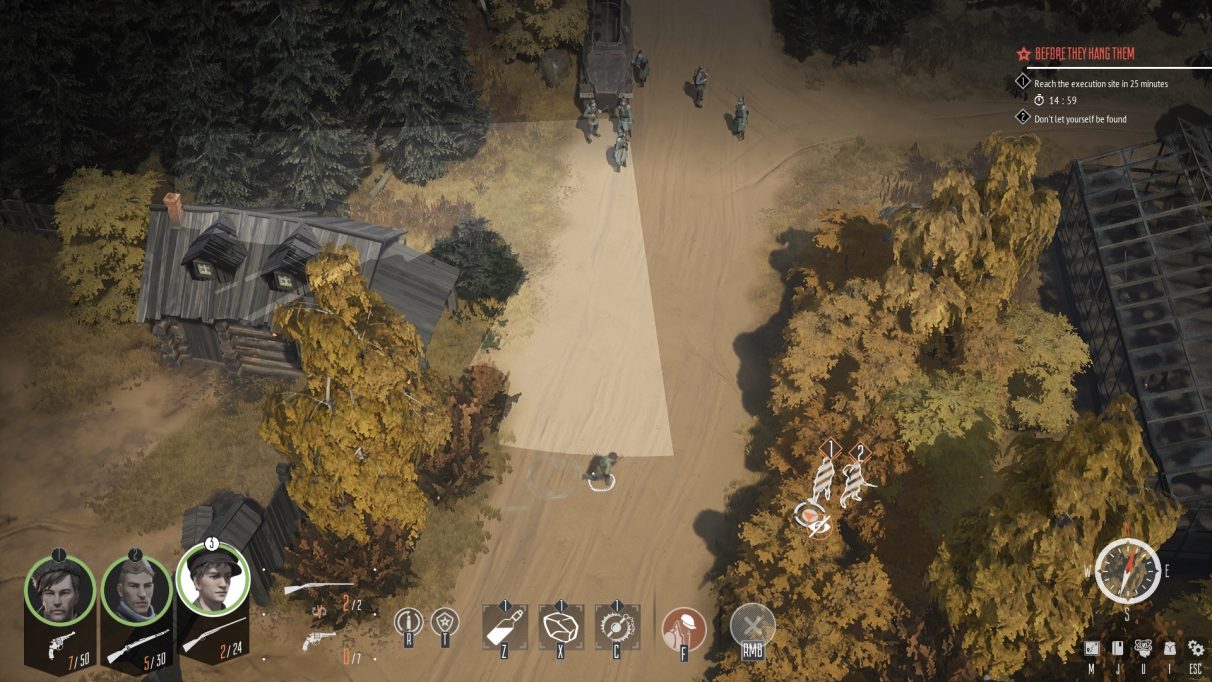 Yes, the game has a hard mode which prohibits saving. But the consequent difficulty ramp from normal is insurmountable, at least to anyone who's not coming in as a cold-blooded expert, with the precision timing skills of a robot god. Honestly, I'd be surprised if anyone could hack it, without a few completions under their belt. And yes, inevitably That One Guy in the comments will have completed it on hard mode first time, in a matter of mere hours. Well, congratulations to him. But this review is for humans. And this human, at least, will be truly impressed when a game like this manages to disincentivise savescumming, without becoming unenjoyably tough in doing so.

In stark feature terms, there's nothing too unexpected for the territory, aside from the welcome additions of simple but meaningful skill trees, and a mild management metalayer. Between missions, you play a sort of worker placement game with your partisans, as you struggle to keep them fed, healthy, and as well-equipped as is feasible, from their hideout in a Russian swamp. It's X-COM with a garden shed aesthetic, and the resource constraints are calibrated just right: risking life and limb to reach a crate, only to find it contains six bullets and a single egg, is still cause for celebration. 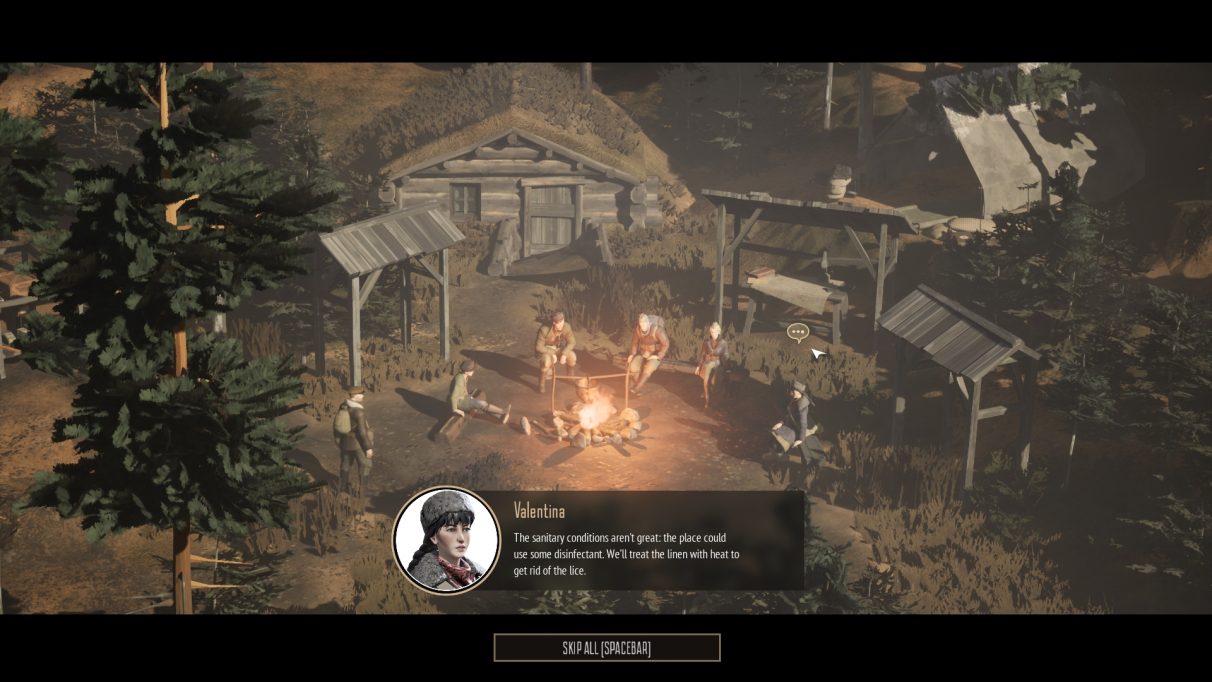 That's where the setting comes in, and - in my opinion - where the game really finds its charm. As the name suggests, you're partisans, in 1941. Russian resistance fighters, in other words, fighting a desperate losing battle against nazi occupiers from deep within their lines. You're a threadbare mob of civilians, for the most part, led by escaped POW and red army man Zorin, and you've got nothing to fight with save for what you can scavenge from the enemy. As you can imagine, then, when four of you manage to decimate a fortified Waffen SS position in seconds - and without taking a scratch in the process - you feel like an utter lord. 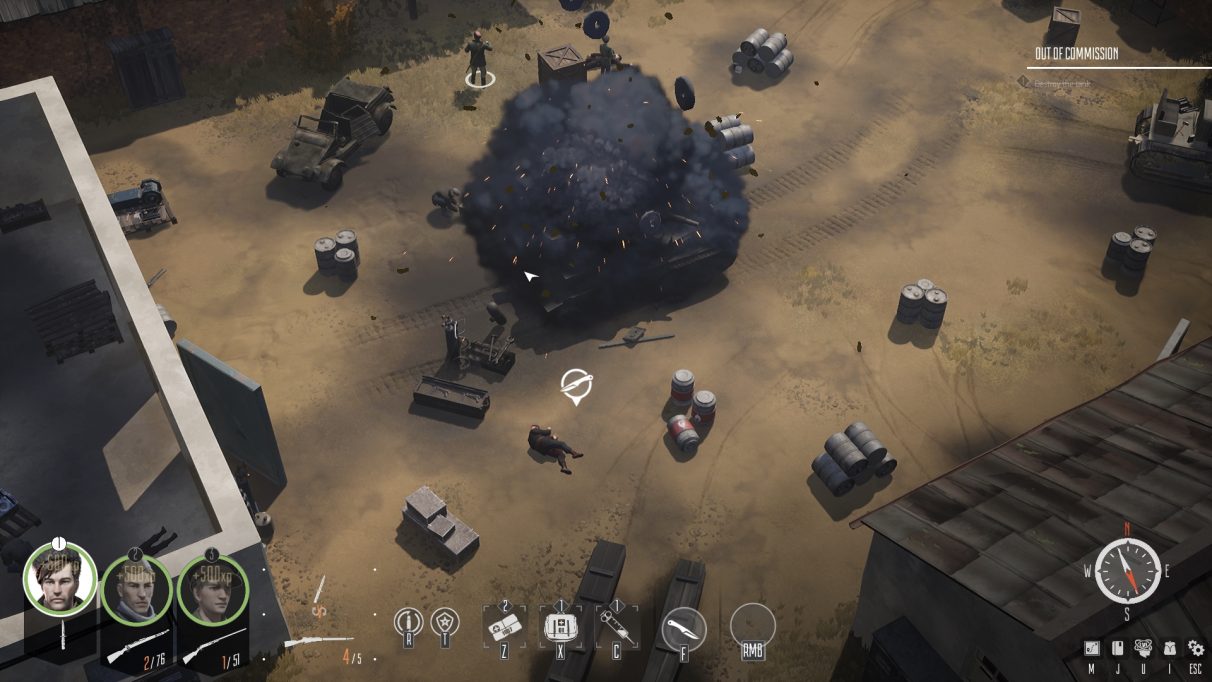 You can really feel that the game was made by Russian developers. Apart from anything else, there's constant respect paid to the guerilla fighters who actually fought back the Third Reich in 1941, without it ever feeling jingoistic. Same goes for the sober, sincere portrayal of fascist atrocities. This is a tough bit of history, but it's handled tastefully here. And educationally, for that matter, as the period detail is immense. While stealth games always wobble your suspension of disbelief a bit (can he really not see me lurking behind that bench directly in front of him?), the immersion driven by the setting here almost makes up for it. 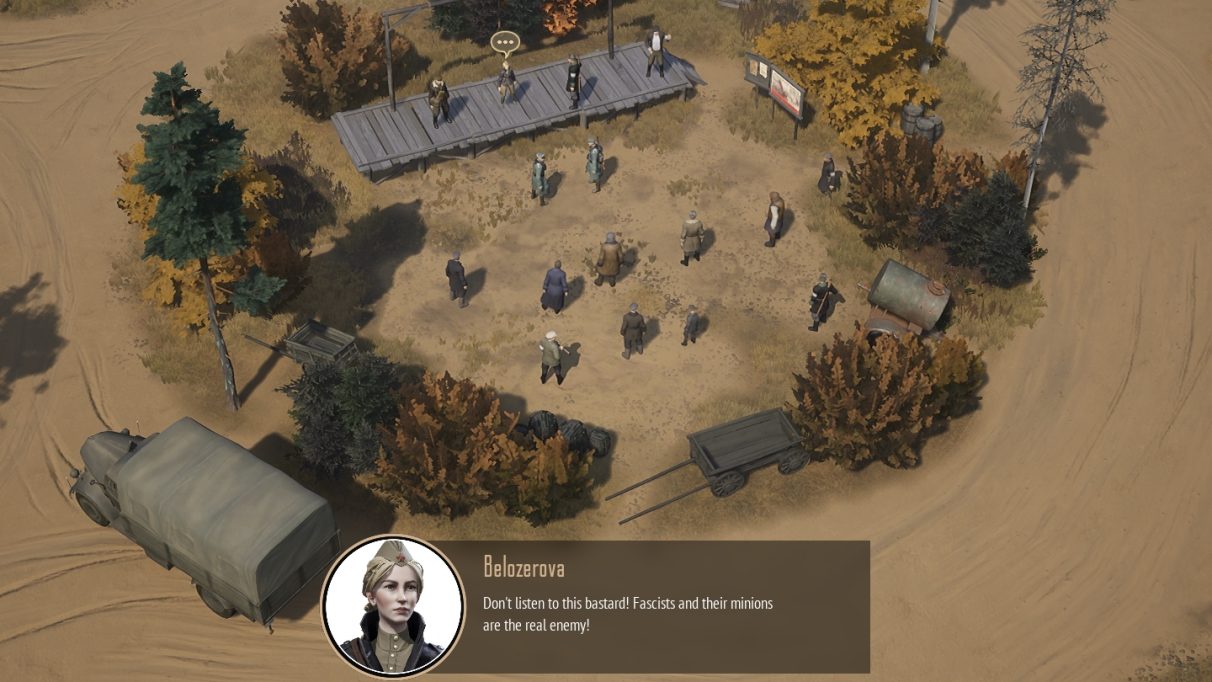 You should play it with dialogue in Russian too, not least because the English voice acting is... patchy. Zorin sounds weirdly Stathamesque, while 14-year-old Sanek sounds like someone pretending to be a little boy in a 1990s sketch show, and everyone keeps sounding Way Too Online by saying "yikes" at nazis. The characters could be more compelling, to be fair, and I found it hard to get invested in them. But then I suppose this isn't a game about individual struggles. "There's 170 million of us," snarls Zhorin to a Dhulag guard who's about to execute him at the start of the game, "you can't shoot all of us". Quite.

That story, of a vast civilian population forced into a total war footing, Partisans tells very well indeed. If you've got even a passing interest in the war on the Eastern front, or you enjoyed the various Commandos, Desperados and Shadow Tacticses of this world, I'd recommend it without hesitation. This machine kills fascists, one quicksave at a time.