If you click on a link and make a purchase we may receive a small commission. Read our editorial policy.
Pendragon review
Inkle's marriage of Arthurian storytelling and turn-based strategy is elegant and replayable - if, perhaps, a little opaque at times.

It's a relief to know that some life-or-death battles where the fate of the nation is in the balance can be attempted a near infinite number of times. A complete cycle of Inkle's turn-based strategy meets Arthurian storytelling, Pendragon, can be wrapped up pretty sharpish if you're on the lowest difficulty and aren't getting too lost on the map. From the south coast of Wales to the final battle between King Arthur and Mordred at Camlann in about 45 minutes. Then, lunch.

But this is a feature, not a bug. Pendragon is designed to be replayed many times, as many different Arthurian heroes. Indeed, I would have thrown myself back into it a lot less if it took much longer to complete my noble quest. Not that I complete it often, in the strictest sense of the word. Like, yes, I may get to Camlann, but Mordred usually beasts me because Pendragon is pretty hard.

Developers Inkle are known for games that focus on story, like 80 Days or translate 'em up Heaven's Vault, and their foray into strategy is just as stylish as their wordballing is. You control your hero (and any followers they might have picked up along the way) on a battlefield of squares. Not a neat grid, mind you - it can be a weird shape, or have holes in, be littered with obstacles, and have different terrain types. Imagine describing a chess board to a Blue Peter presenter who hadn't seen one before, and asking them to make that out of egg cartons and fake grass instead of Tracey Island.

Pendragon's rendition of that is, of course, nicer to look at than anything made out of an empty Fairy Liquid bottle. The game looks like a stained glass window, with strong black outlines and characters and monsters alike divided into key shapes in contrasting colours. I'm particularly fond of the palette on giant rats, for example, or the mix of greens on thick grass. Ruined abbeys feel echoey and melancholic, a remnant of Camelot's once-glorious past, and woods can be deep and dark and full of terrors. 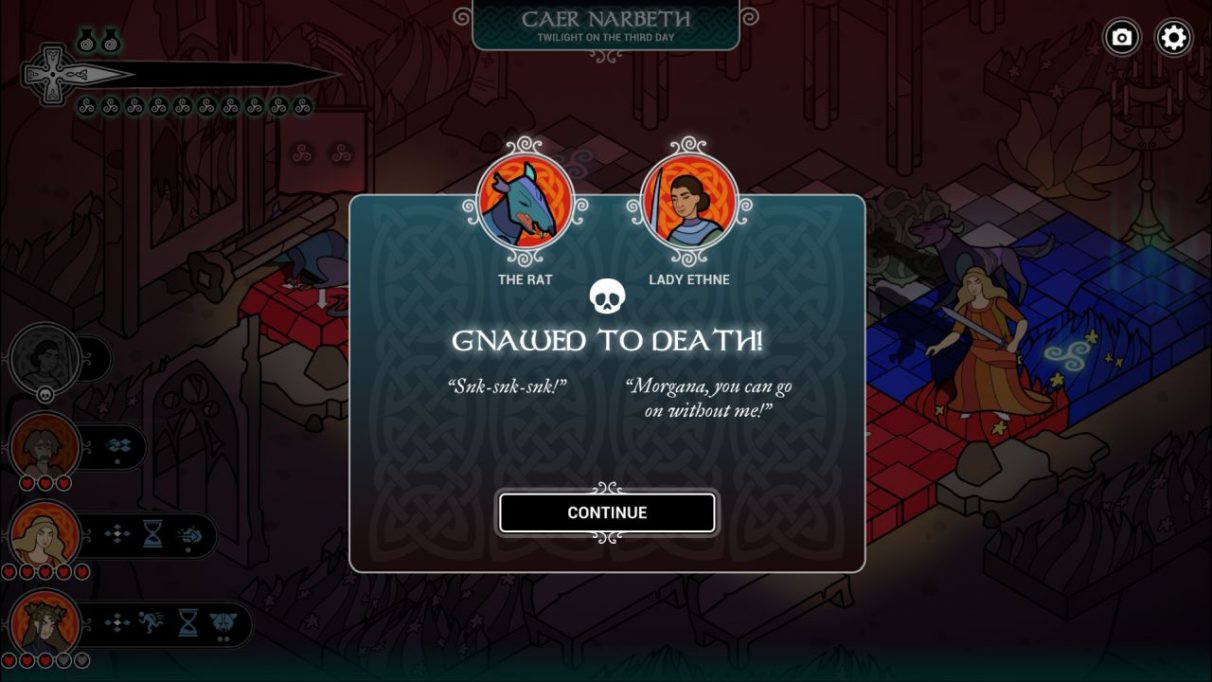 Across these varied plains you move your squad, claiming squares as you cross them. Moving in straight lines is slower, but allows you to attack anything adjacent. Changing stance to move diagonally is faster, and you claim more territory, but you can't attack - unless you've unlocked the ability to do so. New abilities come rarely, and arise from character interactions or key events, but they can change the whole flow of battle for you.

Being able to move an extra square, or attack diagonally, or to hop over an obstacle, can all save your neck in a pinch, especially since victory isn't about killing all your opponents. It only takes one hit to kill a baddie, but it also only takes one hit to kill you, so combat is actually a risky proposition. To clear a level, you have to make it to the other side of the board, so it's about movement. And it's tough! 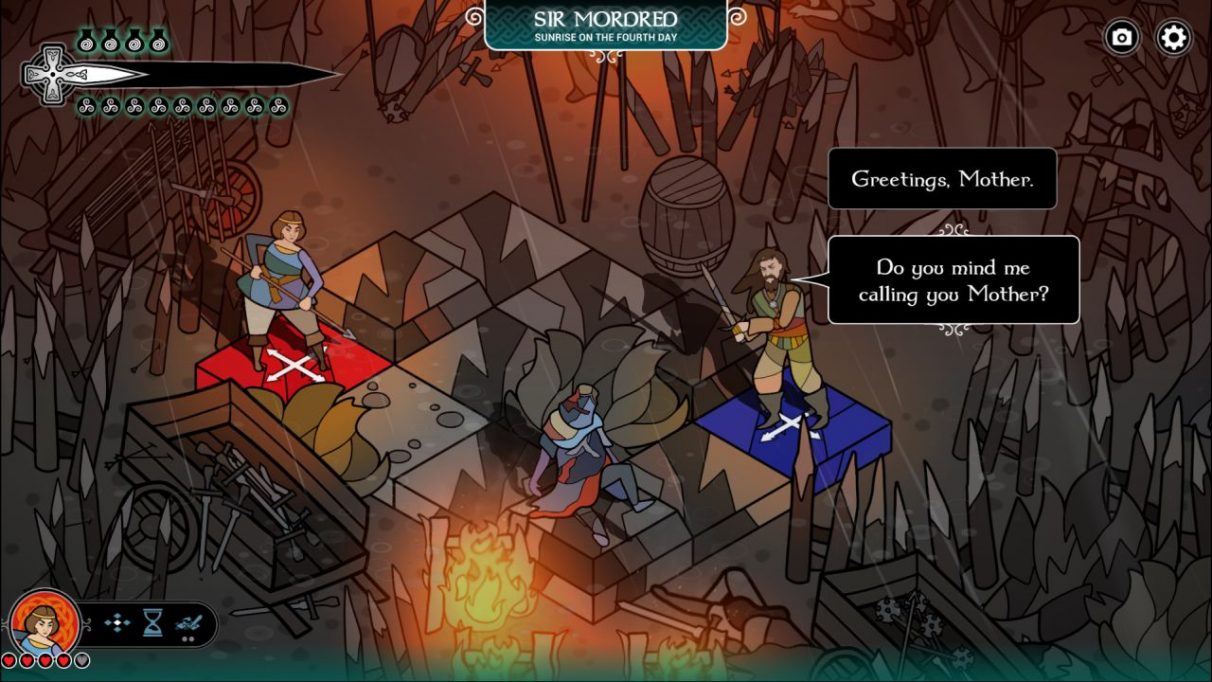 The integration of classic Inkle storytelling is good, though. You begin with just Lancelot (a jovial, blustery knightly type who would definitely say "banter" if it were a part of his vocabulary) or Guinevere to choose as your starting heroes, but you unlock more if you encounter them in the course of a quest to Camlann.

Different combinations of characters end up having different interactions. While this plays out in fireside conversations, it can also have consequences during battle. Morgana le Fay is generally a bit treacherous, so if a battle goes badly she might just bugger off and leave you. Some characters are really loyal, and will fight to the bitter end even if Guinevere has taken a hit, and will then help her up again. 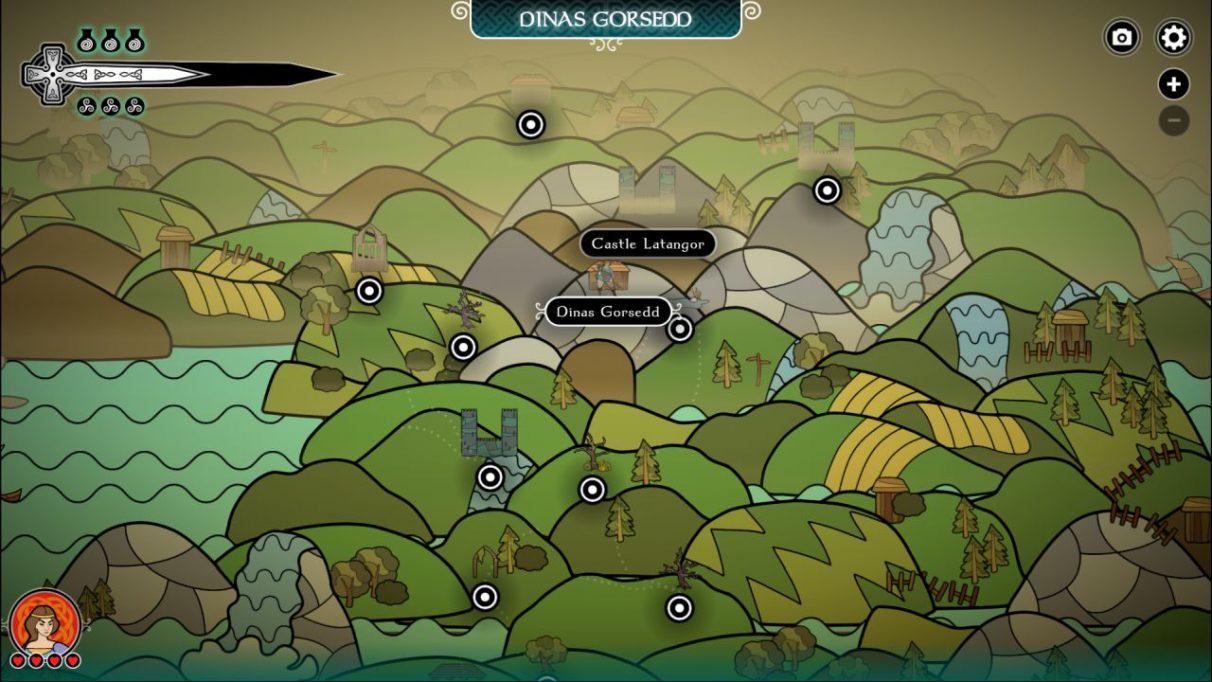 Moments like these can change the "Story" of a character, giving you those all important ability unlocks. Barely surviving an encounter by going into a kind of berserker blood rage can result in your character noting they were pushed to the edge. At the start of a playthrough with Guinevere, you are prompted to choose whether she still loves Arthur or not.

And on top of this, there are myriad encounters you can have. A village may turn out to be deserted, overrun by wolves, or holding lone survivors who'll sharpen your weapons. You might run into a trader offering a sword in exchange for food. Sometimes you might encounter... nothing at all. Phew. Although that can be a bit disappointing in its own way, because you lose out on doing your little dance of strategy. 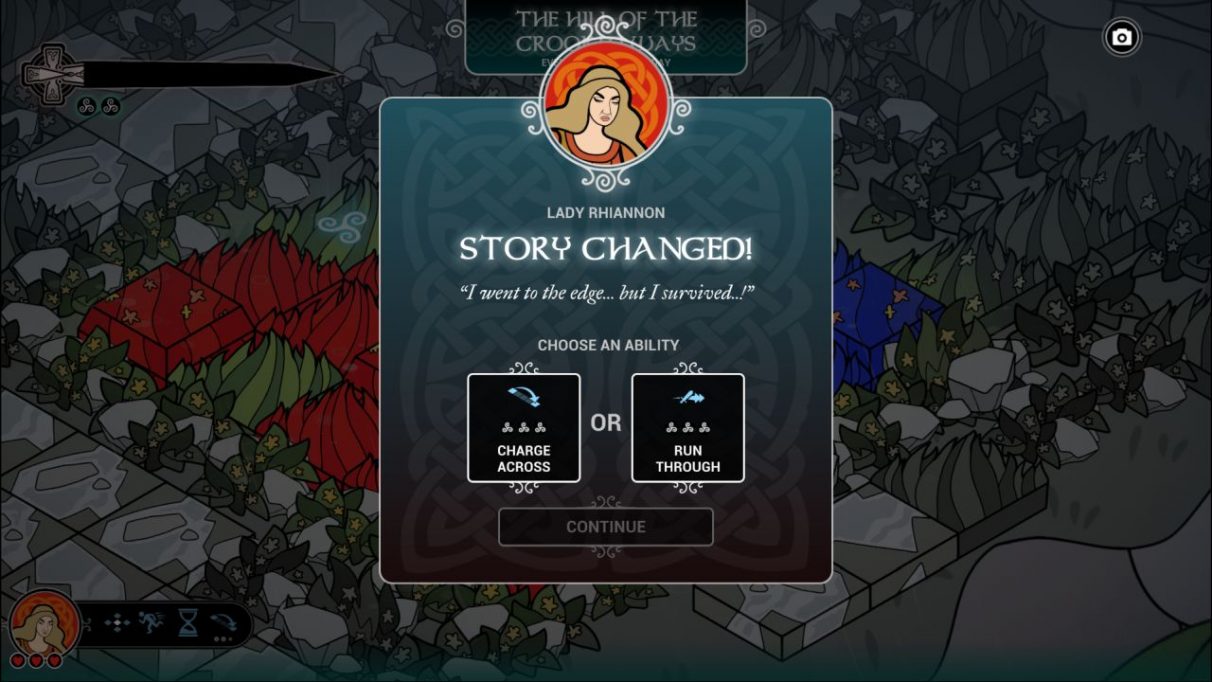 I'm still not very good at Pendragon. I can tell I'm getting better, which is satisfying. In my first ever attempt, Guinevere got a followed and then immediately left him to be eaten by spiders, before dying herself two days later. In my last run, big bad swordswoman Lady Rhiannon kicked Mordred's skinny arse. I like sensing that I am making progress, noticing that I didn't fall into the same trap I fell into last time. "I won't move there," thinks I to myself, "because Mordred's knight is on high ground, which means he will be able to attack me." You only unlock higher difficulty settings with successful goes at the quest, too, which is a nice approach to difficulty that I've not seen before.

Rather than stamina, your time in a fight is governed by morale. If you go too long without making progress across the board, you might end up having to flee entirely. I am still not, however, entirely clear on how quickly it erodes, or if retreating on the board decreases it more than holding your position. I'm not sure how I can tell whose turn it is, or if that bastard wolf is about to go next, because if it is I'm screwed. And the AI can be inscrutable as well, sometimes padding back and forth between two squares, or refusing to be drawn out.

I think the rules are still a bit too opaque for my liking. But they are, typically for Inkle, very elegant, and trust them to be the developers to weave them in with stories of knights and chivalry in such a neat way. Inkle are still better at story than strategy, though. I'll beat Mordred one day. I just suspect it will take me a long while, is the only thing.