Flashy 'gaming' monitors may be all the rage among the youth these days, but sometimes you just want a nice 27in monitor without all the bells, whistles and LED light shows that often accompany them. Fortunately, the catchily-named Philips 273V5LHAB is one such monitor, and it's about as plain and straightforward as they come.

I mean that in the best possible way, of course, and while this 27in, 60Hz TN panel does come with a few caveats - its 1920x1080 resolution being its prime flaw - even I can't argue with how much it costs. Priced at just £154, this is an absolute bargain of a big screen, and would suit most people just fine if size matters more than the number of pixels on show. Let's see if it's got the chops to break into our best gaming monitor list.

I was a bit skeptical about its image quality when I first turned it on, as initially the 273V5LHAB's brightness and contrast levels seemed completely up the spout. Everything looked washed out and had a sickly white sheen to it, but luckily things started to settle down once it had a bit of time to warm up.

Colours never reached the same kind of depth and vibrancy as my reference AOC Q2770PQU, but my calibrator still returned a very admirable result when I tested the 273V5LHAB's default User Define mode. Without making any kind of adjustments at all, the 273V5LHAB scored highly on the regular sRGB colour gamut (92.7% if you want to be precise), and a respectable contrast ratio of 1114:1 revealed plenty of detail in dark shadow areas. I even managed to push that percentage up to 94% with a couple of minor tweaks to its RGB values, which is pretty good for a TN screen when your typical IPS display normally hits around 96%. 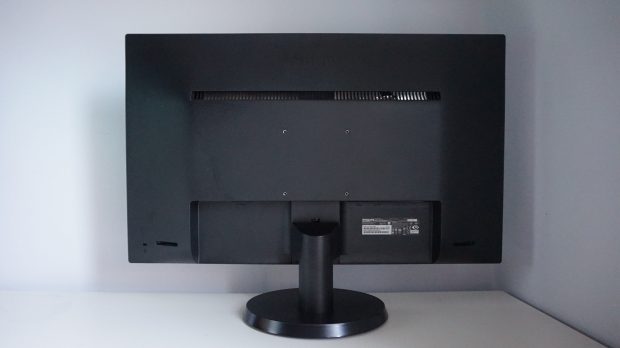 There are three other fixed colour profiles to choose from, but I wouldn't recommend them, as this made images and games appear even more washed out than User Define. Otherwise, all you've got is basic brightness and contrast controls, as well as SmartContrast and Overscan options, but I left the latter turned off and didn't feel the need to touch the former.

The only thing to bear in mind is that its peak brightness only hits around 350cd/m2, which doesn't give you a lot of leeway if you're in a room that gets a lot of direct sunlight. I also had to have the brightness turned up to full whack to get the best accuracy reading on my calibrator, so dimming the screen will cost you some extra lustre. On the whole, though, it produces a pretty great picture considering the price.

The only major problem is its resolution. I've always found 27in is just a little too big for 1920x1080, as text starts to get a bit grainy and pixellated. Word documents just about get away with it, but email clients really start to show its limitations when stretched across a screen this large, as text starts to become very hazy around the edges and difficult to read. As a general rule, I'd always recommend opting for a 2560x1440 resolution if you're buying a 27in monitor, but if you're largely going to be using it for gaming and nothing else, then it's less of a problem. 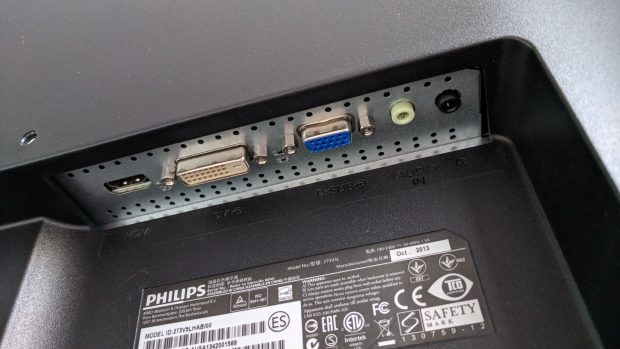 Its large size also means the 273V5LHAB needs little in the way of extra ergonomics. Its short, fixed stand offers a tiny bit of tilt up and down, but that's pretty much it. If you like your monitors sitting a bit higher on your desk, however, you'll have to find a few books to prop it up. DisplayPort fiends will also need to look elsewhere, as the 273V5LHAB only has VGA, DVI-D and HDMI inputs, plus your standard headphone and audio-in jacks.

Otherwise, though, there's a lot to like about the 273V5LHAB, despite its couple of shortcomings. The smaller AOC G2460PF still wins in terms of best value for money in this kind of price range, but if you're looking for a big screen on the cheap for less than £200, the Philips 273V5LHAB is a great place to start.