EightyEight Games have previously bought us the absolutely splendid 10,000,000 and You Must Build A Boat. Their latest release, Photographs, is a very different prospect. Gone is the match-3, and instead comes a combination of story and puzzle.

This is a collection of five narrative vignettes, each taking about half an hour to an hour to complete, telling stories both through some beautiful pixel art, and via the puzzles themselves. As a puzzle game, it's five completely different puzzle types, each growing in complexity as you progress. As a story game, these are delicate, heartfelt tales told in developing pixel drawings, scoured by a zooming camera lens for clues. 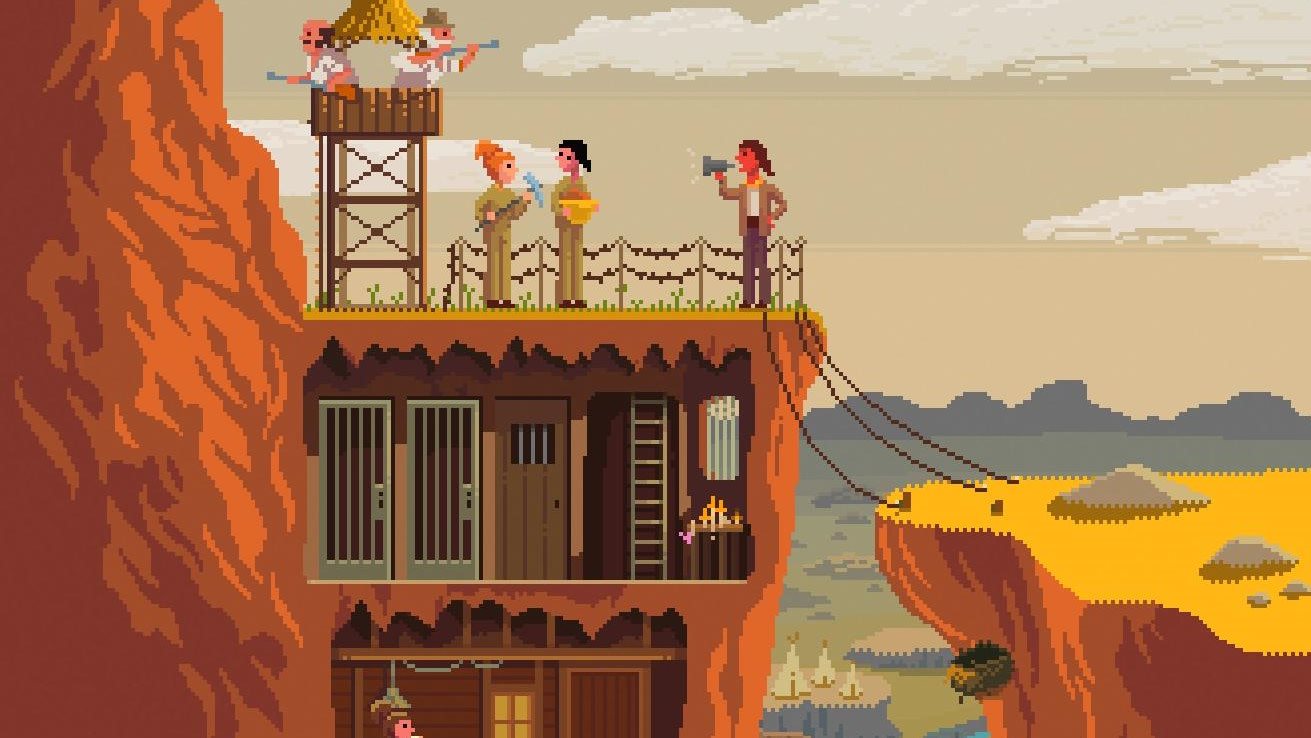 So take the first chapter, a story about what I imagine might be a grandfather raising a granddaughter, and a tragedy that befalls them. The puzzles not only provide the gate to progress, but also embody the nature of their experiences. Here you have a sokoban-like, a tiled grid, with two movable characters. Each moves at the same time, and any move sends them to the farthest extreme they can reach. You have to negotiate these rules to manoeuvre them into their marked positions. To explain these connections makes them sound far too on-the-nose, but it's important to understand that in context, the connection is extremely subtle.

When all is good in their lives, they work in tandem, their path is relatively clear. As times become more complicated, so do the challenges, including elements that require getting stuck, or avoiding dangers. When the granddaughter becomes very sick, and is unable to think clearly, her movements are the reverse of her grandfather's. As I say, in writing, it feels over-obvious, but as you play the game it's a very gentle touch. 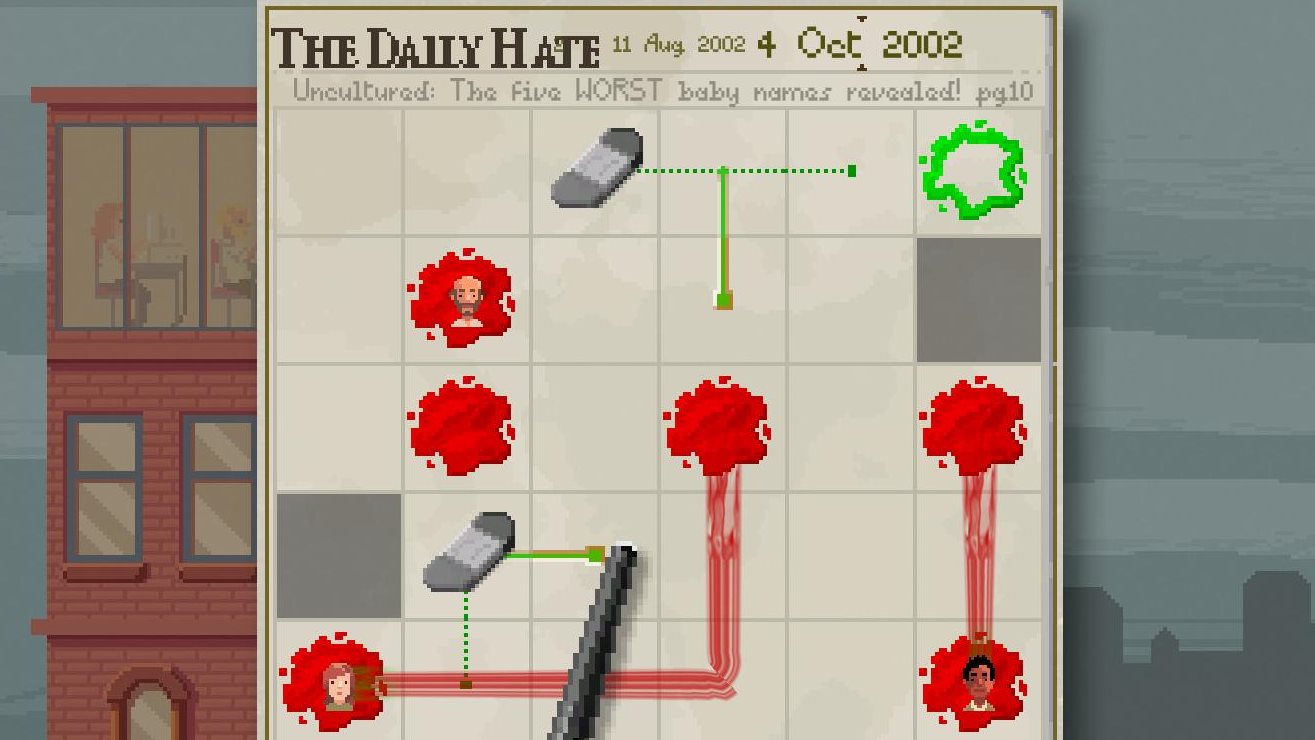 I think this works most cleverly in the second chapter - in which the puzzles are about aiming the trajectory of bouncing objects, and moving platforms to direct the bounce - where a character using a real-world short-cut is represented by a complex-looking puzzle that can be easily solved by, essentially, cheating. At Photographs' best, this interlacing of puzzle and story causes both halves of the games design to synthesise and elevate.

The stories themselves are deliberately vignettes, widely varied in their settings, but similar in their tone. One is a diving competition, another the nuanced story of Native Americans' encountering of Pilgrims, each a bleak analysis of compromise. They're sombre in tone, but throughout the game hints at possible hope. They do veer a little macabre, I should add. Blood everywhere doesn't really fit the overall tone, yet happens at least twice. But otherwise I really enjoyed these sketches. 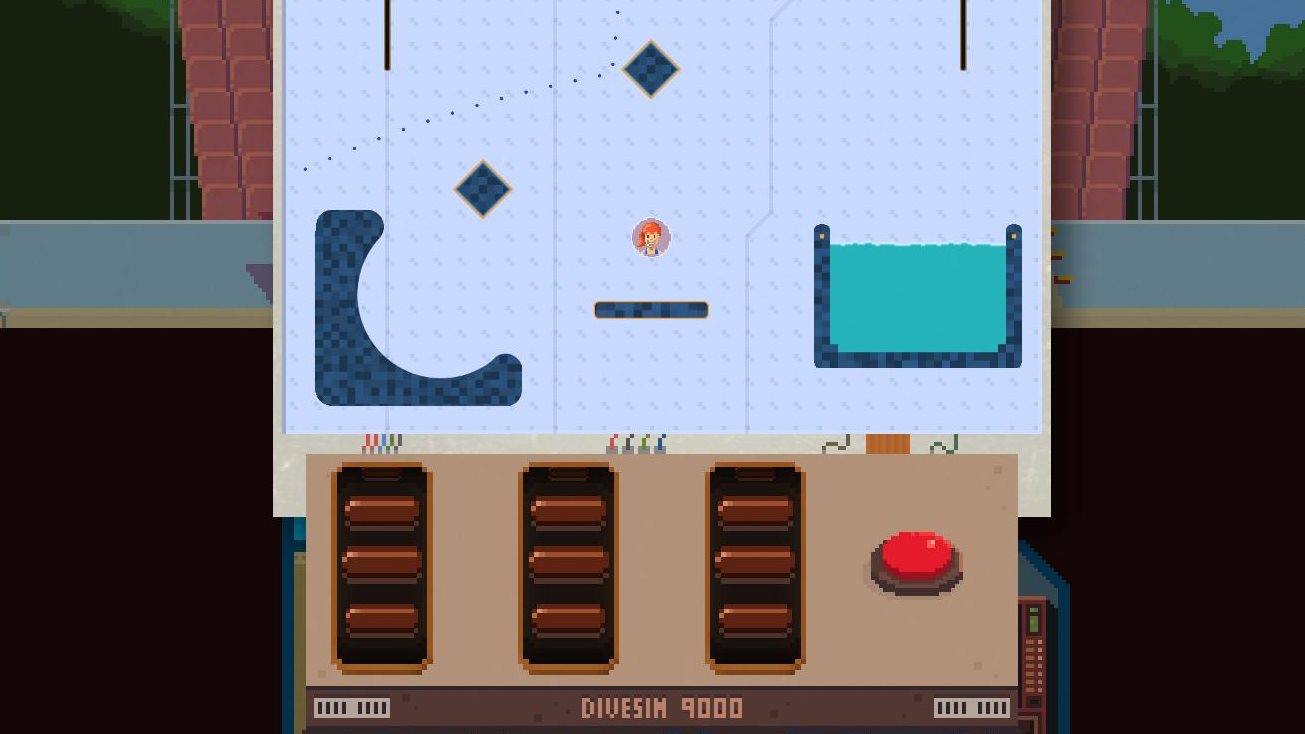 There are some oddities, however. To get to the next puzzle in any scene, you're asked to scour the pixel scene with a camera lens to find a named item or scene, which when hovered over takes a pic, and then, um, a Polaroid-shaped puzzle appears. But this scouring process is a wasted opportunity. It's never tricky, it's never interesting. It's just a case of moving over the coffee vendor, or the graph, or the sad person, or whatever the verbal clue uncryptically suggests. If it were about solving a clue, or finding a small precise detail, it would have added something to the process. As it is, it rather feels like it's included to justify the game's name more than anything else.

The other issue is a bit more problematic - it's the nature of puzzle difficulty. It creates a bit of a no-win situation for the game, really. When they're too simple, they feel perfunctory. When they're difficult, they feel like they get in the way of hearing the story. The sweet spot in the middle is definitely hit in each chapter, but perhaps too briefly.

This is an issue I think most pronounced in the fourth chapter, but perhaps because I personally really didn't enjoy the puzzle type - about tracing routes through a grid to move characters to marked spots, a sort of Link-a-Pix with obstacles. I found it over-fiddly and unintuitive, so at the point where it became complicated at the end of the story, it felt more of a frustration than a challenge. 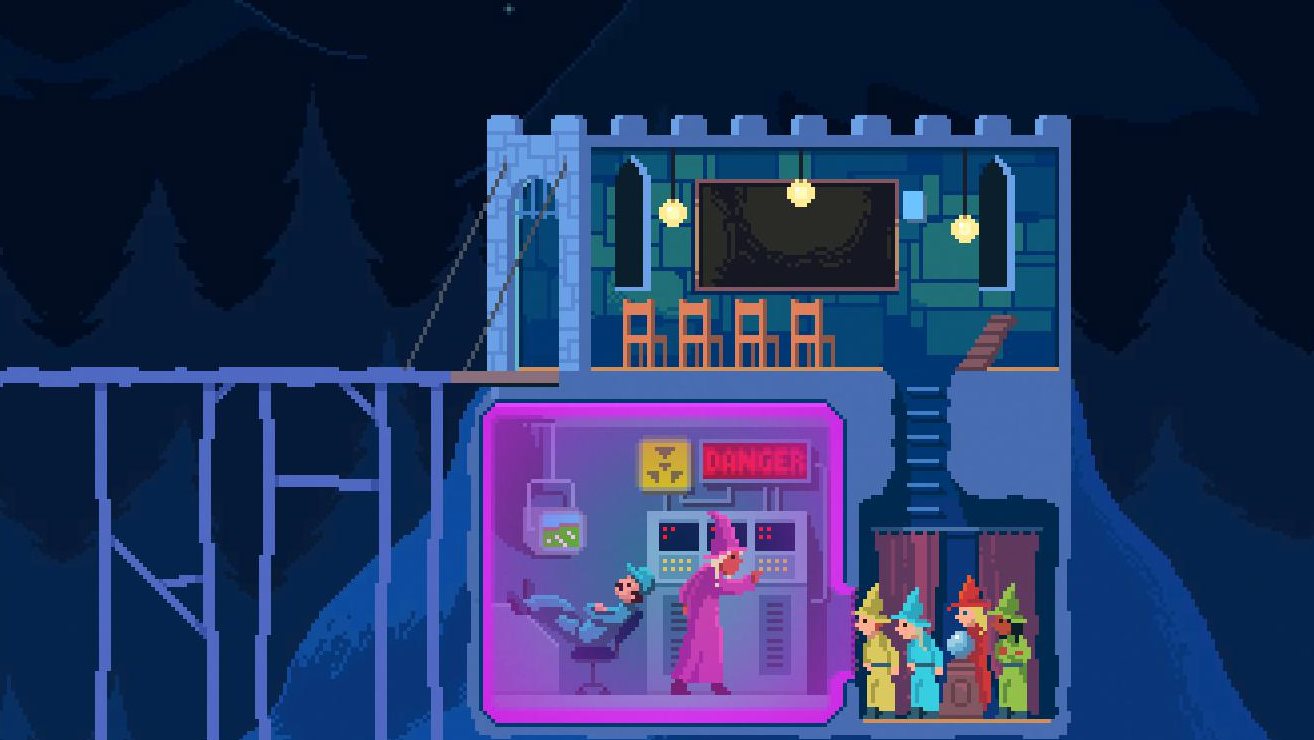 The art, as I've mentioned, is just so lovely. It's further enhanced by a splendid musical score, and some really decent voice acting. Atmospherically, it really shines. As a fully coherent finished piece, it wobbles. I think, overall, Photographs is a really good idea, slightly let down by occasional not-great puzzles. None is bad, nor unfair, but too often I felt like I was trying anything to see what might work, rather than deducing.

Yet, with five different endings, it managed to be a meaningful experience. Hindered by the puzzles as often as enhanced, but the ending I chose was impacting in ways I hadn't expected. There's one heck of a surprise in there before you even choose, and then the narrative conclusions are deeper than you might expect.

Photographs is a very novel experience (well, a very short story experience, fnarr), lovingly crafted, if not fully composed. I don't love it as a puzzle game, but it's a vignette of vignettes, and I like it for that.