If you click on a link and make a purchase we may receive a small commission. Read our editorial policy.
Plebby Quest: The Crusades review
A medieval strategy game that tries to make the genre accessible. If you've fancied painting a map in all one colour but were intimidated by grand strategy before, there are worse places to start.

Plebby Quest: The Crusades and I did not get off to the best start. This is partly because it’s called “Plebby Quest”, a dreadful title that has little to do with the game itself. Neither "plebs" nor questing featuring prominently. Instead, Plebby Quest is more like a diet Crusader Kings, offering a similarly grand medieval strategy in a package less likely to pack on the pounds by rooting you into a chair for several hundred hours.

The larger reason I struggled to get into Plebby Quest, however, is that it has one of the most unappealing art styles I’ve come across in some time. Every character in Plebby Quest looks like they took a walk through a scrapyard and accidentally fell into the car-crusher, emerging as a deformed flesh-cube. While I appreciate the attempt to make a grand strategy game that doesn’t look like it was created by an accountancy firm, I found Plebby Quest’s human dominoes actively disturbing to look at, and it was a while before I could see past them. 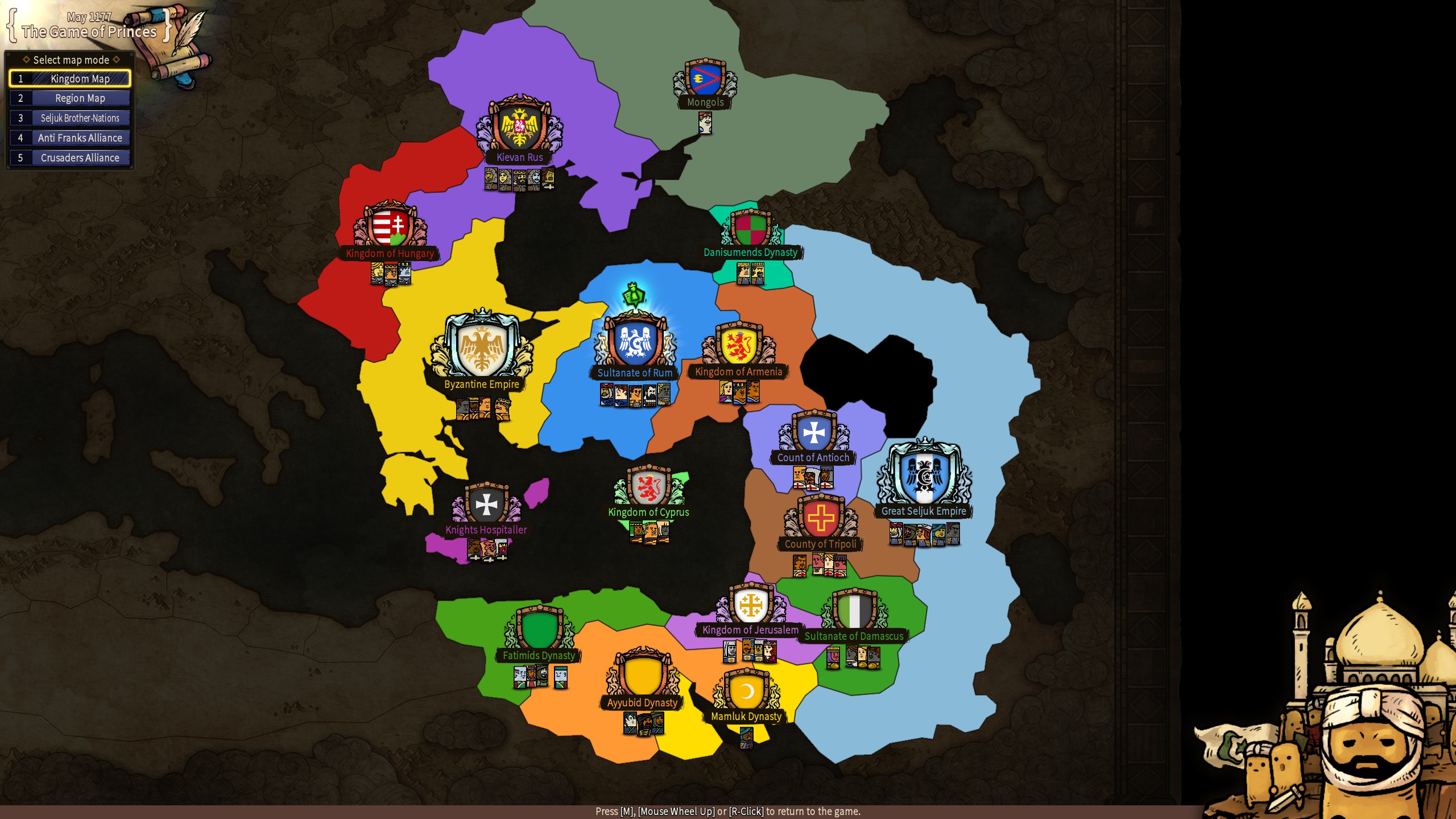 Eventually, of course, I did, and discovered a mostly decent strategy game with a few ideas I really like on the other side. Assuming the role of one of multiple Crusade-era leaders from around Europe and the Middle East, your goal in Plebby Quest is simply to convert its Medieval map to your colour of choice. You do this by deploying armies to conquer cities, researching more advanced ways to kill large numbers of heretics, and engaging in the odd bit of religious and/or political backstabbing.

Each turn lets you perform one action with each general currently allied with your faction. This could be to attack an enemy city, to “police” your own territory to quell unrest, or visit your local church or mosque to acquire one of several necessary resources (which is, of course, what religious institutions are for). A key goal of Plebby Quest is to add interaction into areas grand strategy games normally avoid. Acquiring research points in the mosque, for example, involves cataloguing books via a brief and enjoyable match-three game. 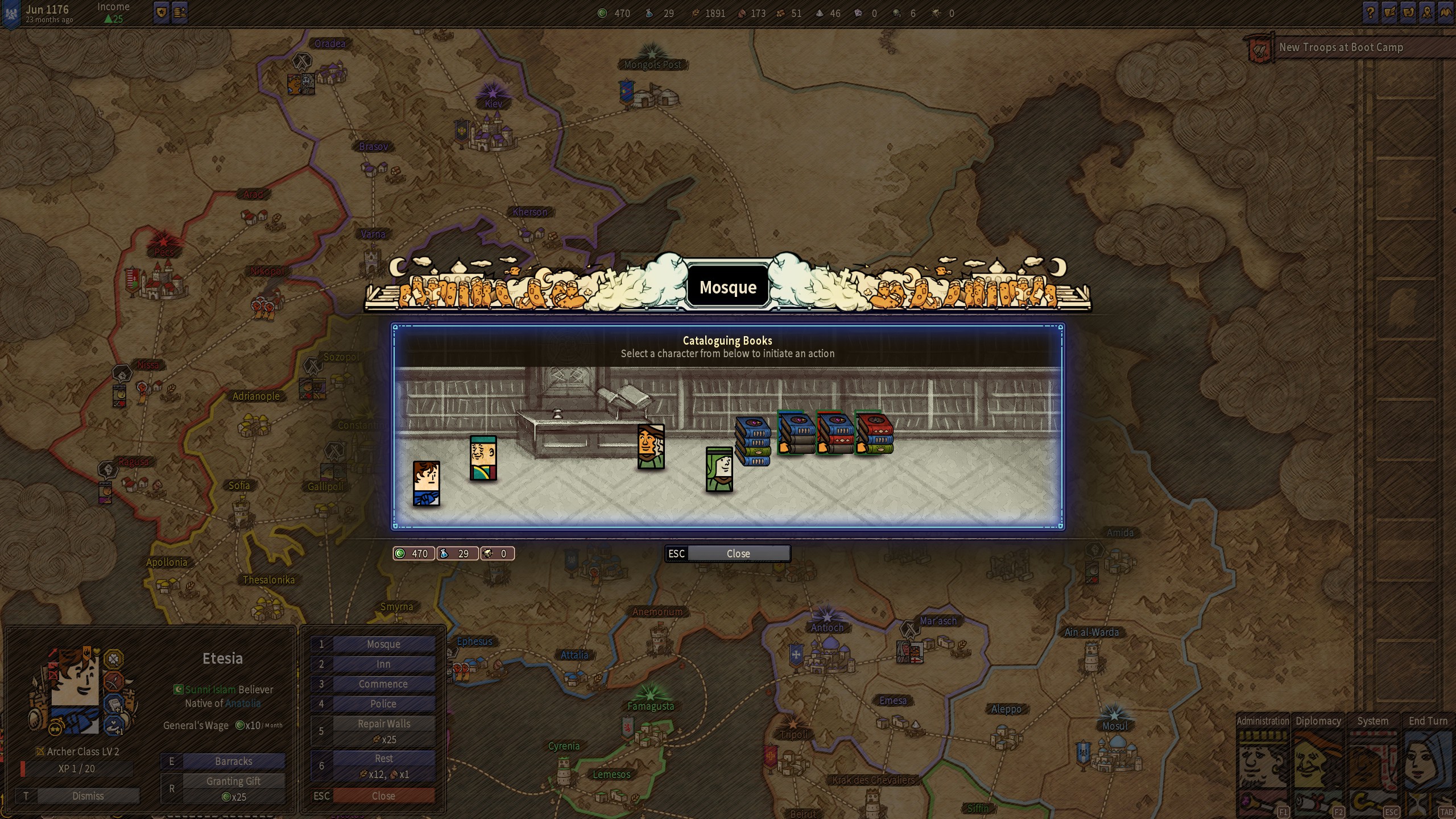 Battles, meanwhile, resemble a flash-based tower-defence game from the mid-2000s. Each general can command up to 5 units, which line up in rows on the battlefield and duke it out with the opposing force. Many battles simply come down to strength of numbers, but there is a basic range of tactical options that can make a difference in close fights. You can order units to switch places on the battlefield, useful for giving your front line a break from the fighting and a chance to heal. Cavalry can also be ordered to charge at an enemy, dealing a large chunk of damage and pushing back their line.

These simplified and varied elements of Plebby Quest succeed in making the game initially more accessible than most grand strategies. But the deeper you delve into the game, the more they start to obstruct the strategy rather than facilitating it. This is unfortunate, because the strategic layer of Plebby Quest is engaging.

As I mentioned, progression in Plebby Quest is achieved by capturing settlements. These come in three flavours: villages, castles, and cities. Villages can be captured easily, but castles and cities are much more difficult to conquer, often requiring you to assault them multiple times. Not only is this tedious, it’s also expensive, as besieging a settlements costs about a hundred gold for each assault. Fortunately, there’s a way to circumvent protracted sieges. By attacking the right settlement, you can cut-off others from the rest of the opposing Kingdom or Sultanate. Those newly isolated settlements become essentially abandoned and can be claimed without a fight. 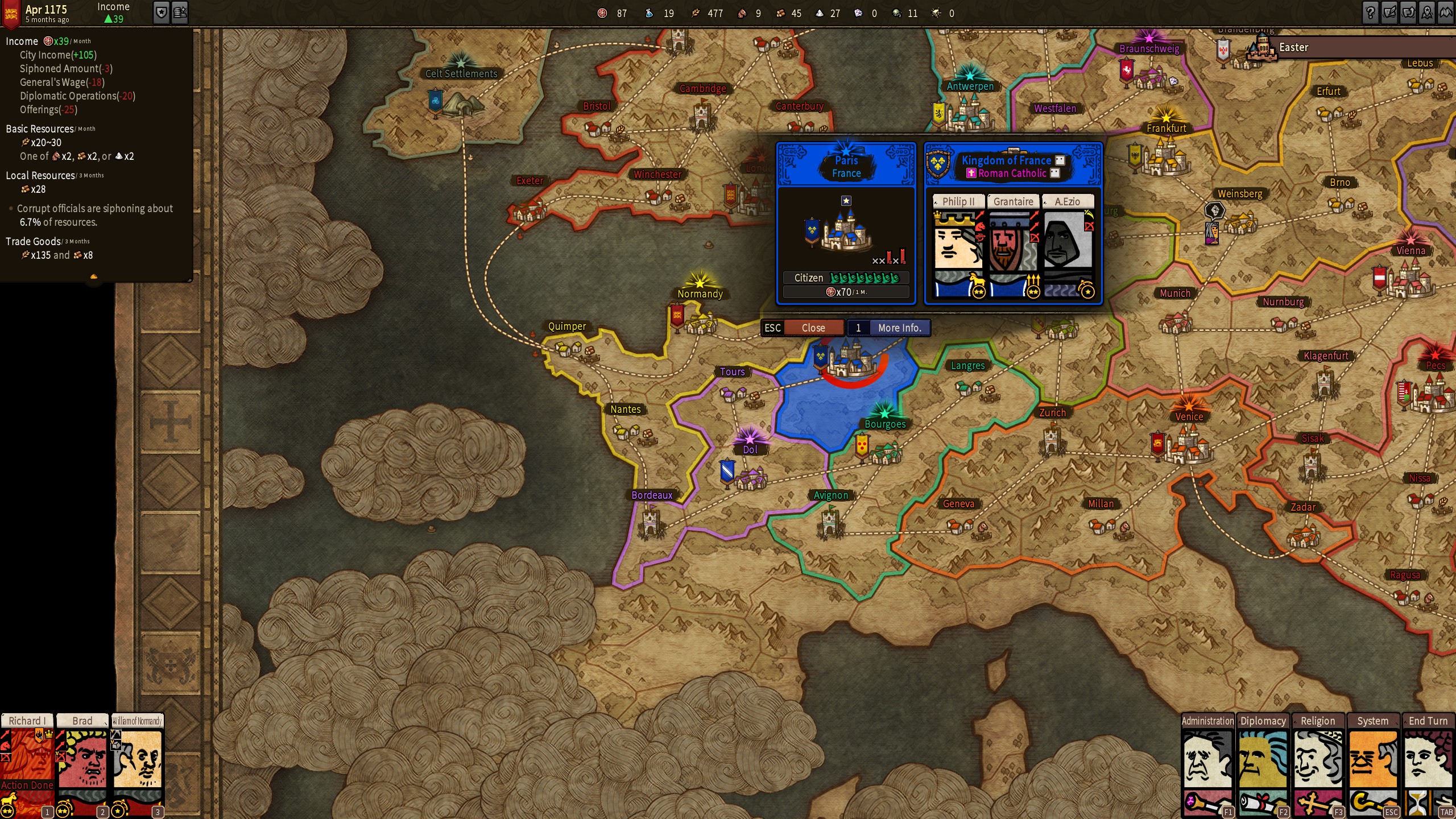 Like the excellent Unity Of Command, Plebby Quest isn’t simply about having the strongest army, but using what you have to exploit your enemy’s weaknesses. The opportunities to do this are limited by the fact that your army can only travel along set roads, but from time to time you get the chance to build new ones, which can be wielded like a scalpel to surgically slice off chunks of enemy territory.

Clever manoeuvres aren’t the only way you can get one over on an opponent via smarts rather than strength. Every so often, you'll be called to a religious conference, which is basically a massive, international argument, with Kingdoms throwing accusations ranging from heresy to harbouring witches at one another. Once the accusations have been made, everyone gets to cast a vote on whether they support or oppose them. Any upheld accusations will have severe ramifications for the state in question. Consequently, these conferences can be used to sow dissent and chaos into enemy factions that you can then take advantage of.

These nuggets of genuine strategy are undoubtedly the best bits of Plebby Quest, but they feel secondary to the mandatory mini-games attached to most actions. The religious conferences? They too come bundled with a mini-game where you need to persuade other factions to support your side of the vote. A neat idea, maybe, but it takes way too long to actually complete. 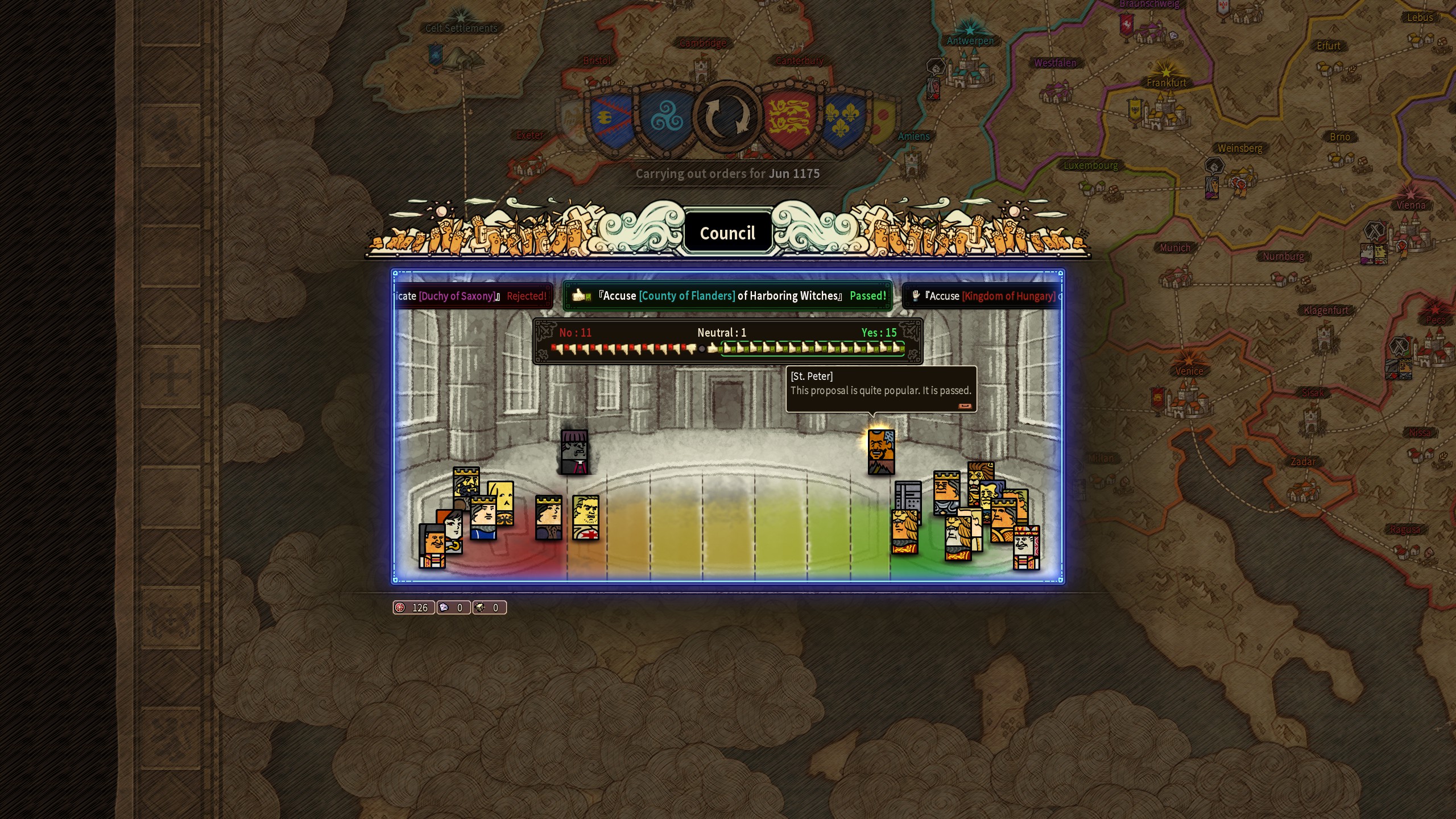 The strategic manoeuvres are when they’re available, but when they aren’t the result is often being forced into an achingly long siege that slows the experience to a crawl. You can only attack a settlement with one general per turn, presumably for balancing reasons. But it doesn’t make sense for a strategy game to deny me the ability to concentrate my forces in a specific direction.

For a game that attempts to streamline one of the least aerodynamic genres around, Plebby Quest often gets bogged down in unnecessary asides. Alongside the “Free Play” mode are three separate scenarios that act as extended tutorials, each of which comes with its own story. These scenes are packed with unnecessary dialogue that tries way too hard to be funny, like it’s on a first date and overcompensating for nerves. The initial scenario, focusing on the Sultanate of Rum, also kicks off with a parody of Martin Luther King’s “I have a dream” speech, in which the young Sultan Kilij Arslan proclaims his desire to have the largest harem in the world. Hopefully I don’t have to explain why this is in poor taste, and it’s another reason why I found Plebby Quest difficult to like at the outset.

In spite of these issues, Plebby Quest just about succeeds in what it sets out to do. If you’ve always fancied painting a big map in the colour of WAR, but get intimidated by complex UIs, there are certainly worse places to start. That said, I’d be more inclined to recommend something like the aforementioned Unity Of Command, which cuts right to the heart of large-scale strategy without a single mini-game in sight.