Premature Evaluation is the weekly column in which we explore the wilds of early access. This week, Fraser’s delving into the confusing world of cryptocurrencies in Blockchain Tycoon. What is a blockchain? Why are people mining them? Are there tiny digital pickaxes? A lot of questions need to be answered.

Blockchain Tycoon has been designed with an eye towards realism, apparently, and while I’m a stranger to the mysteries of cryptocurrency (there’s only one kind of cash that I have any interest in), I’m still convinced that things couldn’t start in a more authentic manner. I, an inexperienced and overconfident man, have been given a huge stack of cash and a warehouse from which I can grow my fledgling startup into a cryptocurrency empire. It’s a classic riches to riches story.

A brisk tutorial sets me up with everything I need to start making money. Well, digital currency, which I can then sell for money. Ultimately, this is still a game about accumulating large amounts of conventional cash. In my aggressively grey warehouse, I plonk down shelves, a power supply and a cooling system to deal with the heat that will inevitably be generated by the army of GPUs that I’ll be stacking on the shelves. 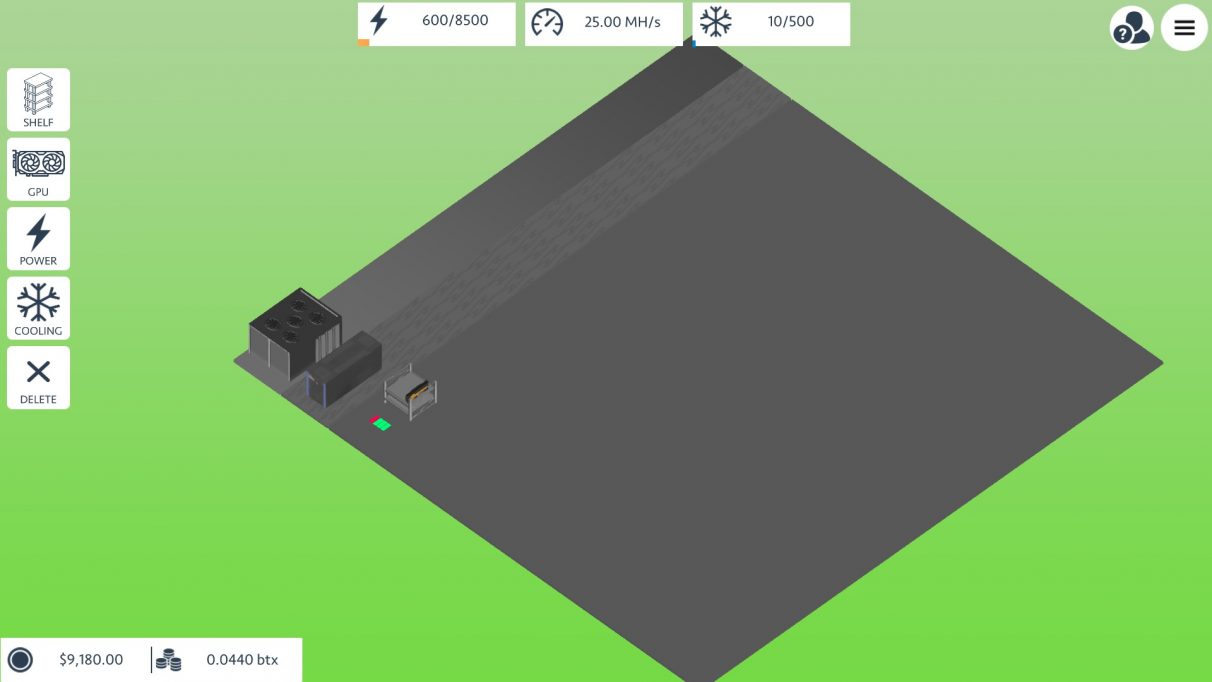 The GPUs are the important part. They confirm blocks in the blockchain, essentially currency transactions, which is what the miners get rewarded for. More GPUs, and more powerful GPUs that can calculate hash values faster, netting me more cash. So I fill the shelves with them and watch my balance go up. I cash out a couple of times, selling it for dollars that I then turn into more GPUs. This is why you need to get a second mortgage if you want a decent graphics card - they’re scarce.

Even this sliver of information is more than I get from Blockchain Tycoon. It’s not that it’s obtuse - the tutorial does its job - there’s just no reason for it to break down the business of blockchain mining because everything is largely abstracted and automated. I just need to be able to keep those shelves filled and chilled. 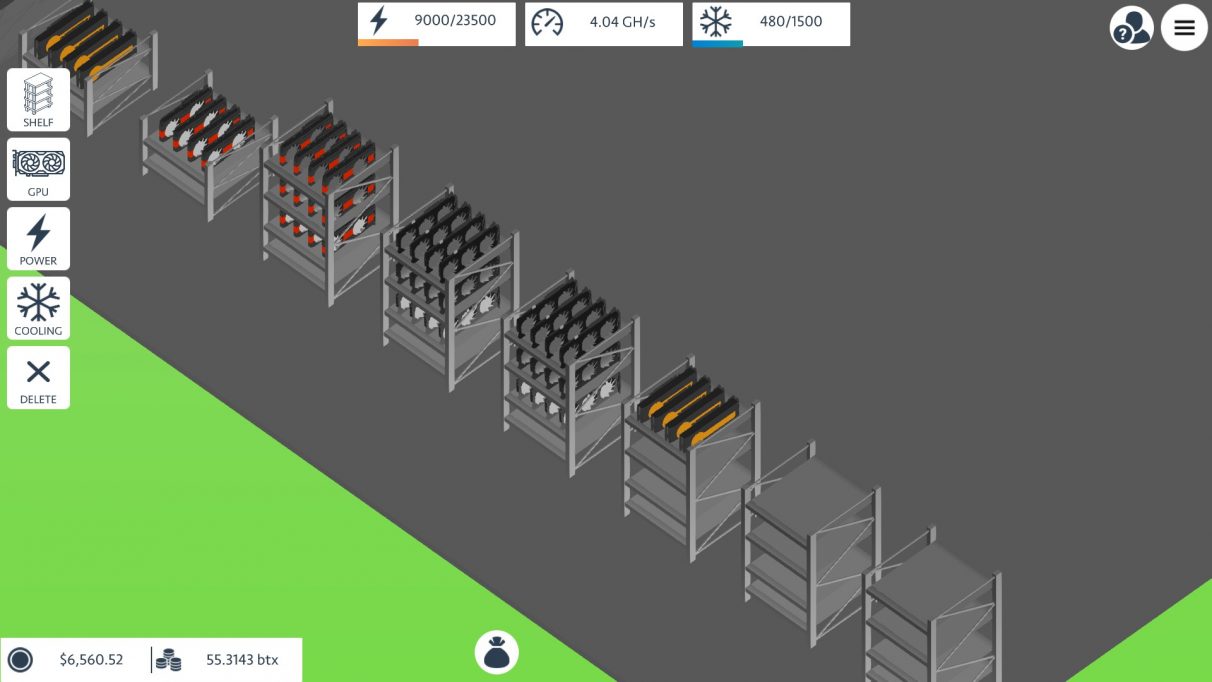 After making a tidy profit, I upgrade to a larger but still depressingly grey warehouse. I have a few options, but no reasons to pick any other than the Moscow location. Each of them costs the same (free for now or $1 million later) and the only differences are the price of electricity and temperature of the air. Moscow has the best in both categories, so I dig out my musty ushanka (it smells of cigarettes and buyer’s remorse) and move in.

I’m given yet another large pile of money, letting me almost immediately fill the first room. A pop up informs me that I can now purchase ASICs, which I am assured are better than GPUs. I have so much cash that I can fill every shelf with the most expensive ASIC, rendering every GPU (and shittier ASIC) completely obsolete. I’m about 10 minutes into the game. 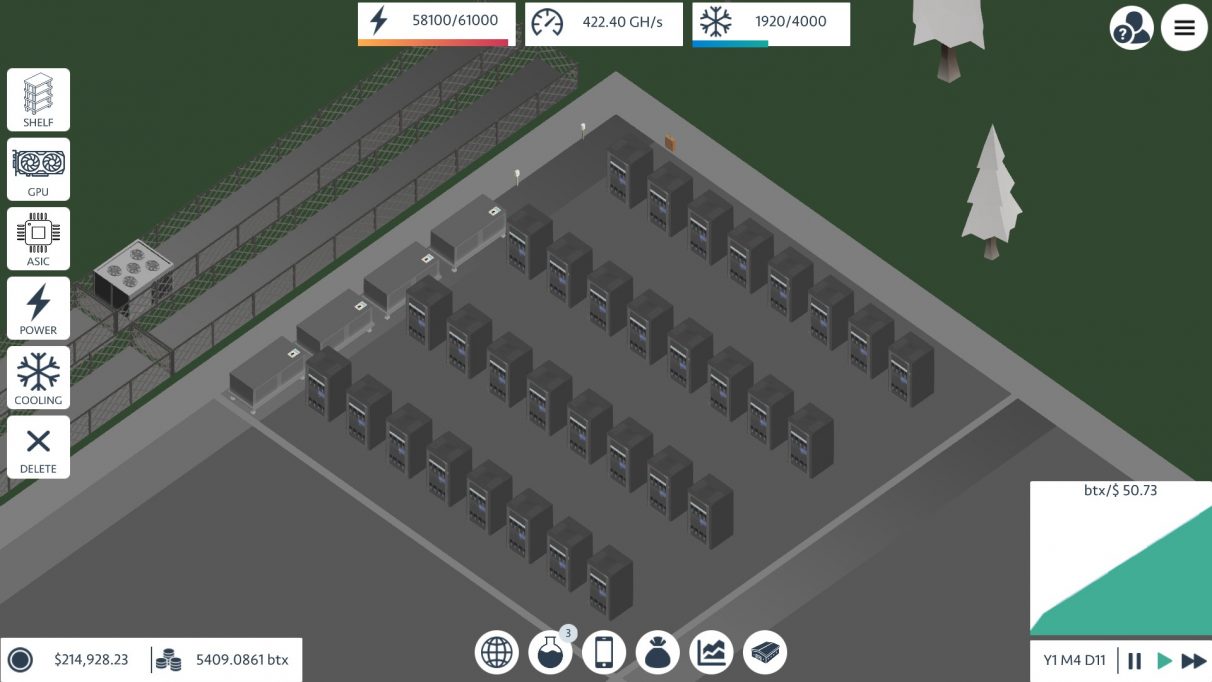 With a whole room dedicated to mining cryptocurrency, I’m rolling in it. I buy all the other rooms in the warehouse; when I run out of cash, I just sell my digital stash and my balance is nice and fat again. It’s going so well that my R&D division is a bit redundant. I’m paying them to generate research points, but what do I even need to spend them on? There’s a branch dedicated to GPUs, which I'm not even using anymore, and it almost seems greedy to lower costs or improve the speed of hash value calculations of my ASICs when I’m already disgustingly rich.

My 50-person R&D team rapidly goes through the research tree, and once they’re done I fire them all. I instantly regret it. There’s nothing for them to do, sure, but I certainly have enough money to keep them on. I hire 100 more to soothe my guilty conscience. It's the busiest I've been since I bought the warehouse.

The market fluctuates and more miners appear, but it doesn’t make much difference to me, a cryptocurrency behemoth. With the Moscow warehouse filled, I buy another one in Iceland. You can tell because of the ice. It really makes the grey pop. 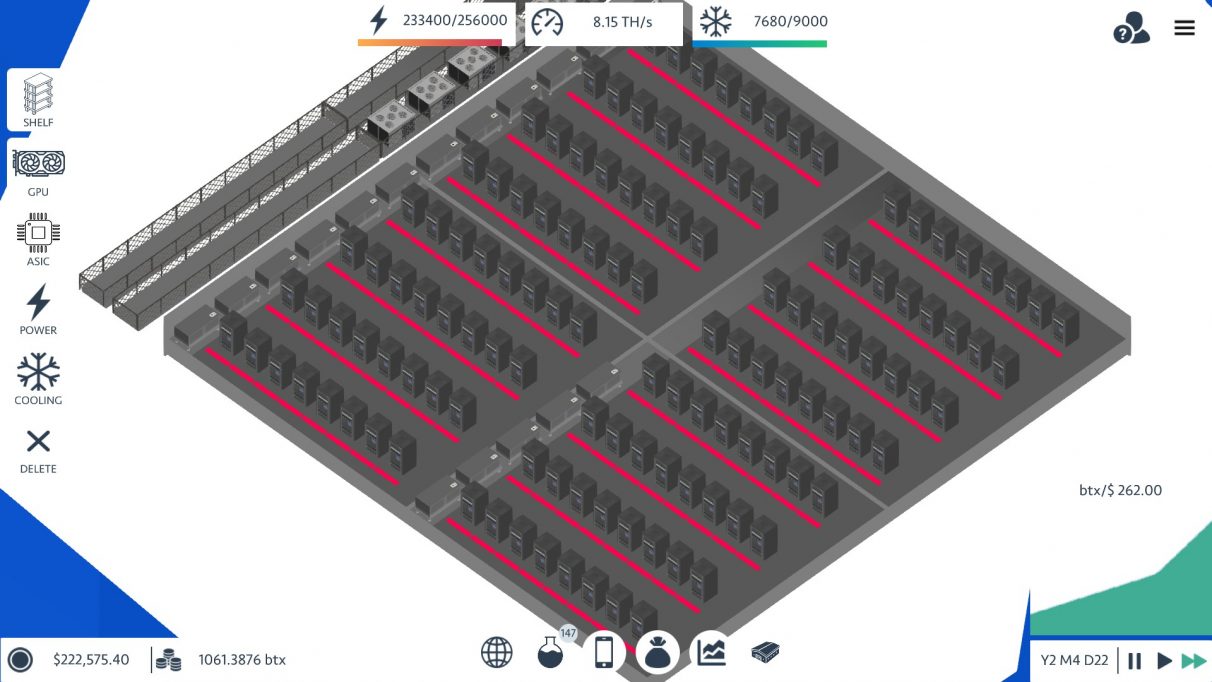 I go through the motions again until I realise this is it. I’m 40 minutes into my bid for bitcoin dominance and 10 minutes past the point where it stops. Blockchain Tycoon might have a tycoon theme, but it’s not remotely a management game. With its constant escalation, simple repetition and dearth of obstacles, it has more in common with a clicky idle romp. They’re designed to be played until you finally come to your senses, however, with large, colorful progression systems that seduce you back to them in brief spurts. Blockchain Tycoon just has more warehouses.

The early access roadmap presents something more recognisably tycoon-like, promising things like maintenance robots (and I assume maintenance), depreciation mechanics, market manipulation, warehouse customisation and the ability to make your own currency. Importantly, they’re mostly specific to cryptocurrency businesses, as well. Right now, Blockchain Tycoon might as well not be about blockchain mining at all. 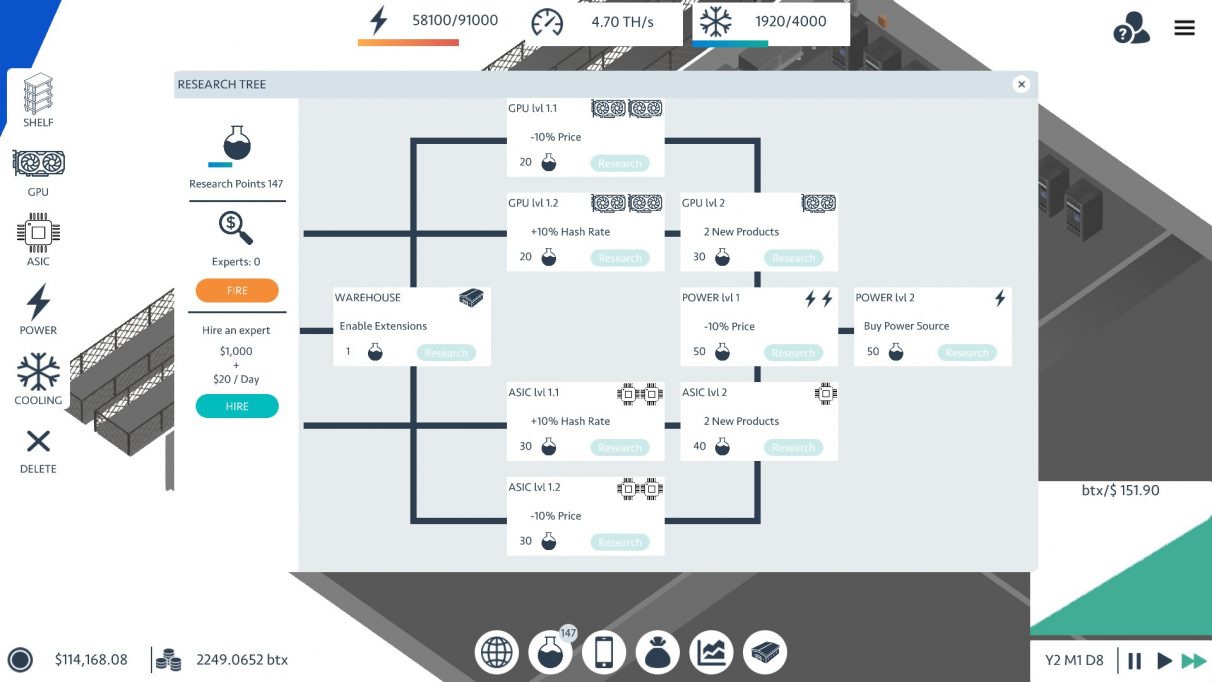 The unexpected price fluctuations, fraud, constantly changing technology and countless new currencies just aren’t there. Without them, cryptocurrency makes an absolutely terrible business to build a tycoon game around. Unlike running theme parks, rail companies or game developers, you’re not making anything, you don’t have any staff or customers to worry about, there’s no logistical obstacle or management conundrum that requires your attention. You’re buying computer parts and then just letting them do all the work. Until they’re replaced with something else, they leave extremely conspicuous gaps.