My first crew, The Fun Time Club, got deep inside an ancient space wreck without too much trouble, but overconfidence breeds recklessness. A fight with a trio of psychotic robot janitors exhausted them so much that they couldn’t get back to their ship. They died forgotten in some unremarkable corridor. Their successors, The Revenginators, didn’t even get that far, failing to live up to their awful name by immediately getting turned into lunch by some ravenous space worms.

Deep Sky Derelicts falls firmly in the ‘let’s shame Fraser’ category of tactics romps, joining the likes of XCOM and Darkest Dungeon, the latter of which it most closely resembles. Indeed, developer Snowhound cites the eldritch turn-based RPG as one of Deep Sky Derelicts’ inspirations. The presentation and the permadeath system all feel pretty familiar, but it charts its own course clearly enough that it’s a lot more than Darkest Dungeon in space. 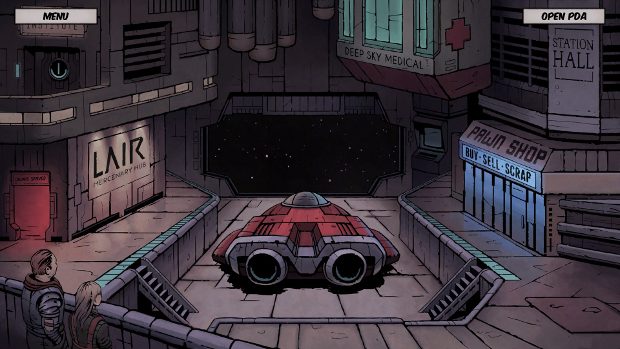 At the moment, it’s a vertical slice: a few hours of exploring ruined ships, running a couple of jobs, plenty of fighting and the briefest whiff of a story. It’s short, but not as slight as its length suggests. Certainly, there are lots of ways to approach the space hulk raids, with seven distinct classes on offer and plenty of weapons to kit them out with. Parties are groups of three, leaving lots of room for experimenting with party composition.

I’m partial to the bruiser, backed-up by a medic and a leader. The bruiser’s a tanky scrapyard Space Marine type who likes to get up close and personal to batter enemies. They start off with plenty of health and shields, and with the right mods and weapons they can do a ridiculous amount of damage. That leaves the leader to buff the party and stun enemies while the medic keeps everyone in tip top shape. They work well together, but ultimately they’re at the mercy of their cards. 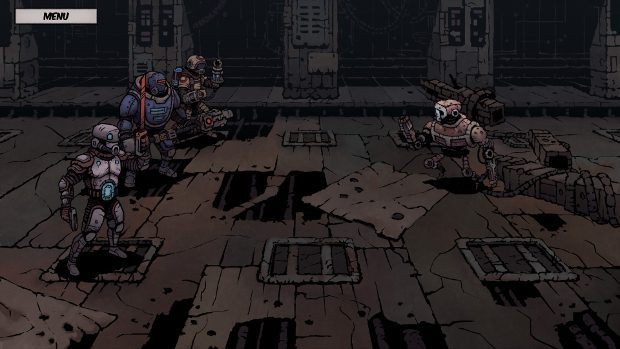 Each class, piece of gear and mod comes with one or more cards that then get shuffled into that character’s battle deck. So as well as stats like damage or shields, they can open up entirely new abilities and tactics. These run the gamut from damaging a whole row of enemies with a shotgun to increasing a character’s initiative so they can throw some grenades before their foe’s turn.

I eagerly beefed up my deck as quickly as I could, which is absolutely not the way to go. Sure, I had some nasty surprises for the robots I was brawling with tucked away in the deck, but they were far outnumbered by the countless shield buffs and situational abilities I’d crammed in there. That’s the balancing act - trying to create a varied, clever deck, while also avoiding bloat. It’s not easy. 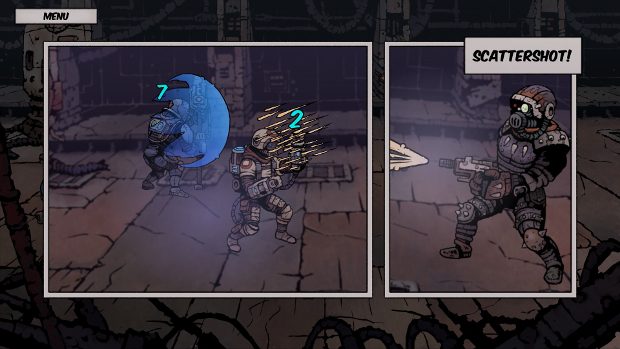 Cards are doled out at random, and it costs energy to draw extra ones, so you’re either bleeding energy or you’re useless, at least when faced with a row of crappy cards. Wasting energy is the game’s biggest obstacle. Fighting, exploring ships, scanning areas - they all cost energy, and when you run out, you’re dead. That means becoming obsessed with energy consumption is key to getting out of derelicts alive. After a couple of dead crews, I learned to pick my battles and retreat, a lot. If a fight takes too long, it’s going to be a pyrrhic victory at best, potentially costing the energy you might need to get back to your own ship.

My original scavenging buddies, the aforementioned Fun Time Club, died because I kept trying to pummel robots even after my energy got down to 30 percent. I kept burning through it, drawing new cards when all I was getting was useless junk, completely ignoring the entirely obvious bar that should have been setting off alarm bells. Sure, the robots ended up getting flung on the scrap heap, but getting junked in a battle sounds considerably more pleasant than slowly dying of exhaustion in a sprawling labyrinth that’s floating through the void. 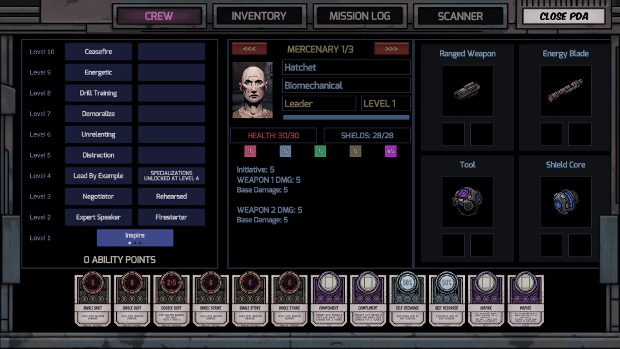 The problem with the energy system is that cautiously managing it is not nearly as much fun as to saying to hell with it and marching into the unknown, ignoring the meter entirely. Despite the inevitable death. See, derelicts are huge, procedurally-generated mazes, so fully exploring them means frequent trips backwards, all the way off the ship and back to base to buy more energy. I never felt like I’d had a complete experience before turning around again - each adventure was fragmented.

It’s not entirely the fault of the system itself, rather it’s a byproduct of the very boring derelicts. There are three kinds of encounters: searching for loot, NPCs and combat. Only the latter actually requires player interaction. And the combat is great, it’s just that each ship only has a handful of fights and barely anything else. A greater number of encounters would go a long way to making it possible to have a proper adventure before jetting off back to base. It would also be lovely if the entire adventure didn’t take place on a plain grid. 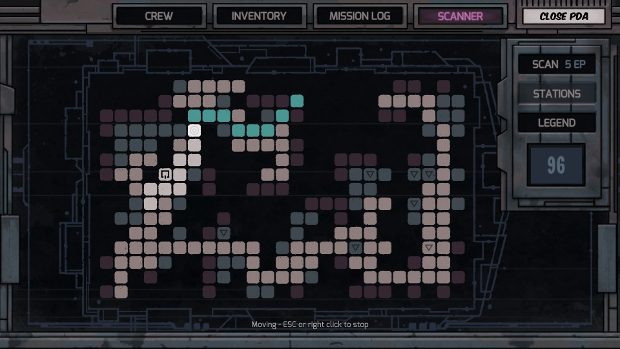 I’m all about that graph paper map nostalgia, but presenting the labyrinthine corridors of a huge space tomb as nothing more than a grid is taking it a bit too far. The conceit is that you’re using your PDA - retro-future indeed - to keep track of your bearings, but you can’t move without it taking up the entire screen, hiding one of Deep Sky Derelict’s biggest hooks: the art.

The universe looks very much lived-in. It’s dirty and messy like the grottiest parts of Star Wars, but also weirder things like Brandon Graham and Simon Roy’s Prophet revival. Most of the characters are human, but everything still feels extremely alien, especially when each member of the crew is constantly decked out head to toe in armour. They could look like anything under all that. There’s a tired grimness pervading everything, exaggerated by the rusty, rundown ships and their merciless denizens, but it’s not without comic book whimsy. I want to see more of it, so let’s maybe lower that PDA a wee bit. 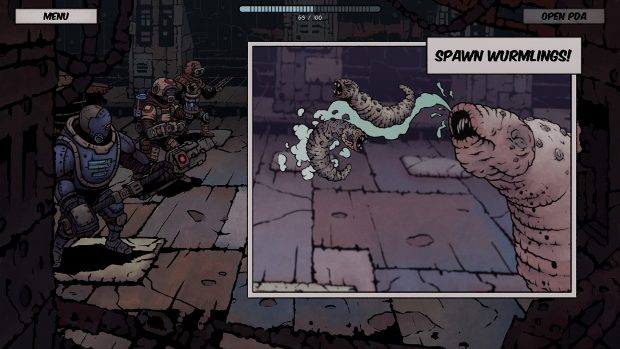 It’s tempting to be a backseat designer and suggest cribbing Darkest Dungeon a bit more by aping its menu design, where the map and inventory take up the lower part of the screen, letting the art take the spotlight. At the same time, some of the best parts are where it deviates from its inspiration. Having more control over characters - specifically their gear - is a great boon, and the deck system is already surprisingly robust, but more importantly it’s a great deal of fun to experiment with. It’s a very confident RPG for such a relatively new studio.