Premature Evaluation is the weekly column in which we explore the wilds of early access. This week, Fraser’s getting hunted down by streamers in Islands of Nyne: Battle Royale. It's a sci-fi FPS in a lovely alien theme park that also happens to be a massive murder arena full of angry supersoldiers.

Islands of Nyne bills itself as a battle royale for the competitive crowd - specifically the FPS lot - so as I hurtled into my first game, it felt a little bit like I was crashing a stranger’s party. The third-person, messy battle royales that are sprouting up everywhere leave a lot of room for luck and second chances, but Islands of Nyne is all about precision, speed and being shot in the head by a Twitch streamer. It’s been a struggle.

Though directly inspired by Plunkbat’s predecessors, Islands of Nyne plays more like a sci-fi CS:GO built inside a battle royale arena. It’s first-person-only, gunfights are brief flashes of action, and reflexes and weapon-familiarity trump everything else. Playing it makes me feel old and tired, and every miraculous kill tricks me into thinking I’ve found my rhythm right before I’m once again murdered by a faster, sneakier player. 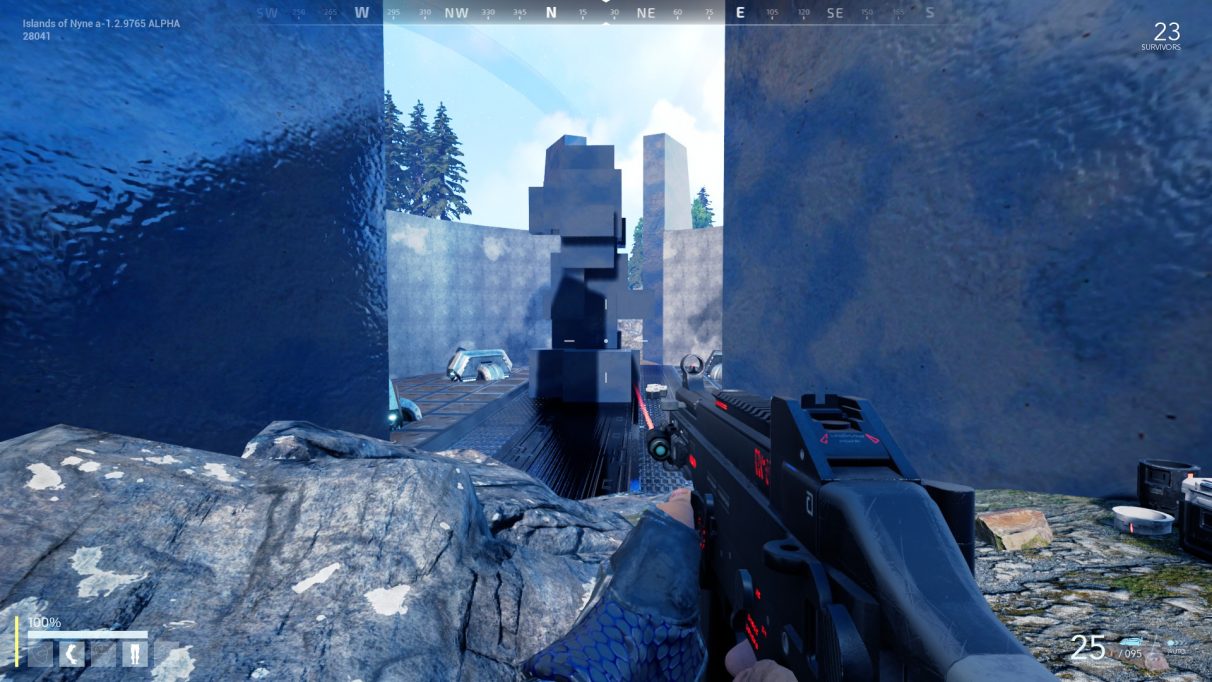 Despite being set inside an alien arena filled with relics of Earth’s past, it skews more towards realism, or at least authenticity, when it comes to its guns. They’re all weighty bits of kit that feel powerful but not always easy to control. Reloading is slow and deliberate, so it’s a real killer, which balances out the fact that the map is jam-packed with ammo. You still need to make your shots count. Players can also find armour and shields in such vast quantities that, beyond the first minute, you’ll almost certainly be facing enemies that can handle a few bullets, so it’s all about those headshots. Bad news for me!

There’s no fall damage, which is always excellent news. Falling from a great height means you’ll briefly get locked into a superhero landing pose, so there are risks to jumping off cliffs, but otherwise go nuts. There are launchpads, too, which fling you into the air, making you a big target for all your fellow killers, but also letting you traverse great distances or get to some hard to reach perches. And even when you’re not soaring across ravines, you’ll be able to get around quickly thanks to your tireless supersoldier legs. 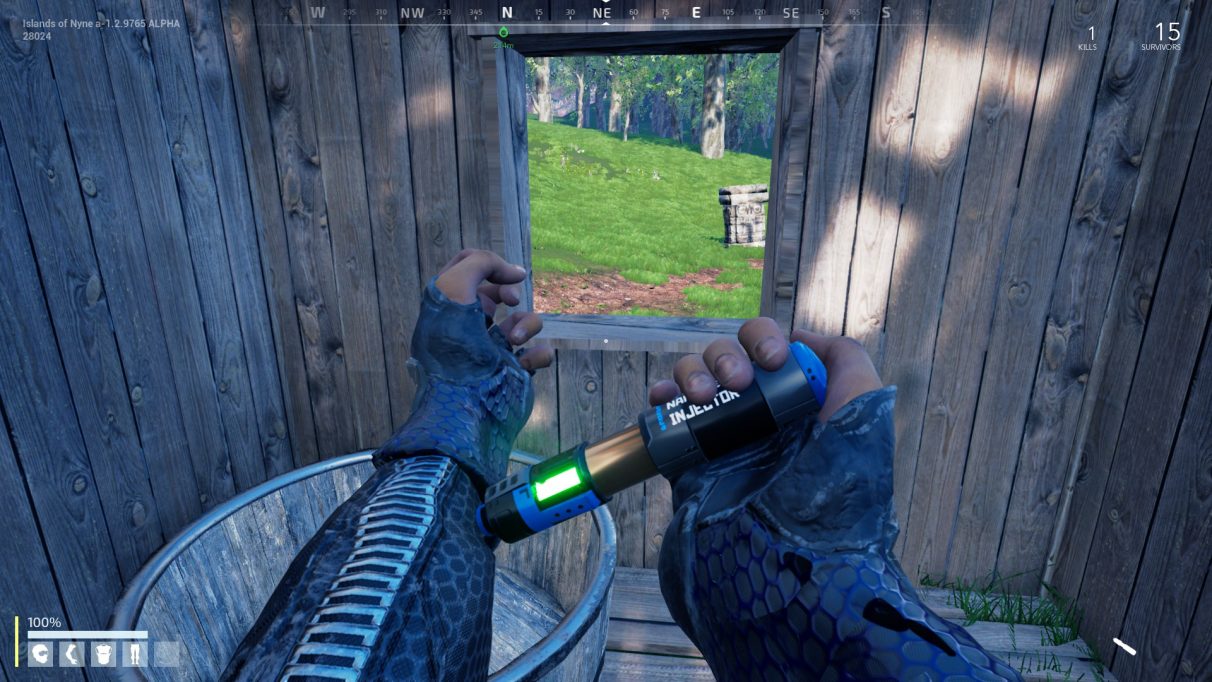 It’s shaping up to be a slick FPS, but as a battle royale it's all very familiar. You drop into a quickly shrinking map, scrounge up weapons and armour and then try to kill everyone you come across. Even Plunkbat throws in a few more wrinkles. There are no unexpected obstacles, no vehicles, nothing that gets in the way of the shooting. It’s utilitarian, and while that might lend itself well to competitive fights, I can’t help but feel I’d be enjoying myself more mucking around in Tomato Town or getting into an impromptu car chase in Erangel.

The changes it makes to the mode are more iterative, mostly tweaks, though they’re still well-considered and welcome improvements. Every match begins with you already plummeting to the ground, but you ultimately have a lot more choice about your landing zone than you do in the average battle royale. See, after you join the game in mid-air, you can fly across pretty much the whole map, landing wherever you want. And you can make an informed decision, too. Instead of landing and then, moments later, discovering that you’re miles away from the first safe zone, the location of the zone appears while you’re still falling. You can choose whether to be in or out, depending on your strategy.

Islands of Nyne’s alien overlords have also seen fit to provide players with only tracer ammunition. Every round fired is a vicious shooting star that sends a single, clear message: “Hello, the shooter is here.” In concert with the solid sound design, this makes it easier to hunt down other players and get into shootouts. The visual effect fades the further away you are, but I’ve seen gunfights kick off a fair distance away, too far to reach in time.

The diegetic map and inventory make sure you won’t get too distracted (there’s nothing worse than getting shot while you’re orienteering), and there’s even a hint of a modular HUD. When you pick up a helmet, it augments your HUD, giving you a waypoint on your compass that directs you towards the safe zone. It’s an extremely minor convenience, but perhaps a precursor to more augmentations. I’m dreaming of a Crysis suit, but I think my dreams might be too big. I can’t imagine Islands of Nyne introducing anything that might upset the balance of its skill-based battles.

I’m conflicted about the density of gear caches. Unless you decide to land in the middle of nowhere, far from any buildings or ruins, you’ll be completely tooled up in a minute. Actually, a minute’s a bit conservative. You get three weapon slots and some space for grenades, healing syringes and three pieces of armour, and there’s a good chance you’ll fill them all up after raiding just a couple of houses. It means you reach your full potential almost immediately and makes it unlikely that anyone will win a fight just because they’re better equipped. It condenses a whole phase, the desperate scavenging for medicine and guns, into a 30-second blitz. Ostensibly it’s designed to kick off more shootouts, earlier, but I’ve found that the opposite is equally true. 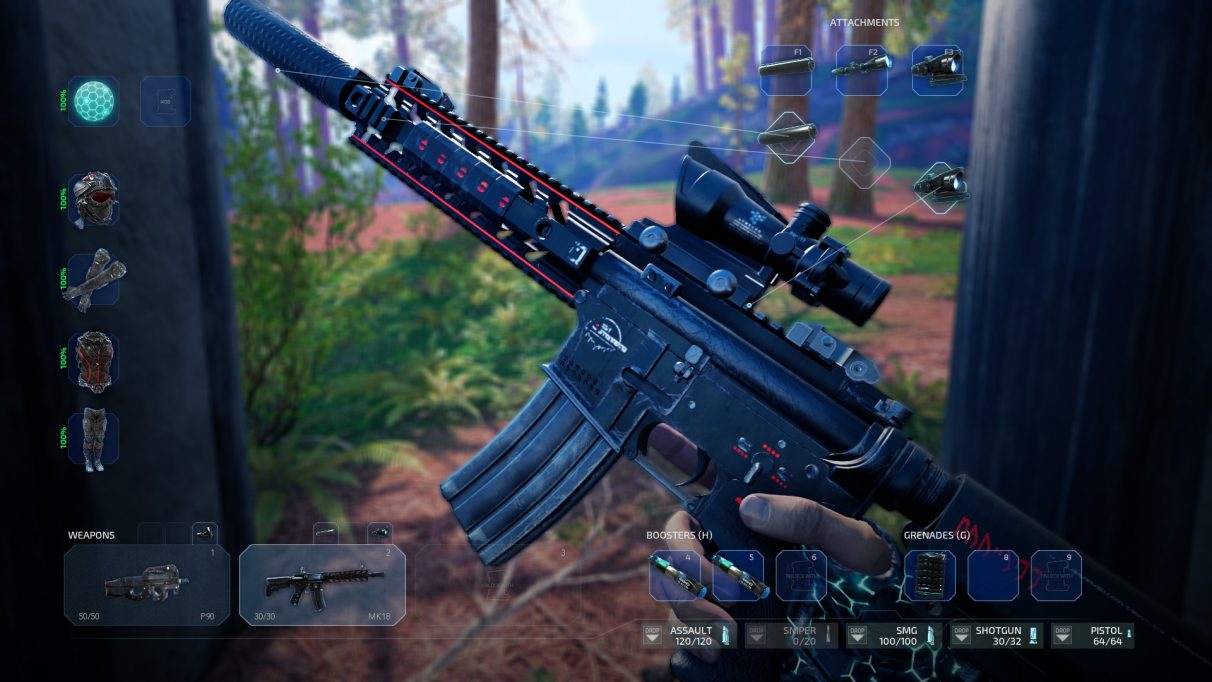 It typically only takes a few minutes for half of the players to die, but after that it slows to a crawl. 50 players seems a bit on the quiet side as it is, but when that almost immediately drops to the 20s, on a map that’s both large and bursting with places to hide, you’ll spend most of your matches just looking for one player. When the circle gets tiny, the pace picks up again, and matches don’t run longer than 15 minutes, but that 10-minute lull in the middle feels dreadfully long. There’s absolutely nothing to do aside from find a heavily-armed needle in a really big haystack.

The multitude of discrete arenas that exist within the greater one - a Mesoamerican temple, a pirate ship, the Colosseum, plenty of castles - are usually left completely empty. In one particularly quiet match I spent the whole time exploring the north coast of the island, climbing up a mountain to get a good view of the world below, trying to get a good screenshot of the colossal statue guarding the beach, mucking around in a medieval harbour, and I didn’t see a single person. I was desperate for a fight, to the point where I started indiscriminately firing my weapon in the hopes that it would alert nearby enemies. Unfortunately, the tiny number of players meant the chances of finding someone in one of these interesting locations was infinitesimally small, even if the match starts with a full lobby. In the end, I got sniped in the woods. 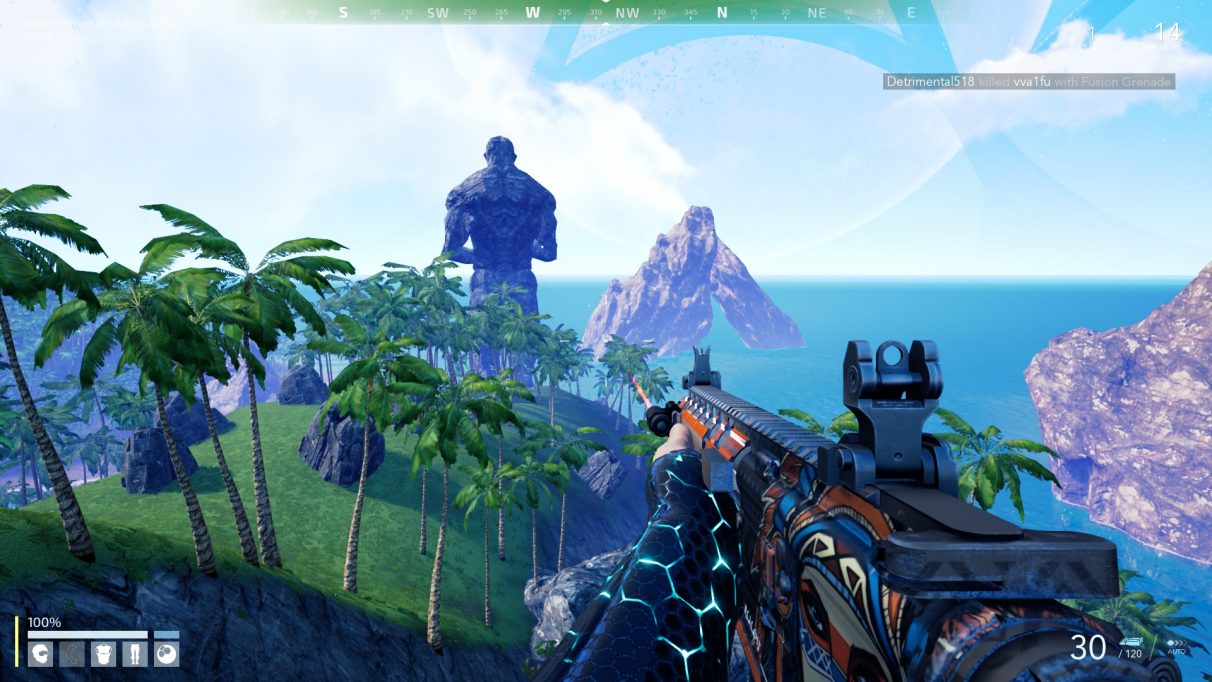 A smaller starting safe zone or greater numbers of players might help, but what Islands of Nyne really needs is something that draws players towards a specific area in a more immediate way than the giant plasma field that’s slowly closing in; it needs something for players to fight over. But again we come up against the problem of players having everything they need from the get-go. Something unique that you can’t get anywhere else might be the ticket, but that might be at odds with the parity between players that the game promotes.

Islands of Nyne was probably never going to be my kind of battle royale, with its competitive slant and players who are very good at killing me very quickly. It’s a great shooter, but it’s also incredibly dry for a game about supersoldiers murdering each other for the entertainment of evil, time-travelling aliens. With one exception. Before every match, players spawn into a lobby set on a rocky, volcanic world with low gravity. You can bound around and leap over mountains as an endless barrage of bullets fills the air. The game lets loose, reimagined as something with messy duels and pitched battles that span mountain ranges. There the hint of something wonderful and dumb in those minute-long scraps.