Premature Evaluation is the weekly column in which we explore the wilds of early access. This week, Fraser’s going serfing in Life is Feudal: MMO, a game that pitches itself as hardcore, realistic and unforgiving. Fun!

Easily confused with Life is Feudal: Your Own, Life is Feudal: MMO takes the multiplayer medieval crafting and survival game and makes it larger and, through developer-run servers, more permanent. The running theme throughout the series is that life sort of sucks. It’s cruel and dangerous and everyone in it is an arsehole. With that in mind, I have crafted a perfect character: a man so defeated and miserable that nothing is capable of fazing him.

Meet Doderick Soup, the unluckiest man on the planet.

Like all those escaping the wars and Elder God shenanigans kicking off on their home continent, I’ve washed up on the shores of a grim and unfriendly island with only the rags on my back (or in my inventory). The only signs of other players are the loot bags and graves scattered everywhere. It’s raining, of course.

I’m warned that this whole surviving malarky is a tricky thing and that, as a new player, I should follow the quests on this newbie island. Being a good boy, I heed this wise advice and make my way down the road. I meet a bloke who has mastered the skill of brevity - something I suspect will be a life-long journey for me - and points me in the direction of the island’s village.

It turns out that nobody is keen to talk to me until I've spoken with the elder, but frankly I’m not sure I really want to get to know anyone in this almost comically miserable place. Look how many people they’ve gone and hanged. It's like this all the way down the road. 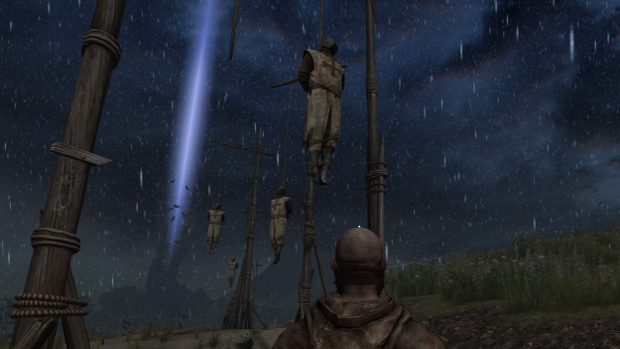 I mean, come on. At some point it just stops being horrific. 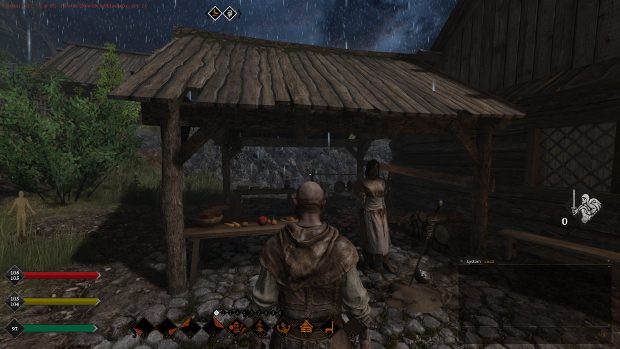 Yeah, that’s a lady cooking away in her outdoor kitchen, just around the corner from a dozen corpses swinging in the breeze. There's even a grave right in front of her.

After a confusing chat with the elder, I rush around the village getting quests. Well, tasks. Dig a hole, plant some crops, make a tool, get some ore - the usual suspects. First, though, a closer look at this great big bloody tower of ships that I probably should have mentioned earlier. 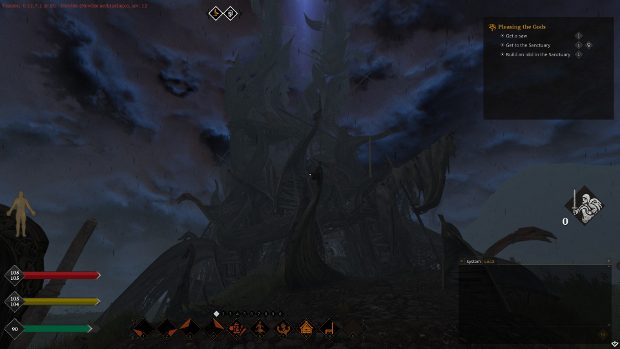 This magical thingamabob contains a chatty statue that offers me a way off the island, but I postpone my trip until I finish all the work I have foolishly agreed to do. I’ve got to make an idol, one of those creepy, ornate poles that are everywhere. That they can be built by players also explains why they’re all over the place. Unfortunately, I’m barely out the door when I’m confronted by a wolf.

I forgot to snap a screenshot, so I've tried to recreate the scene at home. 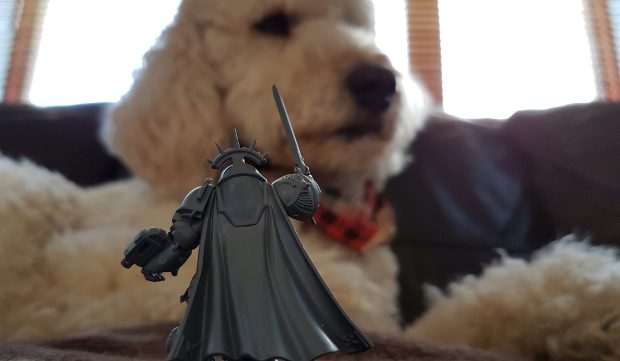 Like a man who has never even heard of video games, I briefly wonder if it's going to attack, and then it rushes at me, snarling. I’m weaponless, decked out in rags and I’ve not crafted anything. It’s hopeless. I flail with my fists, hitting air. My air-punches do seem to be actually hurting the wolf, though barely. I run out of stamina and the wolf just bites me to death. 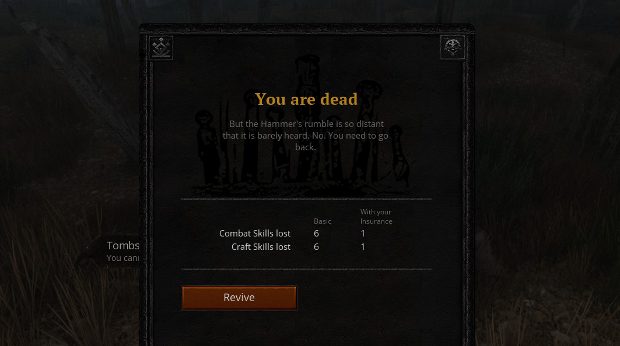 I wake up naked. My only possessions, my beloved rags, now belong to a wolf. I’ve also lost some skill points and I’m now laden with a temporary curse that makes me even more useless than I was in my previous life. More useless than a man who died because he was too tired to fight a wolf.

There’s no way to get to my grave, where I'd find my stuff, without dealing with the wolf, so I just get on with my tasks. This also proves to be a challenge. I need tools, and resources to craft them with, but I have no idea how to find half of what I need. Even wikis and forums prove to be unhelpful, until I realise that the ability to find stuff like plants and flint and ore are all connected to specific skills. I don’t have any of them. 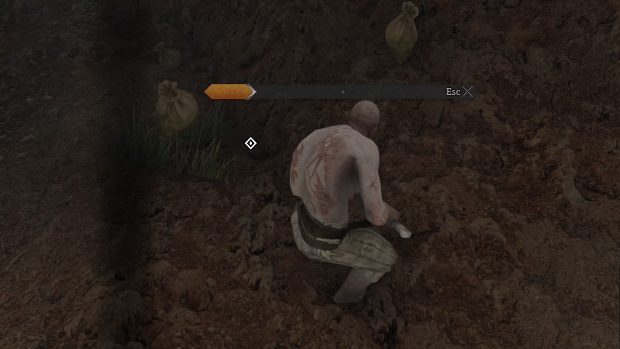 Luckily, doing the few things I can actually do - digging holes, snapping branches off trees - increases my nature lore by one point, enough to unlock the ability to search for stuff just lying around on the ground. I use it for the first time and, suddenly, the ground is littered with plants and mushrooms and huge piles of rocks. This must be what being a botanist or a geologist is like.

Mining is out of my reach, however. The mining skill seems to be pretty far down the tree, at least where I’m at, and my digging skill - the one thing I’m awesome at - isn’t high enough to actually make the mine itself. There are pre-built mines that the task directs me towards, but they’ve actually been placed within the village limits, so nothing can be done inside them. 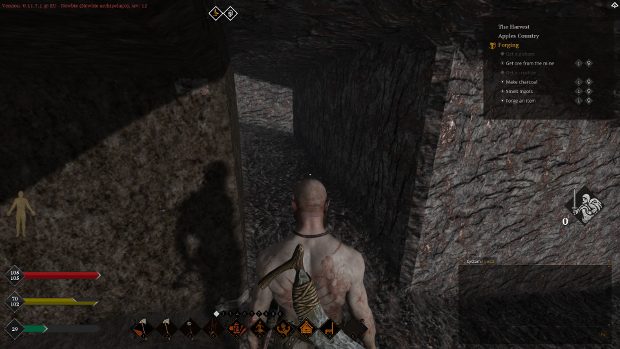 After finishing a couple of my jobs, I realise I’m not actually getting anything for completing them, and as tutorials they’re usually vague and sometimes outright wrong, so I decide to leave for the mainland. But first, I want to say goodbye to an old friend. 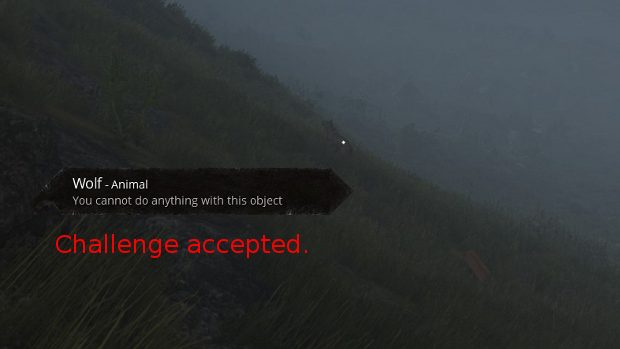 With several weapons at the ready, I feel pretty confident about my first proper fight. I equip my weapon, rush in… and start punching the air.

I’ve equipped my weapon, but it turns out that I also need to ready it. Panicking, because I’m now badly injured, I flee. But not far, because I run out of stamina. The wolf catches up and starts tearing me apart. I run again, until I have to stop because, yes, I’m out of stamina. This continues until I am dead. 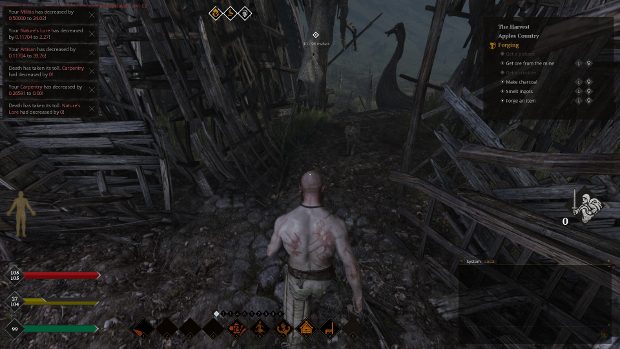 I refuse to leave all of my stuff to the wolf. It's not just rags this time. I try to trick him, forcing him to chase me so I can double back and loot my grave. It seems to work, but my hands are still shaking as I put each item from my grave into my inventory, one by one. The wolf doesn’t return.

The quest tells me to speak with the ferryman, but forgetting that this is the statue’s name, I stupidly go and speak to the ship builder, seeing as he’s the only one standing near a proper boat. That’s when I get stuck in between some small boxes. 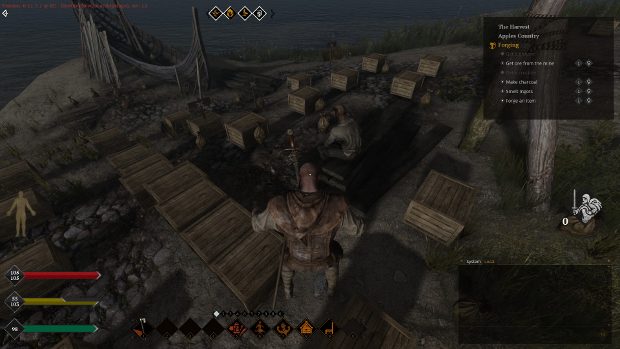 Escaping my box prison, I quickly realise my mistake and head back to the statue - oh bollocks there it is again. 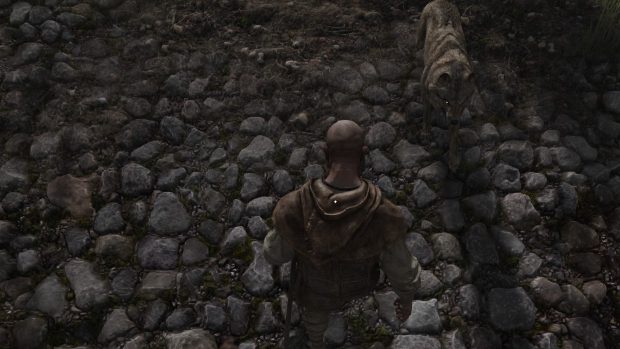 Yes, the wolf has sniffed me out. It’s fine. I have my weapons and I’ve learned from my mistakes. 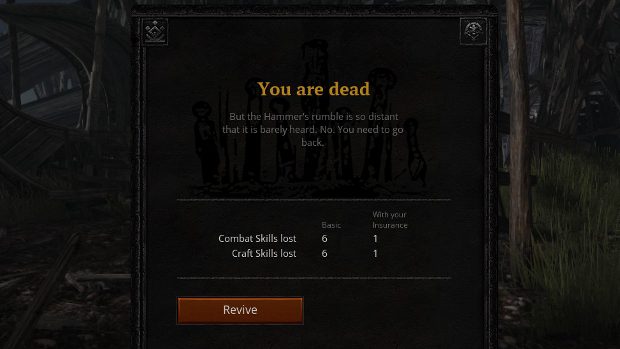 Like a total idiot, I return once more because I’ve spent too long on this dismal island to leave with absolutely nothing to show for it. I need my loot. I need revenge. And for the first time, luck seems to be on my side. The wolf is stuck on my grave, and I can just reach it without being attacked. So of course when I get everything back I hit it. 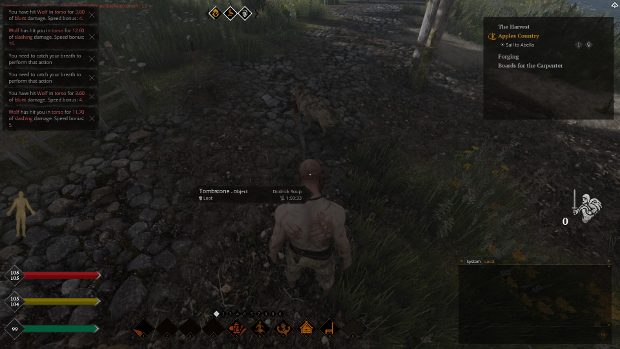 Unfortunately my attack dislodges the wolf, and I rapidly run out of health and stamina, forcing me to retreat. It gets stuck again, but this time I have a better idea than hitting it with my axe. I have a sling and some bullets I found on the ground. So I stand there, for five minutes, launching tiny pebbles at a buggy wolf. I have to charge up my swing to hit him, which is tricky when there’s no meter and I can’t actually see the sling. 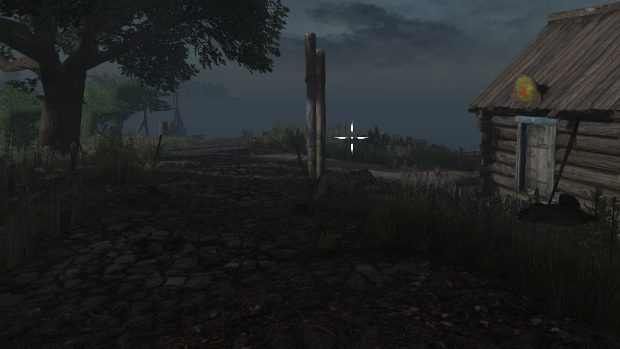 Eventually, my ceaseless barrage bores the wolf so much that it manages to free itself and just wander off. I have all my stuff back and I’m alive. This time I make the smart choice: I leave the wolf alone. I get to the statue and bid the awful island farewell, escaping with at least a few things. 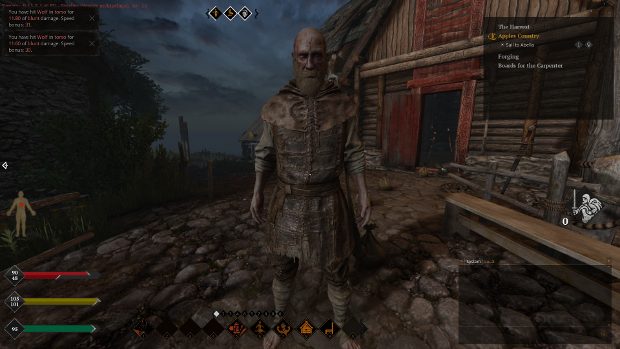 I arrive on the mainland, naked and with a nearly empty inventory.

As the cold water embraces me, I start to wonder if I'm giving up too quickly. Surely Doderick Soup can handle worse than this. But then I realise that there are undoubtedly wolves on the mainland. Plural! The sea is my new home now, for as long as it will have me.