These days I love horror. However, I haven't always been a fan of all things spooky, scary, and skeleton-related. There was a brief period of time (I call this time "childhood") where even catching so much as a glimpse of a horror film would give me nightmares. Then my older brother brought home the game Fatal Frame. As the neighbourhood kids and I watched him play, crowded around our cement block of a television set, our eyes wide with fear, I knew that I would never be the same. I didn't sleep for three nights, hysterical with fear.

And then I was cured. I had the fear burned right out of me. No piece of media has ever scared me so bad since, and I am effectively immune to horror. But I know that not everyone can handle being scared out of their wits! And that's okay. For those folks, Halloween can be a dicey time of year. Is it going to be scary or is it going to be spooky? Never fear, 'fraidy cats: All games listed here are spooky. Not scary.

Graveyard Bones was made over the span of one weekend for the Ludum Dare 45 Jam. In the game, you wake up with no memory of who you are or how you got to where you are: a graveyard, abandoned by the living. Oh, and you're a skeleton. With nothin' but you bones, you are tasked with obtaining all the various body parts required to blend in with humanity: skin, brain, eyes, and blood. Oh, and a getaway car.

The music in this game, frankly, slaps. There is something about good percussion that just screams "skeletons," because of how they're made of bones. I like to imagine the skeletons are playing their ribcage like a xylophone. The gameplay itself is easy enough, though the Chilean studio notes that the controls could use some fine-tuning. All in all, it's a lovely little romp through sepulchers and mausoleums to regain some semblance of humanity.

QT is a modern-day classic. We've covered the game before here on RPS, but if you haven't played it yet take this as your sign to do so immediately. Taking inspiration from the first-person could-have-been teaser, PT, QT takes a hard left turn away from its source material. If PT is a horrifying spectre haunting the games industry, QT is a mischevious little pal who wants to hang out.

QT looks like this: there is a spooky, long, curling hallway. It is very scary. Something goes crash, and you open the door to discover the same hallways you just left. Surely not -- who is that man standing there? Is he... a smiley happy doodle waving hello? Oh, hooray! It is! There are many secrets hiding in QT's hallways, but I don't think any one of them will send you screaming and running for the hills.

The Fastest Skeleton from fromsmiling

The Fastest Skeleton is a glorious little game, where the main conceit is this: what if skeleton platformer, but funny physics. Sold! I'm there! I'm... terrible at platformers! Thankfully, the game doesn't require much skill as far as platforming is concerned, though sprinting your way to the top of the screen is encouraged. For the most part, it is fun to fling your skeletal body all over the darn place and watch your femurs and funny bones go soaring.

It is so strange to be alive, both deeply enchanted and disturbed by the skeleton figures just underneath our skin. But we don't have to get too heady about it. The Fastest Skeleton gets a succinct summary right on its itch.io game page text, which ominously reads:

"CLIMB THE TOWER AS FAST AS YOU CAN. 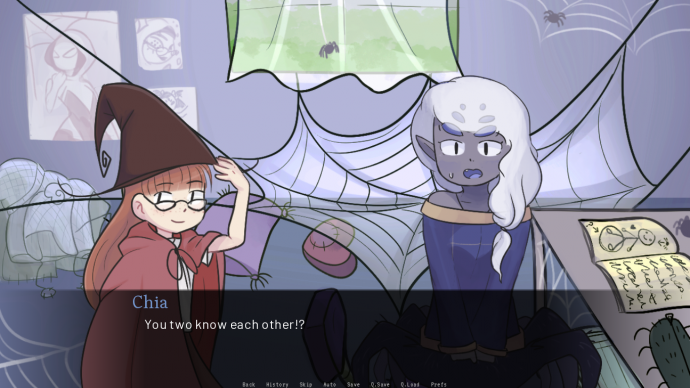 Halloween Hearts is a RenPy-driven visual novel about being the only human in a school for monsters. There are plenty of vampires, spider-people, and sentient slimes waiting to befriend you in an effort to reach human-monster solidarity. Rumour has it you can even date some of them, but I'm more of a sit-by-yourself-in-class type, so I never got that far with any of the ghouls, gals, and/or nonbinary pals. The options are there, though, and the game is almost saccharine sweet when it wants to be.

Halloween Hearts is well-written, cute, and takes about twenty minutes to play all the way through one branch. The ending I got made me more than curious to check out the others, so there might be more here than meets the eye...

It must be pretty lonely to be a ghost.

GHOST is a Bitsy game, made for the 0h game jam.