I've just come back home from travelling, begun a new quarter of my PhD, and I am getting over a week-and-a-half of illness. I am working on a couple of academic papers for publication, getting ready to move out of my apartment, I still have to unpack, and did I mention that I'm still ill? Sometimes it seems like a to-do list is never-ending, no matter how many boxes you tick. Like no matter how many times you do laundry, or do the dishes, or replace the sheets, your clothes get dirty again, the dishes always need doing, and the sheets will need to be replaced again in two weeks' time.

If just reading this has you getting a stress headache, don't worry. We're going to reel back from real-world worries. Take it easy, folks. Play a game that doesn't demand much of you in times of stress or tumult. Play any one of this handful of games to take a load off this weekend.

There is merit to picking something up and being able to do exactly what it asks of you for a definite period of time. No more, and no less. I don't think a game is any more capable of imparting life lessons than any other medium (I'm not here to suggest that a game is going to make your life easier). But there are times when they can help. There are games I have turned to when the going got rough - usually they involve green spaces, soft music, few tasks, and fewer demands.

A Bright Light in the Middle of the Ocean allows you to live out your fantasy of lighthouse acquisition, without financial burden or sunburn. It's a walking simulator set on a small island with a lighthouse, some rocks, some flowers, and not much else. A Bright Light has a lot of substance, despite the few points of direct gamey interaction (lamp: turn on. spyglass: pick up). The day-night cycle is gorgeous, and with a soundtrack from composer Paws Menu, there's a lot to soak in. If it sounds like something you're interested in, you can also check out what Matt wrote about it in 2017. 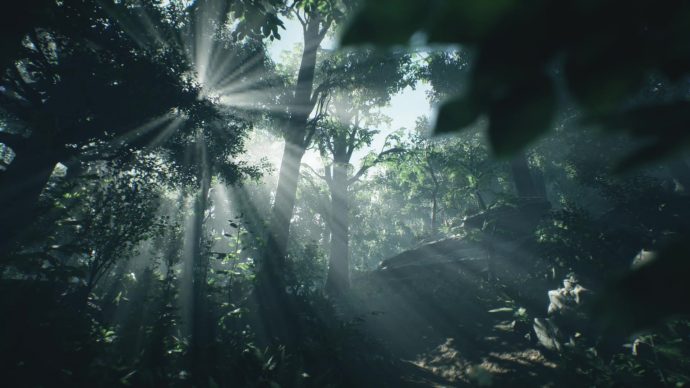 New Zealand Recreation is a photorealistic walking simulator which takes place in a meticulously rendered slice of New Zealand wilderness. The game's itch page describes how the dev went to New Zealand a few years prior, and using photographs they took of the environment there, built an explorable memory of the place. In the game's menu, you can change the environment's lighting and switch the game's soundtrack around. It's a gorgeous piece of work.

I spent a lot of my time growing up in the outdoors. Even though the game is described as being a recreation of New Zealand, I can't help but splice in a few of my own wilderness memories of the Appalachian mountains in early morning light, crisp cool springs, and getting lost in verdant underbrush.

Tenderfoot was a submission to the 2017 Utopia Jam from Bardu -- a current member of the democratic games label Ice Water Games. For the Utopia Jam, creators were asked to imagine a better future. Here, in Tenderfoot, utopia is a quiet windowscape full of greenery looking out and onto a skyscraper. Perhaps it is a postapocalyptic scene, where colour fogs up the glass and plants sway back and forth in the foreground. But perhaps it is simply a small porthole window in the city from an apartment full of potted plants. Tenderfoot doesn't ask too much of you, so don't spend too much time trying to figure it out.

As the day creeps by, the scene in Tenderfoot will reflect your time of day. If you lack access to a window with daylight (as my office does), try keeping it tucked in a corner of your desktop. Watch birds fly by in the distance. Maybe it will help make things a little easier. Then again, maybe it won't.

I hear that playing the drums is a good stress reliever, but I've never had an opportunity to test the theory. I think it's probably some form of performance anxiety. I want to be good at an activity if that activity is a stress reliever. I don't have access to a drumset, and I was never terribly interested in popular late-2000s videogame Rock Band. Thankfully, there's Beat Beak from itch dev Iodine, where I can finally live my truth. Beat Beak's itch page describes the game as "a 'game' about taking out your frustration on a set of drums. Also, you are a goose." Amen. Amen! Finally, I am an angry honking goose on the drums and you can be too.