It's been just over a week since GDC announced that it would postpone its annual conference until "summer" of this year as a response to the Coronavirus. I live in Los Angeles, where city officials have just declared a "health emergency," and work at a university full of grubby-handed students. I understand the global reach of the pandemic panic. Many developers were caught off guard by GDC's cancellation, even with the mounting number of big names pulling out of the conference. These studios and developers will be feeling the fallout of the postponement well into its summer reprise. Independent developers who operate without the security net of a big publisher, however, have been disproportionately affected.

Many relief funds have cropped up in an attempt to mitigate the sunk-costs of nonrefundable flights, hotel rooms, and ticket costs. Flights, hotels, and tickets aren't the only costs lost, however. Exposure doesn't pay the bills, but it sure does some good work for getting there. In an effort to help lift up some independent devs, here's a small handful of games from those who have been affected by GDC's cancellation.

Turnip Boy Commits Tax Evasion tells the story of Turnip Boy, a reckless criminal who has been evicted from his home by the evil Mayor Onion. He's evaded paying his taxes, which is a crime. In order to move forward in the garden and in life, he must solve various puzzles and fight corrupt politicians. The game takes a page from Link's Awakening (and other top-down Zeldas), Stardew Valley, and a hint of Tumbleseed. The game is cheerful, if a bit twee, but still manages to provide slick gameplay and gorgeous pixel art. TBCTE has seeds of revolutionary politics in it (tear up the rules on taxes! tear up your wanted posters! seize the means of gardening production!), and that includes the literal seeds. The game's core mechanics revolve around both gardening and swordplay: water the seeds you find, and you can get anything from extra lives, weapons, and access to secret locations.

The team behind Turnip Boy Commits Tax Evasion has had a solid conference season, GDC aside. They showed the game at PAX East just after winning the grand prize at the MassDIGI ninth annual game design challange. The game is just a demo for now, but there's still a whole slice available to play and enjoy. Oh, and the music from the duo over at flowerblvck absolutely slaps. 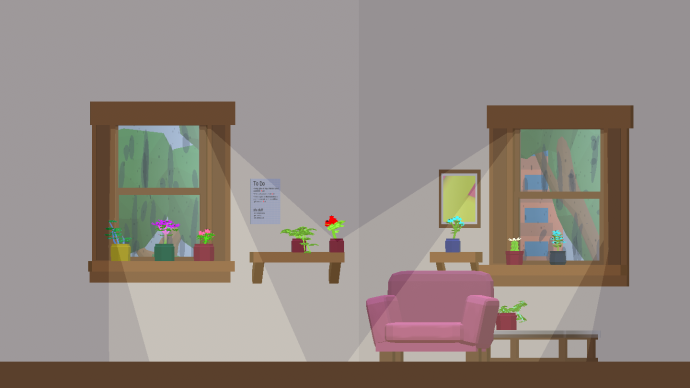 I'm a big fan of games where you plant flowers and then just hang out with them, or which simply don't require a lot of input from me. I love video games, but I love not doing anything at all even more. For example, I am a longtime fan of Ice Water Games' Viridi, and I once wrote an entire column dedicated to games about plants. In Plant Daddy, you are a Plant Parent with a nearly endless income. This is because in Plant Daddy, your puny Earth money has been replaced with Leaves and Blossoms. Finally!

One of Plant Daddy's best features is its soothing soundtrack of wind, rain, and little chirping insects. There are any number of additional details which add to Plant Daddy's charm: you can name your plants, your to-do list updates with small in-game tasks as well as your player-character's IRL chores. The game moves pretty slowly, so it's worth it to keep it running in another tab while getting other tasks done. The calming sounds of nature might help you keep your head on straight while you wait for your plants to propogate so you can exchange their offshoots for more plants, furniture, and shelves to put more plants on. Sure, you have to ensure that your plants are getting the right amount of light, their pots aren't too small, and they're receiving enough water. Overall, though, it's a very chill way to care for all the plants you have neither the space nor time to have in your real-life apartment.

Pre-Shave is a personal game about the developer's experiences shaving as a brown man. In Pre-Shave you assume the role of Pahlavan himself, prepping to leave his house. Before he can leave, of course, he must ensure that he is clean shaven. And, as we all know, shaving is an awkward endeavour for even the most agile among us. So it only stands to reason that the game borrows from QWOP/Surgeon Simulator physics to make damn sure that you have a difficult time shaving all that chest hair. Once you feel like you have appropriately removed all the unsightly hair from Pahlavan's body, it's time to go. Give the game a play to find out where, if you haven't guessed it already.

Pahlavan's game comes at an especially poignant time, given GDC's relationship with an overarching political and geographical climate. Many developers, both domestic and international, have criticised the conference for continuing to take place in San Francisco. Getting safely to America is no easy task for many folks, and even once past that hurdle, the conference is right in the heart of one of the most expensive cities in the country. I don't think it's a sustainable place to hold a conference with an international reach, and time will only tell what happens to GDC from here. I hope that, in the meantime, all the devs who counted on getting an audience at GDC manage to find it somewhere else.

If you're looking for more great zero price games to play, hit our list of the best free games.