If you click on a link and make a purchase we may receive a small commission. Read our editorial policy.
Quantum League review
Quantum League is an excitingly original multiplayer first-person shooter in which time repeats every 15 seconds, allowing you to collaborate with past selves.

Each fifteen seconds of a match of competitive FPS Quantum League repeats, creating its own timeline of player actions which persist until the end of the third run, or until that timeline is interrupted by the actions of a player in a subsequent run. It’s Clock Blockers, basically. Sometimes, you pull off supremely tactical synchronized plays with versions of your past self. Sometimes, you have to spend your third run killing your second run to stop yourself accidentally blowing up your first run with a grenade launcher. I like it a lot, even if I’m not sure I can adequately explain it.

Once more for the people in the back, one of which happens to be me from a future timeline where I still haven’t worked out the best way to sum things up: if the Grandfather Paradox comes down to “If you go back in time and kill your grandfather, would you cease to exist?” Quantum League can be clumsily summarised by the much lengthier question: 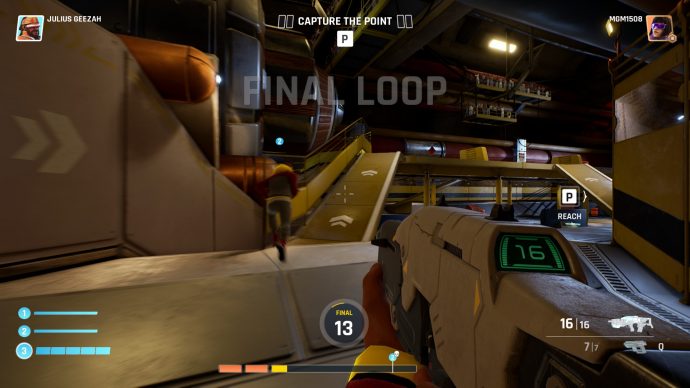 “If my third run headshots my opponent’s first run before my second run gets caught in the crossfire between both our first runs and killed, will my second run make it to the victory point in time? but then what about their third run? Should I just spray wildly in the direction of the victory point and hope for a tie? What even is time?” and then your head starts shaking and you get a nosebleed.

Developer Nimble Giant have described the design impetus behind their game as “adding perfect information to the FPS formula.” Just quoting that makes me all excited, and then a bit cautious, and then mostly quite excited again. Either way, it’s a good focal point to ground any attempts I might make to describe what’s happening here.

There’s currently two types of matches available, with 1v1 and 2v2 variants of each. There’s a point capture mode where you’ll have to be the only team with any of your runs ending on the victory point to win. There’s also a deathmatch mode, where the team who ends the third run having killed the most versions of the opposing team wins. 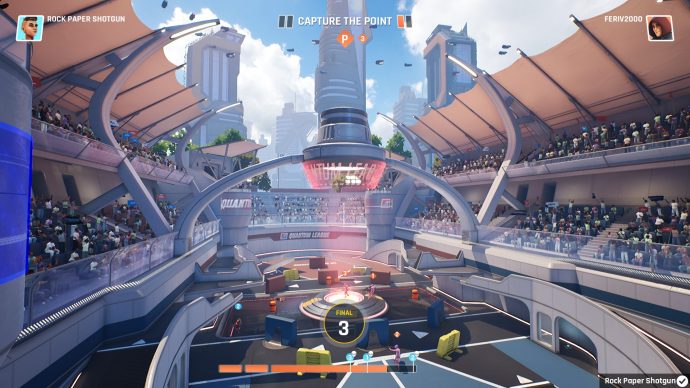 Things are further complicated with the addition of life pickups. If you’re low on health, they’ll simply restore you to full. But if you’ve been killed, they'll allow you to travel around and shoot as normal for the remainder of the fifteen seconds, recording actions that - and this is important - will happen if you can prevent that version of yourself from being killed in future runs. The easiest way to do this is to kill the player that killed you, but you can also bodyguard-leap yourself, if you're up for a laugh. Also, if you can collect a life pickup in this ghosty paradox mode, you’ll be respawned, scrubbing your original death from the timeline.

It all results in the strange sense of fighting a player accompanied by bots, but bots that don’t know you exist, and are also somehow more and less smart than normal bots, and every time you kill one of these not-bots you get the feeling of outsmarting a human being. 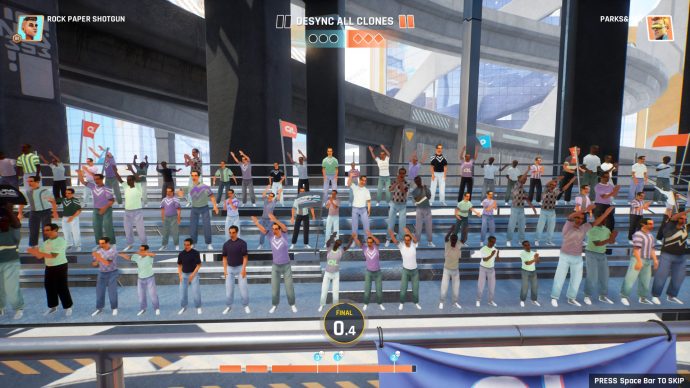 It’s all uplifted by a presentation that initially feels a bit uninspired, but that I came to appreciate. Sometimes, at the start of a match, the announcer will say something like “let’s have a good, clean game”, and ‘clean’ is honestly the best word I could use to describe Quantum League’s whole deal. It presents most like a sport that just happens to use guns, rather than something trying to emulate violence. It’s quite refreshing, actually. Not gritty in the slightest. It’s taken gritty aside, given gritty a pep talk and an orange slice, and told it not to let the world grind it down.

This extends to a selection of weapons picked for pure functionality rather than any Clancy-esque salivating over bullet calibers and iron sight shapes. Sniper. SMG. Pistol. Grenade Launcher. Shotgun. And uh, laser beam. One of each, no frills. They’ve all got their uses, although the SMG is more like what I’d traditionally think of as an assault rifle in terms of range and accuracy, and is by far the best all rounder. 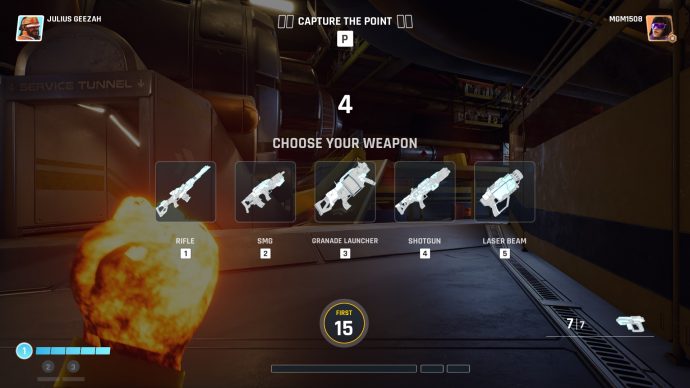 There are, as far as I can see, two major factors holding the game back from consistent greatness. The first is that the grenade launcher can wipe out everyone on a victory point in a single shot, allowing the losing team to reset the match at the last moment, and continue to play in perpetuity until one side gets sloppy in some bastard long war of attrition. The second is - and I’m sure this will change as the player base expands - most people are creatures of habit. In two vs. two especially, unless both teams are at least a bit inventive about taking advantage of the time manipulation, things can just end up as a competent but unremarkable deathmatch.

You get out what both you and your opponent put in, essentially. Go up against a more skilled opponent, someone that forces you to adapt, and you’ll be caught between elated satisfaction and pure appreciation that you're playing something this different, and yes, this bloody good.

All my other complaints are relatively minor. Matches end unceremoniously, for example, showing a skippable replay, a brief victory screen, and then throwing you back to the main menu. You only need to click once to get back in, but since there’s plenty of unlockables already, a quick emote screen so I could congratulate my opponent on a good match wouldn’t go amiss. There’s also no melee attack, as yet. Maybe it doesn’t work with the time stuff for some reason, or maybe I’m being greedy, asking for the option to flatten noses with a rifle butt when they already gave me time travel, but being able to hit things that are close to you is a Video Game Promise™, and I like having the option. 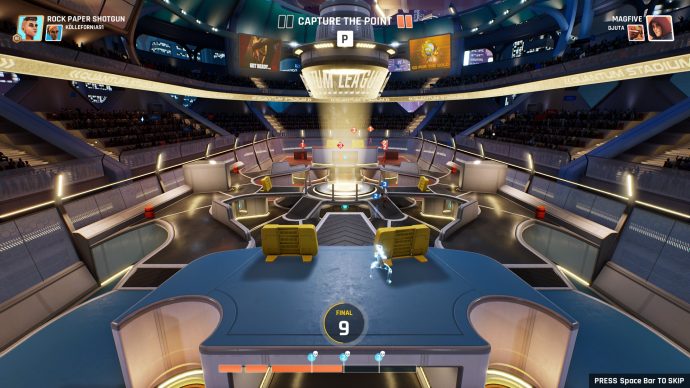 All that aside: gosh, it’s exciting to play something new like this. I’m sure they’ll be some venerable chronicler of the medium who can tell me in the comments where this has been done before, and I even turned up an in-progress Clock Blockers-inspired Garry’s Mod mode while writing this. But it’s certainly the first time I’ve played anything like it.

Am I going to make a grandiose claim like “Quantum League is the Portal of Competitive First Person Shooters?” No. That’s far too much responsibility. But I am going to leave that line unattended while I go make a hot beverage just in case it sways anyone, because Quantum League is a delightfully inventive, smart, and surprising gem. I’d love to see a future where not just competitive FPS fans, but anyone with an interest in game design has at least given it a go. I also wouldn’t mind seeing a future where they nerf the grenade launcher.