Ultimately, Rainswept has a good story to tell. A sad story, one of grief, loss, murder and small-town cruelty. It's a crime procedural, but its forensic examination is of a complicated and difficult relationship. It's a game that touches on difficult topics, including childhood abuse, domestic abuse, and suicide. And yet, perhaps quite extraordinarily, it's also ultimately a game about hope.

I say "ultimately", because it's also a game that gets in its own way. By the end, I really appreciated having been told the story. I'm really glad I played it. Along the way, I was frequently frustrated by a lot of its decisions. 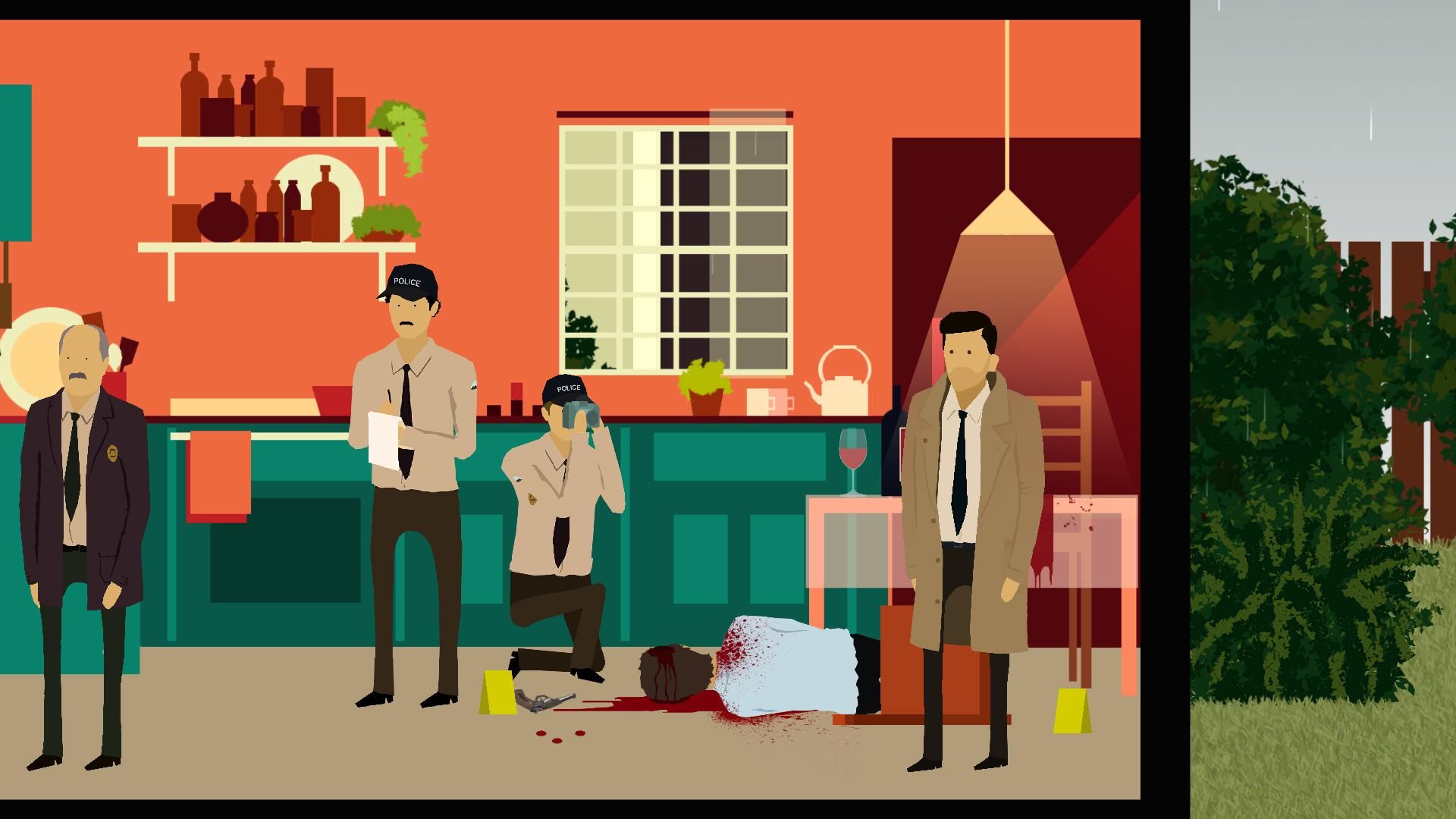 Rainswept is, I would argue, a visual novel. The moment I accepted that, rather than being frustrated by its not being an adventure game, I began to appreciate it for what it is. I'm not entirely to blame for that, either - the game goes out of its way to imply point-and-click features, with options to look at objects in the world, even collect some inventory objects (although you don't actually have a visible inventory). There's even a puzzle! Just one, involving getting a motorboat working. But forget all that, let it be what it is: a game telling you its story, with a fair few opportunities to influence the telling through dialogue choices.

Detective Michael Stone is brought into the small town of Pineview after the apparent murder-suicide of a young couple, Chris and Diane, a pair relatively new to the area, who everyone will tell you, never fit in. Stone suspects there's foul play, and, teamed up with local rookie cop Amy Blunt, sets about defying the local authorities by trying to get to the bottom of a case they want swept away. 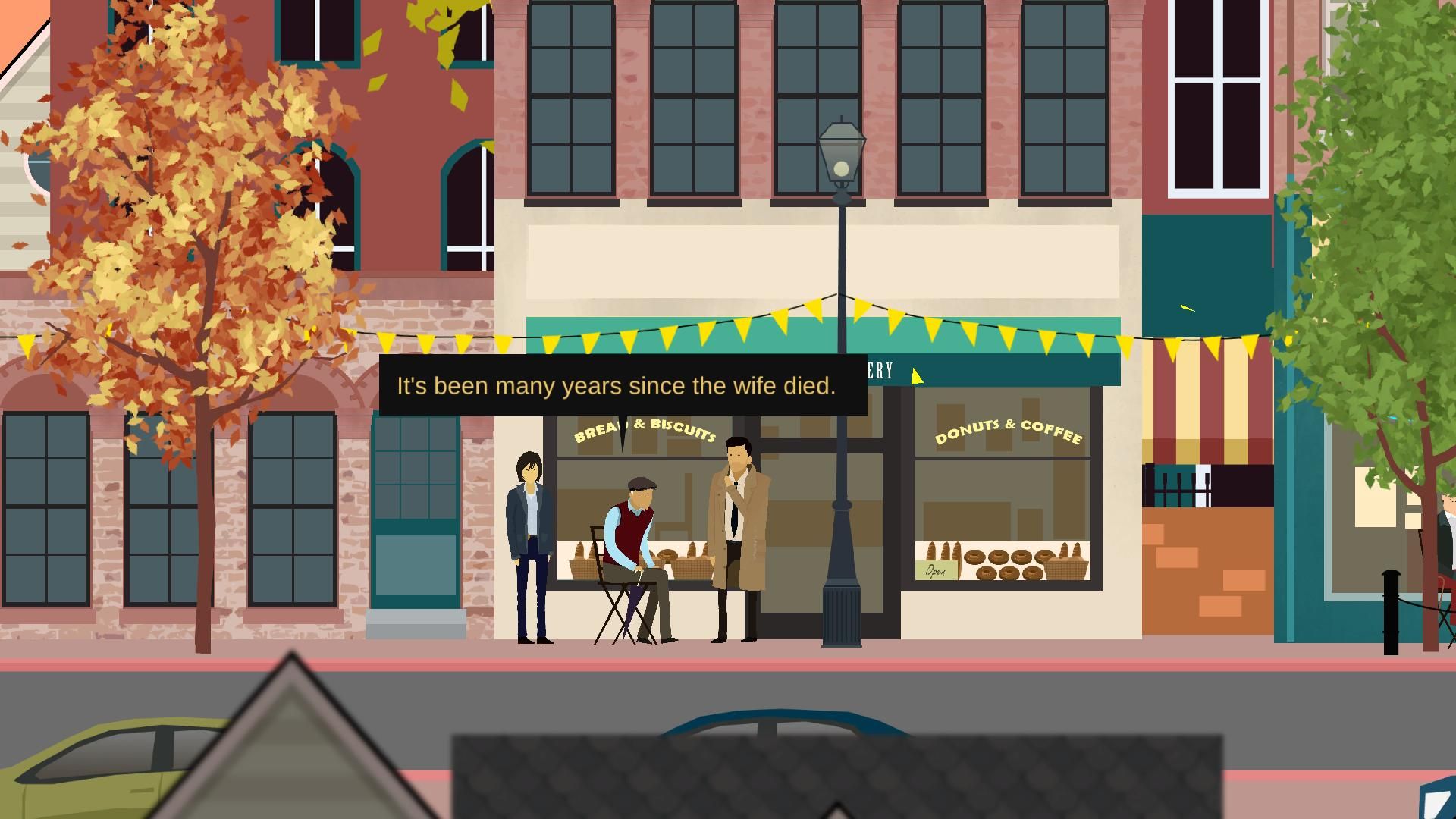 To do this, you primarily march about town, talking to the locals, finding out everyone's whereabouts, sniffing around crime scenes, and enjoying a cup of coffee at the local store. And march about you certainly do, thanks to the game's somewhat unfortunate similarity to a South Park Terrence & Phillip cartoon. I cannot understate how much the rectangle limbs flapping about constantly reminded me of that oh-so accurate depiction of Canadians, and it's only for the sake of their heads not being sliced horizontally that there was any difference.

Rainswept's aesthetic choices are... mixed. The backgrounds are often very lovely, and it does a surprisingly good job of creating an atmosphere with such boxy art. But the character movement is farcical, and really rather undermines the severity of much of its tone. It's extremely difficult not to shout "TERRENCE! DER'S BEEN A MURDER!" at the screen. Although so much of this is counteracted by something that almost never gets a look-in in the world of videogames: direction. It's a beautifully directed game! The camera movements are clever and communicative, it uses long-shots and close-ups to enormous effect, and deeply embellishes its storytelling through an element most games just forget is an option. 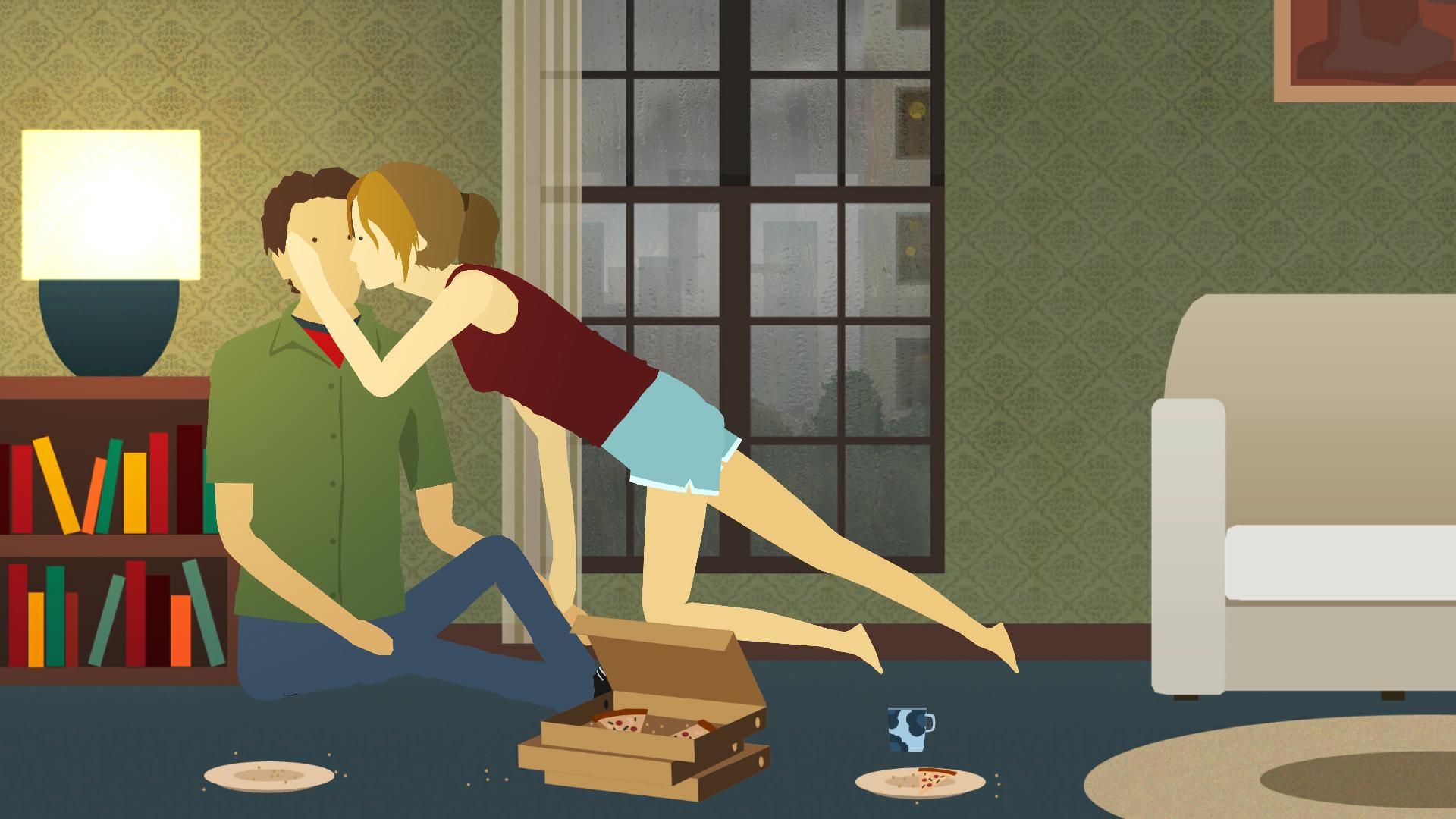 My main issue is, however, how it's controlled. It's horrible, honestly. It's a 2D game, your character moved by A and D, but the mouse used to click on interactive items. To interact with any objects in the world, you have to move your Stone to be standing immediately next to it. Then the pop-up button appears. There's no good reason for this, this was always a horrible thing when adventures did it in the 90s, and it's just as horrible here. Not least because jiggling back and forth to find the exact right spot to let me click on the 'look at' button over an item is often frustratingly fiddly. What's the point of having a mouse cursor if I can't just sweep the screen for objects, and then have the character jog toward them?

Even worse, to change locations you have to walk, or run, until you're stood in exactly the right spot next to a street sign, then interact with it, the 'use' it. Often times you'll have to laboriously jog down street after street after street to get to your location, juggling the crappy map to try to work out which side-streets you need to use to get there, and then jog the whole return journey back. I understand why it doesn't want players to be able to quick-travel with the map, because oftentimes it's important to stop to chat to people on your route. But it makes things so flipping clumsy and slow. 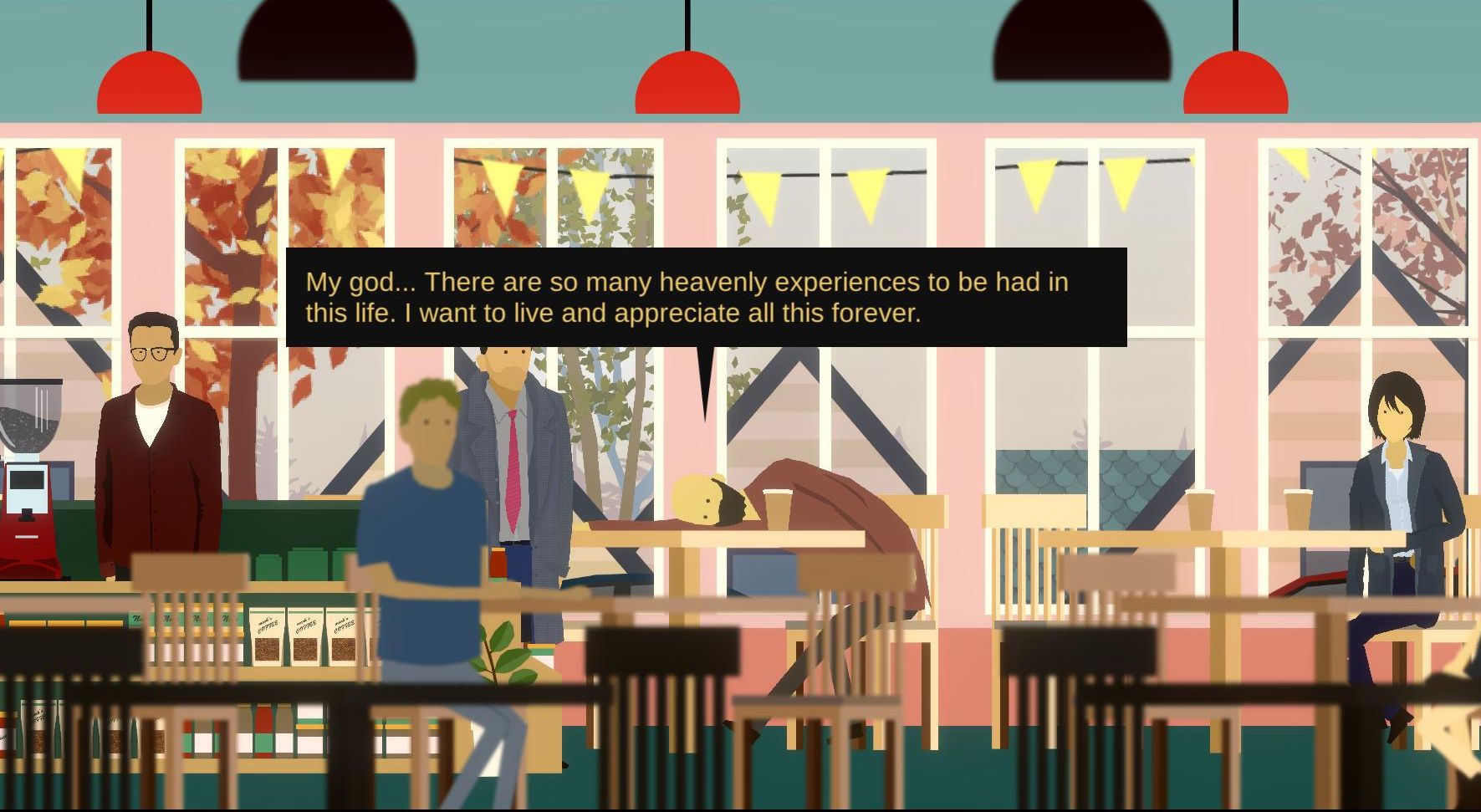 There, that's out my system. It's important, because the issue is pretty fundamental. But now we can get on with why I ended up being really glad I played this. I'm wary of there being quite so many games just now that use topics like abuse and mental health as storylines, especially when they're plot devices rather than a developer's exploration of their own experiences. So I was worried when Rainswept made it clear it was going in that direction, especially regarding suicide. But in the end, I felt it handled these subjects sensitively, maturely, and perhaps most of all, not mawkishly.

Rainswept features a lot of broken characters, people with traumatic pasts, some merely hinted at, others deeply explored. And that includes our character, Stone, who is haunted (perhaps literally?) by the death of his wife. So much of this game is an exploration of his grief, in literal and metaphorical ways. But what I liked so much about this is it didn't piggyback his grief on the back of the central murder mystery - they were distinct, two concurrent threads in the game's story. It never felt cheap, always earned. 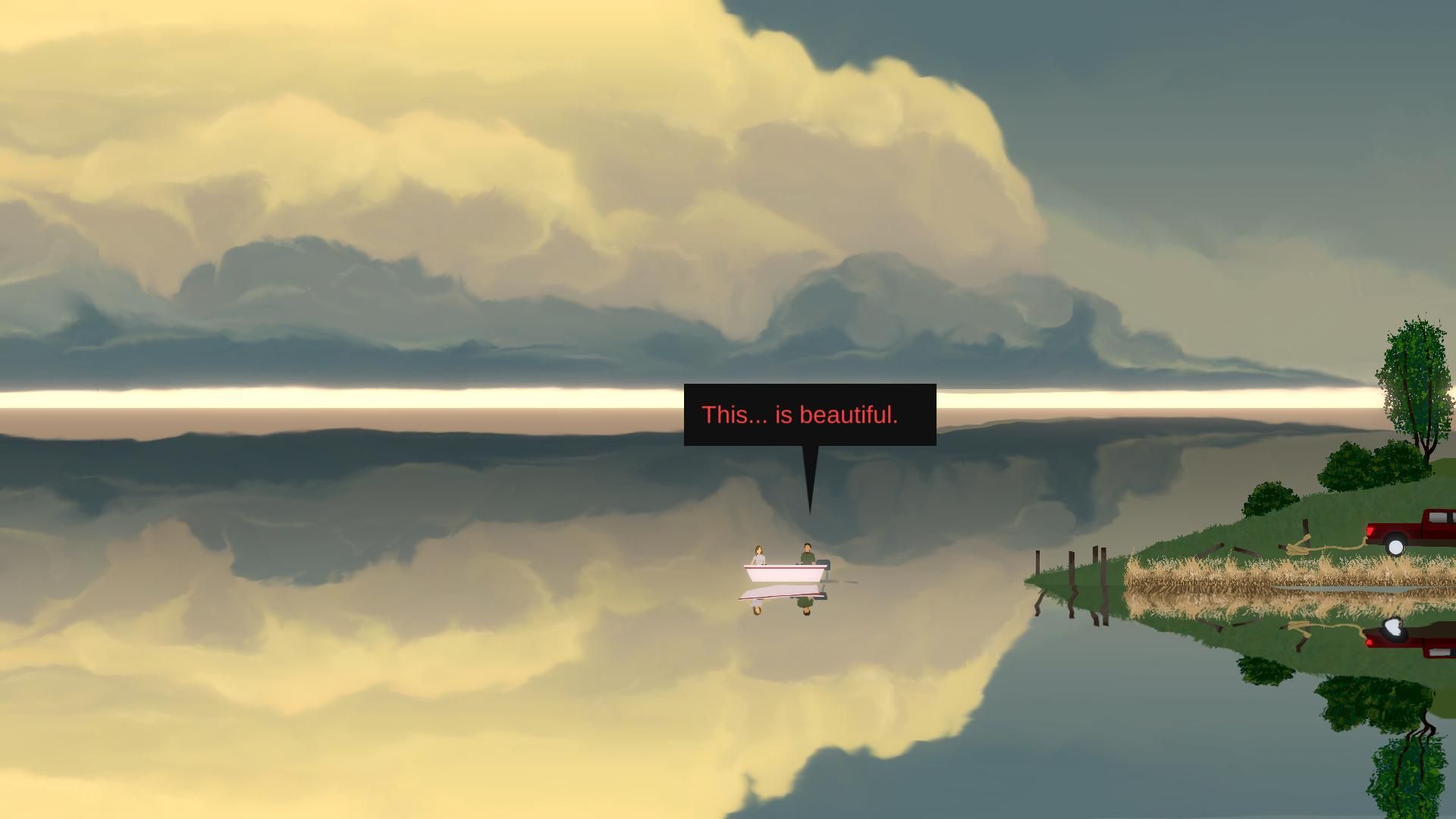 I also really appreciated just how much care went into giving the victims an identity. At the start, like the locals of the town, you know almost nothing about these two. But by speaking to everyone, getting the snippets of information each character has, you start to piece together a relationship of enormous complexity. A fractious, challenging relationship, loving yet toxic, where there are no clear "goodies" or "baddies", but rather two damaged people trying and failing. Much of this is told in extended flashbacks, where you play as the couple in vignettes from their past, and gradually piece together their lives. It's delicate, and often superbly well written.

Also splendid are the little interactions you have with characters about the town. My favourite is the man in the coffee shop each morning, who, head sideways on the table, stares at his mug of tea in a mixture of wonder and disbelief. His philosophical musings are a complete joy. In this way, and a few others, the game reminds me of Night In The Woods. It follows a similar structure of exploring the same town over multiple days, your conversations on one day having an impact on the next. And there's lots of it, making the town feel vivid and lived in. 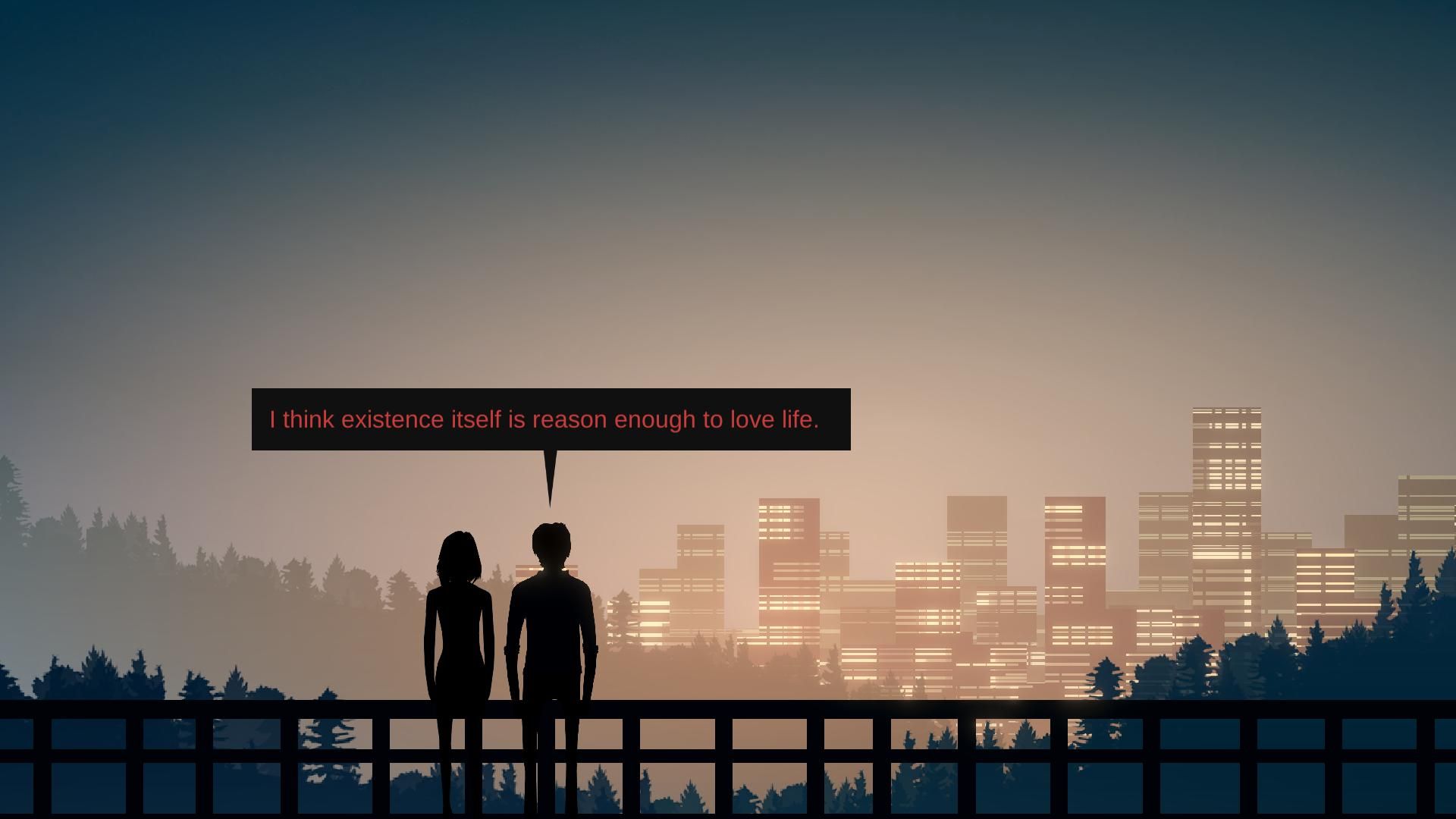 It's a sad tale, and one that comes with a healthy number of content warnings. But it's sensitive with it, without ever being cloying or tacky. And as I said, it's also a story of hope, or the potential of moving on -- or at least, for some. I'm really pleased I played this, and I was completely absorbed by the story. I'm not entirely sure the mystery's resolution tracked, but it's telling how minor a part of the whole experience this became. I dearly wish it were less annoying to play, not requiring mouse/keyboard controls, and then taking advantage of neither. But overall the story made the annoyance worthwhile.