If you click on a link and make a purchase we may receive a small commission. Read our editorial policy.
Developer: Weappy Studio
Publisher: THQ Nordic

It’s interesting how often cops crop up as heroes. Not unsurprising, as the fantasy makes sense in a macho, often politically dubious sort of way. It's not one of mine, however. As such, I'm glad Rebel Cops steps away from it a little. In this turn-based, tactical, XCOM-ish spin-off from This Is The Police, your cops are indeed rebels, rallying against systemic injustice. Admittedly, it's injustice that stems from the corrupting hands of criminal underlords, rather than those that hold power in certain real world police forces. But I don't hold this against the Unapproved Fuzz. They've got far too many other problems.

First and foremost, a shady Russian has the authorities on his payroll, leaving just your ragtag group of insurgent po-po to hunt him down and save the town. The writing is as shaky as you might expect from the premise, leaning hard enough on cliché to make me seriously worry about cliché's structural integrity, and I confess I didn't pay much attention to the Russian, or exactly how my cops batonned, stabbed and shot their way towards him.

The town was definitely worth saving, though. It's a pretty place in rural America, with a smudged, almost impressionist bent to the bushes and dirt, contrasted against unambiguous buildings. You see it all through a haze of snazzy, minimalist iconography that does away with numbers and excessive description. It's an easy language to learn, with information tucked away in menus that blossom out as you hover over crook and cop. Want to hold that man at gunpoint? Here are the chances he'll obey, shown via a simple little bar. Want to club him unconscious for a couple of turns? Knock yourself out.

But there's our first wrinkle. I dig how you can tell any suspect to freeze, and that the odds of compliance are dictated by distance, the arresting officer's fearsomeness, and whether or not you're in the middle of a shootout. I'm not wild about how rarely I felt the need to try, however. The certainty of a melee attack was nearly always worth the extra fuss of getting my brigade into position, and I wasn't nearly invested enough to feel guilty about resorting to a bullet when the situation called for one. I might have, were the writing good enough to make my cops feel like people rather than tools. You're sometimes pushed towards self-serving violence, but in a world of pastiche gangsters I can't count this as commentary on the pressures faced by real police. I don't think it's supposed to be, but if I'm wrong, it falls flat. 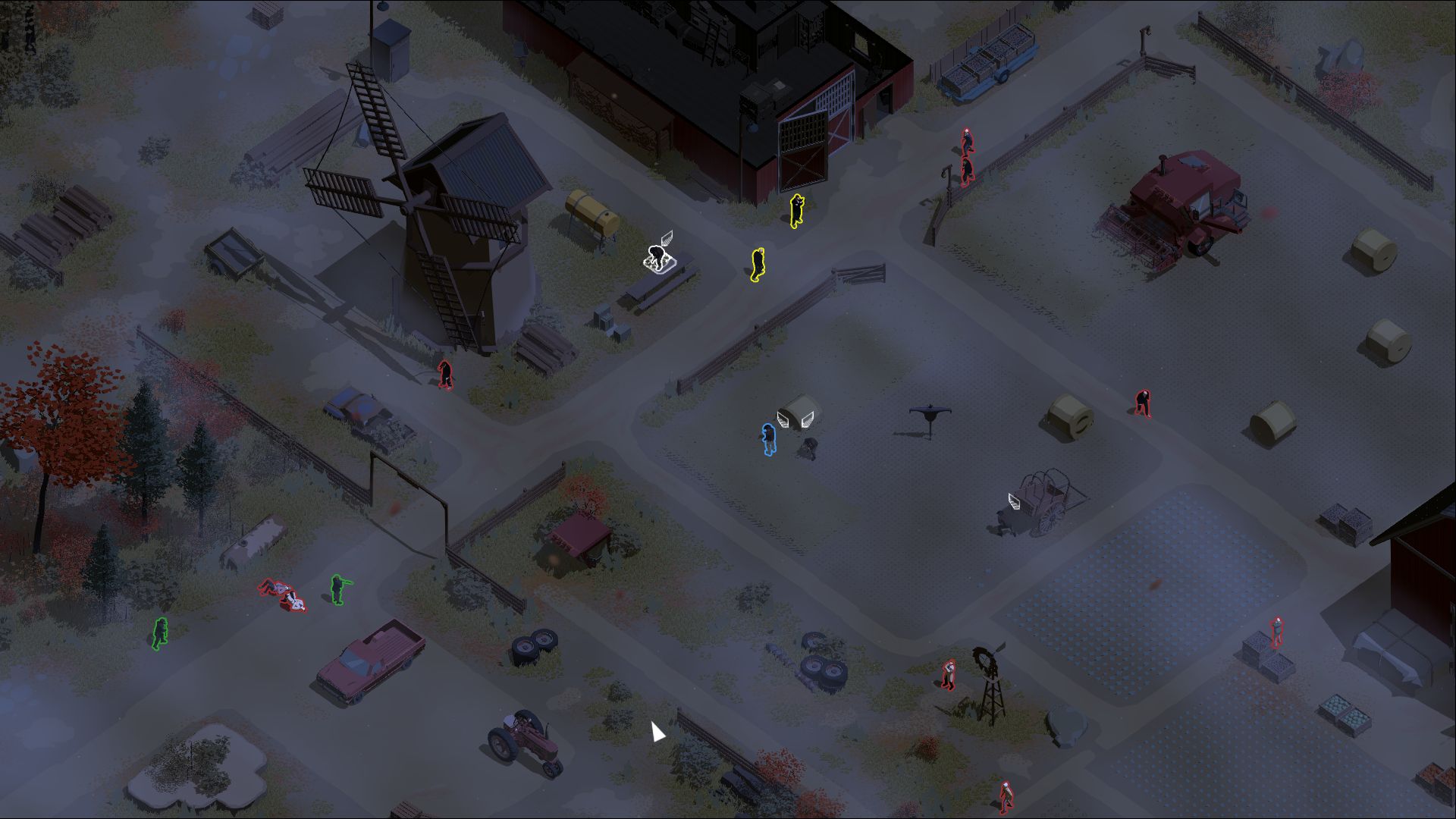 You're also incentivised to follow due process in a handful of other ways. If you arrest someone, they're magicked away from the level by the spirit of justice itself. (They're not, I just think justice ghosts are a better explanation than nothing at all). The important part of this is that arrested crims vanish, rather than continuing to exist as bodies that their buddies might stumble over.

As we all know, arrests are also worth more XP than murders. Your cops progress through levels, and every advancement earns them a choice between two perks, then a pip to spend on getting faster, stronger or more accurate. Those buffs are handy, and help you differentiate between your disobedient pigs. It's neat how they're offered perk options based on how they've behaved, too. A sneaky cop might get to see further, while someone who's been shot at can get better at dodging. All my officers got that one.

Shootouts are quick and quite literally deadly. There are no hitpoints. Instead, every unit can be shot in the head, chest, arm or leg, with appropriate consequences. A bullet to the leg will stop you moving, one to your gun arm will stop you gunning. Both will see you bleed out in six turns, or three if you get hit in the chest. A headshot means instant death. 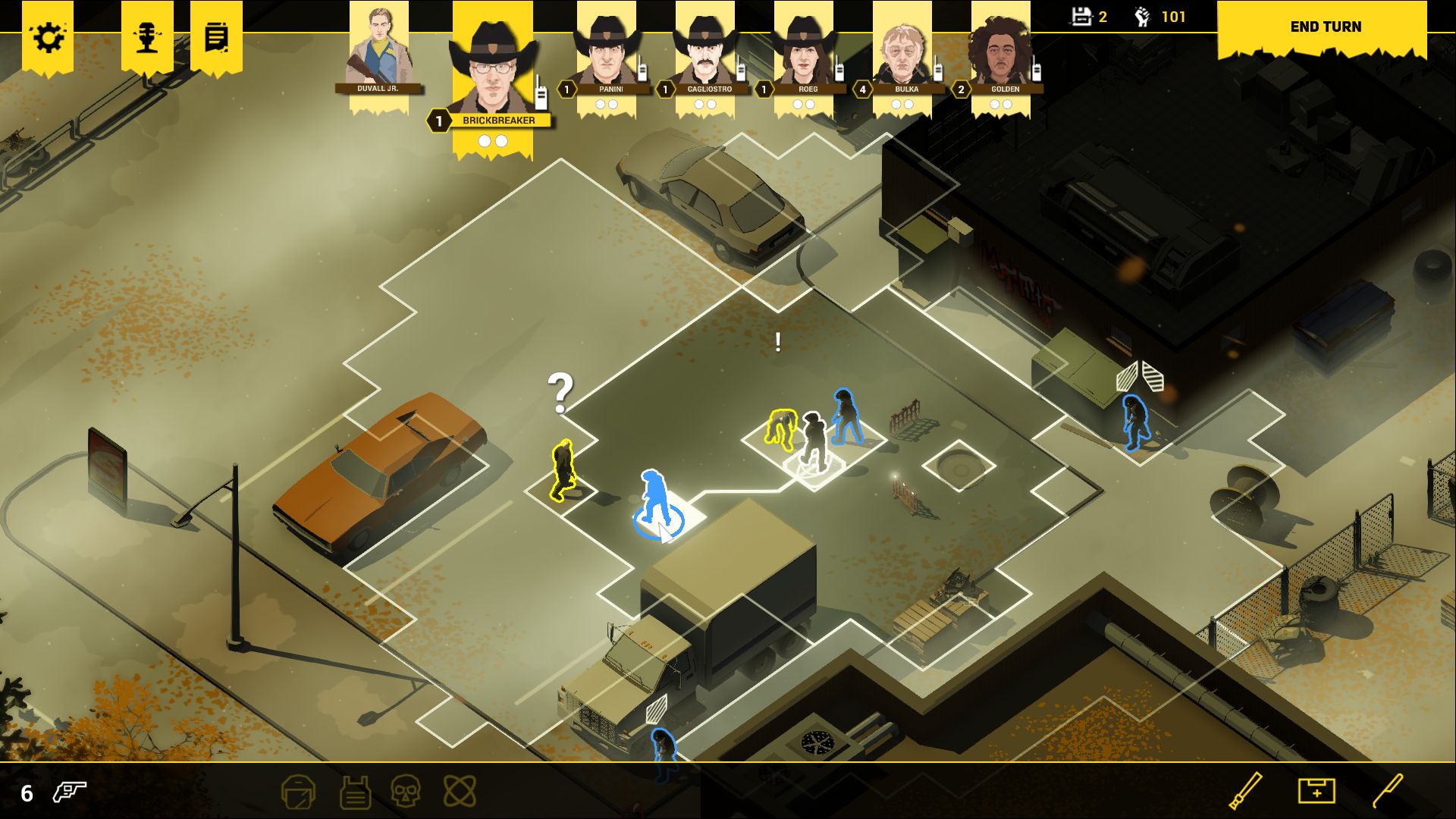 As with the gunpoint idea, it's an interesting system that's largely scuppered by its pointlessness. Most situations call for a chest shot, because that gives you the best chance at removing a thug from the fight - and in most cases, that's all you care about. I also suspect the insta-death headshots sound more appealing than they are. It means your best units can be snatched away from you without warning, unless they're wearing a helmet, and at that point I'd invariably feel compelled to load a save. Oh god. The saves.

For most missions (they are all bespoke and hand-crafted, by the way), you're given three opportunities to save. I get that saving is supposed to be an important decision; a resource that requires careful management. In practice, however, the main resource it eats up is time. The consequences of early discovery or losing my most advanced units always seemed too steep to bear, so I'd grit my teeth and repeat an ungodly number of turns. It's often hard to tell how best to ration your saves, but I reckon I'd struggle even if I had more information. It's like when a game hands you ammo for your super-powerful laser of complete and total destruction, and your brain insists you hang on to it 'in case things get really tough'. 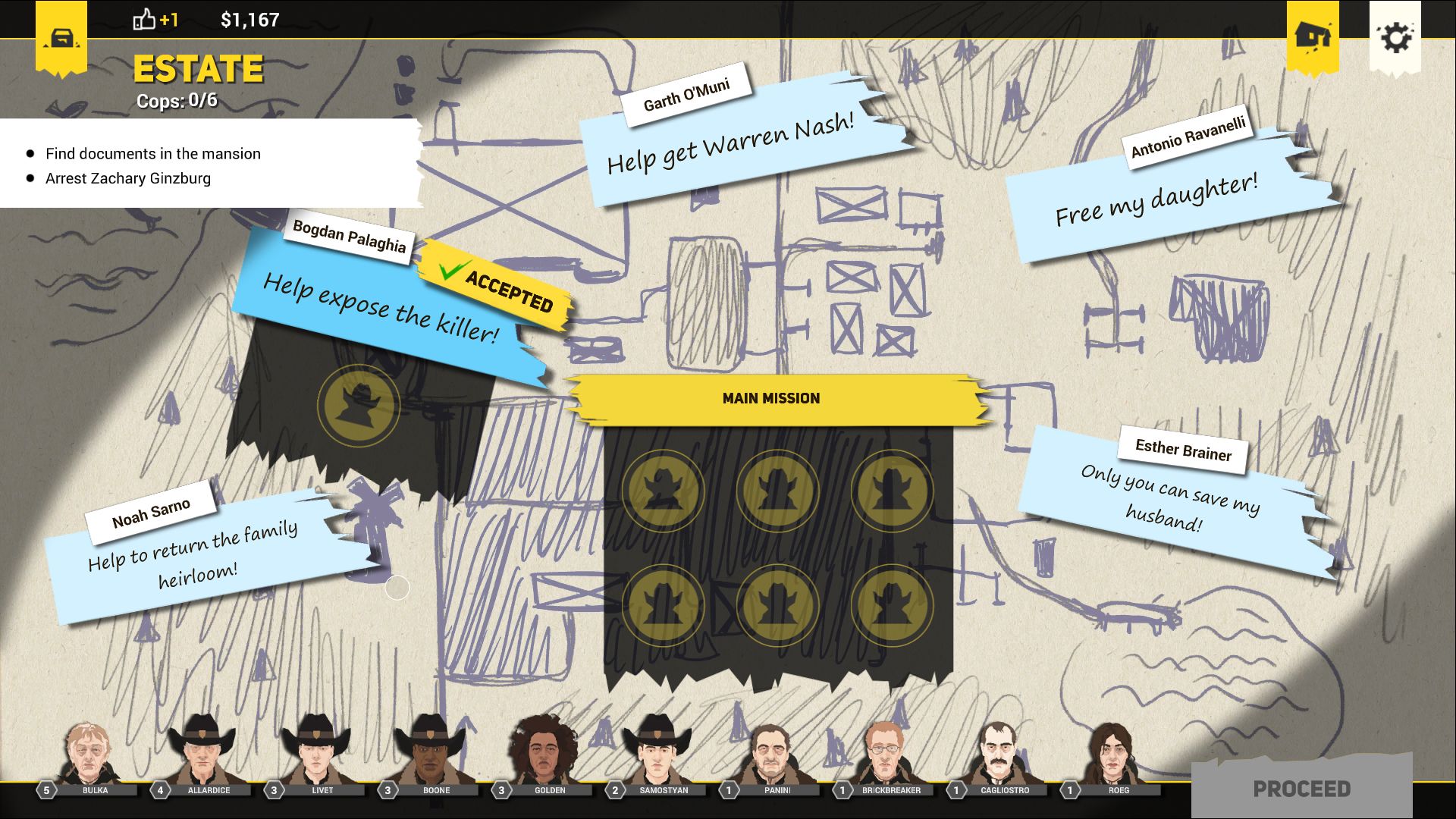 It's worst on the big levels, where you get more saves. They are heartbreakingly large, with side objectives that involve picking your way through buildings in the hopes of finding a harmonica, or a kidnap victim, or something else I didn't care about. The side objectives have different starting locations, so to accept them you have to pop a cop in that mission slot and have them begin acres away from their vital fellow officers. Without support to swoop in and arrest a freshly clubbed criminal, I found those situations far too trying. I'd instead resort to painstakingly manoeuvring my units back into groups, then eventually tackling situations with the vital partner system stealth is designed around.

Your cops, you see, can warn each other when they're about to walk into the eyeline of an unseen enemy. As with the vanishing of arrested suspects, this is done through magic. The spirit of justice must be pulling a lot of overtime. The warnings are somehow both indispensable and not good enough, because if you've already spotted an enemy, there's no indication of whether moving a unit in front of them will trigger their suspicion, or alert them outright. For all my other problems, it's this ambiguity that's truly the Cheeky Lawmen's downfall. 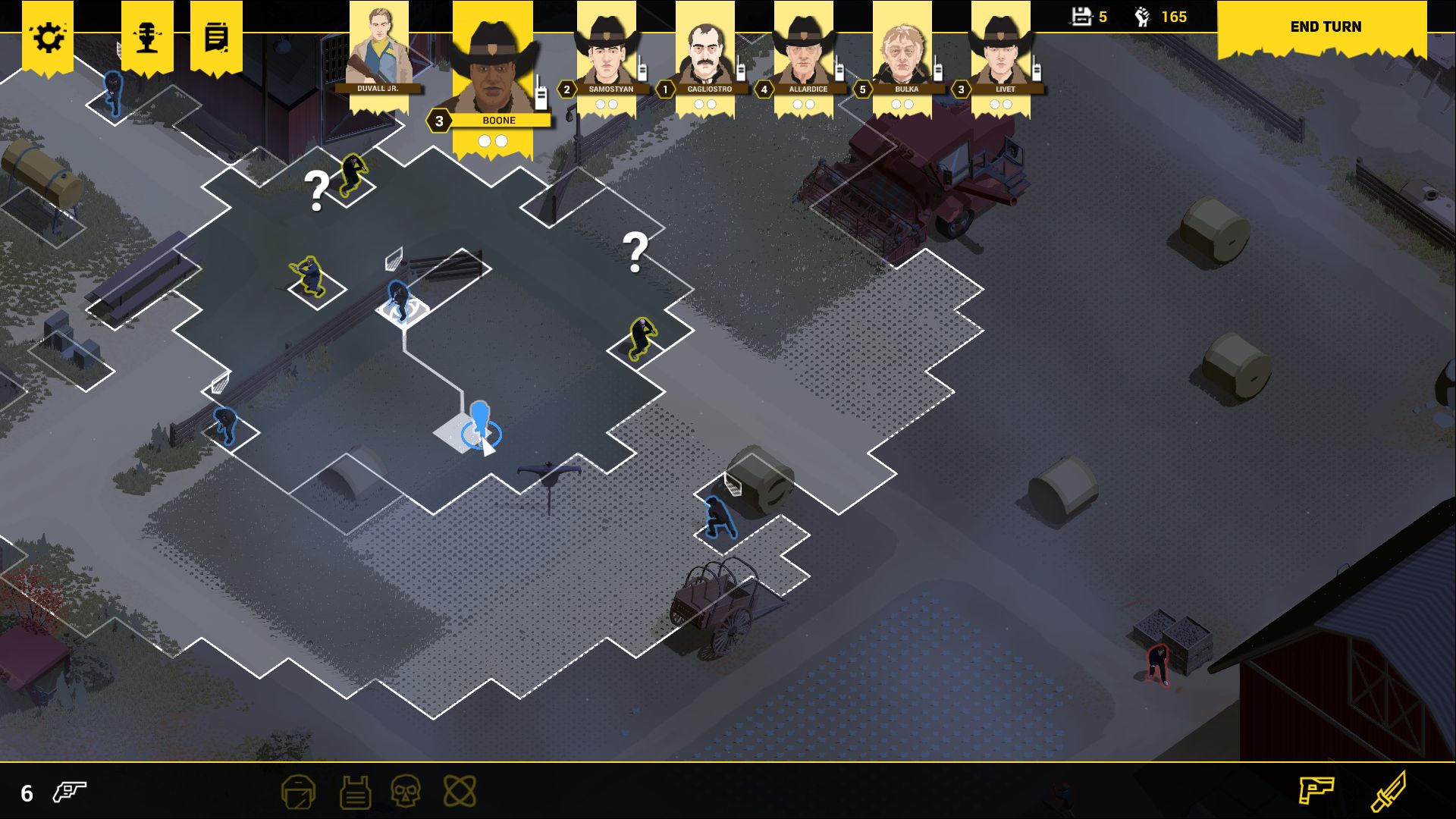 You'll see crooks who look straight at you, but from far enough away that they don't notice anything. Sometimes, this distance seems improbably small. Other times, they'll notice you, a question mark will appear above their heads, and they'll either investigate or stand still. I never managed to figure out exactly what determined whether my cops would be spotted or not, and I've got a suspicion there is no clear cut divide. The main fuel for that suspicion is the incident where I reloaded and foolishly moved a unit back to a position they'd been spotted from - but the second time round, the suspect's gaze passed right over them. It's all infuriatingly muddy.

For me to enjoy turn-based sneakery, I need more information. Naughty Police is a game where simply moving from A to B is riddled with uncertainty, and the cost of being spotted too often boils down to repetitive busywork. It's not a price I'm willing to pay.

Here, have my badge and gun.