In Ridealong we send Brendan into game worlds to meet the inhabitants that dwell within. This time, he introduces a professional comedian to the hecklers and horror of Comedy Night

“I hate this,” says Glenn. “What an absolute hellscape.”

Glenn Moore has been a comedian for years. He has written for TV and performed on panel show Mock The Week. Last year his Edinburgh Fringe performance won an award for ‘Best Debut Show’. But on this stage, none of that matters. Here, he is nervous and uncomfortable. It's hardly a surprise. He’s just had “n*****” shouted at him, over and over.

We’re playing Comedy Night. This is a game in which players take to the spotlight in a small room and perform comedy routines or songs to the rest of the audience. It all takes place online, so each big-headed cartoon avatar in the seats is a real human sitting at home, waiting for their turn to tell jokes. Imagine a chat room where each person’s voice has a “microphone” effect for a limited time. In theory, Comedy Night is a space for wannabe comics and performers to hone their acts. In practice, most of the 12-person rooms are repugnant shouting matches between anonymous bobble-heads. 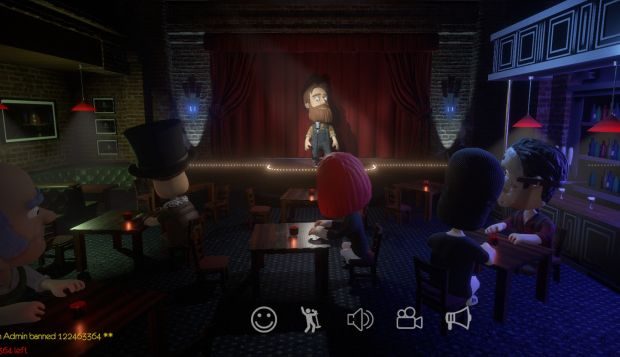 Glenn isn’t a complete stranger to games, but he isn’t a dyed-in-the-wool PC gamer either. (“I’m a shop-bought traditionalist,” he says at one point). I get him to install the game. At first, he thinks it’s going to be some kind of turn-based role-playing game (“Like FIFA’s journey mode or something”). He doesn’t realise it’s a stage with live speaking between players. A kind of open mic night for the detritus of humanity. When he finally does enter one of the servers, to scout it out as a silent audience member, he understands the full weight of what he has agreed to do.

“This game is so utterly bizarre,” he says. “I’ve never done stand-up just sitting at a desk before.”

We enter a room together on the American server. To get on-stage, you have to click a small “perform” button. This adds you to a line-up of people who want to stand under the spotlight. There are emote buttons too. Some clap, others cause your character to shake their head and boo. Some buttons raise a whooping fist in the air, others yawn or whistle. There’s even keys mapped to each of your eyebrows, allowing you to form expressions while on stage. 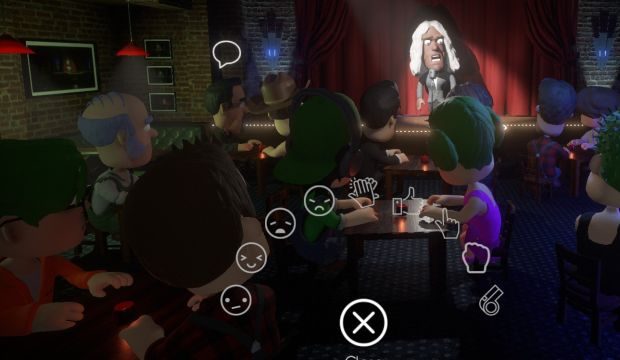 In these ways, you're supposed to be able to judge the emotional response of the crowd, to “read” the room, and respond to it in kind. But the emotes are the least of a would-be stand-ups worries. Heckling is not only commonplace but customary. You can turn "audience noise" off in the options, but this just means you won't hear your abusers while on stage. Everyone else still does.

You can opt to leave the stage at any moment. Failing that, you may be booted back to your seat by the room’s admin for not soliciting enough laughs, or simply because they do not want you there. Anyone can create their own room, so becoming an admin just comes down to whoever arrived in the bar first.

The bar Glenn and I are sitting in is called the “French learning room”. We soon learn why. It’s a jibe at the French woman who has taken to the stage and is offering to translate whatever the audience recommends into French. It isn’t clear if this is part of a routine or just a sideways approach to the problem of suddenly being in front of a dozen people. Whatever the case, it’s hard to hear her over the sound of the audience yelling. 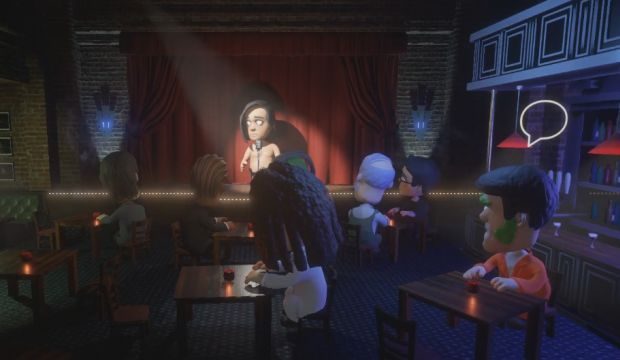 The loudest man in the room, sporting green sideburns and a prison jumpsuit, is demanding that she translate the most offensive things he can think up.

He slows down, gets louder.

The French woman is kicked from the stage.

Glenn sits in the front row, waiting. His avatar is more or less a representation of himself. Glasses, wavy hair, a neat suit and tie. You can't emote sweat in Comedy Night, but if you could, I get the impression Glenn would be glistening.

Eventually, it’s his turn. He takes the stage. 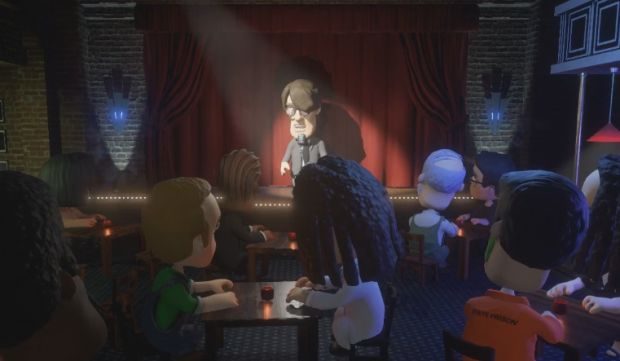 The speech bubbles above the heads of several audience members light up. 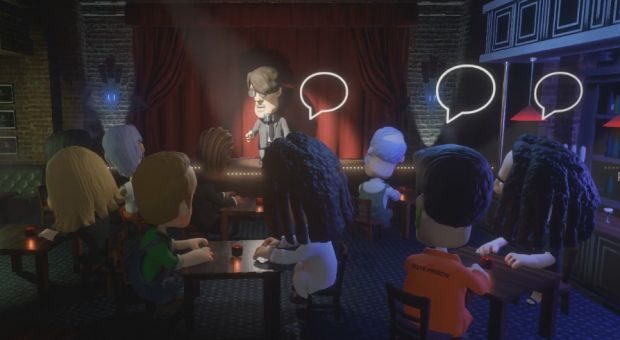 They begin to talk loudly over Glenn and each other. The slurs continue and, if anything, increase. I can’t hear any of the jokes, so drowned are they in chatter and abuse. The prisoner with green sideburns simply repeats his racist catchphrase over and over, not caring that it too is almost drowned out by the noise of other hecklers. After just 58 seconds of inaudible jokes, Glenn is kicked off the stage by the administrator – a blonde, lipstick-wearing Luigi called ‘Cucking Funt’.

“Sorry,” says Funt, “I’m the only British guy allowed in this room.”

He pauses briefly, then adds:

A man wearing a white suit, with long hair and a beard, takes the stage. He silently wiggles his eyebrows. 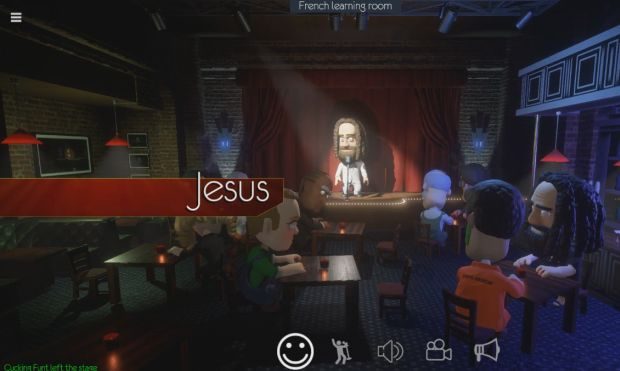 “I hate this,” says Glenn. “What an absolute hellscape.”

I've called him to ask how he thinks the first show went.

“What the hell is this game?” he says. “That’s amongst the most uncomfortable I’ve ever felt… I’m trying to think what on earth it could possibly be like.”

He thinks on it.

“The hardest thing in comedy is starting out... and when you’re starting out you’ll do any gig you possibly can just to get a few minutes of stage time. Sometimes that involves just going on stage in the corner of a pub where no one’s listening, one of those gigs where anyone can perform, and the person who’s gone up before you is this insane racist and they’ve really ruined the mood of the room, and everyone feels uncomfortable... That is, I guess, vaguely similar. But this is just… I experienced more stage fright just then than I have done on TV or in front of the biggest audience… It was just crazy.”

The developers of Comedy Night sell it as a harsh place to prove your comic worth. There’s even a mode in which you compete with another player, two of you taking up the stage at once, trying to talk over one another. Each audience member can mark you with a loud, buzzing ‘X’ if they judge your jokes to be awful. Three strikes and you’re out, leaving the other comic as winner. 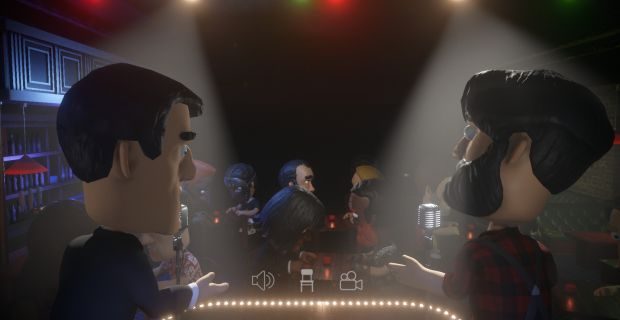 “If you are an aspiring comedian,” says the blurb from Lighthouse Games, “this is a great sandbox to try out new material and perfect your show.”

I ask Glenn if he thinks that’s good advice.

“That game is not in any way going to be used for the purpose it was intended for,” he says. “It just seemed to be this insane, far-right racist forum, with people goading French girls to say the N-word. I’ve just never seen anything like that. It was absolute insanity...

“If anyone is considering going into stand-up and that is something that’s brought up as an option, I cannot stress how little comedy is like that… That was the worst gig I’ve ever had right there.

“Shall we go back on and try it one more time?” 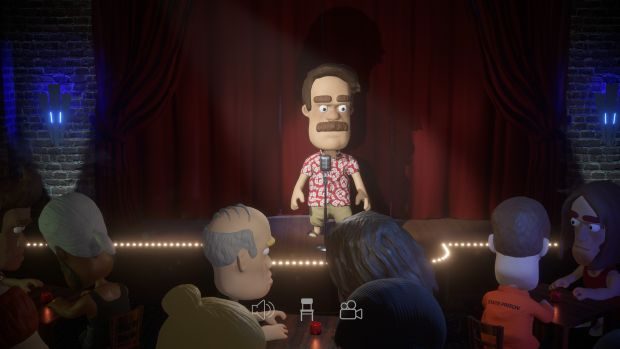 The second room we enter is titled “The Hiroshima Memorial Service”. The toxic atmosphere hits us almost immediately.

After waiting for his turn, Glenn gets on stage again. For this set, he’s decided not to waste any time with introductions.

“Hey, my grandma is an Elvis impersona--

He vanishes. Just seven words into his routine, Glenn has been not only kicked off the stage but banned from the room. It’s probably a relief, because all subsequent routines have picked up on the grandparents theme and degenerated into sexually explicit non-jokes about grandmothers. A man with dreadlocks called Fetus Fajitas goes on stage and gives a weary sigh. 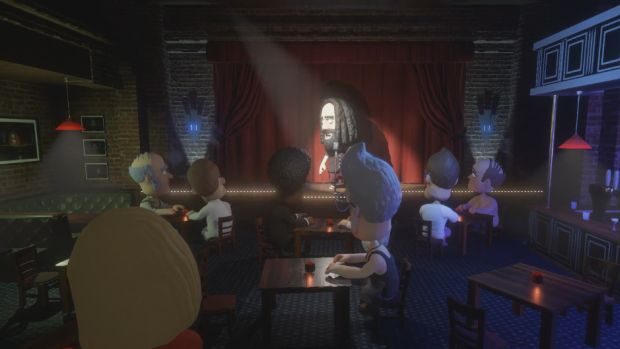 I’m out of the room before the sound of the second guitar string.

As we search for a new club, Glenn tells me he has a new tactic. He’s going to try and blurt out five of the shortest jokes he can.

“After the first couple [of sets] I realised that everyone’s got such a minimal attention span,” he says. “I just needed to say the very very shortest jokes I could think of. If anyone tried to launch into a story or something it’d just be unbearable.” 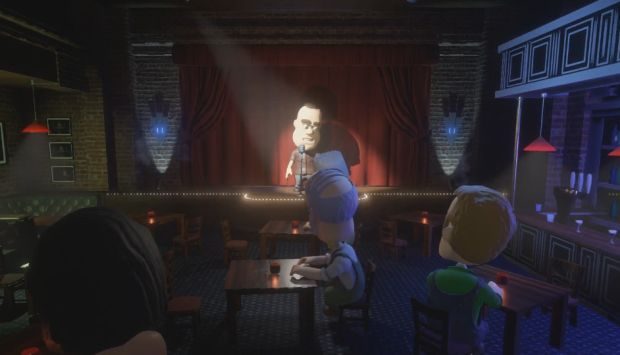 “Did you hear about the restaurant on the moon?” says Papa John. “The food is great but there’s just no atmosphere.”

The French woman from earlier cheers at this joke. She's in here too. The room fills up after a few minutes. The line-up at the side of the screen is now packed. Seven people want to go on stage and the crowd is beginning to boo and heckle the pizza magnate and his dad-like two-liners. Finally, the admin concedes and lets the others perform, stepping in between them as a kind of master of ceremonies. After many brief performances, Glenn gets up for a final set.

“I lost a court case battle against a popular frabric softener,” he says. “I fought Lenor and Lenor won.”

He manages to get two more jokes off without any heckling before being bounced by Papa John. It’s as much as either of us can handle. 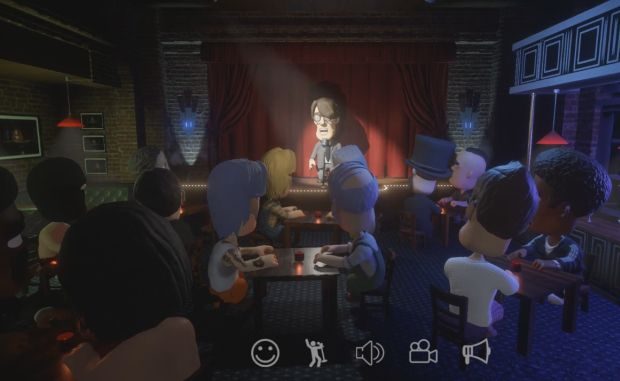 “That was a more normal,” he says afterwards. “It followed the structure of… normal people. The guy who was just telling really old jokes - he was functioning quite well as a compère. He was giving the show some kind of structure by coming on between each person, and it wasn’t just some crazy alt-right rally.

“Because it had a performative element to it. People were kind of performing… but before that it was, like, oh my god... It felt like just a huge internet forum, one of those 2003-2004 unregulated internet forums.”

Glenn may have been able to get a few jokes out of his mouth in the end, but he stands by the opinion that this isn’t useful to any younger comic hoping to sharpen their wit or improve their delivery.

“It’s unbelievably unhelpful for anyone who wants to be able to give it a go. It’s so much more terrifying than what a normal comedy night would be... My god, if someone can conquer that room, then they can play Wembley.” 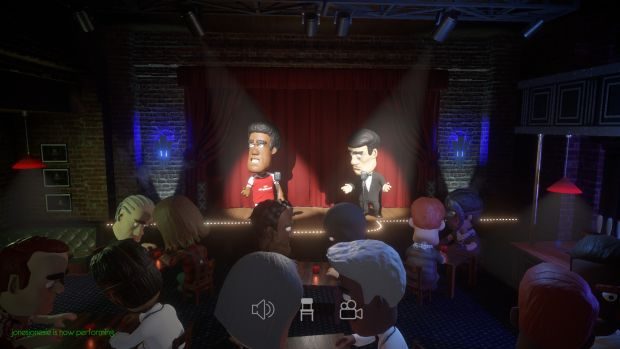 To Glenn, it isn’t only a bad way to practice. Comedy Night is essentially a set of lawless rooms on the internet where everyone has a microphone and is told to be “funny”. The degenerative offensiveness you see in this game is inevitable, no matter how well-meaning the intent.

“It is absolutely begging to be abused… It’s open to so much mischief that of course people are not going to play by the rules. In an actual comedy night, a heckler... will always be someone who sits at the very back of the room, where they know the lights aren’t on them. And they do this without fear of repercussions because they’re sat so far back. This [game] is sort of the ultimate cowardice of hecklers. You can go on this and you can, with complete impunity, yell under the guise of an avatar, and just say whatever the hell you want. Of course that’s going to be abused.”