After testing dozens upon dozens of mechanical gaming keyboards based around Cherry's admittedly excellent MX switches, the new and very non-Cherry MX-based Roccat Vulcan is a breath of fresh air. Employing the company's brand-new Titan switches (or Titan Switch Tactile to give them their full and proper name), the Vulcan offers fast and precise, tactile feedback for typing and gaming alike, and looks pretty damn smart to boot. Here's wot I think.

Before I begin, I should note the Vulcan actually comes in three different flavours. There's the top-end Vulcan 120 I've got on test here, the Vulcan 100 and Vulcan 80. Fundamentally, they're all the same keyboard, with exactly the same aluminium chassis and exactly the same switches. The only differences are the extra features they come with.

With the Vulcan 120, for example, you get a bundled wrist rest that simply slots in via a set of magnets, per-key RGB lighting, a rather lovely tactile volume knob and additional media keys, while the Vulcan 100 gets you everything I've just described minus the wrist rest. The Vulcan 80, on the other hand, is just your basic keyboard. No wrist rest, no RGB lighting, no media wheel or additional media keys; just a plain, blue LED backlight and a black aluminium chassis instead of brushed silver.

Personally, I could probably do without the wrist rest, although it almost seems silly to not go for it when it's only another tenner on top. I'd also be happy to lose the additional media keys. After all, you only really get a mute button and a choice between using the knob for volume or adjusting the brightness of the keyboard's LEDs, so it's not like you're missing out on any play, pause or skip buttons as a result.

I would be sorry indeed to lose the volume knob entirely, though, especially when the Vulcan's is so damn gorgeous and clicky and lovely to use. In truth, I could probably do with it being situated a touch higher, as its current position feels just a little too snug against the top row of the number pad, but on the whole it's relatively small complaint. Either way, when all of them are priced so closely together, it hopefully shouldn't be too difficult to work out which one best suits your needs and budget.

As for the keyboard itself, it's a real beaut, and that's largely down to Roccat's fantastic Titan switches. The closest Cherry analogue is probably their MX Brown switches, but while the Vulcan's Titan switches are indeed of the clicker, bumpier variety as opposed to simply going straight up and down when you press them, there's also a certain nippiness about them that makes them feel like a cross between Cherry's MX Browns and their linear MX Reds.

Indeed, Roccat claim the Titan's actuation point (the moment when the keyboard actually recognises a key has been pressed) is just 1.8mm compared to the 2.0mm you'll find on Cherry's MX Browns and Reds, while their total travel distance is a short 3.6mm over Cherry's 4.0mm, so they are, in fact, faster on every count. They're still not as quick as Cherry's MX Speed Silvers, whose actuation point and travel distance are a minuscule 1.2mm and 3.4mm respectively, but they're certainly getting there.

Admittedly, I think you'd have to have very deft fingers indeed to actually tell the difference between those extra tenths of a millimeter, but the end result is undeniable. Regardless of whether you're gaming or typing at speed, the Roccat Vulcan is one of the tightest and most responsive keyboards I've used in quite some time, providing enough tactile feedback for regular desktop tasks while also being fast and nimble enough for rapid-paced action games, offering the best of both worlds without, it seems, suffering any kind of compromise.

More importantly, they don't make a massive racket, either. They're probably still a touch unfriendly for prolonged use within earshot of other human beings - especially if you're working on a document, for example, where the CLACKEDY CLACK is going to be swift and constant - but for gaming, I reckon you might just be able to get away with it if your PC happens to live somewhere communal as opposed to your study or bedroom.

I do worry about stuff getting stuck between its slimline key caps, though, whether it's crumbs from a cheeky snack or the endless tufts of cat hair that always tend to congregate around my desk when I'm not looking. The former aren't too difficult to remove thanks to the generous spacing between each key, but the latter often tend to stick rather stubbornly in said nooks and crannies no matter how much huffing or puffing I do or violent shakes I give it. This won't be a problem for non-pet owners, of course (unless you regularly shed your own hair while sitting at your desk), but it's something to bear in mind if you do. 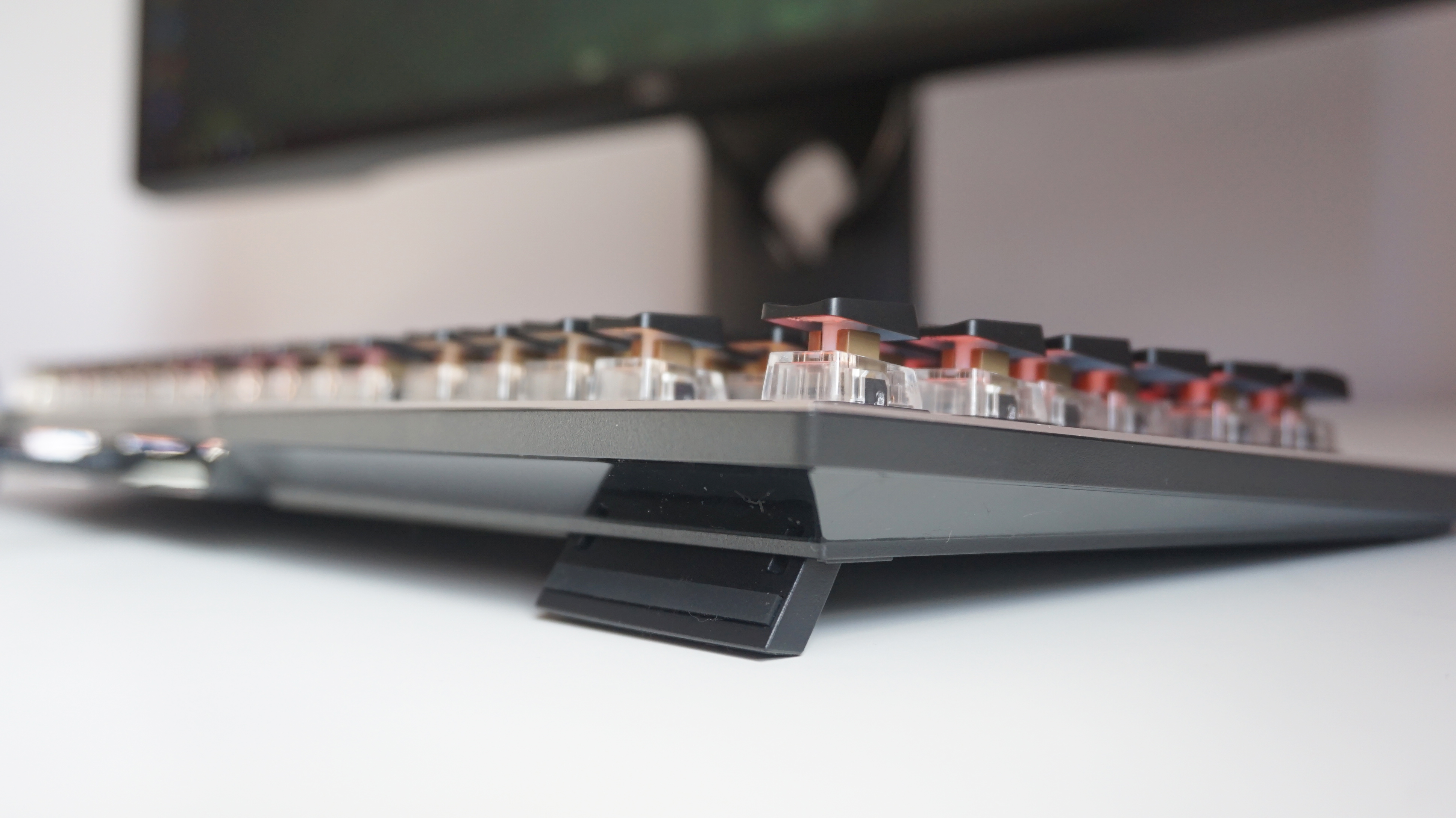 It may well be worth the risk if you're deep into your RGB appreciation, of course, as the translucent housing beneath each key cap allows each LED to shine through loud and clear. Out of the box, I was greeted by a red and orange colour scheme, but you can adjust each key exactly to your liking by downloading Roccat's Swarm software. Here, you can configure it to flash in all manner of pre-loaded themes, including Roccat's intelligent Aimo lighting profile that can supposedly react to the way you use each of Roccat's Aimo-enabled peripherals in some way (although I've yet to identify exactly how it does this), but you can also set your own custom themes across each of its four available profiles.

You can also use Swarm to program your own macros and reassign key commands across the entire keyboard. It's not particularly intuitive at first, as Roccat have for some reason gone with a kind of drag and drop system instead of something a bit easier to parse like a drop-down menu system, for example, but it's not too difficult to get to grips with once you've actually figured out how it works.

Indeed, the only real complaint I have about the Vulcan is its lack of USB passthrough for connecting up your mouse. It's the kind of feature I'd expect to see on a premium gaming keyboard like this, and its absence puts the Vulcan at a slight disadvantage compared to a lot of other similarly priced keyboards that do come with it and currently occupy a lot of the top spots on my current best gaming keyboard list. Personally, I'm more than happy to forego it given just how lovely it is to type on, but others may feel differently.

Still, if you've ever wished your fast mechanical keyboard offered a smidge more tactile feedback, then the Roccat Vulcan will not disappoint. With its outstanding build quality, gorgeous-feeling switches and flexible feature options, the Vulcan is by far one of my favourite gaming keyboards to date, and it joins the Fnatic Streak as my joint best gaming keyboard champion.