Fnatic probably means more to you as an esports team than a hardware manufacturer, but if you're after the world's thinnest RGB mechanical keyboard, then Fnatic's new Streak is the place to be. There's also the miniStreak for those who prefer something a bit more compact or can't remember the last time they touched their number pad, so this review will cover both of them at the same time.

Built from aluminium and measuring a mere 36mm thick, both the full-sized Streak and cut-down miniStreak are surprisingly tasteful as far as keyboard designs go, keeping esports and gamer-fied flourishes to an absolute minimum. There's a small Fnatic logo on the space bar, a 'competition' key with Fnatic's logo on it in the top right corner, plus a Fnatic RGB header plate on the very top of the keyboard that you can't actually see, but that's pretty much your lot. Otherwise, you're looking at a fairly plain type of keyboard that you probably wouldn't be too embarrassed to have on your desk.

Available with red, silent red, blue and brown Cherry MX switches, both keyboards should feel fairly familiar to mechanical keyboard veterans. My particular review samples came with brown Cherry MX switches, which are (according to general wisdom) meant to provide a sort of halfway house between the sharp and fast red switches that are better for gaming, and the clacky clack blue switches that are better for typing. 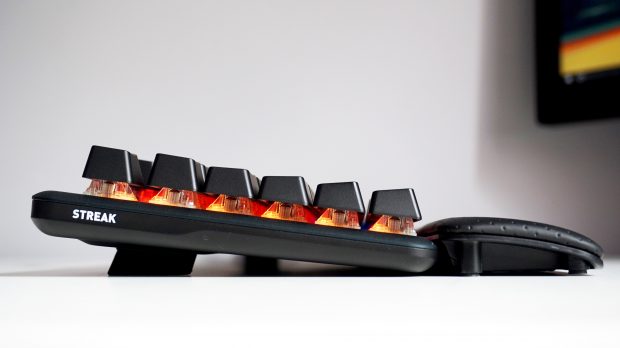 Brown switches are also characterised by having an extra little click or bump when you push them down, providing a bit more resistance than the clean, smooth actions you'll find with red and blue switches, but they feel more tactile as a result. It's not really an audible extra click per se; it's just like there are two stages to each button press.

Personally, I barely even noticed this when I first started using the brothers Streak, and it was only with gentle, ginger prodding that the bump even became remotely obvious. As a result, it shouldn't make too much difference to your overall typing style, especially if you're coming straight from the soft, squidgy keystrokes of a membrane keyboard, and I was up and running at full typing speed in absolutely no time at all, both on the full-sized Streak and its miniature sibling.

Both felt great regardless of whether I was typing up long documents or playing games, and the soft, detachable faux leather wrist rest easily ranks up there with the MSI Vigor GK80's as one of the most comfortable I've ever used. In fact, it goes one better than the GK80, as both wrist rests can be extended to fit your hand size. Lift up the top plush bit and you'll find it detaches from the lower base that hooks into the Streak's underside, allowing you to re-position it in one of three magnetic grooves for maximum wrist coddling. This is much more practical than having it completely separate like the GK80, and it means I can move the whole keyboard around my desk without messing up my prime wrist-to-keyboard distance ratio. 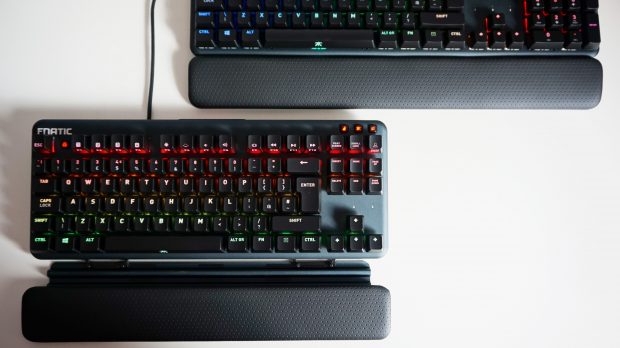 Of course, no matter how well designed they are, the one thing that can really put people off mechanical keyboards is the amount of noise they make. In my books, Cherry's brown MX switches are still pretty clacky as far as I'm concerned - I think words would be had if I started using them for hours of prolonged typing while my husband was watching TV or playing games in the next room, for instance - but they're probably the least irritating of the lot if you've never used them before. I certainly like them a lot more than other types of mechanical switches I've used in the past, and I'd agree that they probably provide the best of both worlds if you can't decide between red or blue.

There are a couple of key differences between the Streak and miniStreak that are worth pointing out, though, as the lack of number pad isn't the only thing that sets them apart. The full-sized Streak, for instance, supports USB passthrough, allowing you to connect your mouse into the back of the keyboard so you've got fewer wires going into the back of your PC. The miniStreak, meanwhile, doesn't have a USB port, but comes with a detachable USB cable that's USB to USB Type-C, making it much easier to replace than the Streak's integrated cable.

The miniStreak doesn't have the Streak's little volume roller knob either, as its compact frame simply doesn't allow for it. Instead, you'll find two volume control keys mapped to F7 and F8, giving you four programmable keys instead of the full six you'll find on the Streak. That said, as much as I like the convenience of having a volume knob, I do wish it was both just a bit bigger and a bit higher up on the full-sized Streak, as I was constantly hitting the tall number pad keys in front of it whenever I went to use it. 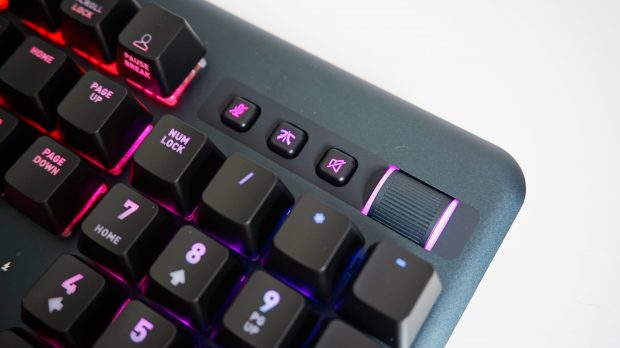 Otherwise, you're getting pretty much the same suite of additional controls, including mic and volume mute buttons, a Fn Lock key squeezed in between Esc and F1, media keys assigned to F10-12 and two RGB backlight keys on F7 and F8. There's also that aforementioned competition key on both boards, which changes the Streak and miniStreak's lighting to the company's trademark orange, disables the Windows key so you don't accidentally tap it and disrupt your game while aiming for Ctrl to crouch or something, and it also turns off the keyboard's macro recording and lighting modes.

If orange isn't your thing, you can always change it via Fnatic's OP software. There are nine lighting effects in total, ranging from your classic rainbow / specific colour options to swish in one of four directions across your keyboard, as well as rain, fade, reactive, wave and pulse to name just a few. I'd also recommend using OP to program those aforementioned Fn keys, as the alternative - holding down the competition key for five seconds - is much, much fussier.

A few kinks aside, both Fnatic's Streak and miniStreak make a strong impression. Their plain design and rounded edges are much more pleasing to the eye than the sharp corners and brushed hairlines finishes on other mechanical keyboards I've used in the past such as the HyperX Alloy Elite and Corsair K70 Lux RGB, and their super comfy, flexible wrist rests almost warrant an immediate recommendation in and of themselves.

There are also plenty of RGB options to keep LED fans happy, and the best thing is they only cost £90 / $100 and £120 / $130 respectively, making them a lot cheaper than many of their rivals and worthy of our best gaming keyboard crown.