As much as I loved the Asus ROG Claymore when I tested it at the end of last year, there's still a very large part of me that balks at the idea of spending £150 on a mechanical keyboard. After years of being perfectly happy with admittedly terrible plastic membrane concoctions, it's hard to let go.

The Corsair K70 Lux RGB isn't any less expensive at roughly £145 or $170, but at least this one doesn't charge you an extra £50 for a number pad, making it better value overall for those looking to make the jump. Can it break into our best gaming keyboard rankings? Let's take a look.

Available with several different types of Cherry MX switches, the K70 Lux RGB comes in the clacky clacky red variety that's better for gaming, an even clackier blue model that's better suited to typing, a quieter, more balanced brown type that's something of a halfway house between the two, plus a fast, esportsy Speed version and the definitely not Silent type I've got on test here today.

To Corsair's credit, the Silent MX switches on my particular test sample are certainly less grating on the ears than the Claymore's red Cherry MX switches, but they're still not so quiet that you'll escape having something lobbed at your head if you use them within a ten foot radius of another human being. In the end, the 'silent' version of the K70 Lux RGB is just as antisocial as your typical mechanical keyboard, and is thus best confined to a bedroom or attic far beyond the realms of human hearing. 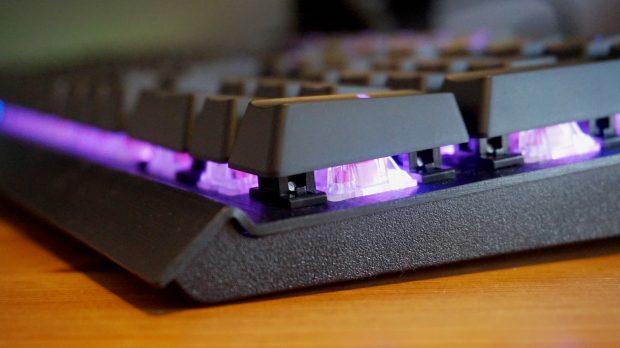 Even when used in isolation, though, I wasn't actually that fond of the Silent switches, at least for everyday typing. While they still felt more precise than the squishy membrane keyboards I've used in the past, they didn't feel nearly as clean-cut as the traditional red switches on the Claymore. You might even say they were a tad... spongy.

I admit that's a strange criticism to level at a mechanical keyboard, whose individual springs and switches are about as far away from the single, bubble-wrap style sheet of contact domes you'll find inside an ordinary membrane keyboard, but at no point did I ever feel truly at home with it. I normally adapt pretty fast to whatever piece of typing plastic is in front of me, but in this case I was still making mistakes and hitting keys incorrectly even after several days use, and every moment I spent with the K70 Lux just made me wish I was back using the Claymore again.

Admittedly, that hankering for Asus' compact miracle board practically disappeared when I tried the K70 Lux RGB with a few games, and I'd be hard-pushed to say which one I preferred when zipping round Doom's UAC facilities or blasting through hordes of Nazis in Wolfenstein II. Indeed, any inherent squishiness in the K70 Lux's Silent keys never became a problem in busy combat zones, and I actually did come to appreciate their muted clackety clack clacks when I had the game's soundtrack playing through a normal pair of speakers instead of a headset.

Of course, without testing all the other types of switches available for the K70 Lux RGB, it's hard to say whether any of those would be a better fit for both typing and gaming. This makes it doubly difficult when it comes to pitting it against Asus' red switch Claymore, but at least Corsair's effort comes with a lot of extras to help sweeten the deal. 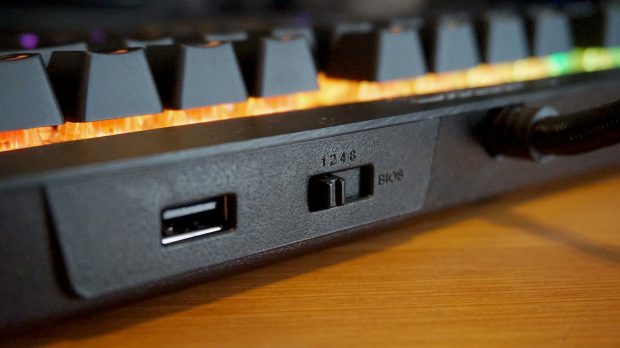 For starters, there's a USB port on the rear of the board for a mouse, USB headset or wireless headset adaptor - something the Claymore is decidedly lacking in its bid to keep its footprint as small as possible - and there's even a slider that lets you adjust the keyboard's polling rate (how often your PC asks for data) right next to it. This goes from 1ms (1000Hz) all the way up to 8ms (125Hz).

Polling rate options are normally confined to mice (which even then make naff all difference unless you've got faster reflexes than a ninja-trained housefly), but here Corsair says it's meant to help cut down on keystroke latency. Again, unless you regularly touch-type at 100mph, it's unlikely to make much of an impact on your typing accuracy.

Perceived wisdom suggests that it may (and that's a big, doubtful 'may') improve its compatibility with slightly older systems - much like the BIOS mode tacked on to the end of the slider that turns the keyboard into a regular 104-key board and disables its suite of media keys, RGB lightshow options and the Windows lock key - but why you'd buy this keyboard for (or even own) such a system in the first place is anyone's guess. Still, at least there's some built-in flexibility for the handful of people that fulfill this very specific use case. 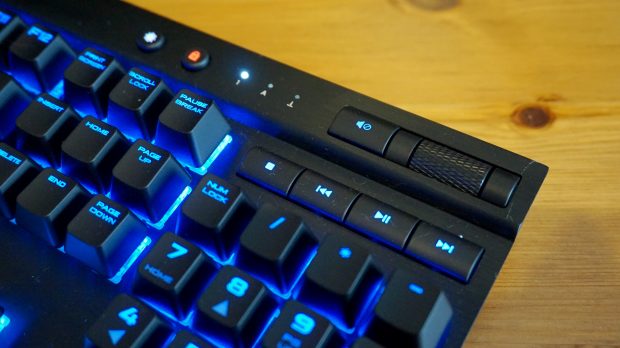 Infinitely more useful are the two batches of replacement key caps (WASD and QWERDF) with grey, textured grips and those aforementioned media keys. You also get a dedicated volume roller and an RGB brightness button that increases the speed of whatever lighting effect you've currently got enabled in Corsair's Utility Engine (Cue) software. And while we're on the subject of Cue, you can also use this to record your own macros and decide what button combos are disabled when Win Lock is turned on.

The K70 Lux is also arguably one of the least 'gamey' looking keyboards around. Rainbow RGBs aside, its plain, brushed aluminium frame is pleasingly free of any gaudy sci-fi designs or try-hard 'gamer' branding, and the soft-touch detachable wrist rest is also exceedingly comfy. Without it, typing became even more of a chore, as the four fold-out feet on the K70 Lux's underside either made the base feel like it was teetering on stilts when they were all extended, or far too low on the ground when the bottom pair weren't in use. Only when the wrist rest was attached did the keyboard feel the right height.

In the end, though, I'd probably still pick the Asus ROG Claymore over the silent K70 Lux RGB. The Claymore's both more comfortable and easier for me to use regardless or whether I'm gaming or not, and I like how small it is despite the fact it costs you any chance of a USB port.

That's not to say you should rule out Corsair's board completely, however. It's still perfectly good for playing games and if you're not fussed about the RGB effects or having your lighting schemes sync across other compatible Corsair goodies you might own, you can save yourself another big chunk of change by opting for one of the regular K70 Lux models that only have a basic solid red or blue LED backlight. These are currently going for just over £100/$100 and are practically identical to their RGB counterparts in every way save for their multi-coloured light options. That's a much more palatable price than the sans-number pad Claymore, and you still get the same great build quality, extra key caps, wrist rest and USB port.