Time to own up. Before now, I’ve never actually used a mechanical keyboard. For a time I used one of Roccat’s giant, spongy Isku gaming keyboards, mostly because that happened to be the one sitting on my desk when I started my first job, but in that same job, I soon began a long-lasting, if slightly unhealthy, relationship with one of Microsoft’s basic wireless keyboard sets. I know, I should probably hand in my RPS badge right now.

I had good reason, though. I promise. It was quiet, the keys weren’t too squishy, and it was pretty comfortable for the amount of time I spent typing everyday. Yes, it had a bit of trouble playing games - nervous, first person platforming manoeuvres definitely weren’t its forte - but when it’s your only option in the office, you make do. I’ve moved on since then, both in terms of job and keyboard, but if using the world’s worst bit of typing plastic has taught me anything, it’s that you learn to adjust to what’s in front of you. And right now, that’s the rainbow-coloured Asus ROG Claymore.

The price alone will probably make most people mash their teeth (and respective keyboards) in horror. £150 for the main board and an extra £50 for the detachable number pad? I can barely stomach the idea of paying more than £30 for a keyboard, let alone five times that amount.

Of course, even I have to admit the Claymore’s build quality is quite a step up from what I’m used to. Whatever your feelings are regarding Asus’ slightly try-hard, space age typography here, the lightly patterned aluminium-alloy frame cuts a smart profile on your desk, and its compact size belies a surprising amount of heft. The braided USB cable is also fully detachable, so it’s easy to replace if, like me, you happen to have have a pair of cats with a taste for PC wires.

Then there are those rainbow-coloured mechanical keys. Jeremy's already discussed the highs and lows of owning a mechanical keyboard, but just to recap, mechanical keyboards get their name from the individual springs and switches underneath each key - and you can read more about all the kinds of switches in our best gaming keyboard guide. 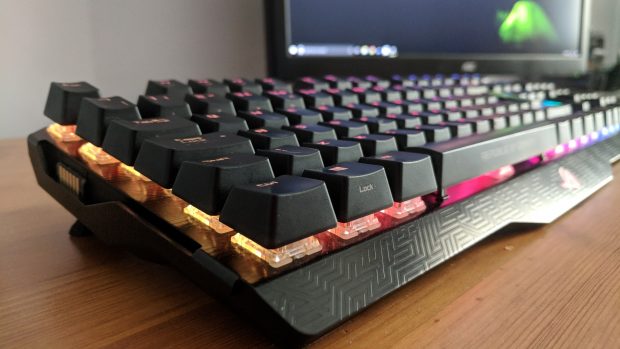 Your regular old Microsoft keyboard, on the other hand, just has a single plastic sheet inside it pocked with dozens of little contact domes - a bit like bubble wrap - connected to a circuit board. They’re cheaper and easier to make, but when something goes wrong you usually have to throw the whole thing out. By contrast, mechanical keyboards are generally more durable and if something goes wrong, you only have to replace the affected switches - although you’ll still need to be confident with a soldering iron if you want to do it on your own.

The only real problem with having mechanical switches is that they’re incredibly noisy, and I mean a Wolfenstein gatling gun kind of noisy. You can get switches that are quieter than others, but my particular Claymore sample came with Cherry’s ‘red’ type of MX switch, which, to my ears, produces one of the most anti-social CLACKETY CLACK CLACKs I’ve ever heard. It’s tolerable when I’m alone in my own office, but when I’m using the living room PC and my partner’s trying to watch TV, it becomes more obnoxious than a dripping tap.

To Asus' credit, the Claymore does come in other switch colours. This includes the even louder, better-for-general-typing ‘blue’ switches, the heavy, slightly quieter ‘black’ switches, and the generally more balanced ‘brown’ switches that are considered a nice halfway house between work and play. But this is still going to be a keyboard best used in isolation if you want to maintain healthy relationships with the rest of your household. 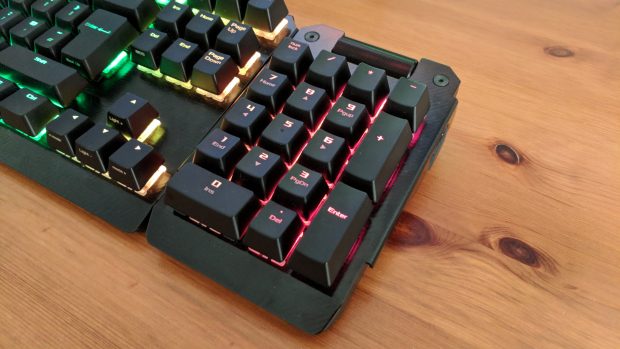 The number pad is entirely optional - a good thing, too, when it costs another £50

For all my objections about the noise, though, I’ve grown quite fond of the Claymore. The hundreds of RGB light configurations are maybe a bit much, but its precise, clean-cut movements made general typing really quite comfortable, and in-game actions were instilled with a weird sense of decisiveness. Why, yes, I will pull that lever, and I will do so with THE POWER OF A THOUSAND STRONGMEN.

It took a little bit of getting used to, I won’t deny it. After years of rummaging around on low-rise laptop keys, the sheer height of each Claymore switch often felt like my fingers were reaching up to type on pedestals. I adapted pretty quickly, though, and typing and lever-pulling on my old keyboard - another Isku I bought years later - now just feels a bit sad and limp, like poor old B.J. Blazkowicz at the beginning of Wolfenstein II.

As much as I like the Claymore, however, there’s still the small matter of it costing £150. You don’t get any extras with that, either, such as USB ports, a wrist rest or a headphone and microphone jack. There are programmable macro keys, on the fly macro recording, and you can sync your colour scheme to match your Asus ROG motherboard and mouse if you’re into that kind of thing, but I’d take another couple of USB ports over all that any day. 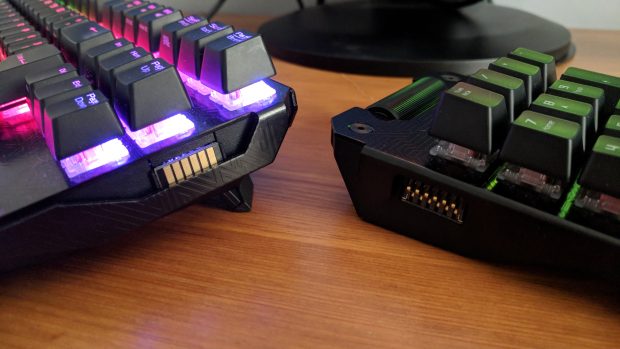 The optional number pad does come with a rather gorgeous metal volume knob that I could just roll up and down all day, but when you’ve already got a full array of multimedia keys mapped to the function buttons on the main keyboard, it does feel a bit superfluous. Don't get me wrong, that slider is infinitely more satisfying to the touch than tapping a bunch of multimedia keys, but I draw the line at paying another £50 for the privilege. It’s worth noting that you can also attach the number pad to either side of the keyboard thanks to a pair of simple slot mechanisms, but unless you really feel the need to have an ambidextrous number pad, I’d give it a miss.

There’s no denying the Claymore’s a great keyboard, but there are definitely cheaper options out there. Alec described a near identical conversion to mechanical keyboards after buying Razer’s Blackwidow Ultimate, which costs £110, and you can save even more money by opting for one that doesn’t pulsate with all the colours of the rainbow. If the Claymore does take your fancy, though, it might be wise to wait a few weeks until Black Friday, as you may be able to pick one up on the cheap depending on what deals are available. If you’ve got the money to spare, though, then the ROG Claymore won’t disappoint.